‘The Nederlands will really need a thorium reactor’

According to Jan-Leen Kloosterman, the Netherlands needs nuclear power to reduce CO2 emissions. Last summer, he led a conference in Delft on a new type of nuclear reactor: the thorium reactor. The professor of reactor physics thinks the Netherlands should invest in a prototype. 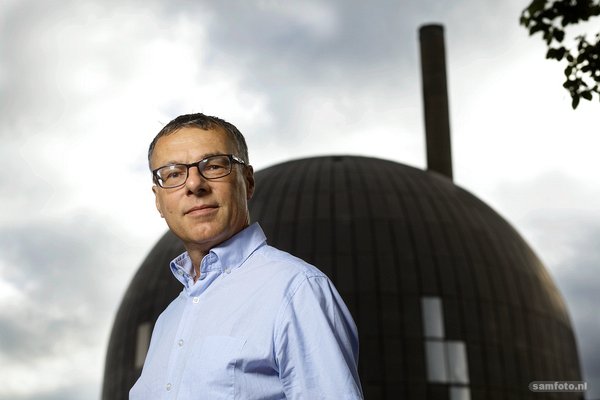 Nuclear power is a thorny issue in Europe. Germany turned away from nuclear energy after Fukushima, but its use of coal-powered plants has led to a rise in carbon emissions. France sees no problem using nuclear power, but its reactors are a half a century old. And the joint problem of everlasting nuclear waste is passed on to future generations.

So you’d think there's every reason for Europe-wide development of safer nuclear reactors and solutions for nuclear waste. But that’s not how it works, explains Jan-Leen Kloosterman, Professor of Reactor Technology at the Faculty of Applied Sciences and leader of European research programmes on nuclear energy: “There’s not much research funding for nuclear fission in Europe.”

Europe is investing strongly in the ITER experimental fusion reactor with a budget of at least 20 billion euros, but none of that money is available for a prototype Molten Salt Fast Reactor (MSFR).

Why? EU research funds may not initiate research lines themselves, but follow investments of member states. This is why Kloosterman feels the Netherlands should invest €200 million in a prototype thorium reactor (see box).

Kloosterman calculated that to achieve the desired carbon-free electricity supply by 2050, the Netherlands needs to get around 10 percent of its electricity from nuclear power. Nuclear power would be the basis supply, supplemented by solar and wind energy as available. “The government seems to be putting all its trust in sun and wind”, says Kloosterman. “Or they aren’t taking their own climate policy seriously, and are keeping fossil-fuel plants as back-up.” So according to him, to achieve a stable power supply without fossil fuels, the question is will we stick with the existing reactor technology, or develop something better?

All the researchers who visited Delft last July for the conclusion of the Samofar research programme (Safety Assessment of Molten Fast Reactor, 2015-2019) are convinced that the thorium reactor is a better choice (see box). As chair of the programme, Kloosterman feels that much was accomplished, given the limited budget of around 4 million euros.

The research will continue in the next EU research programme, Samosafer (2019-2023). The plan is to develop physical models for melting and solidifying salt (the heat transporter in the reactor), for the radiant heat released, and for the design of the freeze plug that acts as a safety valve should the reactor overheat. The plug would then melt and the molten salt drain out of the reactor core, stopping the nuclear reaction.

The end product of the research, that has been running since 2010, is a complete software package that simulates the reactor in great detail, particularly under extreme conditions to guarantee the safety at all times.

Both Kloosterman and Dr Danny Lathouwers (who led the research on potential accidents with the MSFR) feel that when the project ends in four years, it will be high time for practical research.

Just like the researchers in the SINAP laboratory in Shanghai, they want to build a small prototype MSFR, at an estimated cost of €200 million.

Isn't that a lot of money for a small country? Kloosterman doesn't think so, and points to Belgium that is investing € 500 million for its special Myrrha reactor that is suitable for splitting long-lived nuclear waste.

If the government decides to support the development of a thorium reactor, he thinks a small prototype could be ready by 2030. A rough timeline could then be: a demonstration reactor by 2040 and a European commercial thorium reactor operational by 2050. This would then probably be just what is needed to stabilise the electricity grid.

At the heart of the design is a Molten Salt Fast Reactor (MSFR). This is a highly modified design of the reactor that ran for thousands of hours in the 1960s in the Oak Ridge Lab in the USA. In the modernised French design, the core of the reactor is a two-metre high and wide steel cylinder filled with molten salt and uranium (U-233) as fissile fuel. The heat produced in the reactor (around 750 degrees Celsius) is carried by heat exchangers to steam turbines (to generate electricity).

In the CNRS (Centre National de la Recherche Scientifique) design, the reactor functions at ambient pressure, so there is no risk of explosion. Thorium itself is not a fissile material, but when bombarded with neutrons, it transmutes to U-233, which is a fissile material. So fissile fuel is bred from thorium on the outside of the reactor.

Fission products (poisons) are continually removed from the molten salt. After ten years, most of these are hardly radioactive any longer, and a small amount (around 20%) needs to be stored for 300 years. Compare this to the geological storage facilities needed for the current nuclear waste.