TU Delft researchers separate microparticles on the basis of their shape

Scientists in Delft have developed a technique for selectively separating microparticles in a liquid on the basis of their shape. The technique calculates precisely the path that a specifically shaped microparticle will follow in a flow through a narrow tube. This makes it possible to set up a sorting channel, in which the differently shaped particles each find their own way. The new technique, which was published today in the journal PNAS, can be used in a range of sectors, for example in the manufacture of medicines or removing microplastics from water.

There are countless examples of microparticles suspended in liquids, such as the red blood cells in our blood, bacteria in drinking water and microplastics in the wastewater from the washing machine. If we want to filter these particles out of the liquid, we can do this on the basis of their size using a sieve. However, in some processes it is essential to separate particles that are the same size but have a different shape.

Up to now, this has only been possible using an external source such as a light, magnetic or electric field. This requires cumbersome equipment, and the microparticles cannot always be separated using these external sources. One example is the manufacture of medicines. It is important that the final product only contains the desired crystal structures so that the medicine can work the way it is intended. Principle investigator H. Burak Eral: “During the production process, tiny variations can trigger formation of undesired crystal forms with distinct shapes and structure, that are of the same size as desired ones . This new technique makes it possible for us to remove the undesired, potentially harmful crystals from the liquid.”

The technique developed by researchers Rumen Georgiev and H. Burak Eral works solely on the basis of the forces exerted on the particles in the flow through a narrow tube, no wider than a human hair. The path that the particle will follow in the narrow tube can be precisely calculated using the developed formulas.

Earlier theoretical research conducted together with Utrecht University and the University of Hawaii showed that the asymmetrical particles flow in a particular way through a narrow tube. The team from Utrecht developed a simple but elegant theory for the movement in two dimensions. “Although the particles tumble in a complex manner and are swept along by the flow, it proved possible to make concrete theoretical predictions on the path they would follow”, says René van Roij from Utrecht University.

In Delft, Georgiev and Eral continued working on experiments, 3D simulations and the theory, to gain an in-depth understanding of the pattern of the microparticles. Georgiev made microparticles in various shapes to enable him to play with their properties. He repeatedly led the particles through the channel and made calculations based on the path they travelled. “We observed a bell-shaped pattern in the path, which each microparticle followed in a slightly different way according to its shape. By carrying out repeated experiments and computer simulations, we were eventually able to reduce this path to a universal formula in which the only variable is the shape of the particle.”

The formula can be used to calculate which path a microparticle with a certain shape will take. This even makes it possible to sort differently shaped particles in a liquid simultaneously by arranging the narrow tube as a motorway with different exits. Georgiev: “Every particle follows a similar path. The exact route of that path is determined solely by the shape of the particle. So particle A will arrive at one exit, while particle B will travel towards the other exit.”

This technique can be used in many fields, from medicine to wastewater treatment. Eral sees particular potential for developing minuscule labs on a chip and in separation technologies for industrial purposes. Eral: “One minuscule channel with various exits is all you need to remove specific microparticles from a liquid, for example the abnormally shaped red blood cells in sickle cell anaemia. The principle can also be used in larger scale production processes in the pharmaceuticals industry. It’s a fantastic outcome that the technique works on both a small and a large scale.” Eral and Georgiev will be continuing their work in Delft, researching and refining the separation technique to ensure it meets the practical needs of industry and can be widely used. 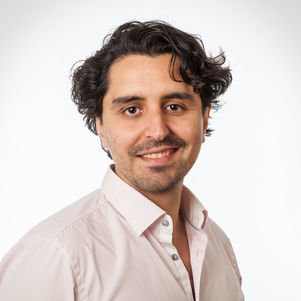