Virtual Reality (VR) is not just about gaming or flight simulators. At TU Delft, PhD Yan Feng is investigating how it may help explain the behaviour of pedestrians. It took her just five months to teach herself how to create a complex virtual building. By then she had built an exact replica of her faculty building and invited real people to explore and evacuate it. So how did they find their way around?

Feng is fascinated by the way pedestrians get from a to b and what motivates their choices along the way. Feng: ‘What information are pedestrians relying on? Are some markers more important than others? How do people scan their environment? That is the sort of knowledge that will provide an insight into pedestrian behaviour.’

The use of virtual reality (VR) and augmented reality (AR) for research purposes is still relatively new. For Feng, these technologies offer an opportunity to simulate real life situations, including potentially dangerous ones. At the same time her research will show to what extent VR & AR can be used to study pedestrian behaviour.

Feng found some 150 volunteers to navigate the virtual CEG building to study pedestrian wayfinding behaviour in multi-storey buildings. “We want to understand how pedestrians interact with the environment, and why they choose certain routes and exits.”

Participants roamed the virtual version, either kitted out with VR glasses or via a computer. Some of the participants are familiar with the building,others have to find their way without any knowledge regarding the building’s layout. At a later stage in the experiment Feng will recruit another group to perform a similar experiment in the physical building. ‘This will tell us whether or not VR provides a realistic image of pedestrian behaviour in  real-life situations. 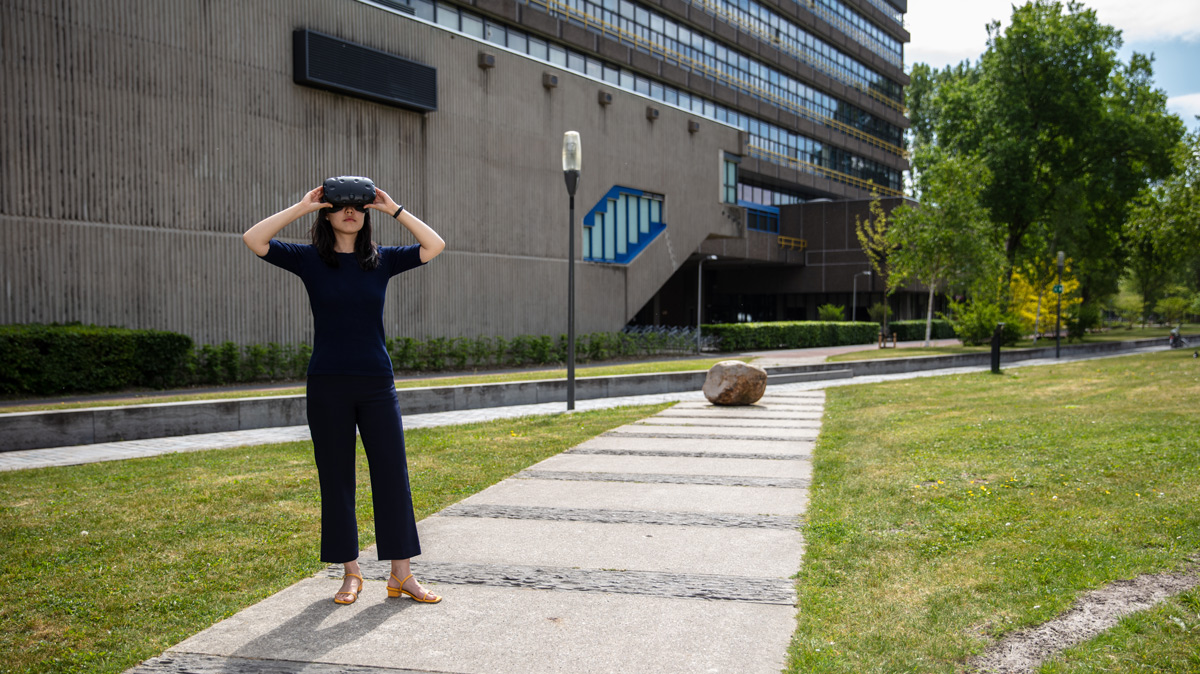 The participants spent about twenty minutes in the virtual building. In that time they visited different floors in order tolocate certain rooms. Feng: ‘I added certain elements, like a rubbish bin in a corridor, to see how it influenced the route people chose.’ After having concluded three tasks, the participants were told to evacuate the building. ‘There was an evacuation which made it necessary for them to find their way out as quickly as possible. I didn’t tell them about the evacuation in advance, so they couldn’t prepare for it.’ 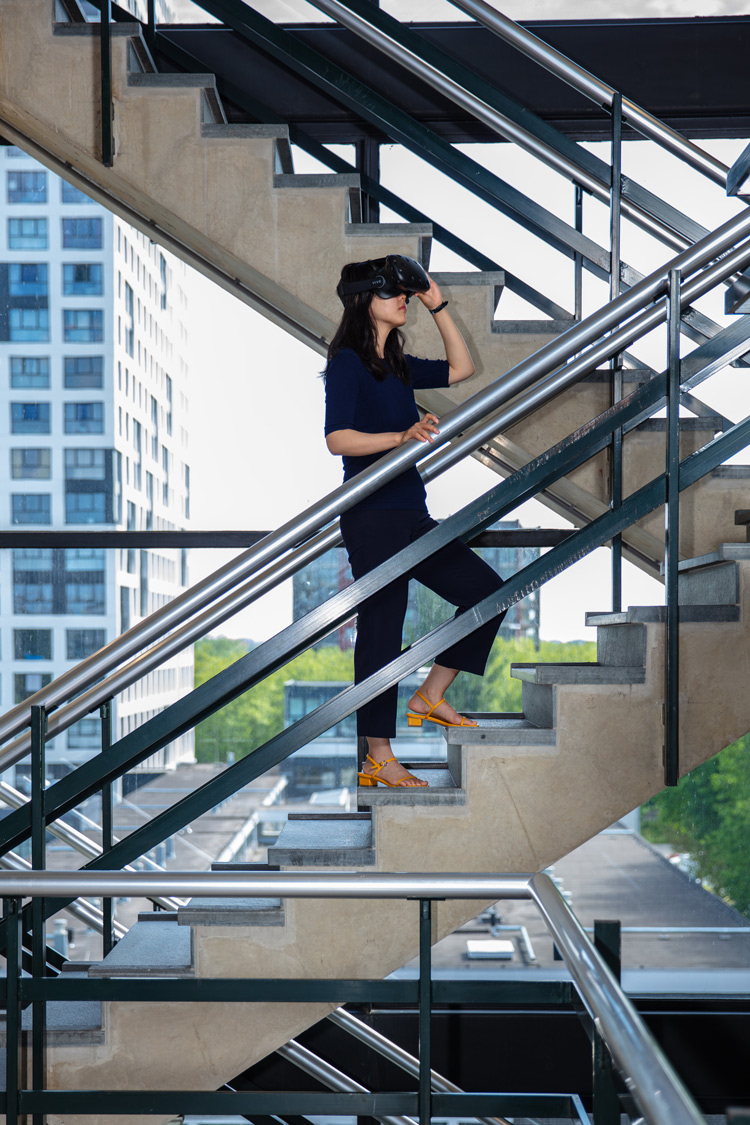 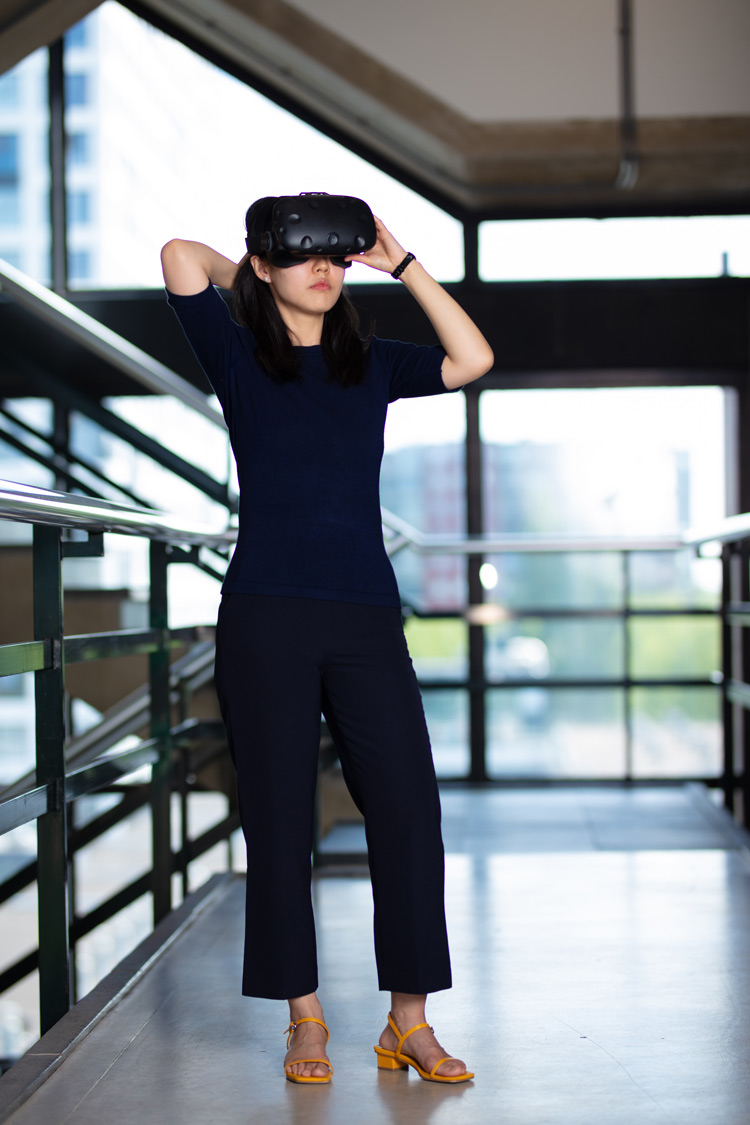 Feng noticed that the people who navigated the building from behind a computer screen were much less likely to become stressed when confronted with danger. ‘ They were not wearing glasses so they were more aware that they were sitting in the real-life environment. To participate in the experiment via a desktop screen is much more like playing a computer game. With VR glasses you really feel you’re in the middle of a situation.’

Feng observed the actions the participants performed as they carried out their tasks. ‘All data is automatically stored. I sometimes made a note of how participants reacted or how they behaved differently being behind a screen and those wearing VR glasses. People wearing VR glasses, for instance, tended to move and explore more with their body as the experiment progressed. I also asked them how they were feeling at the end of the experiment. Only two people, who had never worn VR glasses before, felt a bit nauseous.’

Creating the digital version of the various floors was a huge job, Feng says. ‘I didn’t have any gaming programming experience and I didn’t know anything about architecture. Luckily, the TU Delft has the VR Zone, which had a lot of expertise on using VR and AR for various topics. Colleagues from the VR Zone helped me a lot with the development of the 3D models and wrote the data collections scripts. Next to this, I also watched a lot of instruction videos on YouTube by myself. Although I had walked around in the faculty building many times, I still had to go back all the time to check on things like the colour of the doors, the width of the corridor, and wall details. In the end it took me five months to develop a realistic VR environment.’

Now that the VR part of Feng’s research has been conducted she can move on to the next phase. Some forty participants will be walking in the actual CIG building. ‘If it turns out that the data and experiences of the virtual and real life experiments coincide significantly, VR could play an important part in future investigations of pedestrian behaviour. The big advantage of VR experiments is that they are cheaper than real life ones, and that it is easy to create different situations and add new elements to them.’

* Important to note is that Feng setup a protocol in collaboration with the Human Reseach Ethics Committee to ensure the mental and physical well-being of all participants. 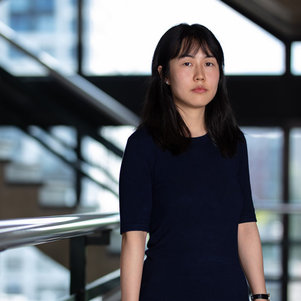