In a channel at TU Delft’s Water lab a stream of purple-tinted water makes its way past thousands of small wooden pegs. The water was dyed by PhD-candidate Son Truong Hong, who is closely observing the flow with an empty bottle of paint in his hands. This test forms part of his research into the importance of the mangrove forests in the Mekong Delta estuaries. Son is fascinated by the tangled roots of these extraordinary trees. What is the mangrove’s role in preventing river bank erosion? And, most crucially, how much of the mangrove forests needs to remain to support a healthy ecosystem?

No place to go

Tropical mangrove forests grow in coastal habitats where water meets land. Son, who is from Vietnam, is looking specifically at the mangroves in the Mekong Delta estuaries in his homeland. This is where fresh and salt water mingle and the tides of the sea can be observed. But the mangrove forests, which grow partly in the water and on land, are in trouble, say Son and his colleagues. Rising sea levels mean the roots of the mangroves are immersed in water too long or too deeply at high tide. The water pushes the mangroves into a narrower and narrower fringe to finally disappear totally. “This phenomenon we call the ‘mangrove squeeze’ and it is the starting point for my research. I use a broader sense of squeeze, however, than in the context of sea-level rise impact alone.”

Son explains that more factors are threatening the forest. The local population is felling trees to make room for fish farms which have been proliferating in recent years.  ‘The mangrove forests in the Mekong estuaries have no place to go, ‘Son explains. ’They are caught between too much brackish water on one side, and agriculture, deforestation and spatial blocking on the other. This is my interpretation of “squeeze”. What I want to establish is the critical size the forests needs to be in order to stay healthy.”

According to Son there are important reasons for maintaining the presence of the mangrove forests in the Mekong estuaries. Mangrove forests play a part in protecting the river banks from erosion. On the basis of aerial photographs of the Mekong Delta Son could see that in sites where mangroves had been felled river banks were eroding at a much faster rate. “There is a connection between mangroves and erosion but what exactly is it?”, Son asked himself. He found that the massive, partly submerged, roots of the trees are efficiently damping the flow of the river and so lessen its eroding impact on the river bank during high tides.

Roots not only help prevent erosion of river banks, they also help to strengthen them by catching the fine particles of sediment (which can include nutrients) carried by the river which are then deposited. “This is very useful for combatting the effects of rising sea levels,” Son states. But the question is how wide the strip of forest should be to optimise this effect. And which mechanisms take place at the interface of the forest and the adjacent river channel? 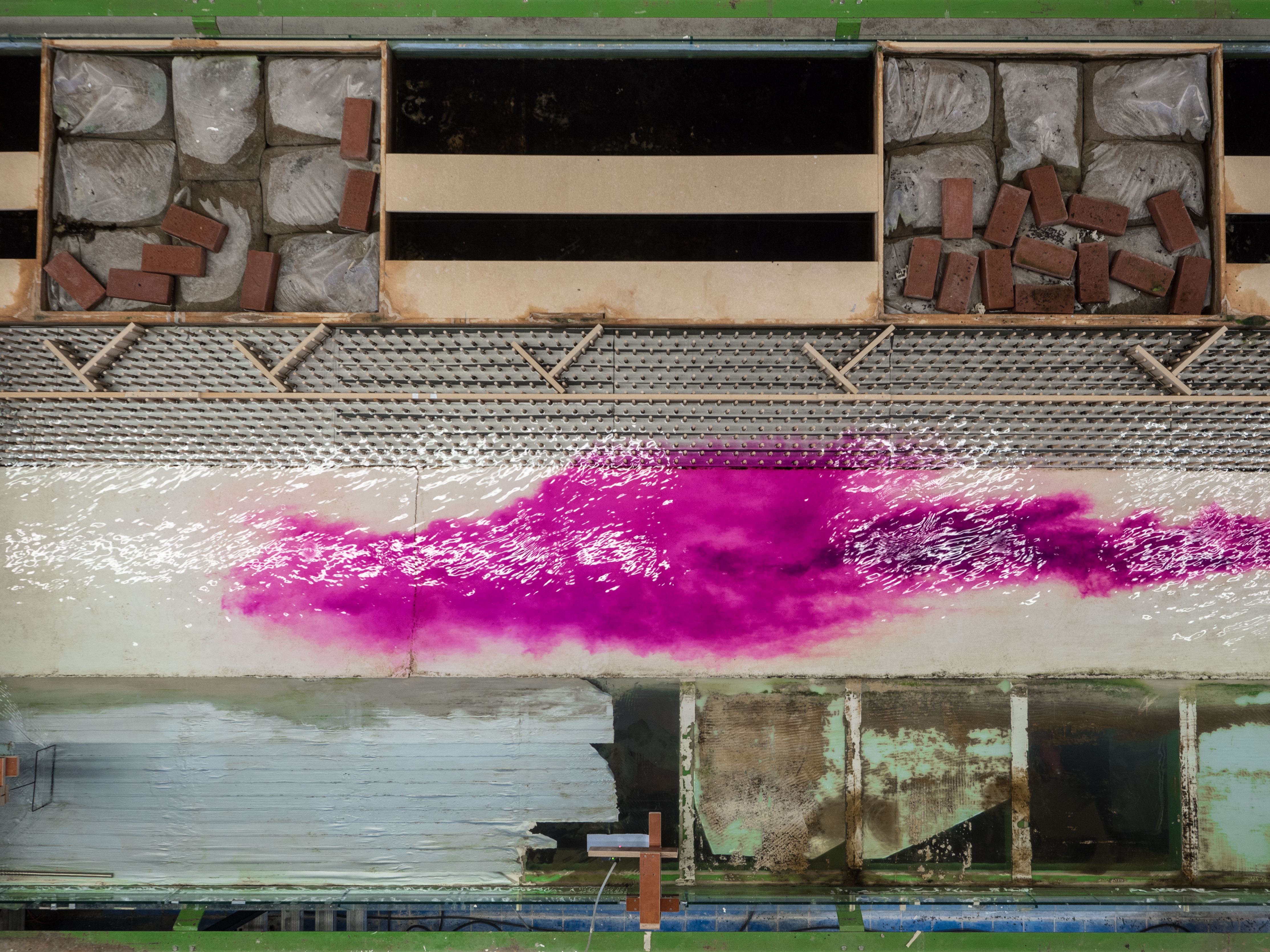 There is more. Apart from preventing erosion mangrove forests also sustain flora and fauna. The swamps formed by mangroves are an important habitat for many species of fish, shrimp and bird. The trees offer protection but, even more importantly, they provide food as nutrient-rich sediment adheres itself to their roots. ‘If the encroachment on the forests continues, the ecosystem will not be able to sustain itself,’ Son warns. ‘We want to be able to tell people how much of the forest needs to remain in order for it to continue to exist. That is why in my experiment I want to find out how the river and the mangrove forest exchange sediment and nutrients.

On the basis of existing data, satellite photos and a Delft3D model Son formulated the hypothesis that in order to maintain a healthy ecosystem and strong river banks a strip of mangrove forest needs to have a width of at least 80 meters. He is now testing his hypothesis in the Water lab flume. In a series of tests Son positions a number of wooden pegs representing the mangrove roots at varying distances from each other. Water runs though the channel along the roots. With the help of cameras, sensors and a type of scoop net he measures the rate at which the water slows down at each level of density. That also tells him if erosion is prevented or lessened.

But the purple dye test is his favourite. “The purple stuff helps to see the penetration of silt and nutrient carrying water in the network of roots in the swamp.” The test reveals a very large eddy structure (or whirlpool) that forms and spirals in a certain way along the wooden pegs. “This specific way in which the wooden pegs impact how the water flows, contributes in a large part to the exchange processes between the mangrove roots and the river current. I think I will call this type of movement a ‘cycling motion’ in my future papers. And yes, it looks really pretty!”

And with that Son grabs a fresh bottle of dye and puts his wellies on for another round of testing. 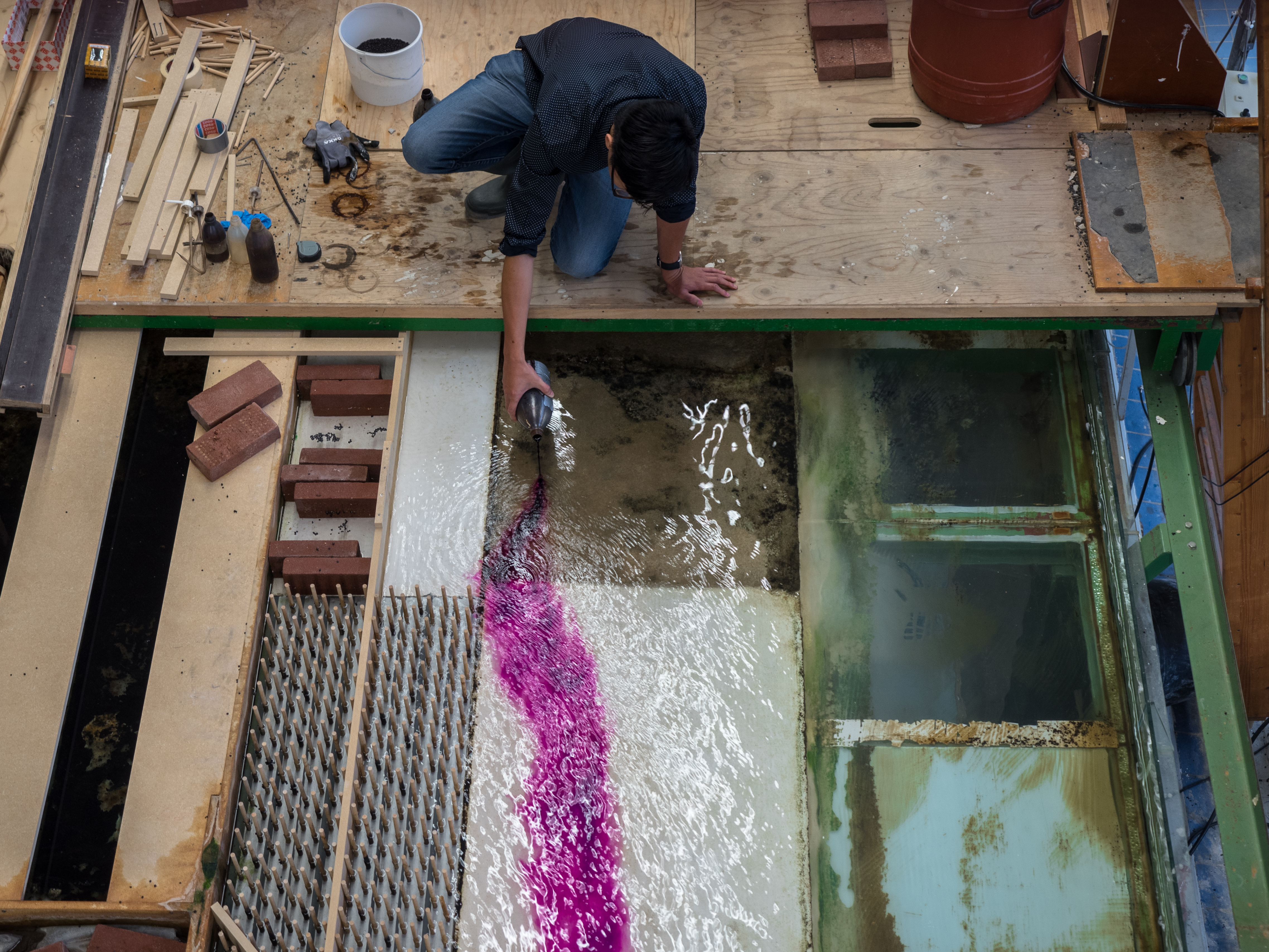 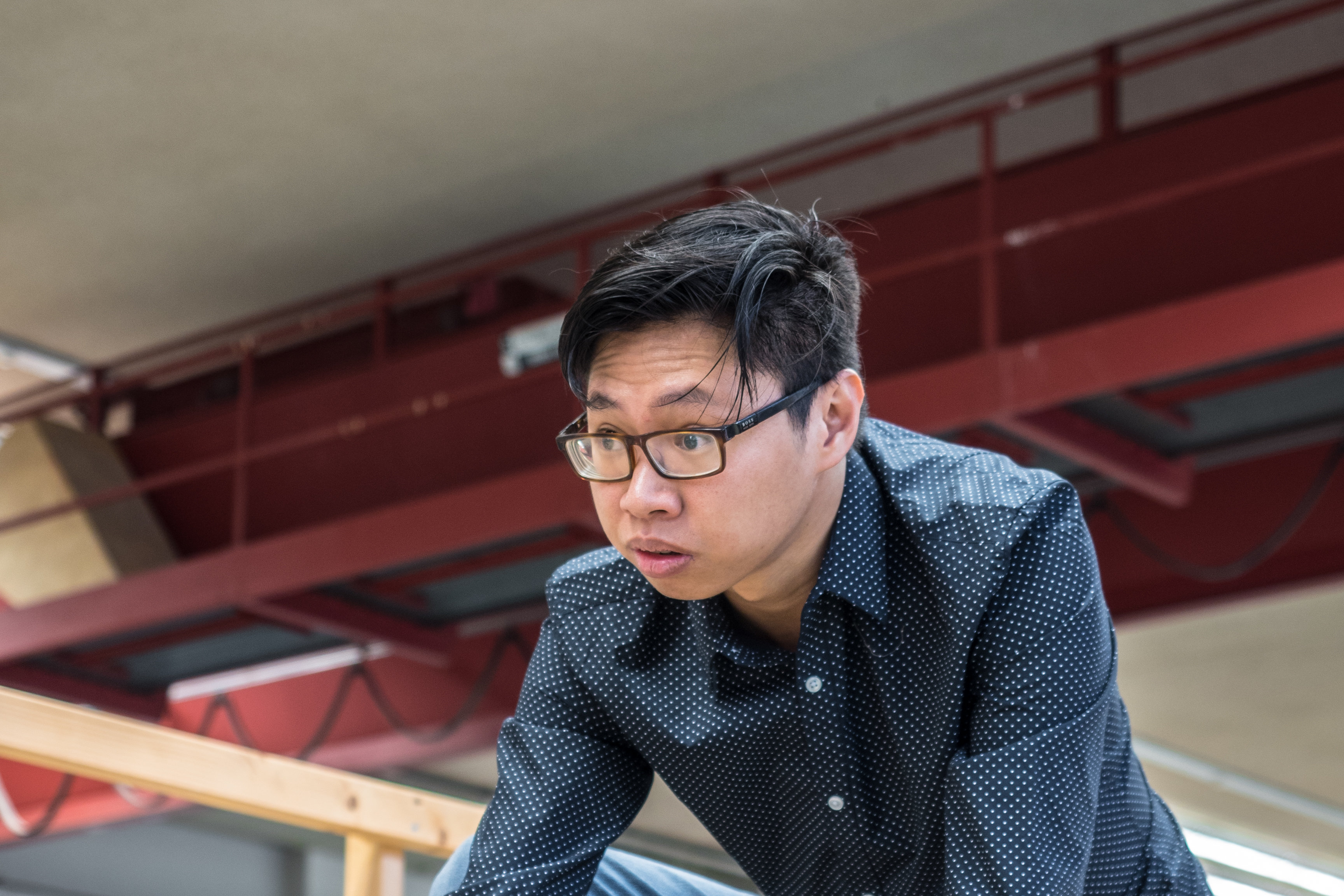