An active volcano? In the Netherlands? Volcanologist Elske de Zeeuw-van Dalfsen has been asked this question on more than one occasion. ‘Actually we have not one, but two active volcanoes,’ she says. However, they are not situated in the flat and obviously volcano-less little country by the North Sea but in the Caribbean.

In 2010 the BES islands (Bonaire, Saint Eustatius and Saba) were given status of special municipality within the Netherlands. The two volcanoes, the Quill on Saint Eustatius, and the Mount Scenery on Saba, prompted Dutch weather bureau KNMI to offer De Zeeuw the position of volcanologist. ‘Nowadays the crater of the Quill is covered in tropical rainforest but it remains an active volcano even so. That means there is a risk for the local population. So we had better be prepared.’

Both Dutch volcanoes are active. ‘That means they have erupted at least once in the last 10,000 years,’ De Zeeuw says. ‘Chances of an eruption in the near future are small, but if it does happen the consequences could be disastrous.’ Her job as a volcanologist entails keeping the island authorities informed of any changes regarding the volcanoes, so action can be taken if needed. ‘It’s very difficult to predict precisely when a volcano is going to erupt but by taking lots of different measurements you increase the possibility of detecting volcanic unrest in time.’

At the moment only seismicity is measured. ‘With seismicity you are not only able to measure the size of the earthquake, it can also indicate when activity increases.’ De Zeeuw is going to expand the seismic network with three other observation methods: temperature measurements of hot springs in the vicinity of the volcanoes, Global Navigation Satellite System (GNSS) observations and measurements using the InSAR technique.

‘A rise in temperature of the hot springs can point to an increase in volcanic activity. GNSS observations, which are based on the same technology as a car navigation system, can determine the position of a certain point with cm-mm accuracy. The instrument is installed at a fixed place close to the volcano and monitors any surface deformation or bulging of the volcano,’ De Zeeuw explains. ‘And the InSAR technique uses radar images of the Earth’s surface, made with satellites that are circling the planet at an altitude of hundreds of kilometres. By comparing these images you can monitor surface deformation with pinpoint accuracy.’

How does a person become a volcanologist at the KNMI? ‘I know exactly how my fascination for volcanoes began,’ De Zeeuw says. ‘I was studying geology in Amsterdam and did an internship at the  Hawaiian Volcano Observatory. That was the first time I saw a glowing, red-hot lava flow up close. I heard the crackling of the fire, caught the typical sulphur smell and felt the scorching heat. That was it, I was hooked. From that moment on I wanted to know more about the subject!’ After graduating De Zeeuw travelled from one volcano to another. ‘I went to the Philippines, Iceland, Indonesia and back to Hawaii. Then I gained a PhD in volcanology.’ When she heard the KNMI was looking for a volcanologist, she decided to go for the job and returned to the Netherlands.

Setting up and interpreting measurements requires knowledge and skill. De Zeeuw: ‘I’m the only volcanologist at the KNMI. That’s why I’m very happy with my secondment at the Geoscience and Remote Sensing department for one day a week.’ De Zeeuw’s activities include observing volcanoes using the before-mentioned InSAR technique. ‘But there is a lot of specialist knowledge of the other methods I use at TU Delft, so I have plenty of people to spar with.’ 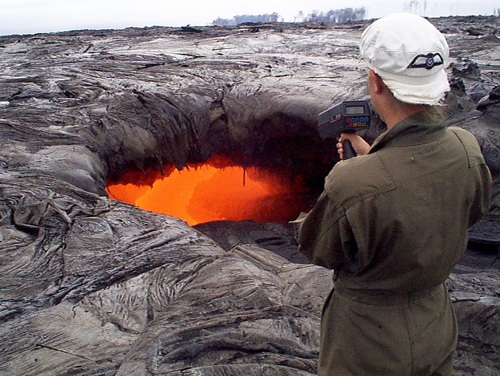 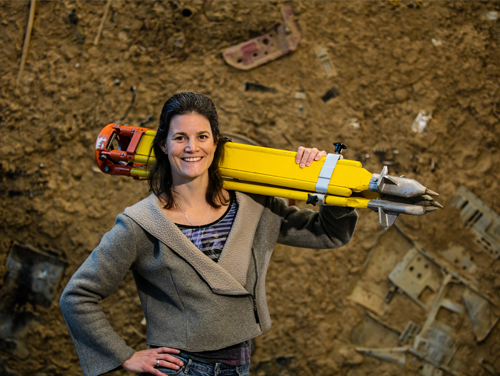 Rivers from a distant past