How much water is intercepted by the canopy of a tree? That was the question PhD candidate Tim van Emmerik had to find an answer to in order to gain a better understanding of the earth’s water cycle. But how to go about it? Fitting every leaf with expensive equipment was not an option, so Tim and colleagues had to develop smart measuring methods to infer the right data. And learn to climb trees, in the Brazilian Amazon.

The importance of trees and rainforests

Tim’s PhD work involves studying precipitation, evaporation and finding ways of measuring plant water uptake. Water shortage, or water stress, is causing problems for agriculture because it makes plants less productive and ultimately leads to plants dying off altogether. But Tim is primarily focused on tropical rainforests. ‘Rainforests play an essential role in the water, oxygen and carbon cycles of the earth and are vital for sustaining our climate,’ he explains. So how does it work?

Rainforests are actually enormous water reservoirs. The trees absorb water from the soil and accumulate water on their canopies, a process called interception. Much of this water evaporates and ends up as precipitation elsewhere on the planet via clouds and wind. That means trees influence weather, precipitation, and drought in particular. They also absorb harmful CO2 from the atmosphere and turn it into oxygen. ‘If the Amazonian rainforest gets dryer, or smaller because of deforestation, the water and carbon cycles will be affected and that will contribute to climate change,’ Tim explains.

Tim and his colleagues hope to get a better idea of the impact of climate change and to be able to predict, for instance, the effect of deforestation on local rainfall. But in order to understand the cycles Tim has to find out how the rainforest, or specifically one tree, exchanges heat, water and CO2 with the atmosphere.

The search for ways of measuring these processes started six years ago, at the TU Delft’s Water Management department. John Selker, professor at Orgeon State University and a friend of Tim’s supervisor, found that the way to approximate the amount of moisture present in the canopy, the branches and the trunk of the tree was to measure the vibrations of the tree, or its natural sway frequency. The heavier the load born by the canopy, the branches and the trunk, the greater the differences in natural frequency, the theory was.

Tim picked up from there but after a year and a half he found he was barking up the wrong tree. ‘I put too great a store on the maths. It was only when I started again from scratch that I realised I was on the wrong track. Of course there are many more factors that affect tree sway, think of the height and weight of a tree, the number of leaves, the structure, the amount of precipitation and, of course, the wind.’

The main problem was that these variables were not easy to measure precisely. Measurement instruments were too expensive or damaged the trees. Most were not robust enough to withstand the extreme conditions of the rainforest. ‘The minute you hang boxes full of equipment from a tree they become home to snakes, spiders and other animals,’ Tim explains. ‘Satellite and radar equipment are a good alternative but you can’t tell if the measurements are correct until you’ve measured exactly what’s happening on the ground,’

The rise of the smartphone industry meant that sensors have become cheaper and more robust. A lucky break for Tim, and he and his colleague Rolf Hut decided to use accelerometers as a cheap alternative for measuring tree sway over longer periods of time. By linking the increases in the frequency of the movements to other meteorological and hydrological data, he was able to establish a relationship between tree sway and external pressures (such as wind, evaporation and interception) and to separate them from the physical properties of the tree itself (elasticity, mass and water content).

Up a tree for science

The only thing left for them to do was to mount the accelerometers on the designated trees. That was easier said than done because some of the 19 trees Tim has chosen were about 40 metres tall. And they were in the Brazilian Amazon. To make matters worse, two of the experienced tree climbers they had hoped would do the job turned out to be ill and injured when the fieldwork was due to start.

Tim decided to take a quick tree climbing course himself. Fortunately, he spoke sufficient Portuguese to understand the instructions. ‘I had to loop a long line over the right branch and then haul up my safety line and start climbing. It was tiring and a little scary because it was a long way up. But the views were fantastic, as long as there were no spiders to spoil the fun. And at least I knew the sensors were in the right place.’

The paper Tim and his colleagues subsequently wrote was recently accepted by the science journal Sensors. He who dares, wins. 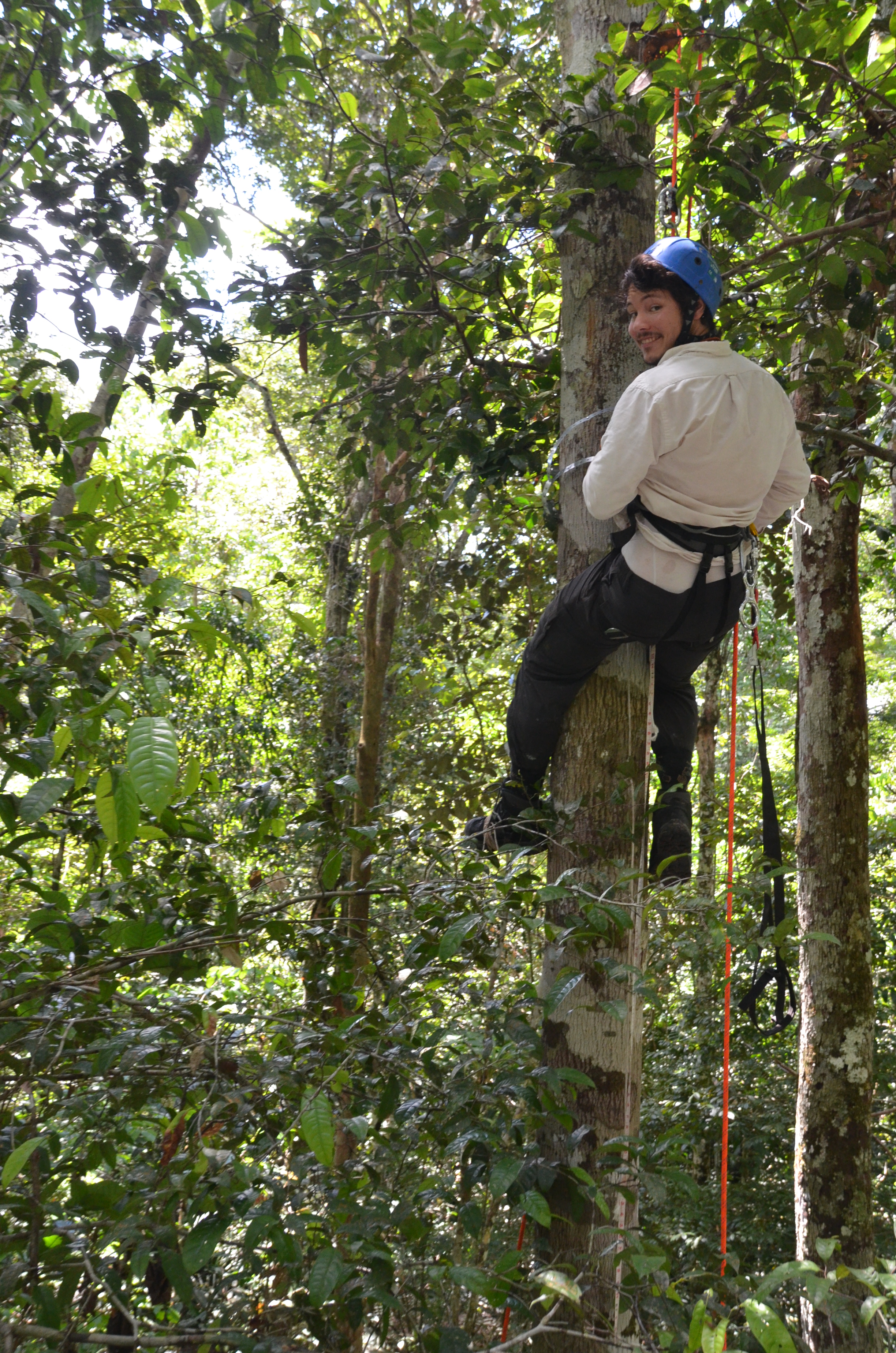 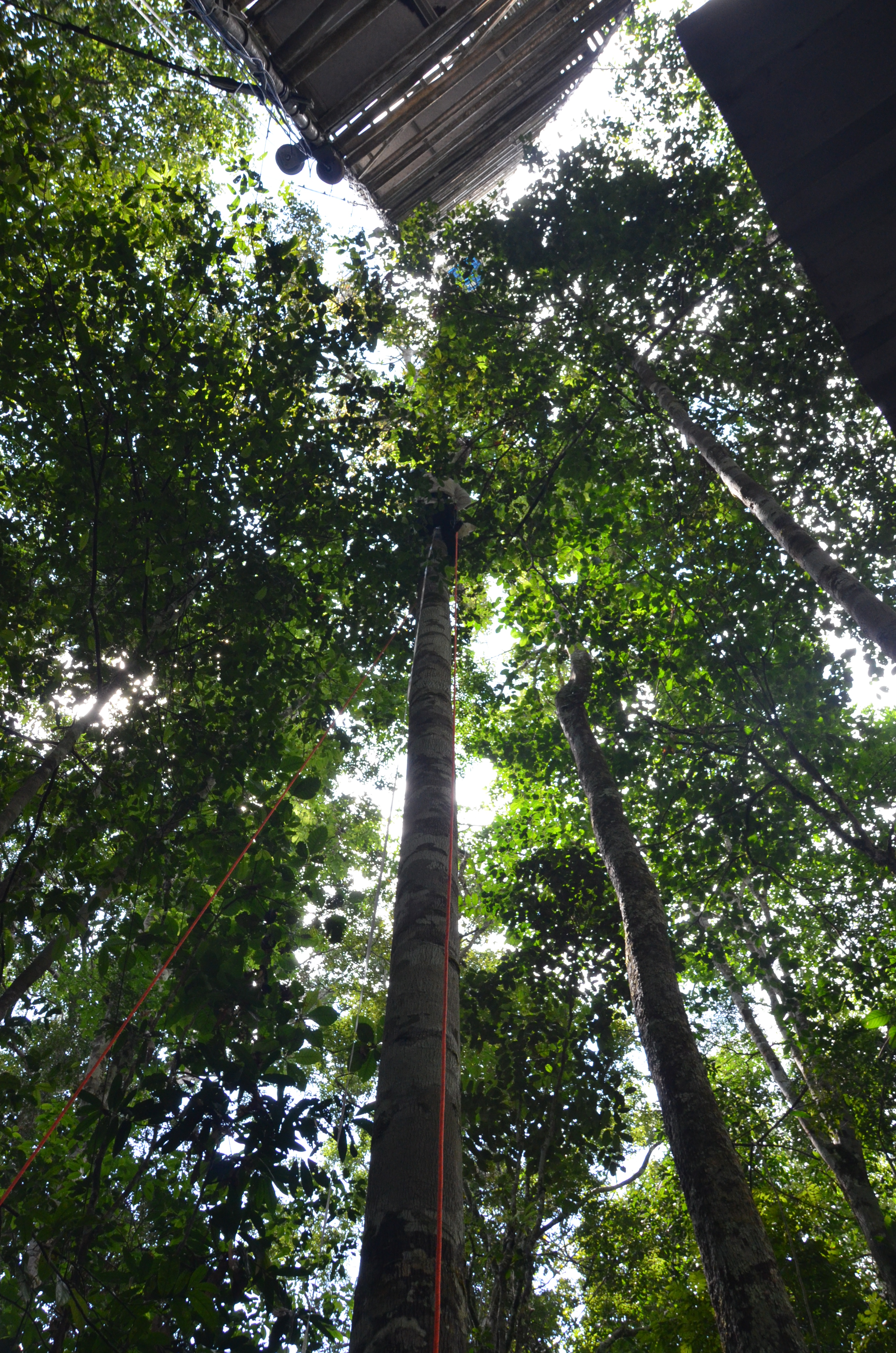 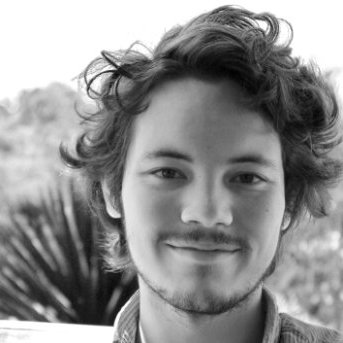