Next year, a helium balloon the size of a soccer stadium will bring a NASA telescope to the edge of space. This project is called GUSTO, and it will help scientists understand galactic evolution by probing interstellar gas. Its most important payload are three detectors developed by Jian Rong Gao and his teams at TU Delft and SRON, without which the telescope would be blind as to its mission purpose.

‘Terahertz radiation is a great source of information for astronomers,’ says Jian Rong Gao, theme leader on Space Sensing at the TU Delft Space Institute and head of the Cryogenic Instrument Section at SRON-Utrecht. ‘Because of its long wavelength it can travel great distances through the universe, without being scattered by interstellar dust. The difficulty is that it is easily absorbed by water vapour. As earth’s atmosphere is full of water vapour, you can’t do measurements from the ground. You need to be at high altitudes.’ The upcoming GUSTO mission by NASA will take three terahertz detectors to the edge of space. Each of these detectors is tuned to a single specific emission line of the elements oxygen, carbon and nitrogen. The presence of these elements in interstellar gas provides insight into the formation and destruction of star-forming clouds, telling the story of galactic evolution. ‘We, in the Netherlands, were the only ones who could provide the detectors for this balloon mission,’ Gao says. ‘They are the culmination of twenty years of research at TU Delft and SRON.’
* GUSTO is the acronym for Galactic/Extragalactic ULDB Spectroscopic Terahertz Observatory. ULDB, in turn, stands for Ultra-Long Duration Balloon.

The terahertz range – the far-infrared – falls between microwaves and visible light. Technology to detect and process the latter two frequencies is much more mature as they have plenty of applications in daily life. Think of (automotive) radar and television signals and, for visible light, your cell phone camera. The lack of applications for terahertz radiation has resulted in what is called the terahertz technology gap. ‘It has been a continuing struggle to find funding for our research on terahertz detection, to demonstrate new technology,’ Gao says. The real goal of everybody who is working on space technology, is to use their acquired knowledge to develop an instrument for an actual mission. There are very few of such opportunities and even when they come, it doesn’t mean an end to uncertainty. Gao: ‘These projects can run out of money or simply get cancelled, or your detector fails for some reason. Many people in space technology work for twenty or even thirty years, in the end only having publications to show for it.’

One terahertz (1 THz) equals a thousand billion oscillations per second. Radiation in the far-infrared region of the electromagnetic spectrum has frequencies of 0.3 to 20 terahertz. GUSTO will measure the specific emission lines of ionised nitrogen (at 1.4 THz), neutral carbon (at 1.9 THz) and neutral oxygen (at 4.7 THz).

Each of the three GUSTO detectors is based on an indirect detection technique that has been used in astronomy since the 1950s. By mixing the incoming light with a reference light source, the signal is down converted from the terahertz range to the microwave range, where technology is advanced enough for further signal processing. ‘We were the first to build a detector for the oxygen emission line that went all the way to the edge of space,’ Gao says. That was during a 2016 balloon mission, named STO2, that served as a pathfinder mission for GUSTO. ‘The reference light source for the oxygen line was the last to be added to that mission. After lift-off, initial tests showed everything to be working fine. But the STO2 consortium didn’t want to take any risks with the two main detectors for the nitrogen and carbon emission lines. They switched off the oxygen reference source until the last days of the mission. By then, an internet connector, not provided by us, had failed due to long exposure to the sun, making real observations of the oxygen line impossible.’

Nevertheless, the STO2 mission was considered a success, leading NASA to support the GUSTO mission. After passing last year’s Critical Design Review, the mission has received it’s definitive ‘go’ and not even COVID-19 will be able to derail it. The mission will map a large part of the Milky Way and the Large Magellanic Cloud, a neighbouring galaxy. To speed up this mapping process, the GUSTO detectors will consist of eight pixels each, rather than the single pixels used in STO2. ‘In the lab we can build whatever detector we want, but for GUSTO we had to adhere to strict mission requirements,’ Gao says. ‘The balloon’s solar panels put a limit on power usage. We also had to balance reliability and performance while under a tight time schedule and budget.’ 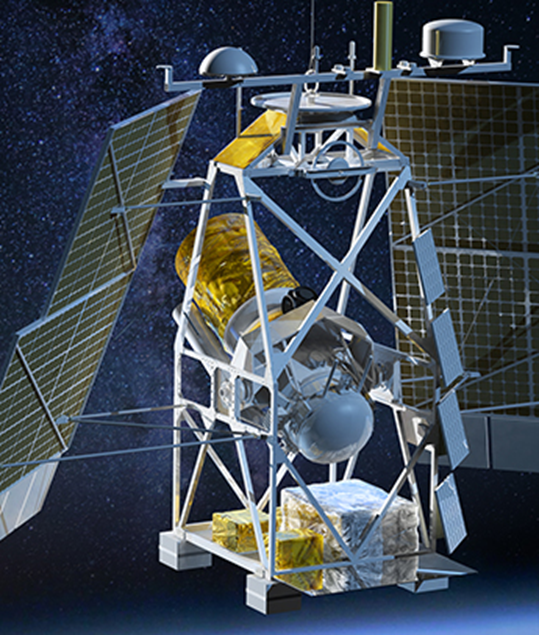 It was the oxygen detector that really stretched the limits of terahertz technology. In order to build its reference light source, TU Delft and SRON teamed up with the group of professor Qing Hu from the Massachusetts Institute of Technology. Gao: ‘I met him at a conference about fifteen years ago where he presented a poster on something very new and very promising, called a quantum cascade laser. We decided to collaborate, combining his lasers with our detector technology. When we presented our first results at a conference two years later, we met professor Christopher Walker, a space observation visionary when it comes to telescopes and instruments. We immediately started to sketch an instrument which, much later on, resulted in detectors for the STO2 and GUSTO missions, both initiated and led by Walker.’

Quantum cascade lasers are the only lasers capable of providing a very pure reference signal of the required output power in the required terahertz frequencies. They are also compact and have very low power requirements themselves. The lasers consist of ultrathin alternating layers of semiconductor materials that are grown atomic layer by atomic layer. Due to quantum mechanics, an electron inside this material will experience a staircase-like series of energy steps. Each time it takes a step it may emit a photon. The energy of these photons depends only on the distance between the material layers and can therefore be finetuned with great precision. Gao: ‘The MIT group spent a lot of effort in fine-tuning the laser structure, such that it would fit the specific needs of our detector. It was a very fruitful collaboration. Not only did we develop a new technology for space, it also resulted in many joint publications.'

On the left, the two detector arrays for measuring the nitrogen and carbon emission lines. Each lens is about a centimetre in diameter. On the right, the backside of one of these detectors, where each detector chip is glued to the backside of each lens.

The final difficulty in building the oxygen detector was to split the laser beam into eight identical beams such that they could serve as a reference signal for all eight pixels. To achieve this goal, the researchers from TU Delft and SRON developed a so-called phase grating. ‘Basically, it is a reflective surface with tiny custom-designed grooves that have a very specific shape, size and distance to each other,’ Gao says. ‘Somewhat magically it will split an incoming beam into multiple beams.’ This type of technology has been known for ten years but, again, it hadn’t yet been fully evolved for terahertz applications. Gao: ‘We wanted to collaborate with a German group, who had made a grating for low frequencies, but they were already working on a competing instrument for a Boeing 747 airplane.’ Then, at a New Year’s breakfast in the TU Delft Aula, Gao met professor Paul Urbach, who mentioned he had a Ph.D student working on something similar. ‘Space development typically takes a very long time and we often quip about hoping to still be alive by the time our technology is launched,’ Gao says. ‘But it was only six years ago that Urbach’s Ph.D student, and a master student supervised by me, started development of the phase grating. And now it will be part of the GUSTO mission.’

Even though all the tests in the lab have shown that the phase grating works as modelled, Gao is still holding his breath. ‘I am sure it will work,’ he says, ‘but we have to wait and see whether we will achieve exactly what we wanted.’ If all goes well, GUSTO will lift off from Antarctica in December 2021, reaching an altitude of 36 kilometres and slowly spiralling outwards due to a weather phenomenon known as the Antarctic anticyclone. ‘GUSTO will not be salvaged. After a hundred days of flight it will drop into the ocean,’ Gao says. ‘Those present at lift-off will be the last ones to see it. I have already been to Antarctica for the STO2 launch. Perhaps this time one of the talented young researchers from TU Delft or SRON may be able to see our detectors off.’ 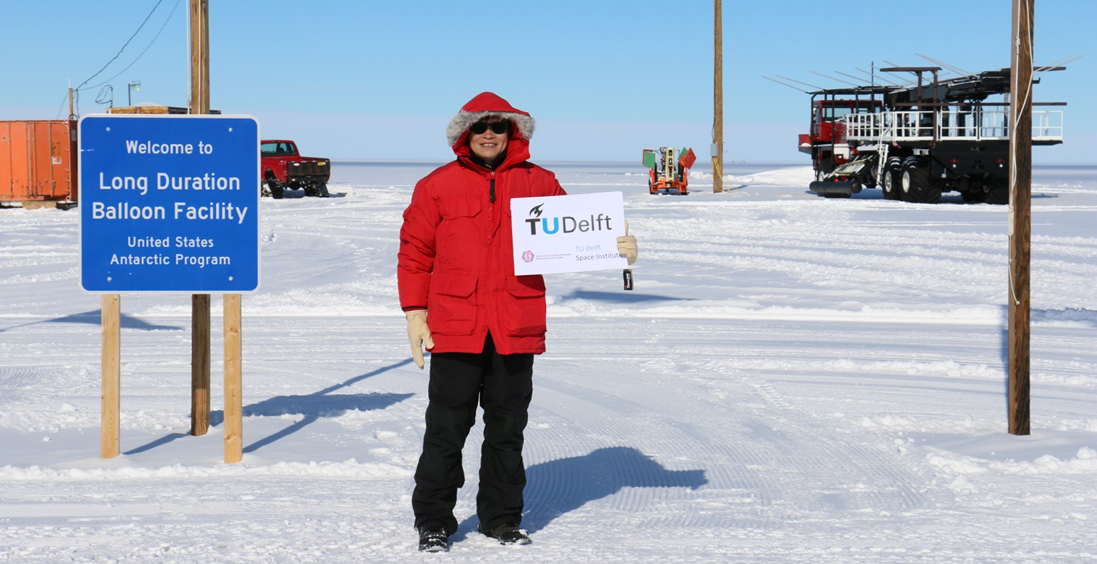 The artistic impression of GUSTO used as title image is property of NASA/Johns Hopkins APL. 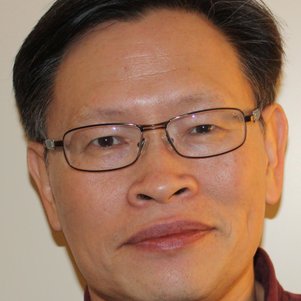