Imagine using a chip to analyse heart cells, or being notified by a smart plaster if your heart rate gets too high. These are two examples of research that Frans Widdershoven is working on. This fresh new professor is developing new smart sensors.

In a greenhouse, cucumbers are growing beautifully. A grower is cultivating them under the most favourable conditions, closely monitoring the precise amount of water they need and whether the temperature is optimal, to ensure that the cucumbers that end up on your plate are juicy, flavoursome and green. The grower’s job is by no means carefree, however. What if the crop is blighted by some disease?

One of the strategies that researchers are working on to prevent this involves an “electronic nose”. All plants, cucumbers included, emit a scent. An electronic nose can immediately detect whether something is wrong. The same technique can be applied in a chicken coop or cowshed. As soon as a disease breaks out, the electronic nose will detect it and give a warning.

Smart sensors can be used to improve the lives of many people.

These are just a few examples of the possibilities afforded by smart technology, not least thanks to research conducted by TU Delft. It is important that the chips are smart, can be manufactured inexpensively, and consume little power. That is what Frans Widdershoven is working to achieve. At TU Delft, he is active as Professor of Low Power Embedded Smart Sensors in the Bio-Electronics department of the Faculty of EEMCS (Electrical Engineering, Mathematics and Computer Science). In addition, he is associated as a Fellow with chip manufacturer NXP.

At TU Delft, several researchers in various faculties, including Frans Widdershoven, Peter Steeneken and Murali Ghatkesar, are working on chip with a built-in sensor that is so sensitive that it registers a single coronavirus particle. Serge Lemay from the University of Twente is also involved. ‘We want to make the electrodes in such a way that they cause corona particles to attach themselves to them, so that we can count how many there are,’ Steeneken explains. He is a Professor of Dynamics of Micro and Nanosystems at the Faculty of 3mE. Here too, CMOS technology is used. ‘The smartness is already built in. We hope this will lead to a fast test,’ Steeneken continues. ‘You could even incorporate them into face masks, so that you know whether you have Covid-19 or have been somewhere where it was in the air.’ The aim is to make such a test available for a couple of euros. We’re not there yet, though. The research is still at an early stage.

The professor is always keen to talk about the plethora of interesting possibilities. Smart plasters are one example. You stick them on your skin and they start measuring all kinds of things, such as your temperature, heart rate, breathing and oxygen saturation. This is crucial data that doctors use to monitor how their patients are doing. ‘Electrical sensors can measure movements inside your body,’ Widdershoven explains.

And this kind of plaster can do even more. It can even interpret the collected data itself and check whether your general health is good. ‘Intelligence has to be built in, so it makes sense to use a chip. The chip analyses the data, gives a warning if something seems about to go wrong, and forwards the data wirelessly. Obviously, there is built-in security, because you want such personal information to be protected. Moreover, the energy consumption needs to be low. We will soon be able to make these kinds of plasters.’

Everyone uses it, but hardly ever consciously.

This example gives a glimpse of possibilities for the short term. Smart sensors can be used in this way to improve the lives of many people. Intelligence is one of the key words, here. We can enable this by using CMOS technology. The term may not be very widely known, but people encounter this technology all the time without being aware of it. ‘Everyone uses it, but hardly ever consciously,’ Widdershoven says. For instance, CMOS technology is part of nearly all the electronic equipment that we use, such as smartphones, laptops, televisions, and cameras.

‘Thanks to developments in CMOS technology over the past fifty years, we can now fit a billion transistors into one square centimetre of silicon. They process all kinds of arithmetic operations to make your smartphone and smart speaker function. And apart from that, they are extremely energy-efficient,’ Widdershoven adds.

Nowadays, CMOS is a superpower behind all smart products that contain electronics, the professor explains. And you can also use the technology for other applications, such as sensors. Sensors are currently almost always separate components that you connect to something. For instance, they measure movement or CO2, and forward signals to a CMOS chip, where they are then analysed and processed. ‘Looking ahead to the future from my field of study, you’d want to start incorporating nearly all sensors directly into the CMOS chip. I think that’s possible. You’re then making the sensors themselves smart, while reducing the total surface area and saving on energy and costs.’

It is important that the chips are smart, can be manufactured inexpensively, and consume little power.

Widdershoven emphasizes that a general approach is needed here. ‘Because you don’t want to make specific adjustments to the CMOS technology for each type of sensor. That would be far too complex and costly, and not reusable, so I’m developing a new, universal method.’ This involves expanding the CMOS chip with a special sensor field consisting of numerous tiny electrodes located just underneath the chip’s surface. ‘You don’t have to adjust the CMOS technology itself for this. The microelectrodes can measure right through the surface of the chip what materials or objects are directly above it.’ This allows you to add a new sensor option to the existing CMOS technology.

Using an inkjet printer, you can print several materials next to each other on top of the sensor field. There are many options, depending on what you need. ‘Imagine you’re developing an alcohol test. You print material that is sensitive to that. However, the material also reacts to other substances in your breath, such as water vapour. I want to filter out this cross sensitivity, as it’s known. You can do that by printing a second material next to the first one which is more sensitive to water vapour than to alcohol. The chip then calculates precisely what you are measuring.’

The type of sensors used for this are “capacitive” – a rather difficult word, perhaps, but the way they are used is not as strange as the word might suggest. This type of sensor functions in a similar way to the touch keys of coffee machines used in many offices. ‘Those touch keys are actually also capacitive sensors. When you put your finger on the key, small sensors immediately recognise this and inform the machine what variety of coffee you want. The touch screen of your phone or tablet also works like this. We want to use this type of approach as well, only in a microscopic version. You could see it a bit like a miniscule touch screen of one square millimetre or even smaller.’ 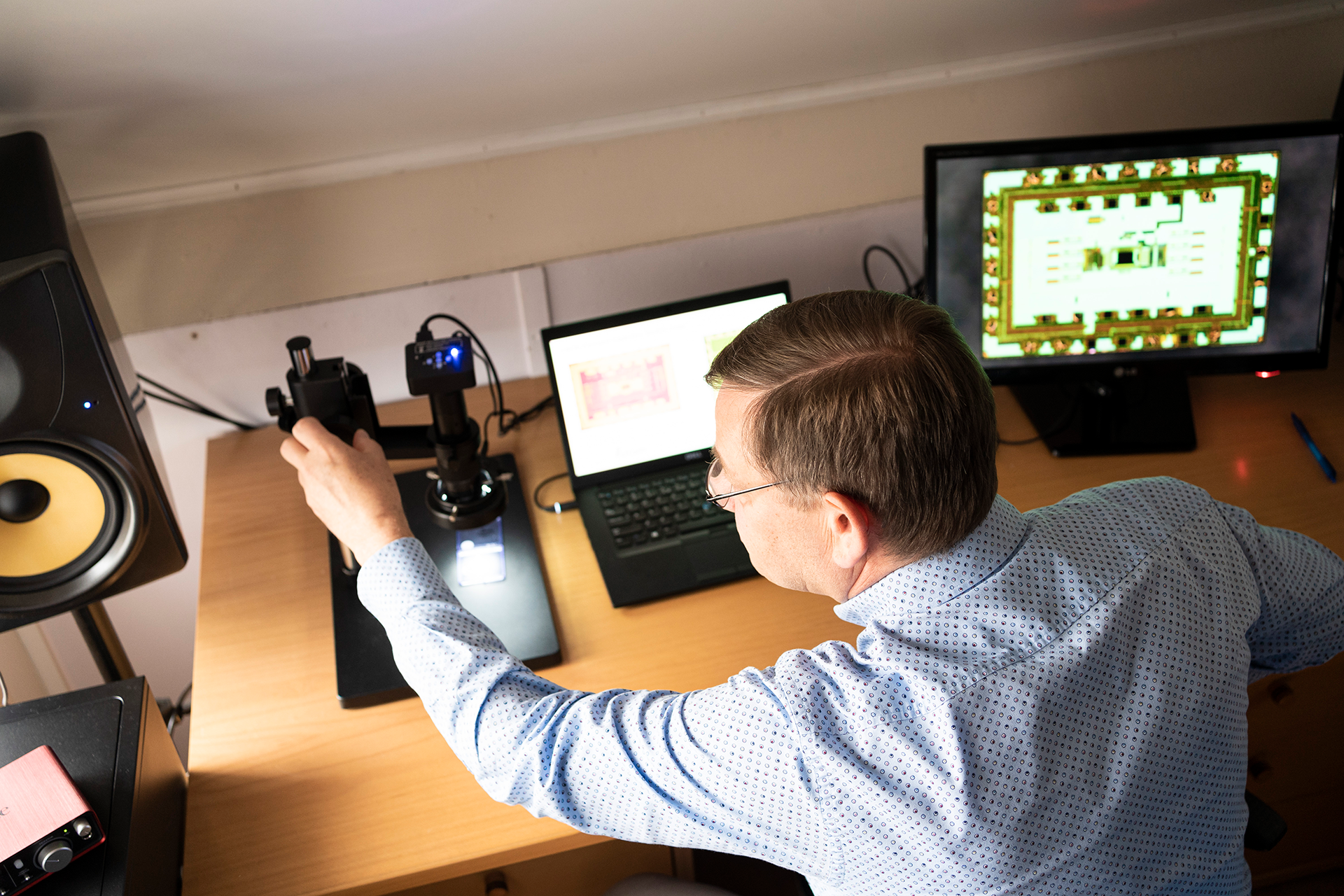 This type of chip contains very many extremely small electrodes. If you add something to it using an inkjet printer, a droplet will be bigger than a single one of these electrodes. So imagine you apply various droplets to a chip, for instance, to measure air humidity and CO2 concentration. How can you tell if a droplet has been applied at the right location? ‘You let the chip itself establish that. It scans the surface and determines exactly what has been added. The built-in calculation program recognises the material type. You are now making smart use of the intelligence contained in the chip.’

Widdershoven believes that this new approach to producing smart chips has the potential to revolutionise the world of sensors. ‘That’s our ultimate aim. It’s radical, though, not least because it will change the value chain of sensor systems. If separate sensors become redundant, established sensor manufacturers will be out of business. That would be quite a change. Even NXP, the company where I work, still needs to adjust itself a bit to the idea.’

Widdershoven is also currently working on a chip for research into living heart cells and tissue at TU Delft, together with Wouter Serdijn and PhD candidate Rui Guan. ‘Suppose someone is undergoing heart surgery and you remove tissue. Then that tissue is valuable, because it comes from a person with a medical condition. Obviously, you want to remedy the condition or at least prevent any deterioration. You can place the tissue, while it is still alive, on a special chip. A heart cell will then cover a number of electrodes on the top of the chip. You apply a voltage pulse to it and measure whether the heart cells in the tissue are properly transmitting signals to each other and contracting. This provides valuable information on how heart tissue functions at a microscopic level.’ TU Delft is working on this project together with Natasja de Groot and Yannick Taverne of the Erasmus MC.

It is no coincidence that Widdershoven is searching for smart solutions using new technology. He has been interested in technology since childhood. As a young boy, he would take radios apart and build new things from the parts. ‘I made my first guitar amplifier myself using radio tubes. I’ve always been fascinated by technology. I always want to understand the theory first, though, before making a prediction and then starting to build something to see if it will work.’

He also used to enjoy watching the first Star Trek series, which he found inspiring. ‘Whenever you wanted to communicate with the mother ship, you just had to tap a little box and then you could talk to each other. It’s a lot like the mobile phone system we have now. It was still a fantasy at the time – something that seemed impossible. And there were several more examples. It not only inspired me to investigate applications that appear within reach, but also to look far into the future.’