A design atlas for country estates in the region, exhibitions with all kinds of design ideas and buildings saved from demolition: just a few of the varied results of KaDEr (project on characteristic sustainable heritage in the Dutch province Gelderland). In this large-scale project, many researchers and especially students explored and developed new perspectives on heritage policies for the province of Gelderland.

The province of Gelderland has an enormous amount of heritage, from country estates and monumental churches to traces of the Second World War. With transitioning to more sustainable heritage, not only the interests of the individual owners and the municipalities and provinces play a role. The overarching social value is key: heritage, too, must contribute to a future that is no longer dependent on non-renewable energy sources.
The KaDEr-project was prompted by the troublesome heritage policy, which did not provide sufficient scope to create added value through sustainability. For example, grants were available to repair a leaking roof, but if that same roof was in good condition, no application could be made to make it more sustainable by adding a new layer of insulation. The application procedures became increasingly complicated and the policies revolved around dots on a map. Separate, individual projects were awarded grants, while overarching themes were not being sufficiently taken into account. In order to tackle major issues such as the preservation of heritage, we should not be looking at dots, but rather areas on the map. The question for TU Delft's Faculty of Architecture and the Built Environment was therefore: what should the focus of heritage policies be? How can the transition to more sustainable heritage be included in the policies and how can existing procedures be improved?

Where such a question would normally be put to a consultancy, the province explicitly chose to make use of TU Delft's academic knowledge. "Academic knowledge is neutral, so we could investigate the possibilities independently of the various stakeholders," says research leader Hielkje Zijlstra. "From the start, the condition was that education should be part of the project. The students' open-minded attitudes have led to many new ideas, with which they in turn changed many people's minds."de dat het onderwijs deel zou zijn van het project. De vrijblijvendheid en de onbevangenheid van de studenten heeft gezorgd voor veel nieuwe ideeën, waarmee ze veel mensen op andere gedachten hebben weten te brengen.”

The first design studios started in 2017, with students from the MSc-programme looking at concrete cases in Gelderland. In doing so, the research team distinguished between different scales, to which separate subprojects were linked in Living Labs. For example, the students looked at the XL-scale of the cities of Zutphen, Winterswijk, and Elburg; the L-scale of the country estates of the Baakse Beek, Voorst, and Gelders Arcadië; the M-scale of churches as a specific building type; and the S-scale of one special building: the Reuversweerd country house in the municipality of Brummen.

In all projects, the students started by asking critical questions to the people on site. What is the main challenge? Where are the opportunities? During each project, the students also went on excursions to various locations in the region. This opened doors to places you would not normally visit. Archives were opened, volunteers searched and joined the though process. In Zutphen, a mobile heritage workshop was set up in a former vicarage, where the students were welcome all year round. Finally, the results were presented on location in the form of symposia and exhibitions. Together with mayors, architects, urban planners, residents and other critics, the students detailed their plans even further.

Students in conversation with mayor Vermeulen in Zutphen, 13 September 2017

The mobile heritage workshop in Zutphen in September 2018

On the XL scale, the students have done the preliminary work for roadshows in Zutphen and Elburg, during which roadmaps will be drawn up for making the historic inner cities more sustainable. In September 2021, together with the owners of various monumental buildings and various organisations, they will examine how these cities can make room for energy transition. The preliminary work has already shown that heritage does not always have to be a 'problem'. The Baudartius College in Zutphen, for example, was nominated for demolition, but the students saw opportunities for transforming the building. The students came up with possible functions such as a heritage centre, a dance academy, a music school and a space for exhibitions, an artists' collective and a people's university. Because of the inspiring plans, the municipality of Zutphen decided not to demolish the building, but to designate it as a municipal monument and to repurpose it as a location with a cultural and social function for the city of Zutphen.

The design of Jacqueline van Dam for the Baudartius College building turns the former inner courtyard into a large, roofed space, where different kinds of activities may be programmed.

On the L-scale, the country estates in the regions of the Baakse Beek, Voorst and Gelders Arcadië were examined. The many country estates in these areas often face the same challenges: desiccation, financial management, and making not only the buildings, but the entire area more sustainable. The students' design projects have resulted in a series of design ideas that outline scenarios for the future of the area. The scenarios are improvement proposals for integrating tourism, water management, financial management, sustainable management of agriculture and the landscape, among others. The lessons learned will be combined with good overview maps in a design atlas for the region. In the autumn of 2021, the atlas will be published together with the association Gelders Genootschap. 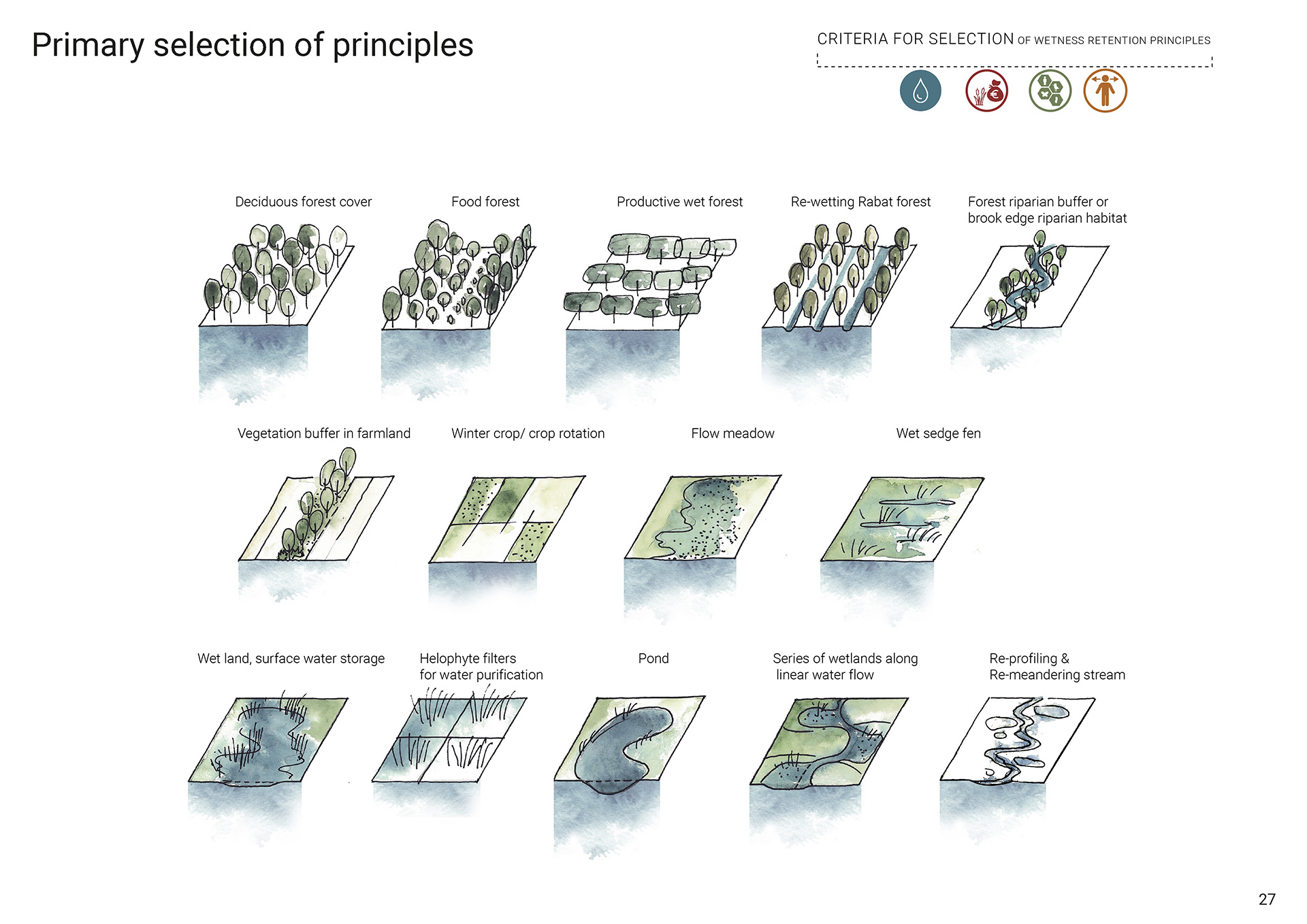 Design principles for water retention in an desiccated landscape, from the design by Alia Shahed for Gelders Arcadië

The M-scale focussed on one type of building, in order to convert the policy aimed at separate projects as dots on the map towards a policy aimed at areas. In Gelderland, many (monumental) churches can be found, some of which are vacant or less frequently used. Both the climatic and financial sustainability of these churches prove to be challenging. The students zoomed in on a number of specific churches to investigate the possibilities. For the St. Jacobus Church in Winterwijk, the students made striking plans for cultural facilities, such as a library, a city broadcaster, a café, a music school, space for vocational training, workshops and courses, and even a brewery. As a result of these ideas, the church council is now planning to use another church in the marketplace for Sunday mass and to convert the St. Jacobus church into a cultural destination, meaning the church will be preserved. 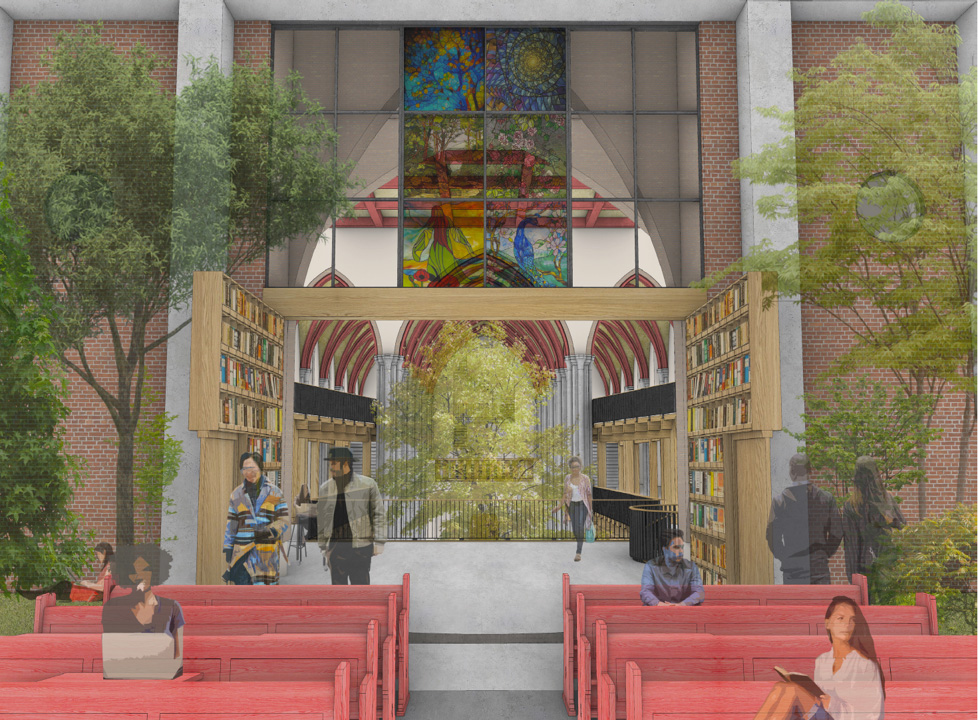 Dinand Kruize created space for, amongst others, a library and flexible workplaces in his design for the St. Jacobskerk in Winterswijk.

Making monumental buildings more sustainable is a speciality. Post-insulation of a building can result in more efficient energy use, but it can also cause damage to the old walls and beams in a building. That is why the Reuversweerd country estate has been set up as a learning site on the S-scale: an active construction site where various conservation techniques and design ideas are tested, where restoration training and courses are given, and where students themselves actually stand on the scaffolding. Five detailed plans by students from the Faculty of Architecture and the Built Environment are on permanent display here. The owner has taken ideas from these designs for the definitive restoration plan. Zijlstra: "It's great to see how the fieldwork inspires the students, and how their ideas in turn inspire the owners and administrators.” 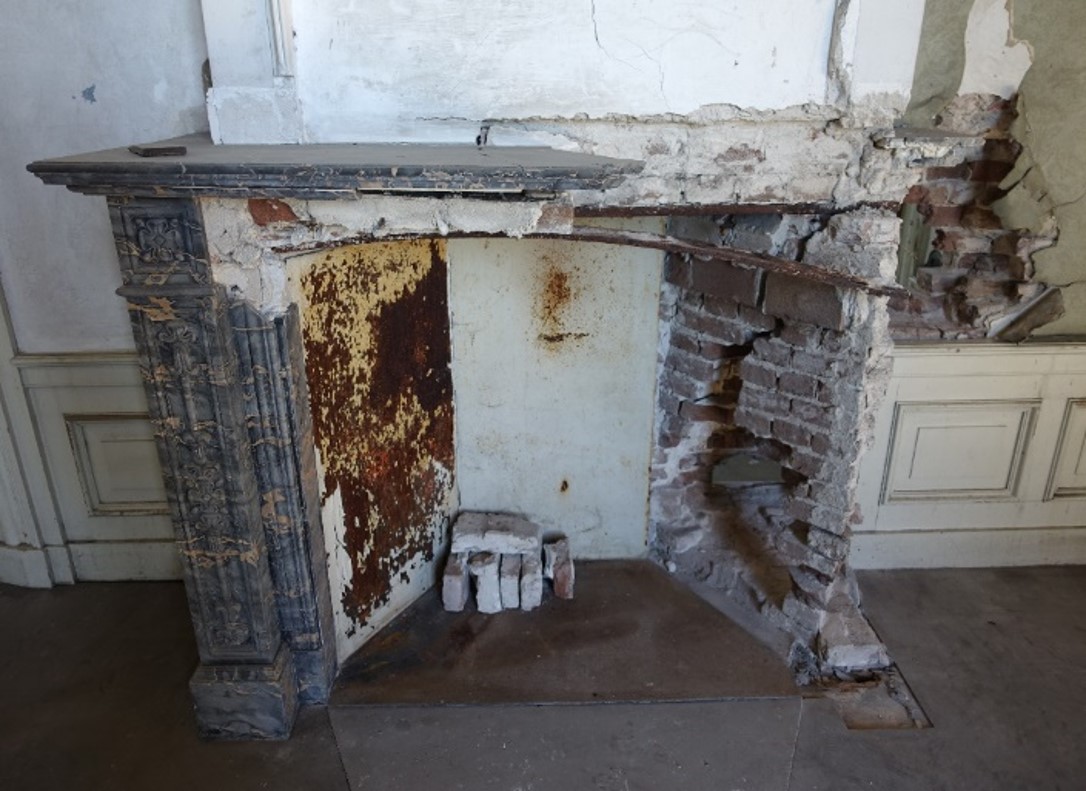 Original condition of parts of the country house Reuversweerd 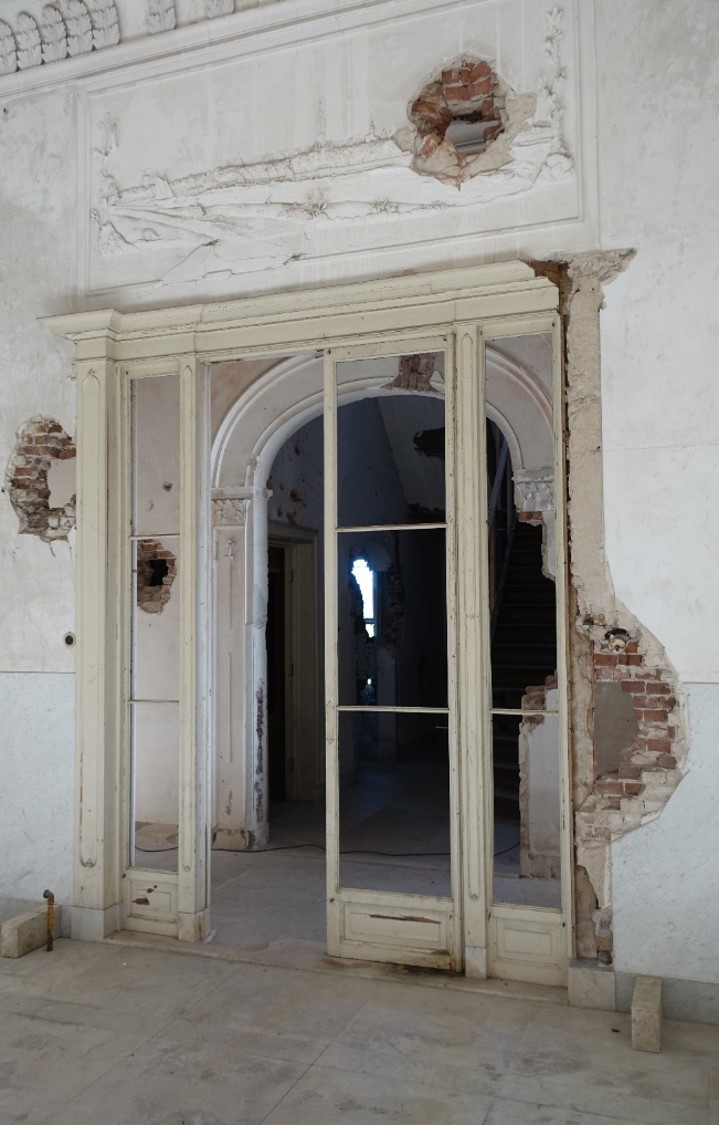 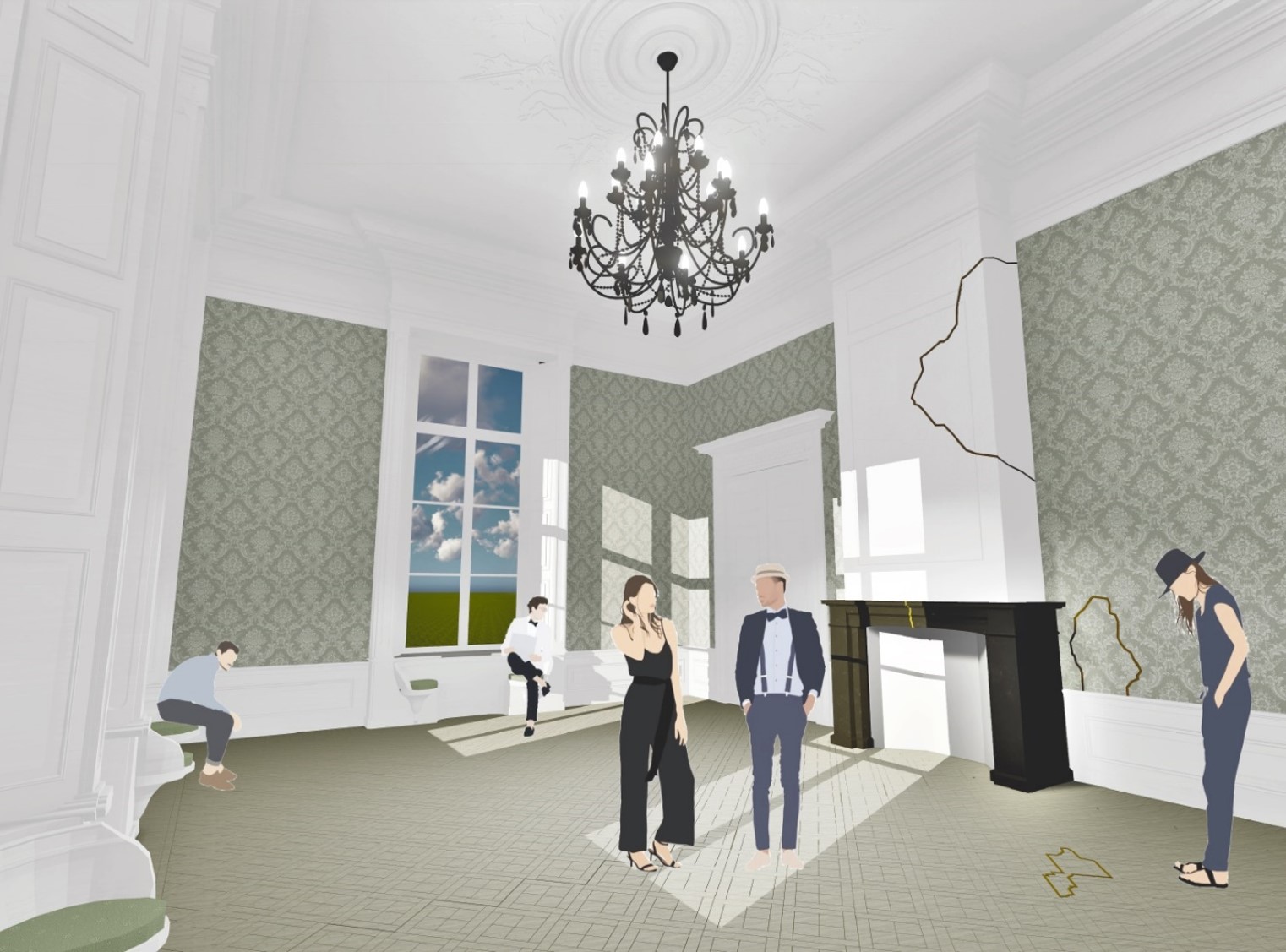 Within Youri Slaghekke’s plan for Reuversweerd, the damage suffered by the country house is gilded in gold through the Japanese ‘Kuntsugi’-technique

What emerges from all the projects and results is the importance of the location. You have to keep your feet on the ground, on the spot itself, in order to grasp the full potential of heritage. This also applies to the proverbial staying on the ground. If the province's heritage policy is organised more bottom-up, with specific attention for preliminary research, better selections and choices can be made. Moreover, such a working method makes it possible to focus on cooperation between different parties. Parallel to KaDEr, the Gelderland Heritage Alliance was set up for this exact purpose. In this alliance, the province of Gelderland joins forces with Gelders Genootschap, Gelders Restauratie Centrum, Monumentenwacht Gelderland, Stichting Oude Gelderse Kerken and Stichting Geldersch Landschap & Kasteelen. The alliance uses and secures the results from KaDEr and, for example, provides public access to the information from KaDEr on the website www.erfgoedalliantie.nl.

The province started the collaboration to be able to think about heritage in a new way, to be able to include the preservation of heritage in policies and to improve existing procedures. "This paradigm shift has been worked on hard, and the province, together with its partners, has moved in the desired direction," explain Paul Thissen and Tom Pegels of the province of Gelderland. "Design research has helped to find solutions that were previously difficult to imagine. TU Delft's role in all this was essential. Through the efforts of lecturers, the many activities in the Living Labs, the structurally high-level documentation, and the contributions of a large group of students, the province and heritage partners were continually stimulated to adjust the paradigm shift in the desired direction."

The project also worked out well for the students, concludes Zijlstra. "Working on location, addressing current issues and sitting around the table with the owners inspired the students even more. Their involvement, surprising ideas and the fact that they can think outside the box because they’re free from obligations have led to their contribution to real solutions for the future."

The conclusions from the project will be published 'KaDEr-stellingen' in  November 2021. The interim results can already be found at the Gelderse Erfgoedalliantie. From 18 May onwards, regular updates, mini-courses, student work and magazines will also be shared on this location.

In search of the plastic soup

The impact of algorithms