Professor Jaap Harlaar (3mE) had 25 students with no internships to go to but also saw a loomingshortage of ventilators. Combining the two brought about OperationAIR, a textbook example offast-track medical innovation.

On 12 March, professor Jaap Harlaar had to break the news to his 25 Master&#39;s students that theirinternships would not be happening. ‘The hospitals were preparing for the first wave of coronavirusand were forced to focus on that’, explains the professor in Clinical Biomechatronics. ‘That same day,I’d seen breaking news from Bergamo, where nurses were having to decide who could have access toa ventilator, because the equipment was in short supply. It was horrifying hearing professionalsunable to do their work properly.’

The Netherlands was facing the same threat, but if anyone could do something about it, then it wasdefinitely future clinical technologists, thought Harlaar, director of the Bachelor&#39;s degree programmein Clinical Technology and the Master&#39;s degree programme in Technical Medicine, both joint TUDelft, Leiden University Medical Center and Erasmus MC programmes. ‘Wouldn’t it be possible for usto make emergency ventilators for Covid-19 patients with our students? I immediately started ringingaround my medical network and the idea was embraced with open arms.’ That same evening, hesent his students another email, asking if they wanted to help work on the development of analternative ventilator. ‘After a restless night, I thought: let’s do it, I’ll never forgive myself if I don’t goahead with this idea.’ His students were thinking the same: ‘I got so many enthusiastic responses.Over the weekend, we put the first plans together and the project kicked off on Monday.’OperationAIR was a reality.

A total of around fifty students from different programmes joined the project. In groups, theyfocused on every aspect involved in the development, from design through to production planningand communication. ‘We needed expertise from all areas, so it was pretty much a case of everyonejoining in’, says Harlaar. He was pleasantly surprised by the students’ ability to self-organise. ‘Theyallocated working groups, chose a communication platform and invited lecturers to share theirknowledge. It was a joy to behold.’ 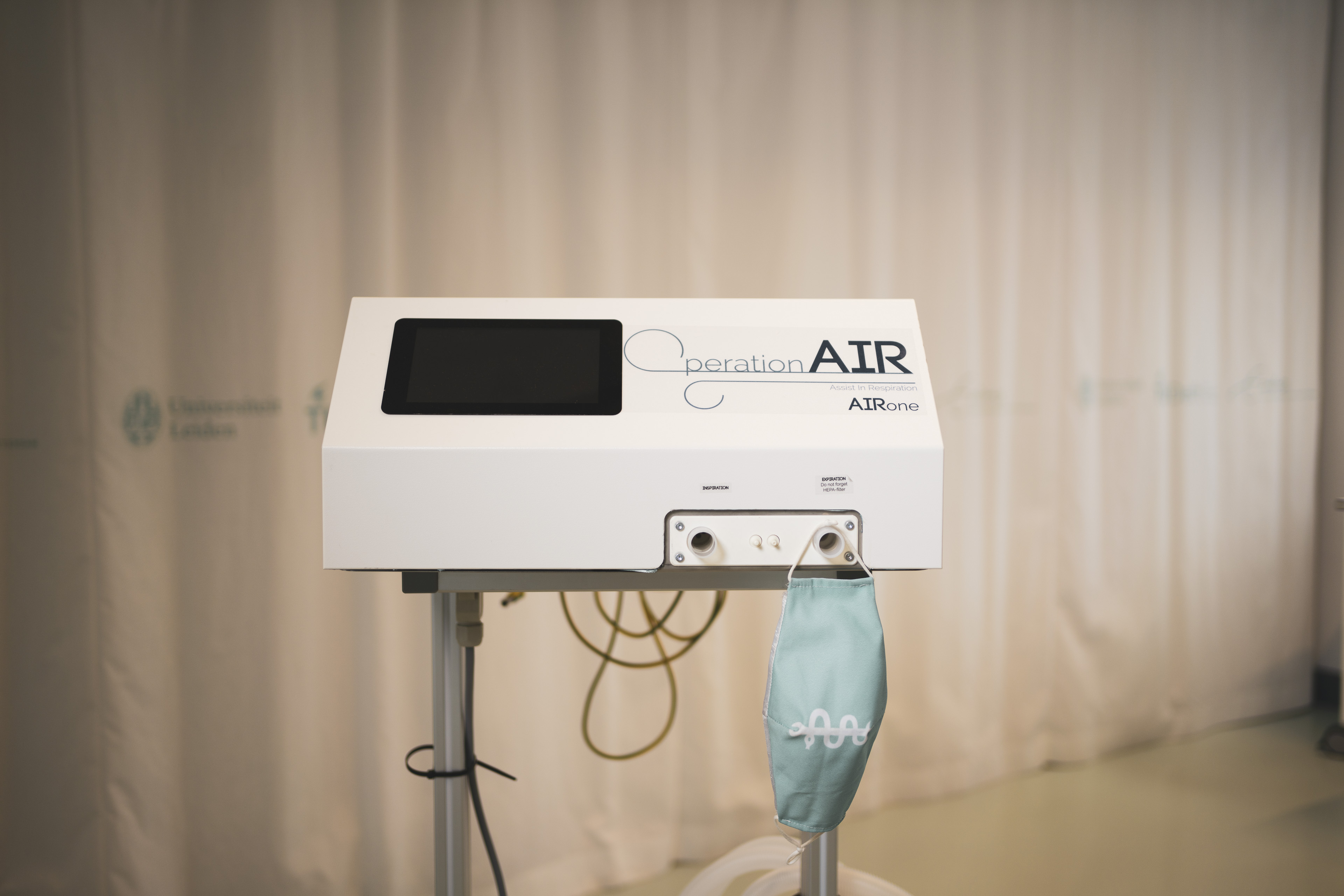 It’s a mind-set I see a lot in TU Delft students: they want to leave a world behind that’s better than it was before

‘Personally, I involved myself as little as possible in the content, focusing mainly on the process andtrying to think three steps ahead and call on my network where necessary. The students took a lot ofthe initiative themselves. They developed the design and prototype, the hardware and software,devised a production process, got to grips with the safety system and produced documentation forapproval purposes, prepared online training courses and support models, etc.’ As a result, there wasa working ventilator, the AIRone, in the space of just three weeks. ‘In the next two weeks, we didsome fine-tuning on the advice of clinicians, but the basic ventilator worked extremely well, whichwas a huge achievement. We showed that, when worse comes to worst, TU Delft and theNetherlands can pull it out of the bag.’Fortunately, it was not needed in the end. ‘That left us with mixed feelings. We would love to haveseen the ventilator fulfil such an urgent need. We’d done all the tests, up to the point of actually
using it for patients. Students were on hand to take the ventilators into the hospital and assist withtheir introduction. On order of the Ministry of Health, Welfare and Sport, we produced 80 of them –much less than planned – while it turned out that it was no longer really necessary for the first wave.’However, all of the documentation is available online as open source. ‘Everyone can make their ownversion, but will need to adapt it to suit the specific context. We made it to provide a solution for thesituation in the Netherlands. That makes sense, because we know the situation, the intensive careprofessionals, the infrastructure and regulations here. But you can’t suddenly start applying aconcept like that somewhere completely different.’

‘This does not in any way detract from the fact that the students learnt a huge amount. This wasaccepted by the Technical Medicine Board of Examiners as a replacement internship, ensuring thatmy students were awarded credits for it. The same applies partly to students from otherprogrammes. But it was especially motivating for them to be involved in something that had animpact in the short-term. It’s a mindset I see a lot in TU Delft students: they want to leave a worldbehind that’s better than it was before. That’s really powerful. They also don’t have huge egos andare willing to work together. It’s this sense of unity that enables such a team to operate at fulleffectiveness. Besides, they don’t have pre-set ideas yet and are capable of thinking outside the box.It was a great experience. They were difficult months, but also some of the best.’ 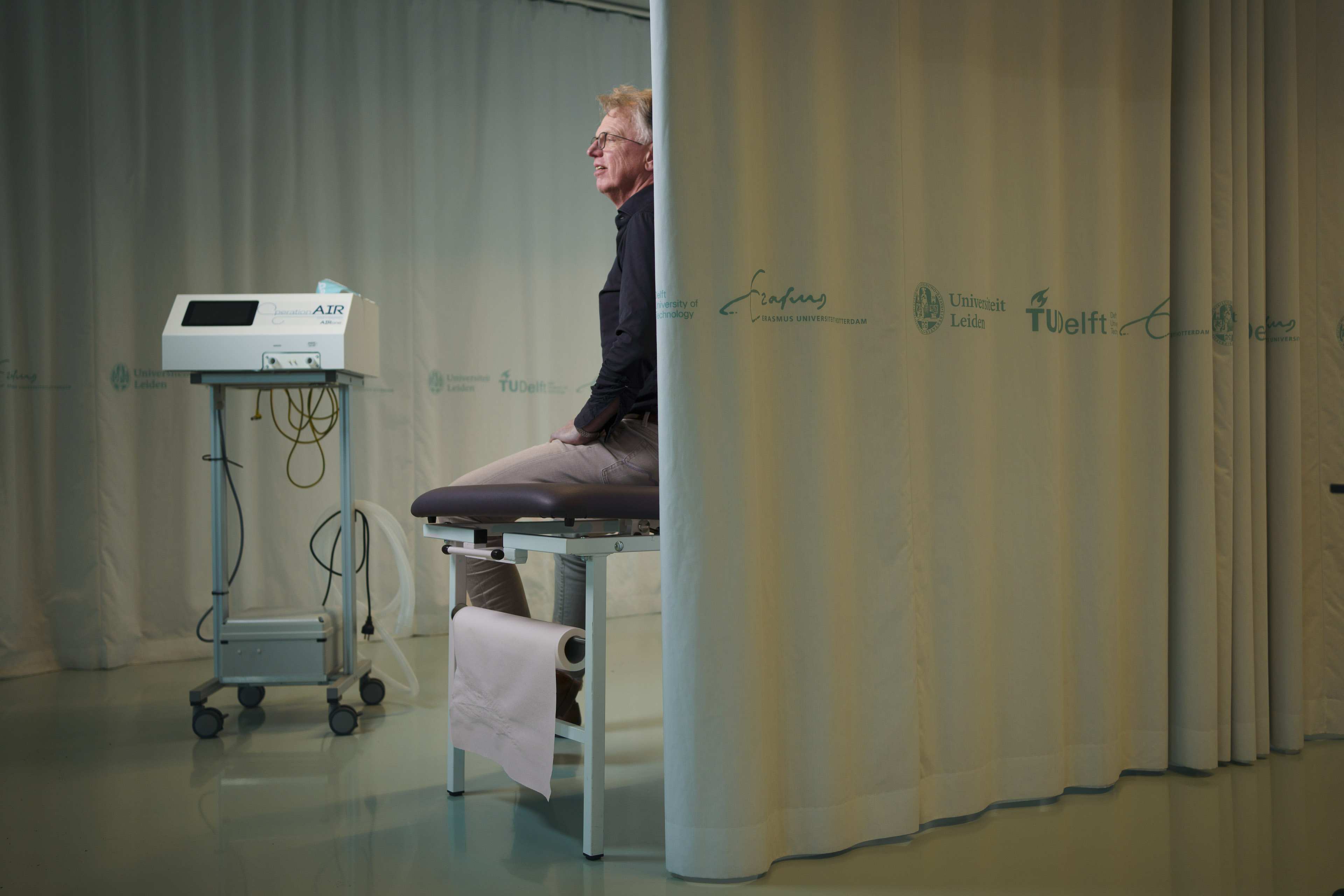 These were also months when his other teaching and research work practically came to a standstill.‘Online teaching also needed to be arranged for the rest of the programme. My teaching team tookcare of most of my duties in that regard. That means they also indirectly contributed to the successof OperationAIR.’ In the meantime, Harlaar has the relative peace he needs to devote himself to hisresearch again. Incidentally, he was also appointed as Medical Delta Professor in June. ‘In myresearch, I was already collaborating with the orthopaedics departments in Leiden and Erasmus MC. Inow have a part-time appointment at Erasmus MC and an honorary one in Leiden. This Medical Deltaappointment stresses the collaboration that matters so much to me’, he explains.
‘At Erasmus MC and LUMC world-class research is being conducted into osteoarthritis of the knee. Iwill be focusing on the role that (disturbed) biomechanics plays in that.’ He plans to do this in a newPrecision Biomechanics Lab. ‘We aim to very accurately record the biomechanical strain on the knee.Existing motion analysis equipment does that using reflective markers and optical cameras, similar tothose used to make animations in movies and gaming. But it&#39;s done with markers on the skin that canmove relative to the underlying tissue. This is why we plan to use x-ray equipment to view walkingmovements. By linking that to a biomechanical model, we will be able to precisely calculate the strainon the cartilage.’

‘We already know from in-vitro experiments that mechanics play a considerable role inosteoarthritis, but we don’t yet know what it means for individual patients, with specific knees andwalking patterns. Understanding that can help decide on treatments, especially for people morelikely to develop osteoarthritis at an early age. Ideally, you want to delay any knee replacement aslong as possible. Of course, there are alternatives, such as braces, knee joint distraction or walkingtherapy, but currently, we don’t know who will benefit from which treatment. That’s why we’redeveloping biomarkers for osteoarthritis in order to predict the course of the disorder in specificpatients. It’s a form of precision medicine.’ This is an example of improvements to healthcarethrough concerted action by what were previously separate specialist fields.

Collaboration and co-creation are vital for success

That is also the essence of the convergence, the far-reaching collaboration between universities andmedical centres in Rotterdam and Delft: connecting medicine with engineering, social and economicsciences in order to make new medical-technical solutions possible. ‘How can you bring thosedifferent worlds together to speed up the innovation process?’
Harlaar heads up the “Fast-track innovation” working group that aims to answer that question. ‘Inprojects like OperationAIR, but also in other projects, I’ve experienced at close hand what goes rightand what goes wrong in these processes. In order to achieve an effective dynamic betweentechnology-driven and problem-driven processes, you need to create scenarios in which there aremeetings between the different worlds at all levels. This won’t happen automatically. Everyone hastheir own approach and their own perspective. But collaboration and co-creation are vital forsuccess. If you remain isolated you will never achieve innovations that have impact.’ That issomething that the students who worked together on OperationAIR clearly demonstrated. 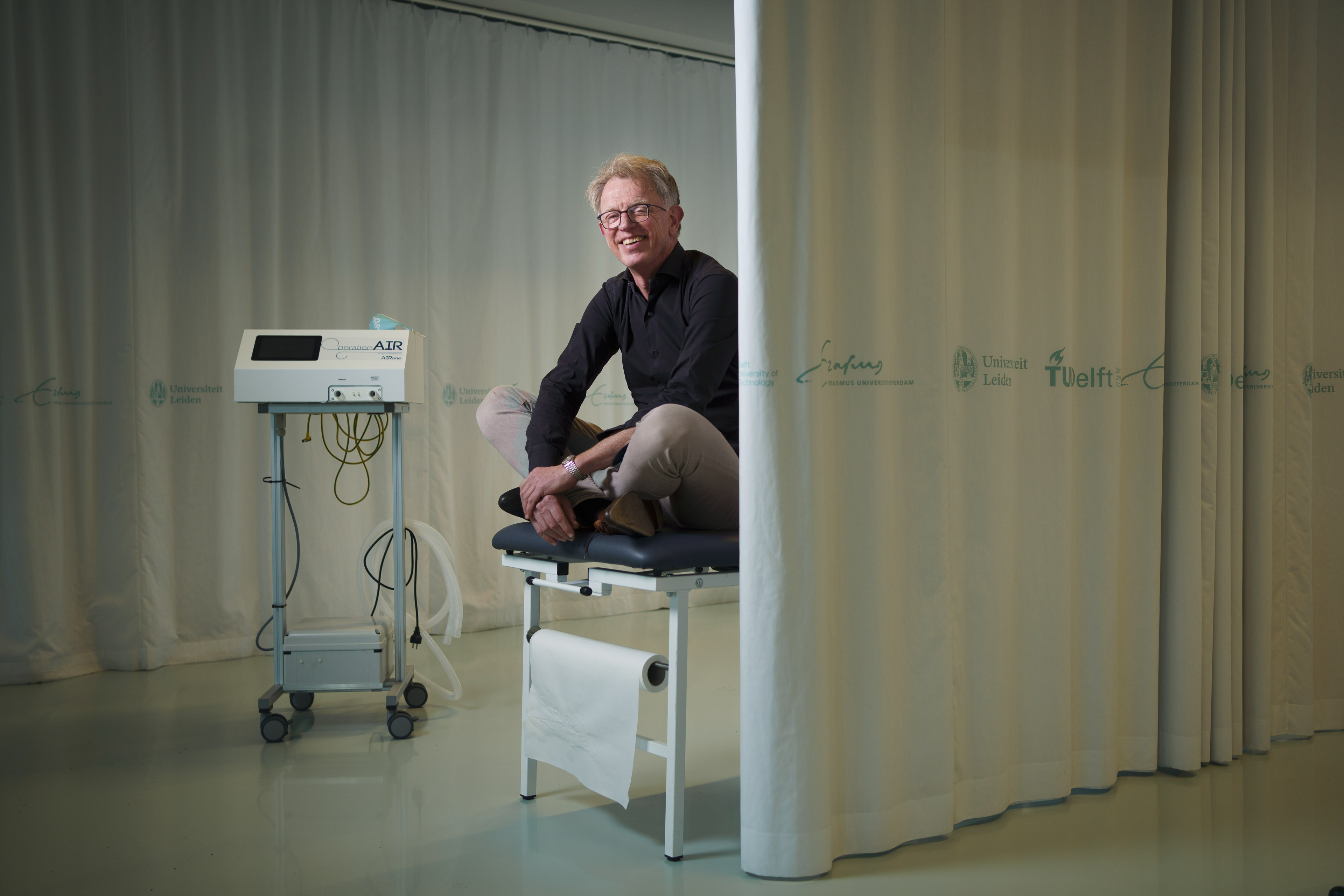 Inverse modelling – for improved medical imaging and much more