The new MARCH III by TU Delft student team Project MARCH has won the Cybathlon Experience in Düsseldorf, the international obstacle race for exoskeletons. Entrants from several countries competed in the test of robotic harnesses for people with paraplegia, ending on 29 September. Together with ‘pilot’ Sjaan Quirijns, who has had paraplegia since 2000, MARCH III achieved the fastest time and the highest number of points. Thanks to improvements to the suit and intensive training of its wearer, the team successfully completed a four-obstacle course in just under 9.5 minutes. Project MARCH gained particular plaudits for the independent functioning of its device.

Climbing stairs
The Cybathlon Experience was held over a number of days at Rehacare, the recent German trade fair for medical rehabilitation technology in Düsseldorf. Student and commercial teams raced to tackle four obstacles typical of those faced on a daily basis by people in wheelchairs, such as climbing stairs and sitting in or rising from a deep chair. MARCH III won three of the four components with the fastest time and most points, resulting in the best overall time and score.

Slope test
Lennart Schut is an Industrial Design Engineering student and team manager of Project MARCH. “From a technical point of view,” he says, “the incline test was our biggest challenge. Thanks to improvements to the ankle joint, there was now much more stability when climbing and descending the slope. We are incredibly proud of our win, but even more important for us is that the technology we have developed is contributing to restored mobility for people with paraplegia. Our ultimate goal is to make the exoskeleton accessible to everyone who would benefit from it. We see that as a big step towards a future in which these people no longer need wheelchairs.” 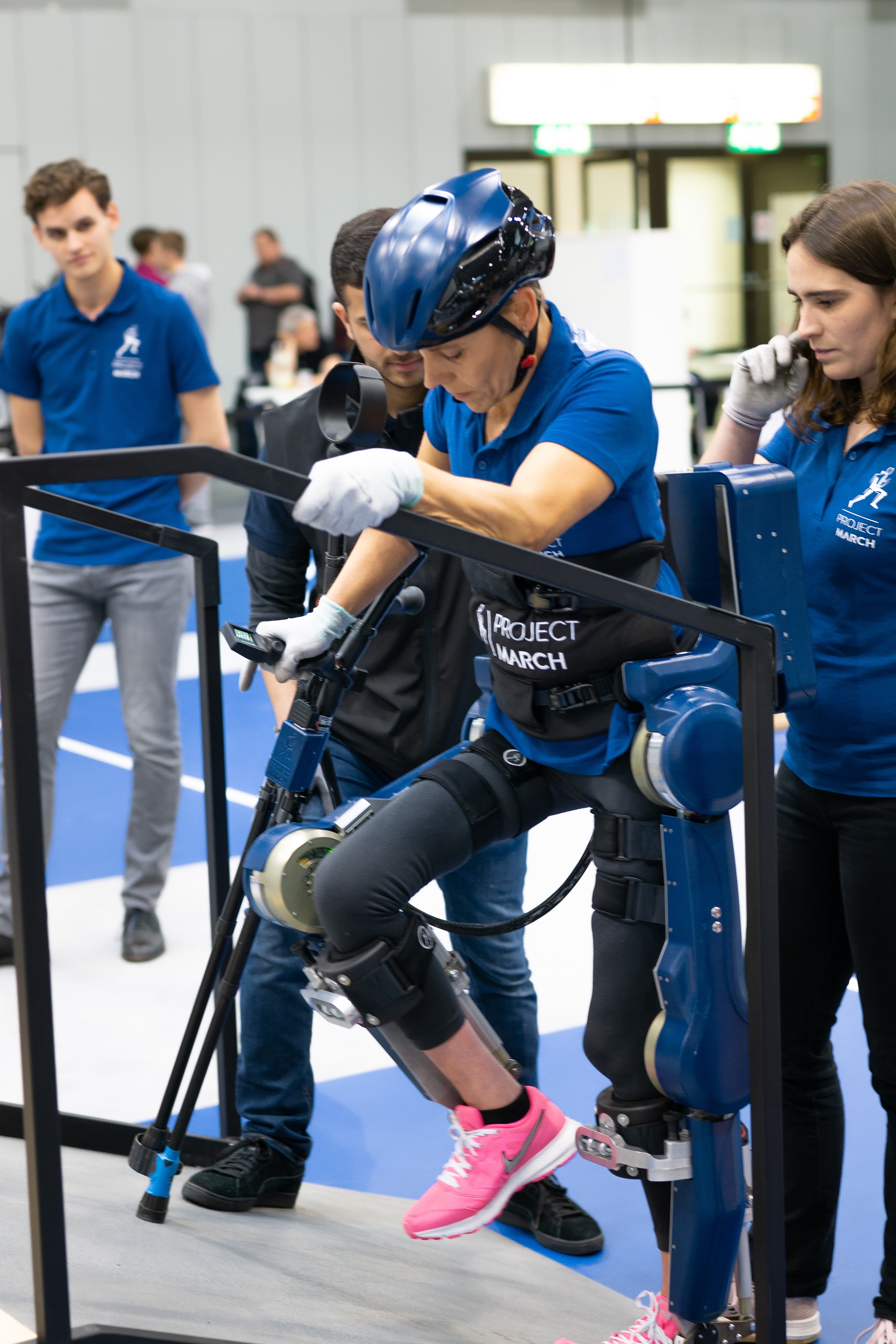 Everyday use
This is the third year in a row that a TU Delft team has been improving the MARCH exoskeleton series. Once again, a dedicated group of students worked entirely voluntarily on the new design and prototype for a full year. MARCH III incorporates significant enhancements to promote everyday usability and comfort. Its new functions respond even better to user needs. As well as the improved ankle joint, upgraded software now enables variable stride lengths for a smoother and more natural gait. And extra support points around the hip and waist provide better support and greater stability when walking. The abdominal plate and back supports developed specially for Sjaan Quirijns have also improved his trunk stability and walking control. “The refinements to this year’s exoskeleton hold out real promise for the future,” Quirijns confirms. “They look set to ensure that the everyday mobility problems currently experienced by paraplegic patients will one day be reduced significantly.”

The medical sector has also expressed its confidence in the future of the suit. Ilse van Nes is a rehabilitation specialist at Sint Maartenskliniek in Nijmegen, where Quirijns previously followed a recovery programme with a commercial exoskeleton. “For paraplegic patients,” she says, “exoskeleton technology not only contributes to better mobility but also improves their physical and mental condition.”

2020
Each year a new group of students from TU Delft designs and builds an exoskeleton as part of Project MARCH. Their next major trial is Cybathlon 2020, to be held in Zurich. To tackle its challenges, they will be working on an even better exoskeleton.