On September 1, 2020, part of the quay of the Grimburgwal in Amsterdam collapsed. The primary causes appear to be the different construction of the narrow quay, the locally deeper canal bed, and the weakening of masonry due to collisions. This is the result of the research conducted by a research team composed of experts from TU Delft, Deltares, AMS Institute, and SkyGEO, led by Mandy Korff (TU Delft/Deltares), on behalf of the City of Amsterdam. The full report with conclusions and recommendations for other quay walls in the city was published by the City of Amsterdam on April 8, 2021.

Amsterdam has many kilometers of historic quay walls. The quays - varying from 50 years old to as much as 300 years old - consist of a brick cantilever wall on a timber deck supported by three to six timber pile rows. The City of Amsterdam has the challenge of renewing its historic quay wall infrastructure. But which quays should have priority? The City of Amsterdam would like to learn how the knowledge obtained from the failure analysis performed on the Grimburgwal can contribute to a better understanding of the behavior of other quay walls in the city.

On behalf of the City of Amsterdam the researchers conducted the analysis (a so-called rapid assessment) for the collapsed quay. The used approach is what the consortium calls forensic engineering. Mandy Korff: "This approach was, among others, developed at TU Delft: if you research an incident or accident like a detective, you can very precisely and systematically trace back the causes, to learn from it and hopefully prevent such events in the future. In this case we wanted to gain technical knowledge about the causes and circumstances of the collapse. Based on our research findings, we can make recommendations for other quay walls. This knowledge can now be applied in Amsterdam and also in other cities.”

During the collapse, video images show how the Grimburgwal tilts forward over a length of 25 meters and disappears into the canal. The rows of timber piles that form the foundation of the quay appear to have been deformed and subsequently broken, causing the structure to collapse. This deformation of the timber pile rows appears to have been caused by a locally larger depth of the canal bed. “It’s very likely that the locally deepened canal bed is caused by boats that make a turn at this point of the canal”, the researchers state.

Also, the geometry of the quay should be factored in. The quay has a somewhat different structure and is narrower than other quays. A diving inspection – plus the short distance from the quay to the buildings - showed that it is very likely that part of the quay was only supported by two sequencing pile rows, instead of the three pile rows, which is much more common in such constructions. 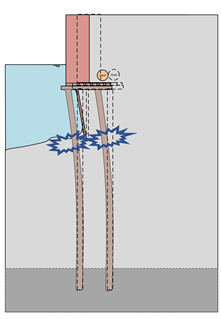 Also, there were pre-existing cracks in the masonry of the quay wall. These existing cracks reduced the ability to redistribute the different forces along the quay. The result was that the stronger sections of the quay wall (which did have three rows of piles) could no longer take the load.
The final push, the trigger, for the collapse was probably the renewal of the pavements in May and August 2020. The pavement renewal created an additional load on the quay. The roadworks on the pavement were the result of the deformation of the quay that was already occurring. 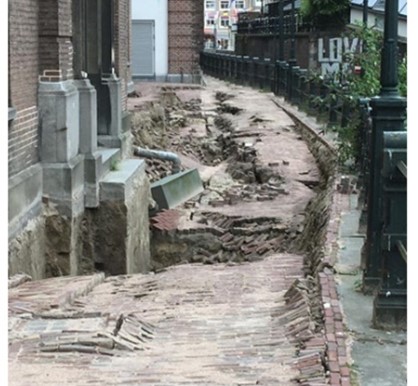 Photo just before the collapse

The researchers make several recommendations to better assess other quay walls in Amsterdam. Mandy Korff explains the most important ones: 'It should be identified if there are more narrow quays with perhaps only two rows of piles, quays with pre-existing cracks and/or quays with a deeper canal bed. These quays can be tested as a matter of priority and re-inforced with extra structure support if necessary. And assess carefully, either with the naked eye and/or with satellites, for changes and subsidence in the pavements of the street behind a quay. Before repaving, always analyze the cause of the subsidence that also includes changing behavior of the quay.

The research was commissioned by the City of Amsterdam and co-financed by NWO. Partners in the project are TU Delft, AMS Institute (Amsterdam Institute for Advanced Metropolitan Solutions), Deltares and SkyGeo.

The 3D files can be dowloaded here.