From the 3D printing of pills to a device that enables people without vocal cords to speak: the final bachelor projects by students in Clinical Technology demonstrate that technology is changing medical care as drastically as it is transforming our daily lives.

The final bachelor project is an ideal opportunity for students to get a taste of their field’s work environment. The closer they get, the better, according to Eduard van Belle, team leader of the ambulance dispatch centre at the Haaglanden Municipal Health Service. ‘To get a good idea of what we do in an ambulance, students joined us on some of our shifts. During this traineeship, they were able to see for themselves what we encounter in real life.’ Ambulance personnel work under difficult conditions, and that raises a series of research questions. For example, how can you listen closely to someone’s lungs on a noisy motorway? That was a question the students had already examined. This time it involved measuring oxygen saturation.

Always have a plan B 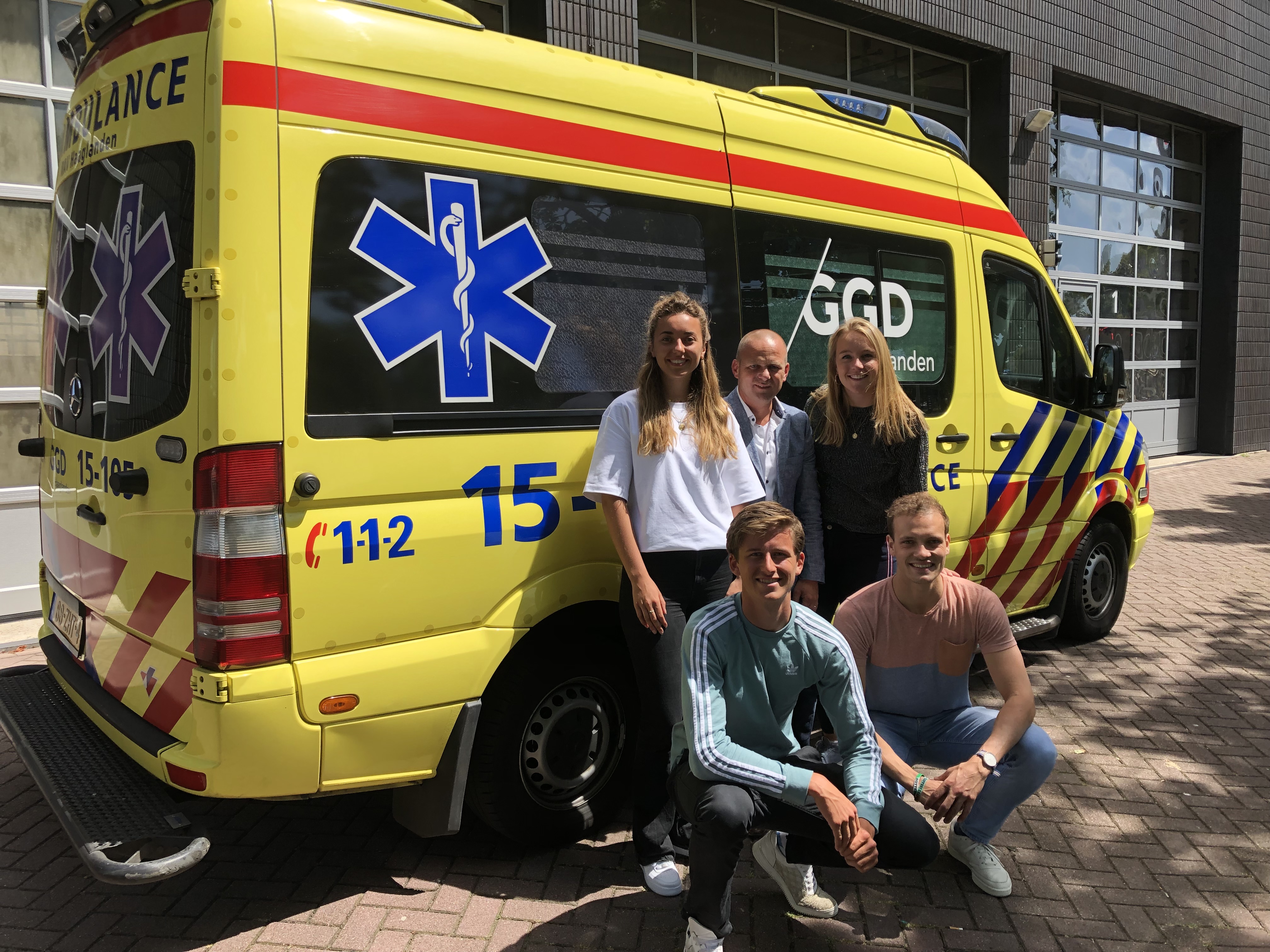 The saturation value tells us something about how well someone is taking in oxygen. This is usually measured by a sensor clipped onto the forefinger. ‘The finger measurement is plan A,’ Van Belle days. ‘But in an ambulance it’s important to always have a plan B. We can’t make an accurate measurement in cold weather, for example, or if someone has gone into shock.’ Students examined different brands and models of sensors for monitoring saturation to see if there are alternatives that could provide a representative measurement under such conditions. ‘They experimented with a forehead sensor that is also used in hospitals, and a kind of plaster that is usually used to make measurements on babies’ feet. They tested them on the earlobes of adult patients.’

Students were given a unique assignment by Guus van Wechem: not only is he a hands-on expert, but he graduated in mechanical engineering himself in the 1970s and always worked as a developer of new products for the car industry. When he was told that his larynx had to be removed last year as a result of a tumour, he immediately began to look into the available tools. ‘They are pretty rudimentary – there has got to be a better way,’ the engineer in him thought. Current voice prostheses are a kind of valve that is placed between the oesophagus and trachea. ‘When you blow air through it, part of the oesophagus treated by the surgeon vibrates and so you can talk, even though your voice sounds unnatural,’ Van Wechem explains. He has not had much difficulty speaking since his operation, but not everyone is that lucky. ‘People who have received radiation treatment can often only whisper, because the oesophagus will not vibrate anymore. Others are ashamed of their low-frequency voice following the intervention.’ 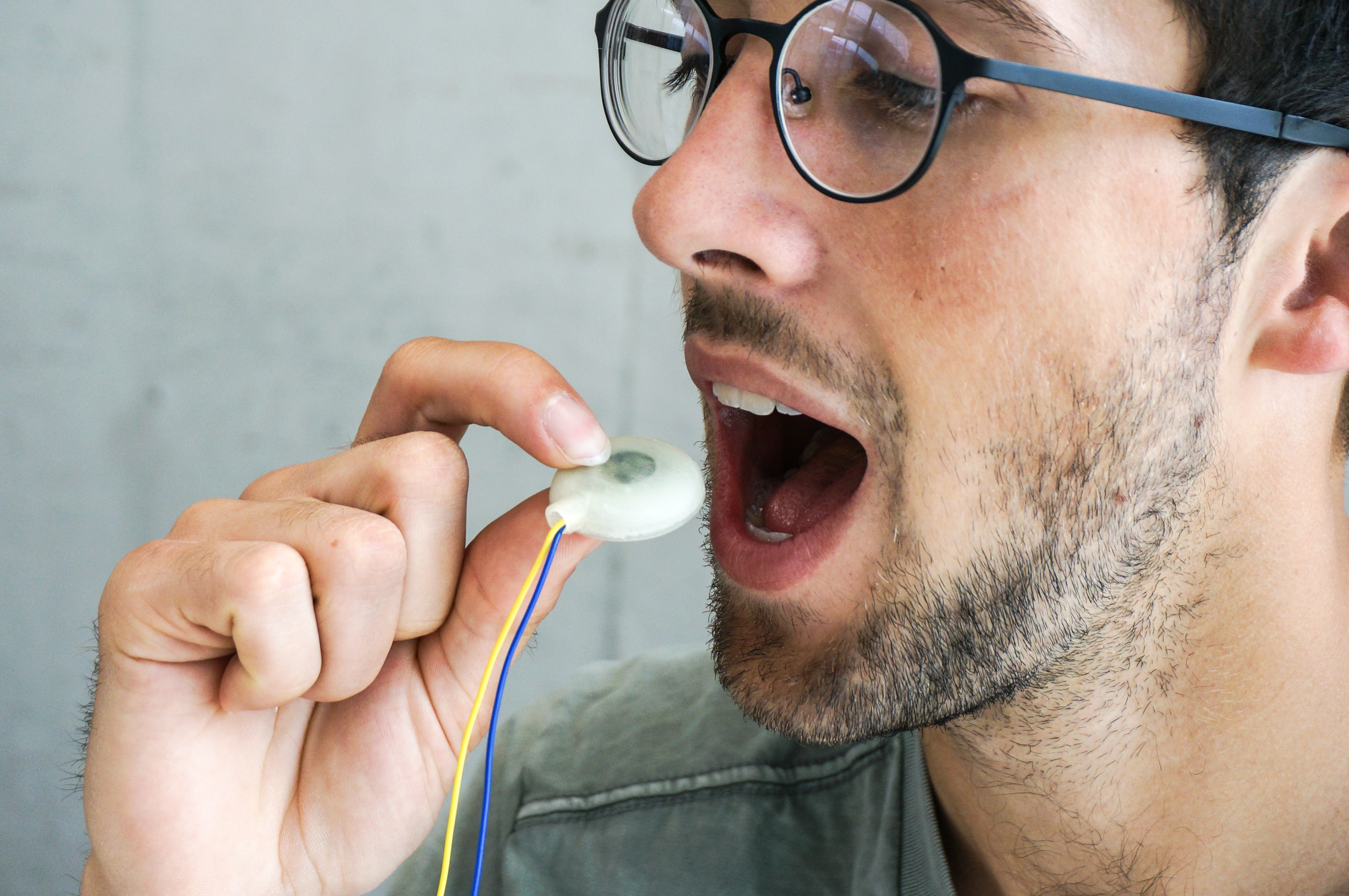 The surgeon can only reach the oesophagus with invasive surgery. Van Wechem therefore looked for a technical alternative to the vibrating oesophagus, preferably outside the body. His search took him to the Hanze University of Applied Sciences in Groningen, where design professor Ward van der Houwen invented the Voicemint, a small loudspeaker the size of a peppermint candy that you can keep in your cheek. ‘Your vocal cords vibrate at a certain frequency and you talk by moving your tongue, jaw and palate. This device essentially does the same thing. It emits a tone, similar to that of your vocal cords.’ The CT students tested whether it would be feasible in practice to produce an intelligible voice with this kind of speaker. There certainly is a market for this kind of solution: ‘There are at least 5,000 people in the Netherlands suffering from this problem and probably 300,000 around the world.’

Alternative solutions are welcome in pharmacies as well, for example when it comes to preparing medicines for children. ‘Children basically weigh anywhere from zero to 70 kilos. It’s impossible for manufacturers to produce pills in different doses for every weight category, but you cannot always treat children effectively with pills meant for adults,’ says Kirsten Schimmel, hospital pharmacist at the Leiden University Medical Center (LUMC). ‘What we used to often do is make drinks, but recent research has shown that children actually do not like that.’ So small pills are the preferred method, especially if children have to take pills for a long time. 3D printers are an excellent way of providing this kind of personalised medication. 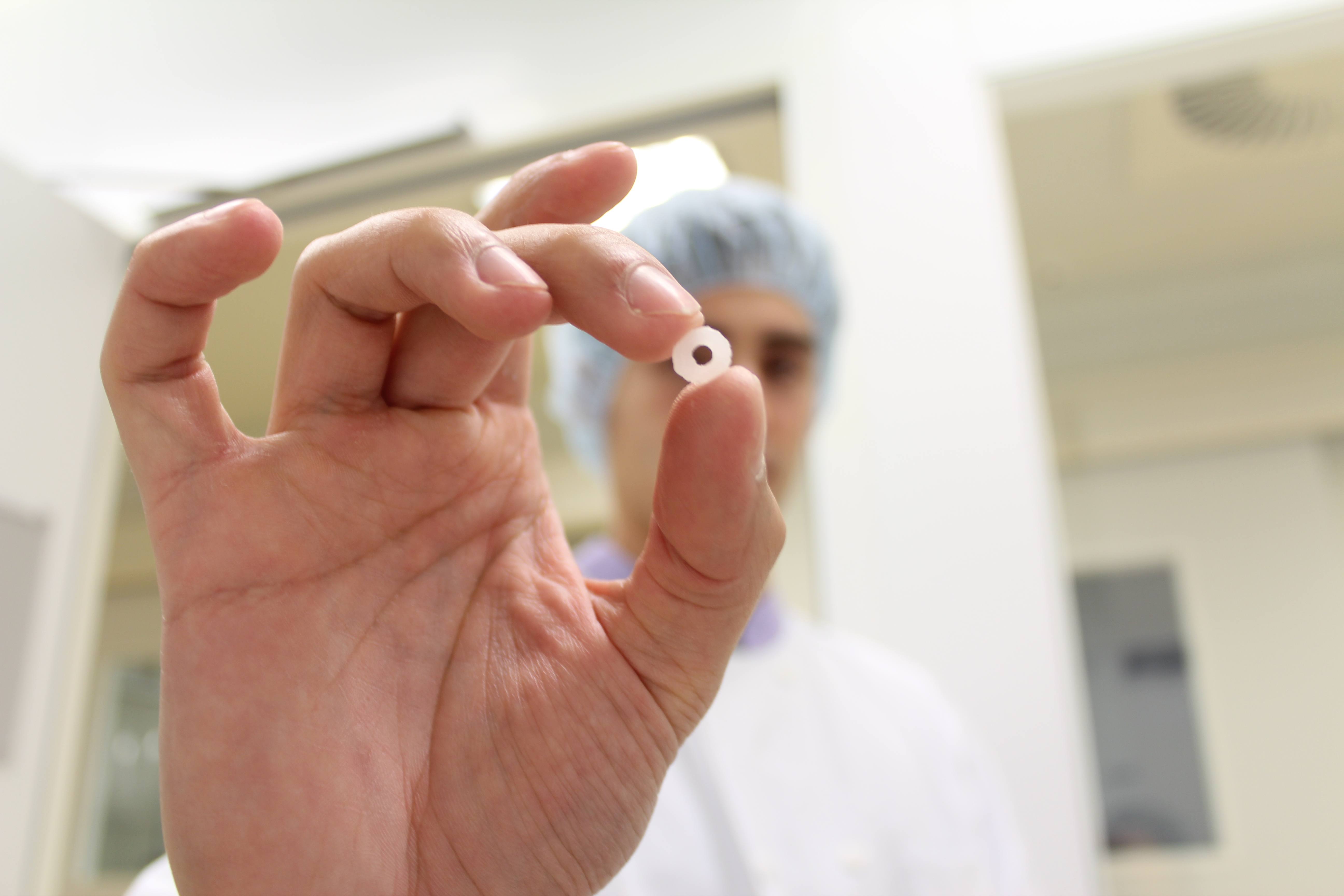 The LUMC was already researching this option. ‘We were already able to print pills, but they were difficult to reproduce well. We were not sure exactly which printer setting was causing this problem,’ Schimmel says. The students studied the impact of parameters such as the diameter of the pill, the resolution and the temperature of the nozzle in order to optimise the printer settings. They also looked at the solubility of the pills. ‘Pills have to dissolve within a certain amount of time so the body can absorb the active ingredients. There are European standards for this. We improved the solubility by switching from a flat pill to a donut-shaped one. That increases the surface area. Printing something in the shape of a donut: that is a typical example of something that you can do with a 3D printer which cannot be done by a regular pill machine.’

What we still refer to as a cast can be printed these days as well. At least, in the case of a special wrist brace for patients with carpal tunnel syndrome. They often wear a wrist splint to ease the pain. ‘After a few months, it becomes dirty. Then patients come back and want a new one fitted. That takes up a lot of the orthopaedic technician’s time, but that goes for the patient too,’ says Marit van Velzen, medical technologist at the Jeroen Bosch Hospital. ‘Last year we examined whether we could standardise the process, so that the brace remained patient-specific but was also easy to replicate.’

That research initially showed that a computer model of the hand could be made using ten measuring points, such as the length of the hand and the circumference of the wrist. A synthetic flat print can then be made of that, which can be wrapped around the hand. ‘This follow-up research aimed to investigate whether that process can be further simplified while remaining patient-specific,’ Van Velzen says. Students created a database based on test subjects and had the subjects measured by various researchers as well. ‘Because if a different orthopaedic technician does the measuring, will he or she come up with the same values and how would such a deviation affect the brace? In the end, they managed to reduce the number of measuring points to four that correlate with the dimensions of the brace. Theoretically, we will eventually record these values in a file so all patients have to do to get a new brace is pick up the phone.’ 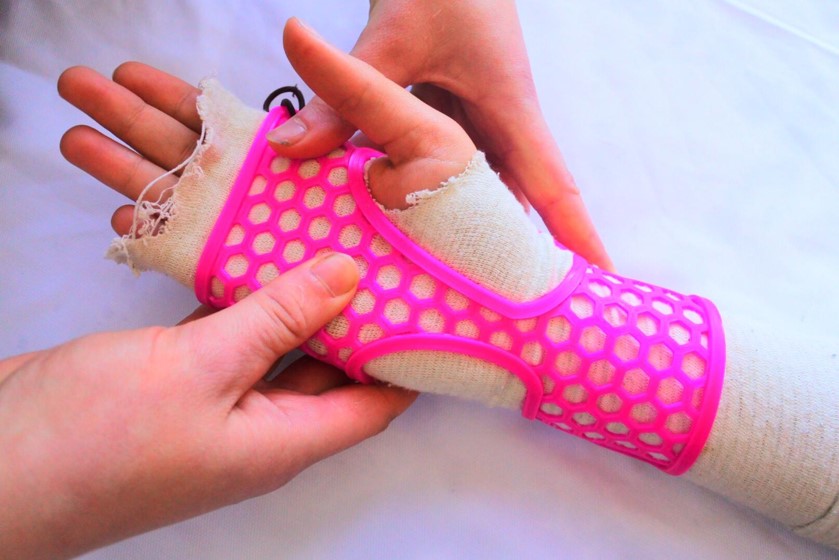 All clients are enthusiastic about this fairly new field and the programme. ‘This will produce professionals from which we are really going to benefit,’ Van Belle says. ‘Our work is increasingly evidence-based. It is nice that we have evidence that a different saturation sensor may be an improvement in the future.’ Schimmel is also happy with the outcome. ‘The students were highly motivated and independent. We were lucky that one of them had knowledge of 3D-printer programming technology, which is not a standard part of the bachelor programme. That gave the project an extra boost.’ She also noticed that technology can take over old skills. ‘Pharmacists, for example, can make capsules for children in any kind of dose, but usually they do not have the time or staff for that. So the new technology can do what used to be a skill but which is not available everywhere anymore.’

Van Velzen is a medical technologist herself, and she is the first to emphasise the importance of clinical technology. ‘We are witnessing a huge shift towards increasingly new and complex equipment for treating patients. It is difficult for doctors and nurses to digest it all. The fact that clinical technology covers that overlap between the technology and the medical world is of great added value. In the future, doctors and technologists will join forces much more frequently to decide on or carry out treatment and work together to find new solutions.’ She too enjoyed working with the CT students. ‘It is the first time during their education that they really had time to work on a complete project, and you could see them grow during these weeks. Den Bosch is quite a trek, but they did it anyway. It was really great to allow them to get a taste of what their education can mean in the real world.’

There is a great effort underway at the moment to firmly embed clinical technology in the healthcare sector. Annemijn Jonkman, chair of the Dutch Association for Technical Medicine (NVvTG), is one of the people spearheading this effort. An important milestone was the decision to include clinical technologists in the register for Individual Healthcare Professionals (BIG-register), so that they have the authority to carry out certain medical treatments. ‘We are continuously working with the Clinical Technology and Technical Medicine programmes so we can receive greater recognition as a professional group and provide even more transparent care in the sector,’ says Jonkman. ‘In my view, the clinical technologist is a professional who provides added value in all areas of healthcare: at the level of complex technical medical interventions, at the organisational level and as a key bridge builder between the industry and the clinic.’

If Clinical Technology is a recent programme, then programme director Jaap Harlaar sees himself as a clinical technologist avant la lettre. ‘I have always found myself at the interface between technology and medicine in order to improve patients’ lives,’ he says. He did this for thirty years at the Department of Physical Medicine and Rehabilitation at the Amsterdam UMC. Since 2017, he has been professor of Clinical Biomechatronics at TU Delft and programme director of the Clinical Technology bachelor programme. Harlaar dreams of a great future for the programme: ‘In 25 years we will have our own Health Engineering faculty, a medical-technical faculty where Clinical Technology will be the most important programme. At that point we will be delivering 400 clinical technologists a year.’ 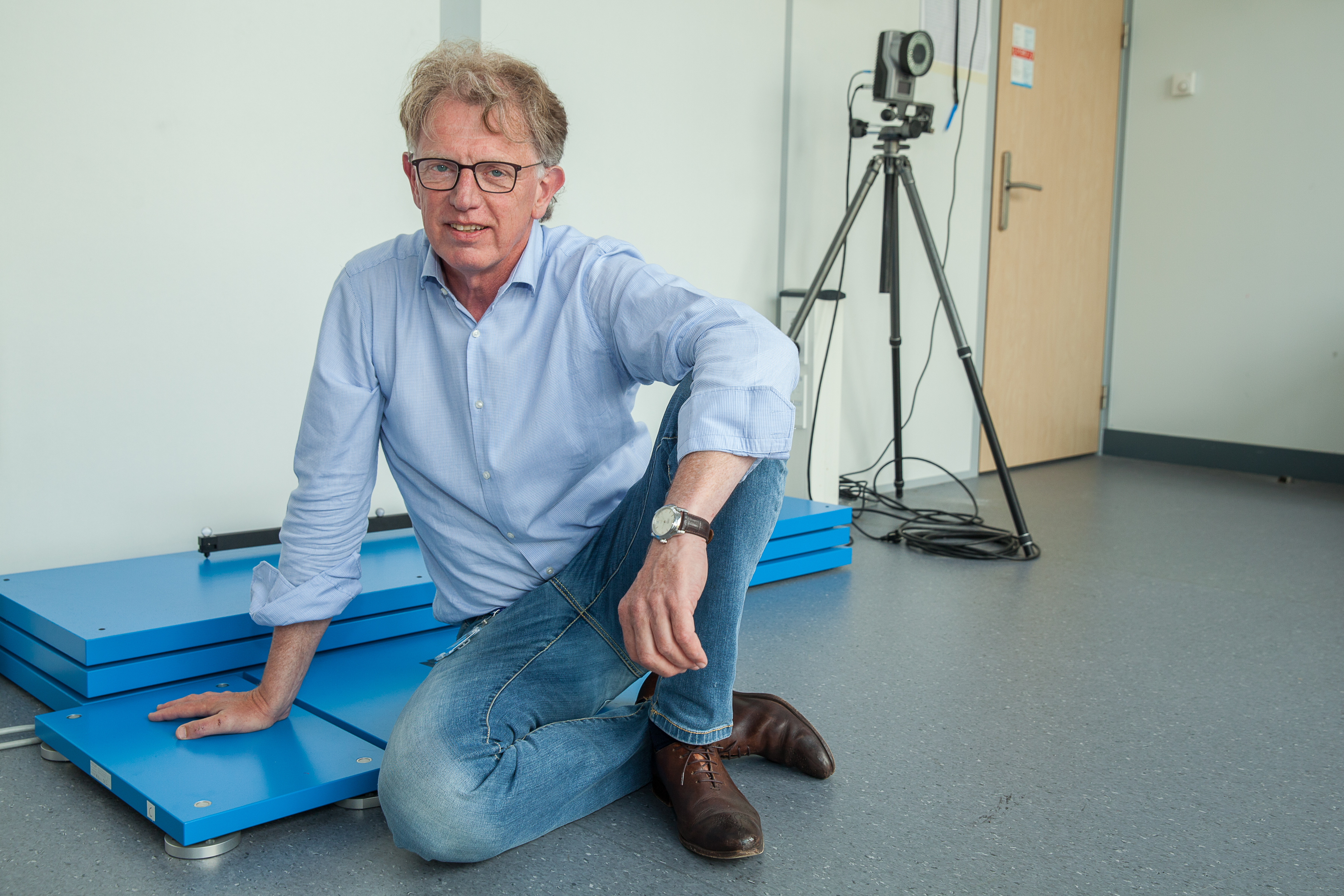