Simulations are an indispensable part of the engineer’s toolbox. Transport engineers such as Dr. Dingena Schott (Dept. of Maritime and Transport Technology) use a variety of modelling methodologies to predict the behaviour, wear, stability and performance of the structures they design well before they are fabricated and tested in practice. Not surprisingly, it is essential that the model suits the specific material system and that it is calibrated on experimental parameters that define the material. Calibration is often done by hand and can be quite time consuming. So, Schott joined forces with Dr. Alejandro M. Aragón (Dept. Precision and Microsystems Engineering) to employ algorithms inspired by the principles of biological evolution to take care of the calibration step in an automated and fast fashion. Their long-term ambition: bridge the gap between different model methodologies of different types of materials so that material interactions can be introduced into the modelling. Postdoctoral research Dr. Huy Q. Do, hired on their cohesion project ‘Enabling Advanced Structural Optimisation in the Transport Domain’ was remarkably successful in just a year’s time, not in the least in explaining the complex topic to a broad audience.

Taking a first step to combine two modelling methodologies was a very suitable topic for a cohesion project. We’ve now proven that our automated methodology works.

A picture featuring the design of a grab is prominently displayed in Schott’s office. Although she jokes that her life isn’t all about grabs, Schott often refers to the picture when explaining the principles of modelling in structural engineering. She really need not be modest about it: although it looks just like any other grab to an untrained observer, this design for a new generation clamshell-type grabs is a bona fide breakthrough. It reduces the unloading time of port vessels by at least 10%, winning the International Bulk Journal’s Innovative Technology Award in the category Cargo Handling and a Red Dot Award. ‘While finite-element modelling (FEM) is the method of choice to support designing the structure of a steel tool such as a grab, it can’t really be used to model the behaviour of the material it is grabbing, like sand, coal, ore or grain.’ For such granular materials, a technique called discrete-element modelling (DEM) is used. It calculates the forces between the particles and on the interface between particles and structure. As such it can capture the dynamic behaviour of the tool while it is grabbing the material.

Modelling methodologies talking to each other

Schott brings a box full of wood pellets to the table to explain how different questions require different modelling methods: ‘If a factory wants to move so many tonnes of these wood pellets, it’s easy to calculate the required size and speed of the conveyor. If you want to determine the structural properties of the conveyor that are required to reliably and safely hold this amount of wood pellets, FEM could be a useful tool. However, if you want to know if and how much material dust is created, how the pellets behave while being transported and how they deform under the forces at play, one needs DEM.’ While both modelling methodologies are well-known and established, it is not easy to fully combined them. This prevents researchers to include the actual deformations of the structure while in contact with granular material in their models. Schott: ‘We were looking to develop a framework to get the two modelling methods to talk to each other.’ In 2015, when the cohesion project was devised, only a single publication existed in the literature on combining DEM and FEM.

We were looking to develop a framework to get two modelling methodologies to talk to each other.

Where to start? In DEM, granular particles are modelled in a simplified way, as spherical elements. To ensure this simplification is trustworthy, it is first calibrated to experimental data. In practice, this is an iterative trial-and-error procedure of adjusting the input parameters until the DEM simulated results match the experimentally determined bulk behaviour. It is done by hand and takes a lot of time. Covering a grid of possible parameters can take as much as weeks. The single simulation on Schott’s grab poster took no less than 24 hours to make. Still, it is an essential step: an insufficiently calibrated model could yield the wrong results and waste a lot of time and effort. ‘On route to bringing FEM and DEM together, we decided that the first milestone should be automating and speeding up the calibration procedure.’ Calibrating model parameters to experimental data is essentially an optimisation challenge: from a range of possible parameter values, which one gives the optimum outcome when plugged into the model and applied to the calibration measurement? And so, Schott embarked on finding expertise in optimisation algorithms. At the Structural Optimisation and Mechanics group of the Dept. of Precision and Microsystem Engineering, she found Aragón.

The first milestone was automating and speeding up the model calibration procedure. And so, I embarked on finding expertise in optimisation algorithms.

Aragón suggested to use evolutionary algorithms, in particular genetic algorithms. These are search and optimisation algorithms inspired by Darwin’s well-known principles of evolution through natural selection. For example, where other optimisation algorithms define a single candidate parameter and look for a better one to replace it with, genetic algorithms define a population of candidate solutions. This population evolves through several generations through selection, crossover and mutation processes – all inspired by evolution seen in nature. ‘The major advantage of genetic algorithms is that we do not need to define a mathematical description of how the input parameters vary to direct the search for better solutions. As long as we can quantitatively represent the ‘fitness’ of an individual candidate solution, these evolutionary algorithms search for the fittest solutions in a broad region of the design space. We start off with a completely random sample of candidate parameters and let evolution take its course.’ In the case of the cohesion project, Schott and Aragón weren’t only looking for the optimum calibration parameters but also for a fast algorithm. ‘So, the problem turned into a two-objective optimisation problem in which we wanted to minimise both model error and simulation time. By coupling the evolutionary search with so-called Pareto optimality, it is possible to capture the trade-offs between the two considered objectives. 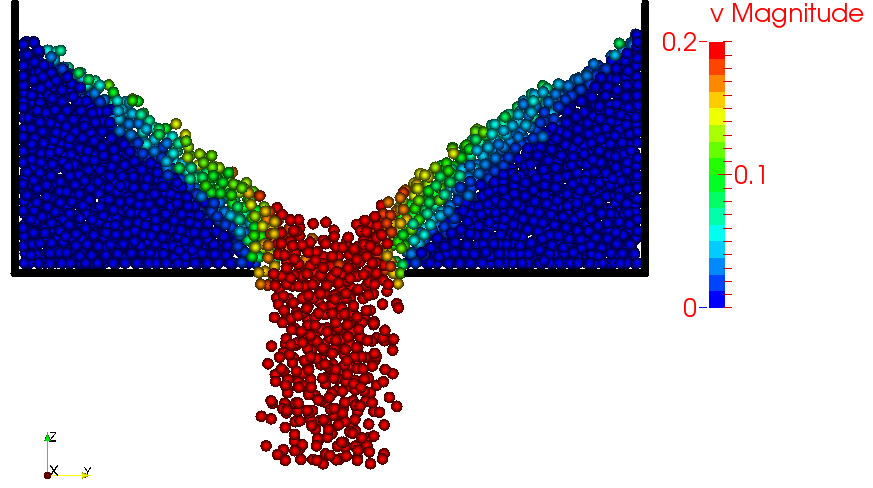 As genetic algorithms are very general and can be applied to all imaginable application domains, the project progressed smoothly. Aragón: ‘The truth is, I used genetic algorithms during my PhD project, but I have moved on to other topics since then. Huy spent a lot of effort to update the code I wrote so that it works with current C++ compilers.’ Huy: ‘I have a background in structural modelling but DEM was new to me. I had to quickly familiarise myself with the topic.’ All this makes it ever so remarkable that within the cohesion project timeframe of just one year, Huy succeeded in getting solid results and publishing them. He surprised his colleagues in another way too: to explain his results to people less familiar with the topic, he created a 5-minute animation for the international Powders & Grains conference, where it promptly won a Best Video award. Schott: ‘We were amazed by the response it got. The topic is not that easy to explain; experts need a lot of words to do so. Huy’s animation really gets the message across.’&nb

To explain his results to people less familiar with the topic, Huy created a 5-minute animation. It really gets the message across.

The one-year cohesion project was over all too quick. ‘Towards the end of the project we had shown the potential of the automated framework but there was still much to do.’ Schott found funds to extend Huy’s appointment for two more years, allowing him to bring the project a step further. Huy: ‘We’ve now proven it works. We’ve shown that we can arrive at the right model parameters by validating the outcomes of the algorithms against experimental data, in this case for free-flowing quartz sand.’

How do the researchers look back at their cohesion project? Aragón: ‘Taking a first step to combine two modelling methodologies was a very suitable topic for a cohesion project. It’s not only a mix of fundamental science and application-related aspects, it’s also so early in its development that it’s difficult to attract a commercial partner or pinpoint a target application.’ At the moment, a PhD student and guest researcher in Schott’s group are already using the cohesion team’s approach to automating the model calibration. ‘It makes using DEM easier.’ In the future, the researchers would like to include various interactions between the granules: ‘Our framework is independent of such features but they could introduce additional parameters that need to be optimised, thus making the simulation more time consuming. We’d also like to plug different optimisation algorithms into our methodology, in order to see which one works best for our purposes.

Dr. Dingena Schott (Dept. of Maritime and Transport Technology) is associate professor at TU Delft on transport and logistics. She obtained her PhD in 2004 on the homogenisation of bulk materials in mammoth silos. She is fascinated by the complex behaviour of granular materials and the interaction with equipment operating in a logistic context. In 2007 she started the DEMlab@TUDelft to model, calibrate and validate granular materials for enabling simulation supported design for cargo-handling equipment on an industrial scale. Since then she has worked on developing calibration frameworks and modelling particle-based systems in various design contexts including terminal designs for particulate material and an award-winning new grab design. Her main research interests include machine-cargo interfaces, simulation supported design, biomass materials and energy transition-driven handling and logistics. 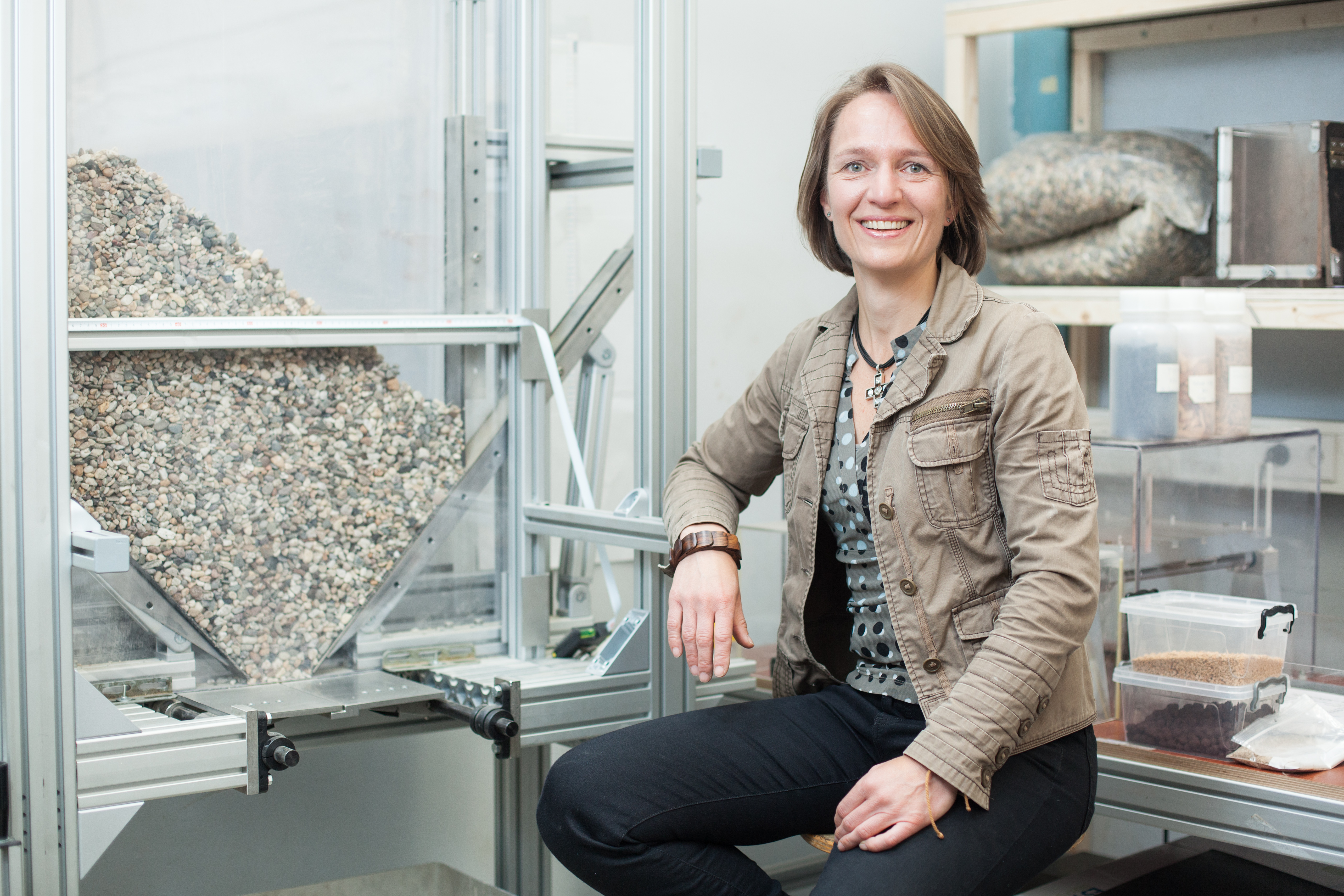 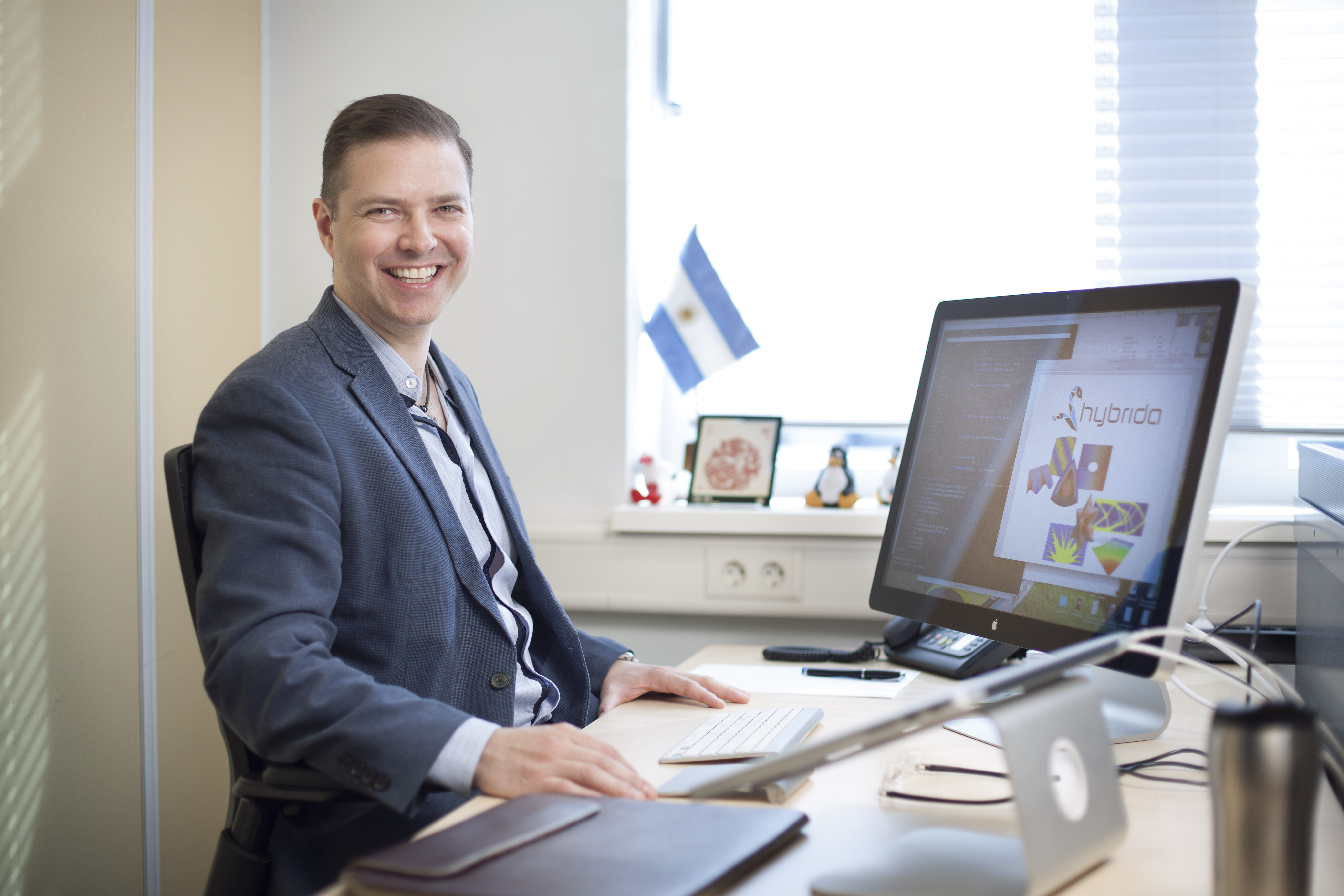 Dr. Alejandro M. Aragón (Dept. Precision and Microsystems Engineering) received his PhD in 2010 from the University of Illinois at Urbana-Champaign (UIUC). His doctoral dissertation focused on the computational design of microvascular biomimetic materials. Next, he held two postdoctoral appointments, conducting research on the computational modelling of heterogeneous materials (UIUC) and computational contact mechanics (EPFL, Switzerland). In 2014 he joined TU Delft as assistant professor. He works at the boundary between computer science and engineering, focusing on the creation of new enriched finite-element technology and its application for solving complex engineering problems.

Dr. Huy Q. Do (Dept. of Maritime and Transport Technology) obtained his MSc degree from the University of Stuttgart (Germany) in 2009 and his PhD from the Ecole Polytechnique Federale de Lausanne (Switzerland) in 2013. As a structural engineer, his expertise is in finite-element software development, computational structural mechanics, constitutive material modelling, finite element & isogeometric analysis, homogenisation techniques, numerical characterisation of cementitious composite microstructures, and analysis & design of reinforced concrete structures. 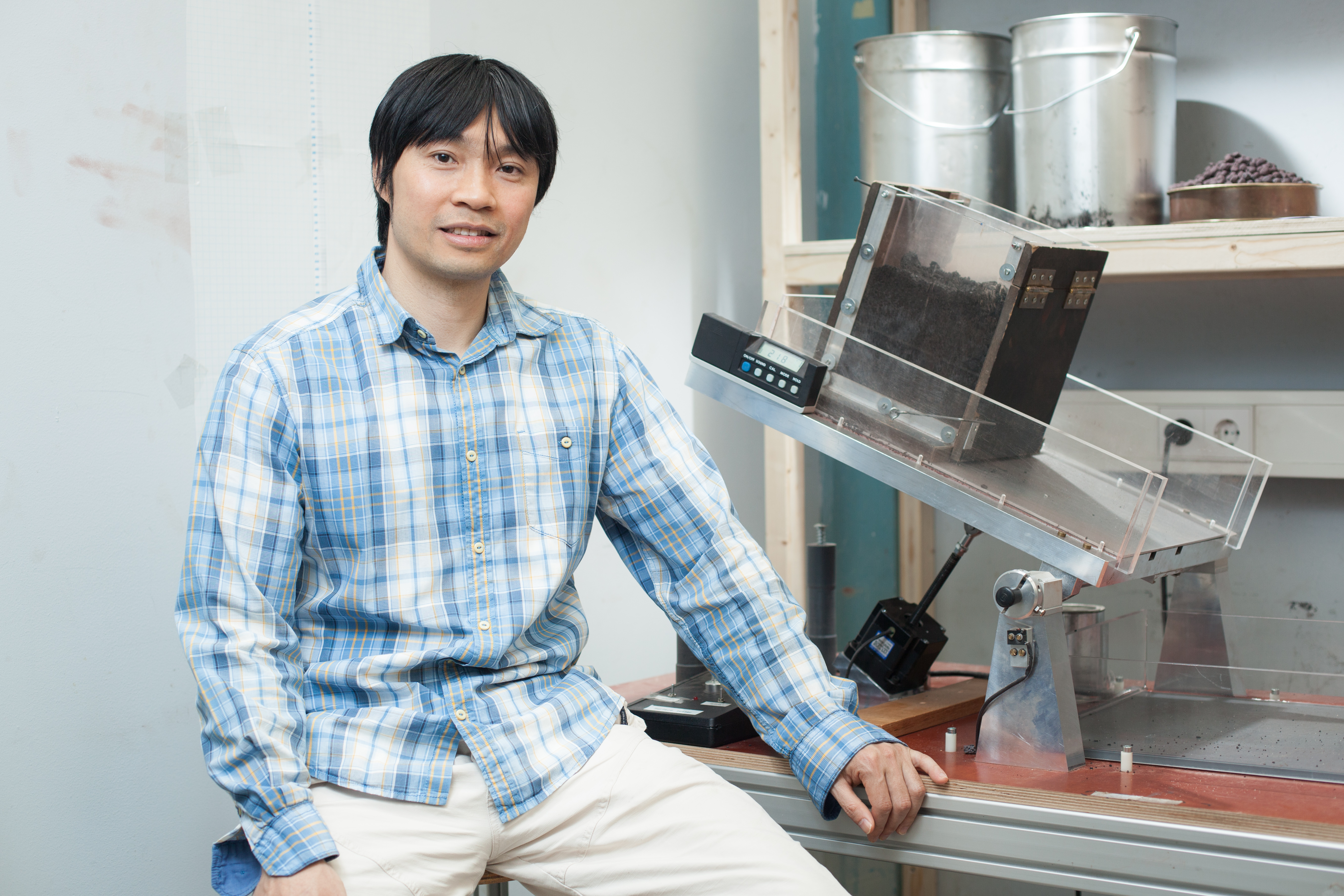 For the award-winning animation

3mE Cohesion projects
The cohesion projects were launched in 2014 based on an idea by Dean Theun Baller, the aim of which is to encourage interdisciplinary cooperation within the faculty. A good engineer, after all, is inherently good at working with others, and most innovations take place on the cutting edge of disciplines. The cohesion projects give young researchers the opportunity to ask for funding for projects, on the condition that they work together with colleagues within the faculty and outside their own discipline. Mechanical Engineering, Maritime Technology and Materials Science have proven to be extremely suitable for unexpected cross-overs with surprising outcomes.