It didn’t go as planned, Dr. Cornelis van de Kamp (Delft Centre for Systems and Control) explains when looking back at the original ambitions of the cohesion project ‘Artificial Muscles: a Physiological Mechatronics approach’. The project, which he submitted together with Dr. Jens Kober (Delft System for Systems and Control), Prof. Heike Vallery (Dept. Biomechanical Engineering) and Dr. Hassan HosseinNia (Dept. Precision and Microsystems Engineering), revolved around a new type of ‘soft’ robotics inspired by the example of humans. In collaboration with Dr. Michael Fritschi (Delft System for Systems and Control) a unique discovery was made: a spring that can sense the extent to which it is compressed or extended. It turned out to be such an overwhelming success that Fritschi and Van de Kamp decided to change course. Since November 2017, the two are full-time entrepreneurs, quickly putting their start-up company on the map. SpringScan BV develops smart springs that enable mattress producers to tailor their mattresses to the individual customers. And that’s just the start. 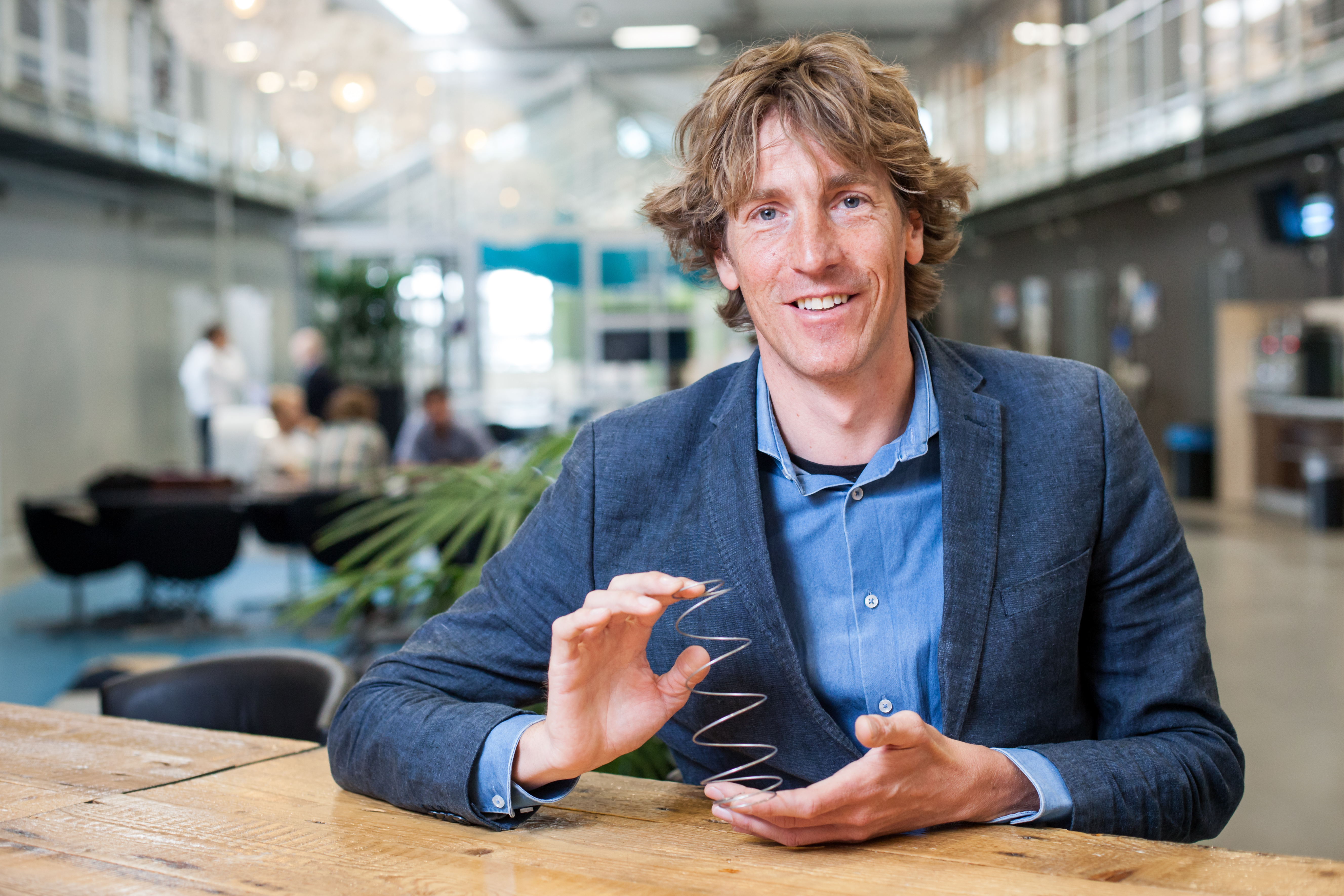 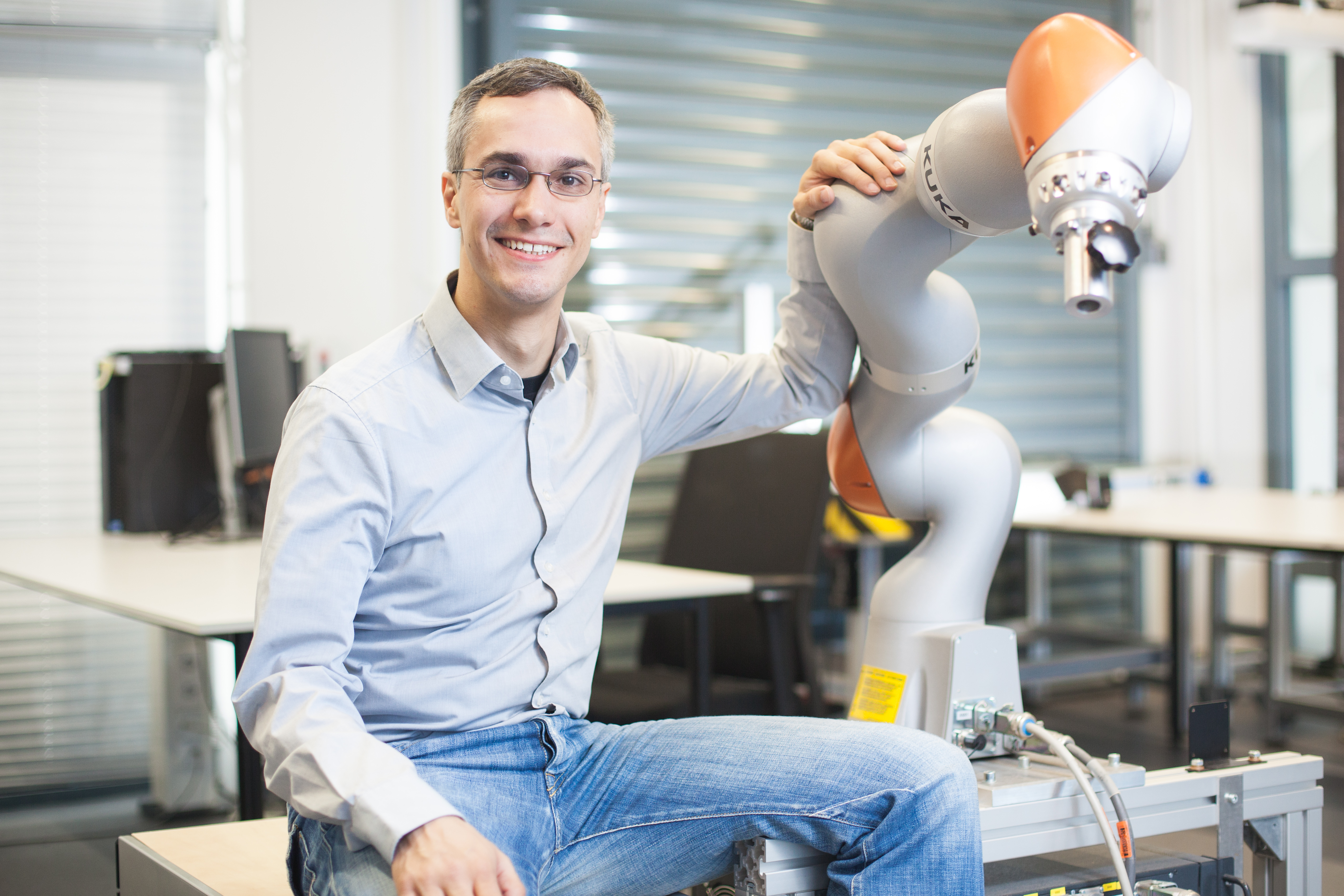 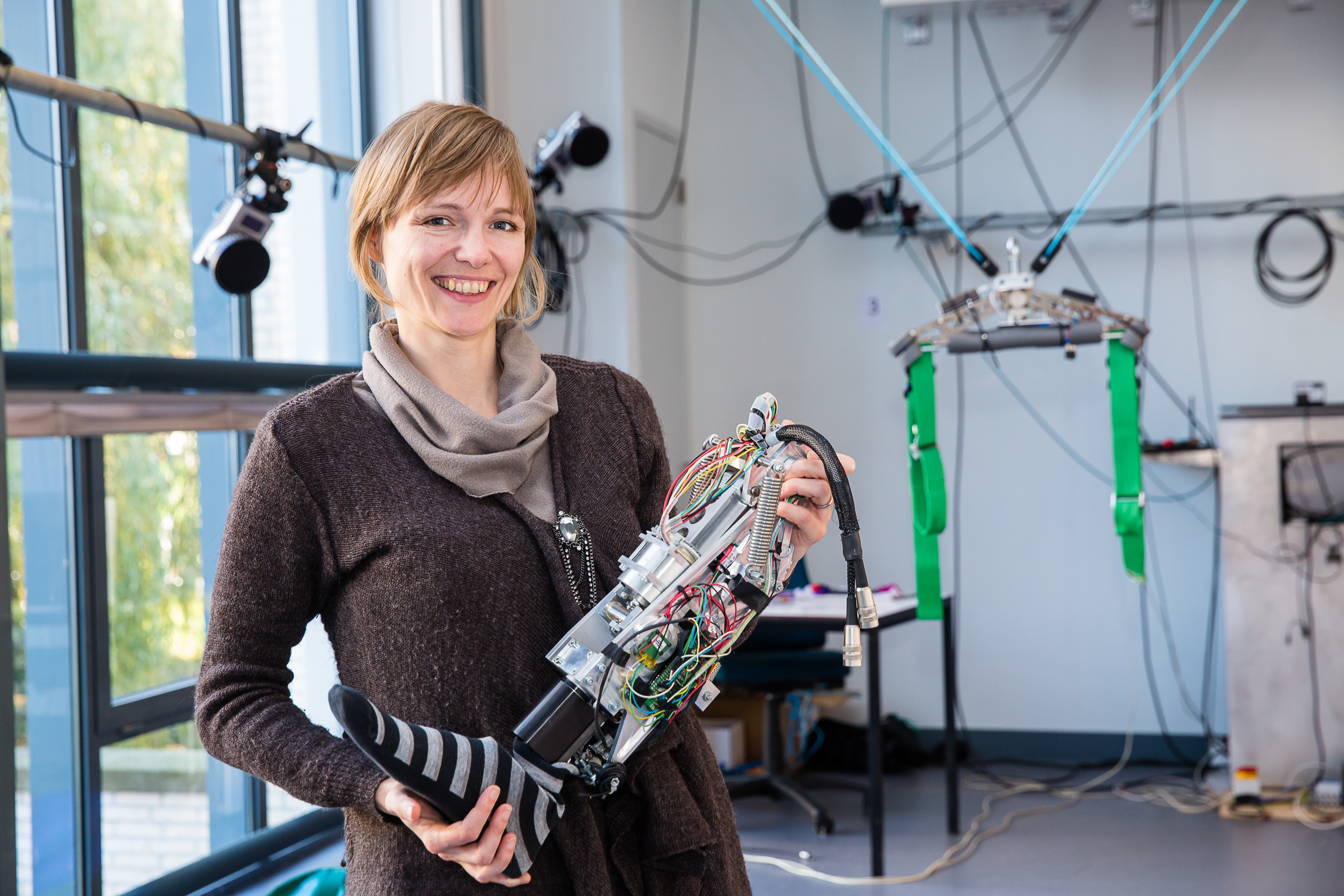 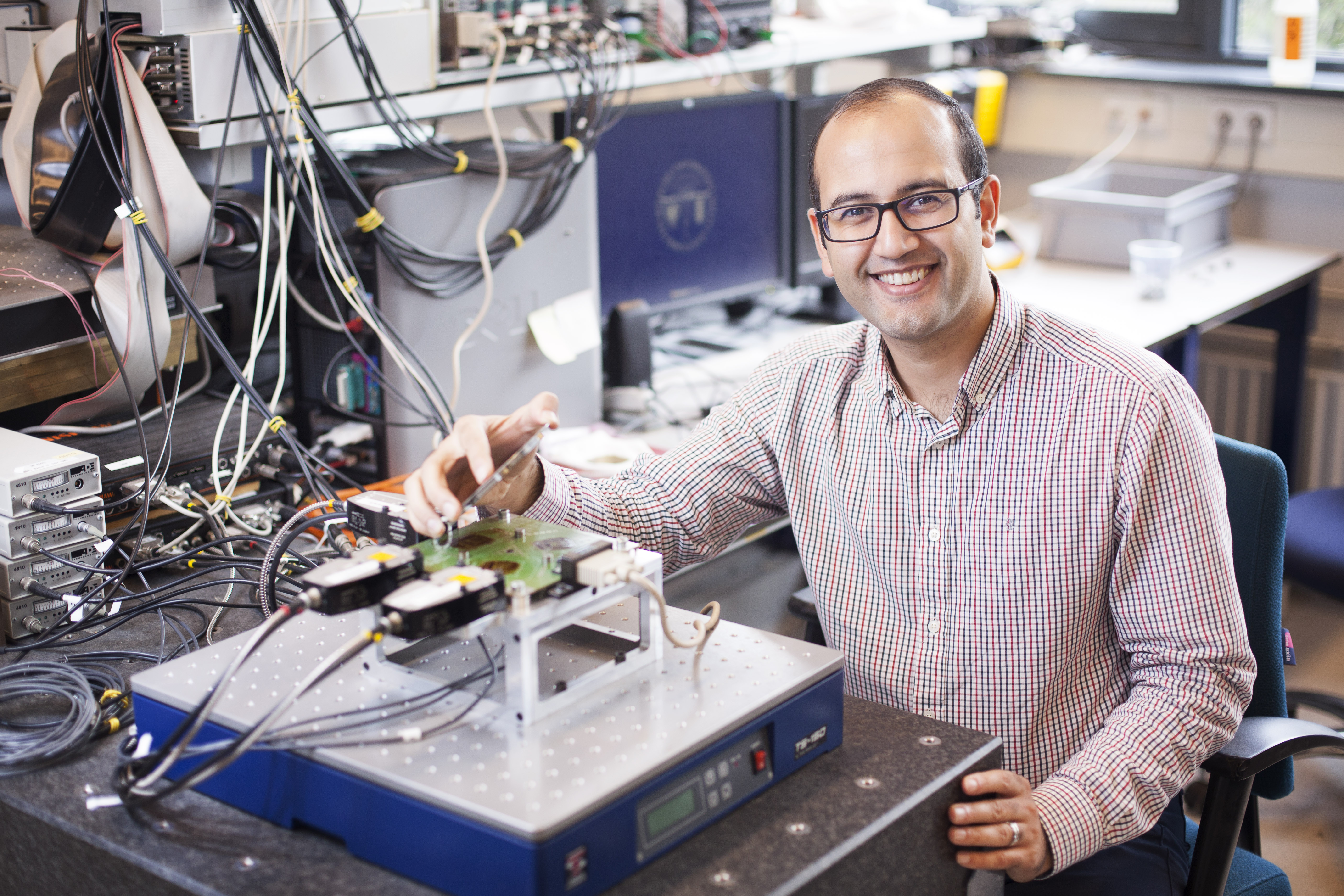 Originated from the cohesion project, SpringScan BV develops smart springs to tailor mattresses to the individual customers. And that’s just the start.

Idea for an artificial muscle

A step back in time. Van de Kamp, originally a human movement scientist, interested in translating human capacities to robotics, learns about a design for an artificial muscle: a set of wires made from soft polymers that can be made to shrink or expand. By combining multiple such structures, a fluid movement could be made, just as happens in human muscles. Van de Kamp immediately recognises the design’s potential for a futuristic type of robot, constructed from soft, flexible elements that can simultaneously ‘sense’ and ‘act’.

Dreaming of a new type of robotics

He explains: ‘A robot needs both sensors and actuators. Ideally, they are integrated in such a way and with such materials that the robots resemble humans to some extent.’ Van de Kamp dreams of a new type of robotics. ‘The current generation of industrial robots is built up from metal components controlled by motors. Humans better keep a safe distance. If we want humans and robots to start collaborating, we need to consider more elastic materials and other ways to drive them: compliant robotics. ‘I am convinced that this is necessary to create a future in which man and machine closely work together’.

Intrigued by the possibility of creating an artificial muscle, Van de Kamp brought colleagues on board with complementary expertise: Vallery in the area of biomechanics and HosseinNia in the area of the control engineering needed to successfully bring together the input and output of all these smart elements. ‘As we were planning to combine many elements into a single system, the idea quickly emerged to miniaturise those elements. And building on the concept of miniaturisation we also wanted to develop micro-robotics, again based on the example provided by nature. For example, various micro-organisms and sperm cells propel themselves using a tail; that was one more thing we could mimic using our artificial muscles.’ But ... things went another way.

The idea quickly emerged to develop micro-robotics, based on the example provided by nature.

Van de Kamp brought electronics expert Dr. Michael Fritschi (Delft Centre for Systems and Control) to the project and this led to a breakthrough: Fritschi discovered how a helix-shaped structure of ferromagnetic wire material can be ‘read out’. ‘Although the wire cannot make an autonomous movement, it can sense changes in shape without the need for a separate sensor. In this way we realised half of our envisioned muscle element.’ And although it turned out the principle wasn’t applicable on the micro level, on the macro level it was such a robust and promising find that the researchers applied for a patent and the project quickly started to take up all of their time.

It was such a robust and promising find that we applied for a patent and the project quickly started to take up all of our time.

But what’s the point of a smart spring? Van de Kamp: ‘The most common helical structures are springs. These can be found anywhere, so no shortage of applications areas. I looked for a technologically simple application to start off with.’ Completely by accident, he made the connection to mattresses. ‘I had just bought a mattress and wasn’t fully satisfied. It was supposed to be tailored to my body but it didn’t look like that was the case.’ This personalisation really should be better, he thought. ‘That’s when I realised: we can do that!’ Until then, mattresses were tailored by measuring the owner’s body and determining the BMI. On the basis of those data, parts of the mattress were for example made stiffer. A mattress fitted with the smart springs of Fritchi and Van de Kamp could provide all the data needed to precisely determine which areas should be stiffer and which should not. Van de Kamp took the plunge and contacted a mattress manufacturer, who immediately responded with enthusiasm. ‘It was something they had been pondering, too. Within a few months we developed a full test mattress, which is already being used in a shopping environment. The concept was demonstrated at the largest European furniture exhibition and attracted a lot of attention.’

I looked for a technologically simple application to start off with. Completely by accident, I made the connection to mattresses.

SpringScan’s success made Van de Kamp’s career take a turn. ‘I’ve been doing research for some 15 years. The crazy thing is: ever since I decided to focus completely on our company, I haven’t looked back for a second. It’s so much fun.’ He continues: ‘Careers can’t be planned ahead, they unfold. Research sometimes leads to scientific results, sometimes to excellent education and sometimes to breakthroughs with commercial potential.’

Remarkably, the smart springs currently incorporated by SpringScan in mattresses aren’t much different from the very first prototype of so many years ago. ‘From a scientific point of view, there are still many parameters that can be optimised, but we just haven’t got around to that. We invested a lot of time into the software and interface.’ This could change in the future. ‘Perhaps, in a few years, we could transfer our work on mattresses to an autonomous division, allowing us to focus on new application areas. For example, the suspension springs used in lorries could be made smart and thus produce useful data. In the longer term we could perhaps do something in the area of e-health.’

In the longer term we could perhaps do something in the area of e-health.

The foundations for the patent and the company were laid during the cohesion project. ‘When we started, there already was collaboration among multiple disciplines to realise innovations in the robotics domain. This involved for example biomechanical engineers, material scientists and control engineers. Although my project went another way, research into artificial muscles continues at TU Delft and so does the tradition of multidisciplinary collaboration.’ SpringScan also owes a lot to the Department of Precision & Microsystems Engineering, in the person of Prof. Just Herder. He supported the budding entrepreneurs in applying for a Take-Off grant from the Netherland Organisation for Scientific Research (NWO). Van de Kamp: ‘Through my zero-hour contract at TU Delft I’m staying connected to the university.’

Through my zero-hour contract at TU Delft I’m staying connected to the university.

What’s the secret of SpringScan’s success? Van de Kamp carefully weighs his words. ‘Success can’t simply be planned in the lab. You need to get your feet into the clay.’ But apart from that, the factor luck plays a role as well, he explains. ‘This is not often acknowledged. It has always been my intention, if SpringScan really becomes a success, that I will not conceal the fact that part of it has been luck.’ Luck or no luck, ever since his cohesion project, Van de Kamp has been swept up by a whirlwind. Although the website of SpringScan is still nothing more than a logo, things are developing quickly. ‘Check back in a year or so’, Van de Kamp says, ‘and you’ll see how much has changed.

Success can’t simply be planned in the lab. You need to get your feet into the clay. Apart from that, the factor luck plays a role as well.

Dr. Cornelis van de Kamp (SpringScan BV; Delft Centre for Systems and Control) studied Human Movement at the University of Groningen. He did his PhD research in modelling the visual guidance of goal-directed movements at the Faculty of Medical Sciences (University of Groningen), graduating in 2011. After that, he worked as postdoctoral researcher at Manchester Metropolitan University (UK). In 2013 he was granted a Marie Curie Fellowship which brought him to TU Delft. His expertise is in motor control of man and machine, neuropsychology, cognitive psychology and physiology. At SpringScan he now focuses on the strategic and commercial development of the company.

3mE Cohesion projects
The cohesion projects were launched in 2014 based on an idea by Dean Theun Baller, the aim of which is to encourage interdisciplinary cooperation within the faculty. A good engineer, after all, is inherently good at working with others, and most innovations take place on the cutting edge of disciplines. The cohesion projects give young researchers the opportunity to ask for funding for projects, on the condition that they work together with colleagues within the faculty and outside their own discipline. Mechanical Engineering, Maritime Technology and Materials Science have proven to be extremely suitable for unexpected cross-overs with surprising outcomes.