Computations of the river bed

Dr ir. Astrid Blom studies changes to the river bed caused by the interaction between the flow and sand-gravel mixtures on the river bed. She does so as part of the STW projects WATER2015 “River Bed degradation” and RiverCare.

European rivers such as the Rhine, Elbe and Danube are slowly degrading, not so much due to subsidence, but primarily due to erosion: the flow transports more sediment downstream than is supplied by the river from upstream. In the Dutch part of the Rhine this erosion amounts to about 2 cm per year. “There can be all sorts of causes,” explains Dr Astrid Blom. “Human causes such as the construction of dams and dikes or dredging activities, however there may also be natural causes.” River bed degradation is the subject of her project that is part of the STW funding programme WATER2015; Blom’s proposal was first out of the 26 projects granted.

Two PhD candidates will soon start working on this project. One of them will examine possible causes of the river bed degradation. “The origin of the ongoing degradation is probably a combination of things, but which has relatively the largest effects?”, wonders Blom. The other PhD candidate will work on possible solutions to the ongoing degradational problems. This is because a decreasing river bed elevation is a problem, even if it doesn’t seem so at first. “A decreasing river bed elevation leads to a decreasing water surface elevation, so your dikes become relatively higher. That seems to be favourable, but some parts of the river bed do not erode or not as easily as other parts. This then creates a sill for navigation.” This creates shallow areas in the river, and the shallowest one (the one that determines how much freight can be transported by vessels) is no longer located in Germany but in the Netherlands.

Transportation of less freight is not cost-effective, but that’s not the only problem. “The stability of structures such as groynes is also threatened. Moreover, river bed degradation affects the groundwater level,” explains Blom. Germany has dealt with these issues for a longer period. “The section of the Rhine upstream from Iffezheim is fixed due to the construction of a large number of dams. Downstream from Iffezheim the lack of sediment induced by the dams causes river bed degradation.” In Germany they have undertaken measures that the Dutch usually associate with beaches: sediment nourishment or augmentation. “The Dutch are now about to start with the same measures in their main river.”

Between April and October 2016, Rijkswaterstaat (the Dutch Directorate General for Public Works and Water Management) will have a huge quantity of sand and gravel dumped into the Rhine at Lobith. “The objective being to ascertain whether such measures can limit or halt the ongoing river bed degradation. Sediment augmentation is a reasonably ‘green’ solution that is also flexible and cost-effective.” Analogous to the Sand Engine off the coast of the Province of Zuid-Holland, the river’s natural behaviour will lead to a downstream distribution of the sand and gravel. The current field pilot at Lobith is intended to provide increased insight on how that works exactly. “How often do you have to conduct sediment augmentation, where, and what sediment volume is needed? And what is the best grain size distribution of the added sediment? Overly coarse sediment will not be distributed downstream, yet too fine a mixture won’t help limit river bed degradation either, as it will end up in the ports of Rotterdam causing problems there.”

Blom and her students will use the results of this large-scale field pilot to improve existing computational models. “A field pilot governed by (a) a known initial situation, (b) knowledge of what sediment will be supplied to the river, and (c) very detailed measurements provides a unique opportunity. We conduct all types of experiments in our lab, but at a much smaller scale.” Insights from both field and lab experiments is crucial. “In field studies a lot of complicating factors play a role, which makes it hard to distinguish between cause and effect. In the lab we can quite easily focus on a specific phenomenon and measure its effects.” All these measured data feed our models, which will eventually be good enough to predict future sediment augmentations.

This is completely in line with Blom’s interests. “My research focuses on changes in river bed elevation and, in particular, sand-gravel mixtures.” Blom studied Civil Engineering at Delft University of Technology and did her MSc thesis work in collaboration with the former WL Delft Hydraulics (now part of Deltares). At Twente University she received her PhD cum laude for her work on the interaction between the flow and sand-gravel mixtures in rivers, a subject she has since specialised in. While during earlier years she primarily studied the more detailed processes of sediment sorting, she now focusses on sediment sorting mechanisms at a larger scale. “Some of the smaller-scale effects are included in our large-scale models, as sometimes you need to account for them to understand the mechanisms that act on a large scale. Do we, for instance, need to include turbulent eddies in a parameterised manner or should we describe them in detail, and, if so, how?”

Another thing that has changed over the years is the time she has left for doing research. “The more you grow, the more time you spend being an advisor and a coach, yet I gain a great deal of satisfaction from my own research. This has become a constant search for a good balance. After a couple of days chock-a-block with administrative activities I definitely need to recharge my batteries by working on my own research.” Blom is surprised that so little time remains for the primary tasks of a university, research and education. “You need a significant time slot for doing research, not half an hour here and there. Fortunately our department head Wim Uijttewaal offers me the possibilities to do so.”

Naturally Blom also enjoys supervising PhD candidates such as the two working on the RiverCare programme. RiverCare is a Perspective Programme within which universities, companies and institutes such as Rijkswaterstaat, Deltares and Stichting Toegepast Waterbeheer (STOWA) collaborate. “The RiverCare programme consists of around 20 PhD positions, three of which at Delft University of Technology. I am the daily advisor in two of those projects.” RiverCare is, among other things, aligned with 'Ruimte voor de Rivier' (Room for the River) that has decreased the risk of river flooding by primarily applying measures that give the rivers more room. “These measures are now being monitored extensively. Which lessons can we learn to sustainably maintain our rivers?”

The two RiverCare PhD candidates of Blom mainly focus on an improved prediction of river bed changes. One of the issues is that current river models cannot predict what will happen in 200 or 300 years from now. “We are, as yet, unable to make a 2D model compute over a period of 200 years; the duration of a computational run is now 40 years. The reason for this is very practical; the computation would simply take too long otherwise.” This does however lead to problems in computing, for example, the effects of augmentation measures, as the sediment is distributed downstream very slowly. “If we would only conduct short computations, we may overlook certain future effects of sediment augmentations and other measures, and then we will not be able to optimally design such measures. You simply need to know how the system will respond to a measure on the long term in order to properly design the measure. If the current ongoing bed degradation were to stop on the longer term, we may not even have to conduct sediment augmentations.” Such long-term predictions is the research topic of PhD candidate Liselot Arkesteijn.
Another issue is that current models are still fundamentally incorrect under certain conditions. “Under these conditions we simply cannot make predictions as the model equations are fundamentally wrong,” explains Blom. “In such a case we simulate the conditions in the lab to understand what physically happens in the flume when the model cannot describe it. We then use the flume data to improve the model.” This is the topic of the research by PhD candidate Victor Chavarrias. “We have to take a step back to examine the fundamental part of the model.”
“In the WATER2015 project we will continue to work on river bed degradation issues.” The WATER2015 and RiverCare projects are closely linked to one another. This is no coincidence. “I set up and take on projects that contribute to my main research focus. I have a clear idea of where I am heading: the development of appropriate models for predicting (long-term) river bed changes”. 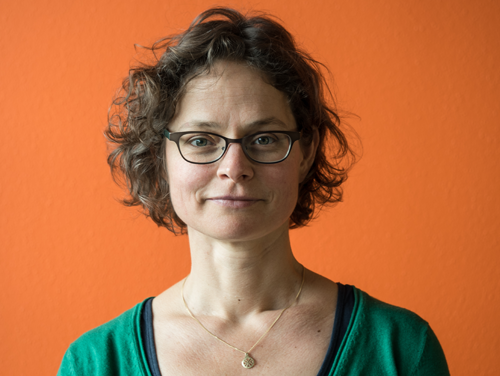