Ridding the oceans of plastic waste is a huge undertaking which would be significantly helped if the location of the plastic waste could be ascertained with some accuracy. Wave expert Ton van den Bremer is using waves and satellites to track down the ‘phantom’ plastic that is polluting our oceans.

Every year rivers shed their cargo of millions of tonnes of plastic waste into the open sea. And then quite a lot of it disappears. ‘The amount of plastic debris we detect in estuaries and along the coastline is probably much larger than what we find at sea,’ associate professor of Environmental Fluid Mechanics Ton van den Bremer says. According to Van den Bremer a large amount of plastic somehow goes missing, the difference running into millions of tonnes. ‘We don’t really have an explanation for this. Perhaps the plastic breaks down via natural processes or sinks to the bottom. It may be that the ways waste volume is measured, by means of dragnets, for example, are not accurate enough. The most likely reason is that the debris accumulates in coastal areas and deltas.

The detection of missing plastic debris is the subject of several ongoing research projects, Van den Bremer says. ‘My own particular focus is on gaining a better understanding of the role waves play in the transport of plastic waste. Waves are a complex mix of wind and water. To understand a wave, you need to have an insight in the processes that determine both elements. Many of these are largely a matter of physics but put all the processes together and you end up with something that is much more difficult to interpret. Our lack of a comprehensive understanding of the fundamental wave processes means modelling the transportation of waste streams in the oceans is a challenge. Proper models would be very helpful in tracking down and removing plastic debris from the sea and coastlines.’

We have to understand the complexity of the interaction between the waves, wind and plastic debris.

One of the questions Van den Bremer is trying to find an answer to is why the debris accumulates in some parts of the ocean while in others it makes its way to the shore. ‘To find out why this happens we need to understand how waves and plastic interact. What we do know is that the presence of plastic debris affects the motion of the so-called capillary waves*. Changes to these waves can be a sign there’s debris there. What we need to find out is how big the effect of the plastic on the waves really is.’

A good way to detect waves is from space. Van den Bremer is therefore examining whether satellites can have a role in pinpointing the location of the plastic. ‘Satellite images show lines of a kind in some parts of the ocean which we think could be aggregations of plastic debris. But we don’t have concrete proof which is why we have mounted a large-scale experiment in which Deltares, the European Space Agency and other partners are taking part. The aim of the experiment is to find out if these aggregations of debris can be seen from space. And if that is the case, how much debris has to be present in order to be spotted.’

At Deltares, a large water filled basin, the Atlantic Basin, stands in for the ocean. ‘We have thrown in plastics of every type and density, from small balls and plastic straws to small bottles and tube insulation; the type of waste that commonly ends up in the ocean. We then turned on the wave maker and used radar equipment to see if the objects were causing changes to wave motion. In the real world satellites also use radar signals but from a hugely bigger distance.’

The aim of the experiment is to find out if these aggregations of debris can be seen from space.

One of the findings of the experiment is that, in principle, aggregations of a certain volume can be seen from space, Van den Bremer says. ‘But we don’t yet know the exact threshold value, or what it is determined by. A very interesting discovery which will help detection is the importance of the behaviour of capillary waves. Capillary waves are very small waves dominated by surface tension. They can form as a result of the presence of, for instance, floating debris. The tiny ripples on the water surface reflect radar signals. More capillary waves mean more reflection and that in turn can indicate the presence of an aggregation of plastic waste.’

In order to measure the exact effect of capillary waves researchers will be developing a new experiment. Van den Bremer: ‘Because of its length and depth the Deltares basin is particularly suited to simulating gravitational waves, the big ocean waves we are all familiar with. Initially we thought these waves could perhaps be instrumental in finding the plastic. We supposed that a large concentration of plastic might dampen these waves, but that effect did not materialise. We are now developing a smaller testing facility which will enable us to create capillary waves in a controlled environment.’ 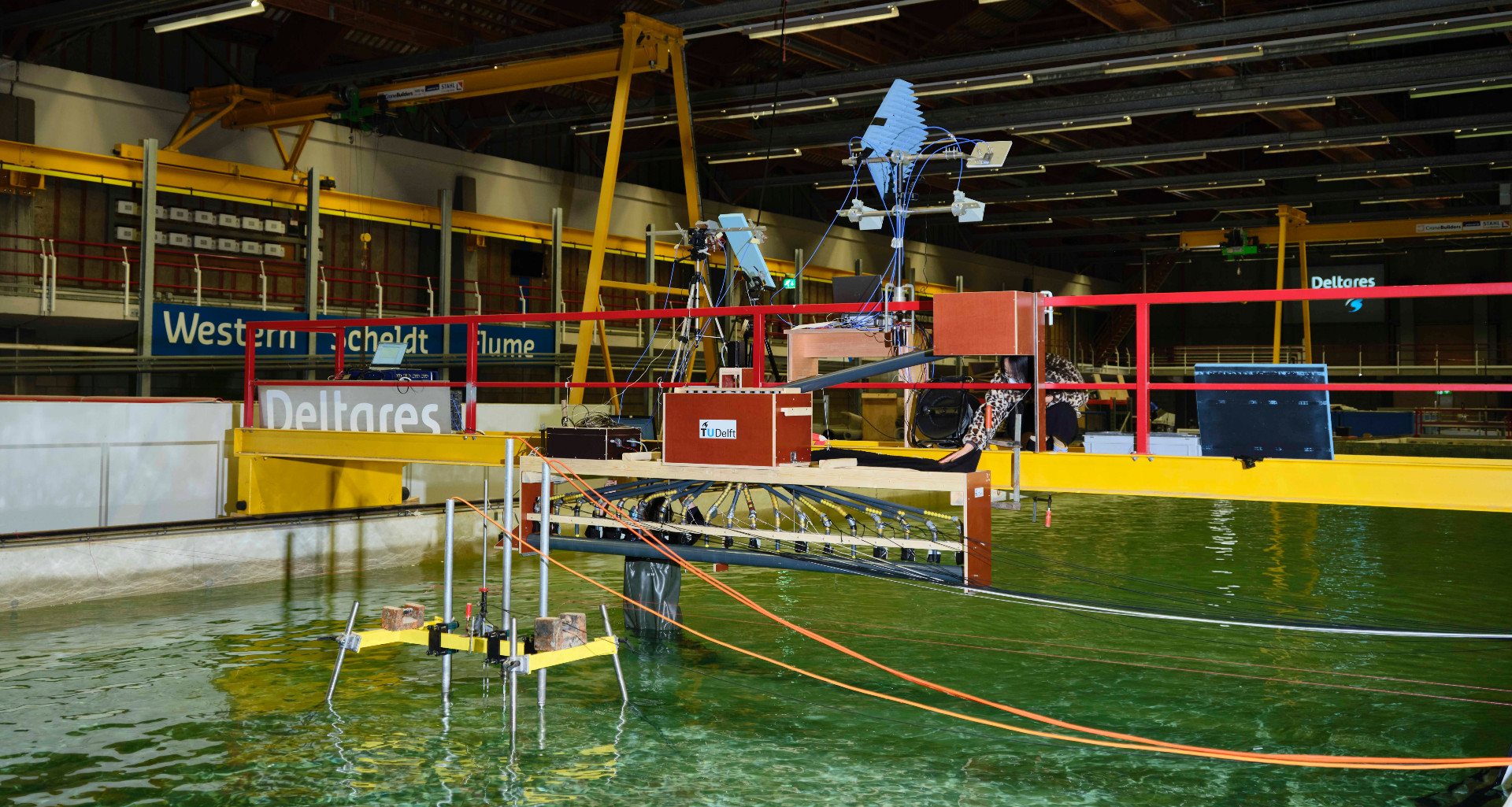 Follow up research will include a closer look at the effects of biofilm on capillary waves. ‘Plastic waste which has been in the ocean for a long time will acquire a layer of biofilm. That may possibly have a damping effect on the capillary waves. It’s an effect which has been seen with oil slicks and satellite images are already being used to detect oil spills. We have invited a number of biologists to participate in the experiment and to help us create biofilm on plastic. It is this coming together of a lot of different fields of expertise which makes this research so special and so much fun. And hopefully it will bring us one step closer to solving the plastic problem.’

Capillary waves are very small waves, or ripples, in the water surface. Their wavelength typically varies from a couple of millimetres to a few centimetres. Capillary waves are a result of surface tension, the force that counteracts the divergence of water molecules.