An affordable wave buoy that's easy to transport and shows everything it measures right away via an app. That's what Max Radermacher dreamt of when he was using bulky heavy instruments to collect data about wave currents for his PhD research at TU Delft. Since then, he and his partner have developed the WaveDroid – a wave buoy that meets all his personal requirements. And now it's time to demonstrate its potential to the world.

‘Okay, let's just load it up then we can set off to sea!’ It's 10 in the morning, the skies are clear and Max is carrying his bright yellow WaveDroid along the jetties at Scheveningen harbour. Today he's launching the buoy just off the coast near The Hague to show the many interested companies just what the device is capable of. Hidden in the belly of the yellow cylinder is a highly advanced computer – an Android smartphone! Normally, the phone's accelerometer and gyroscope help to rotate your screen at just the right time, or to navigate. But as it turns out, they are also highly suitable for collecting wave data.

The WaveDroid buoy measures the height, direction and period of waves. Just like conventional wave buoys in fact, but Max's alternative is ten times cheaper to buy or hire.  It can also process the data immediately in the smartphone and send it via a 3G connection, giving the client continuous real-time information on what the buoy is measuring. That can be useful if you want to check if it's a good day for dredging, surfing or sailing.

Back to the harbour. The boat waiting for Max is smaller than expected, but that's no problem: the big advantage of the WaveDroid is that you don't need a large ship or crew to put buoys out to sea or bring them back. This makes it a cheap alternative to conventional wave buoys. Max checks carefully that the associated anchor, two smaller buoys and the chains are properly attached. Then it's simply a question of throwing it all overboard at the desired location.

We sail on the rather choppy sea and reduce our speed at around … metres from the beach. Turning around we can see the Kurhaus and the giant wheel in the distance in Scheveningen.  Slightly to the right, is the start of the Sand Engine (Zandmotor) – the artificial peninsula made of sand, gradually being spread along the coast and the dunes by the waves. Max is familiar with the area, having spent three years researching safety for swimmers here. Because although the Sand Engine is a great way of using nature to expand the dunes and the beach, this kind of intervention could also have an impact on the current. Does it strengthen the current or change it for example? And is it still safe for beachgoers to take a swim in this area?

The WaveDroid has actually come too late for Max's research – he's already collected, analysed and published his data. But there are plenty of businesses and organisations interested in his invention. For example, Boskalis recently completed the first commercial pilot using WaveDroids to determine whether it was safe for ships to remain in place while work was being carried out. Port authorities have also shown an interest, as have the rescue services, sailors that train at sea and, of course, TU Delft, which conducts a lot of research along this part of the coast. There is even a great deal of interest from outside the Netherlands. In Durban in South Africa, where Max's business partner Zane Thackeray lives, the city is using the buoys to examine coastal erosion. They are also being deployed for the same purpose in Myanmar. Max and Zane deliberately aimed at an international market: by pricing the buoy low, they can attract interest from other parties and increase their market share. The design of the buoy also took account of what equipment is available in second or third world countries. That's why the smartphone is charged using batteries that can be bought cheaply from a supermarket in any country. This provides enough power for around three months, so you don't need to pay frequent visits to the buoy.

In the future, Zane and Max intend to use this same buoy for different types of measurements, such as water quality, temperature, air pressure and precipitation. For this they are partly dependent on the development of sensors and smartphone technology. The 3G connection that the buoy currently still needs means the WaveDroid can't be used too far offshore. But as soon as that issue is solved, offshore companies will also be able to use the buoy for their work and for monitoring.

But right now we just need to get this buoy into position. The waves are high, breaking over the edge of the boat. Max is soaked to the skin, but he casts the buoy into the water in a single, smooth movement. Now it's a case of throwing in the anchor and the job's done. Mission accomplished.

Soaking wet, but satisfied, we eventually drive back to TU Delft. Max still has some work to do on his PhD today, while also keeping a close eye on the data, of course. In the meantime, the WaveDroid has sent back its first readings. Today's waves were around 0.5 metres high. 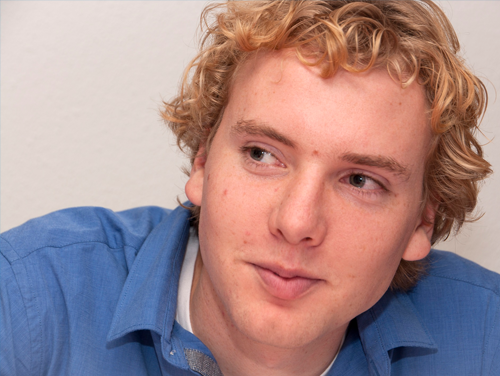