Aircraft noise around airports is a major problem, and a persistent one. Researcher Martijn Lugten asked himself whether the way we build houses might hold the key to solving this problem. This resulted in a test set-up in Hoofddorp with 120 containers simulating a residential neighbourhood and in which, in addition to noise, the urban microclimate is also being studied.

First investigation of this kind

‘This is a first instance of us imitating and adapting buildings to see how exactly that would influence aircraft noise,’ says Martijn Lugten, researcher at the TU Delft Faculty of Architecture and the Built Environment and Amsterdam Institute for Advanced Metropolitan Solutions (AMS Institute). ‘The project is an extension of the investigations we have been doing in the last five years. Among other things, we have done measurements in the vicinity of existing buildings and worked with calculation models. The study installation named ‘urban comfort lab for sensing sound and heat stress’ in Hoofddorp actually is the next step, since our work with the calculation models showed us how certain things could help us build better. However, calculation models always have their limitations, so we are now trying to do concrete tests with this test set-up.’ The set-up uses 120 containers to simulate a residential neighbourhood. ‘This has never been done in this manner,’ Lugten explains. He will be working in the lab the half of every week. 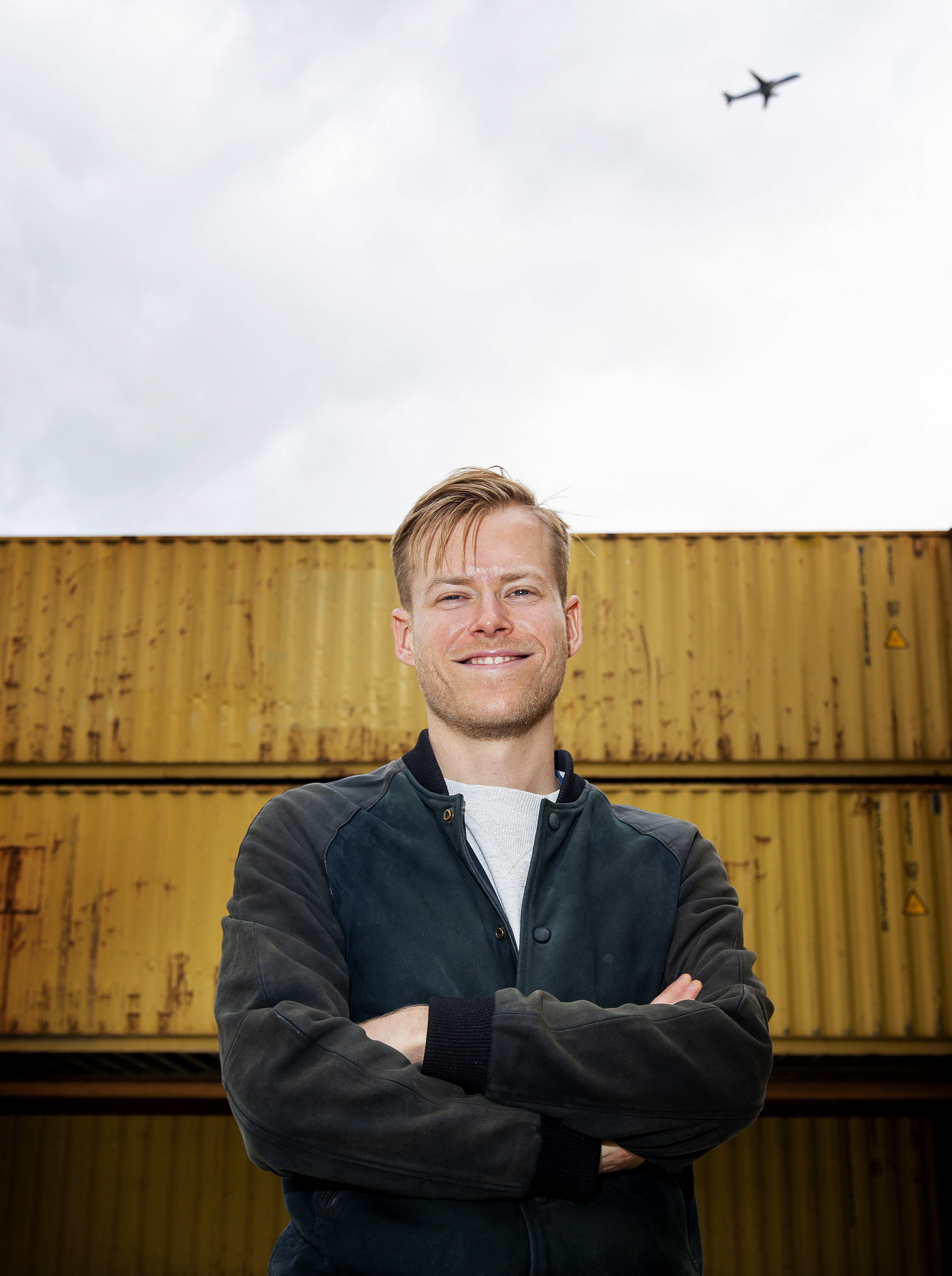 ‘Our previous calculation models showed that aircraft noise can be limited by careful positioning of buildings,’ Lugten continues. ‘The sound level depends on your exact position vis-à-vis the buildings. Of course, reflection between buildings also plays a role. You can influence this reflection through the building design and, moreover, through the materials you use in these buildings.’

‘When designing buildings you must avoid straight façades; you must go for angled planes or ensure that buildings lean over more. Staggering façades ensures that noise is dispersed more, and that the sound is not trapped between the façades but reflected upwards.’

‘Besides this, you can use materials on the façades to partially absorb the sound. Porous materials are a good example of this; sound energy is converted to heat energy in the pores. We are also looking at improving these porous materials, for example by introducing air columns (resonators) into them that allow more tones, predominantly the low tones, to be absorbed. Noise absorbent materials have been in use for longer, but mainly on the inside of buildings and not on the outside, the way we are doing it now.’

Why has this approach not been considered before, as it is relatively logical after all? ‘That is a very good question,’ says Lugten. ‘In part it is due to the way we have been dealing with sound since the nineteen seventies. The traditional approach was: we draw the perimeter of a very large area around Schiphol, or whichever airport is involved, and do not allow construction within the perimeter, only outside it. For a long time, this was how we dealt with this problem from a legal point of view, and that is why almost everyone still thinks along these lines. The built-up environment is not a factor in the models that are used to determine the noise contours.’ 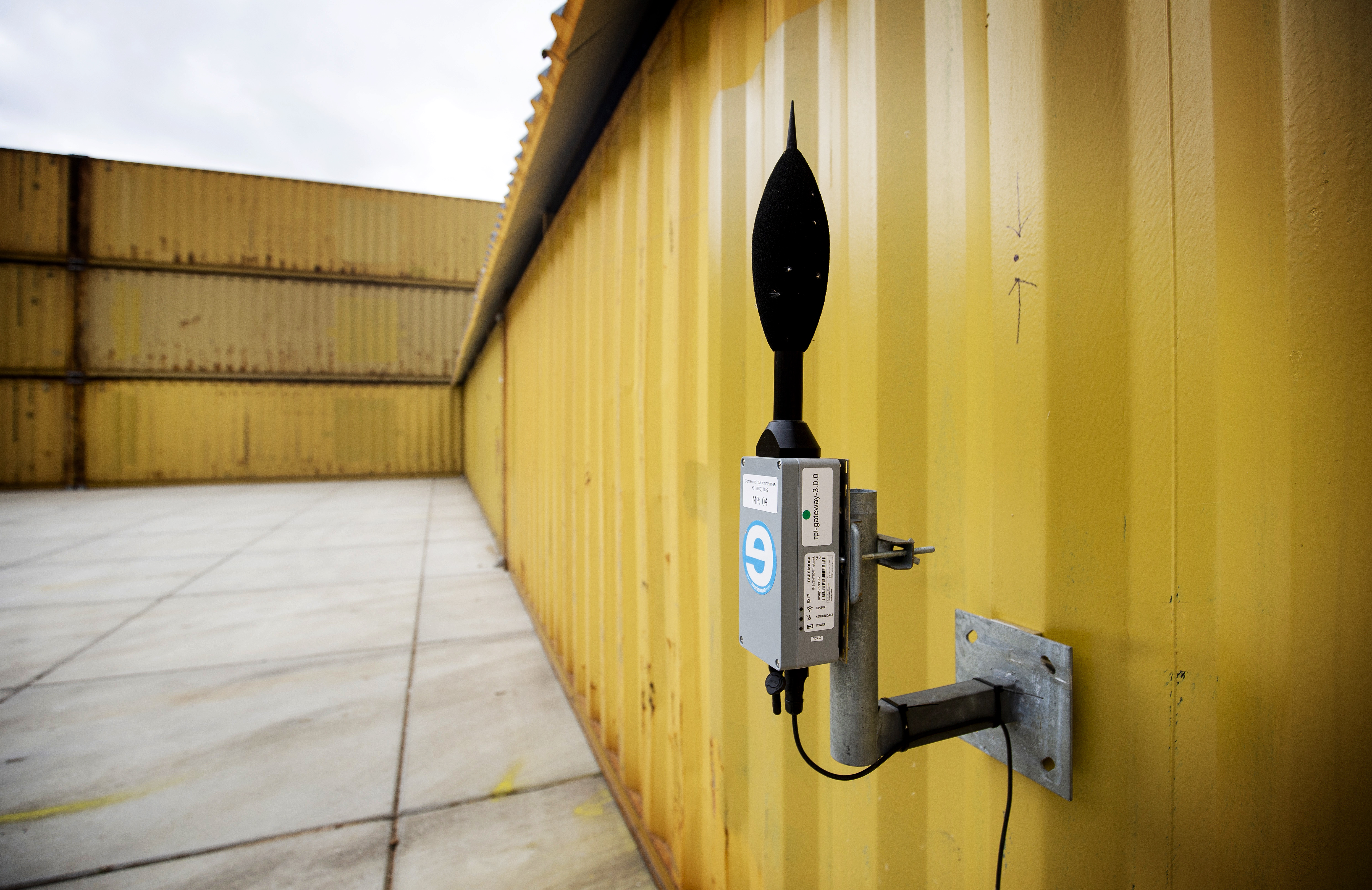 Fascinated by airports and harbours

‘My arriving at this specific topic was a bit of a coincidence; I have, however, always been fascinated by large airports and harbours and found the dynamics of these kinds of places enormously interesting. In 2013, I did a Master’s programme in Civil Engineering (Construction Management and Engineering) as well as a Master’s programme at Architecture and the Built Environment (Urbanism) and I was looking for a graduation project that would involve managerial as well as technical and architectural elements. It was just at that time that ground ridges were made near Schiphol to limit low-frequency noise from aircraft taking off from the Polderbaan. That was when I starting thinking: could you not do this with buildings, instead of introducing elements into the landscape?’

‘I then approached Schiphol and the Haarlemmermeer Municipality with this idea. They found it fascinating to investigate what you could do with and around buildings in terms of noise. It transpired that very little research had yet been done into this matter, which really surprised me. It was then that things started getting underway and I did my graduation project on this subject, which later led to my doctoral research.’

‘To a certain extent, this project came about by coincidence. What did help is the fact that neither acoustics nor aerospace engineering was my field – my field is architecture. My approach to physical and technical problems is different.’

The foundation of the current Field Lab study was laid hereafter during Lugten’s doctoral research at Cambridge University, in association with Royal NLR (Netherlands Aerospace Centre). ‘While I was studying I had no plans for doing a doctorate yet,’ Lugten says. ‘I thought I would end up with a consulting firm after graduating. But the final work before graduating was such fun, and I was curious and eager to dig even deeper into the topic. So when I was faced with the choice between starting my professional career and going for a doctorate, the latter appealed to me just that little bit more. What’s more, I was keen to go abroad, to study at a highly regarded university. Cambridge it was then.’

‘At Cambridge University, social and academic life are well entwined. On Fridays, for example, we had dinners – think Harry Potter to picture the dining hall. You could end up having dinner with a mathematician to your left and a Norse mythology scholar to your right, as it were. This resulted in such inspiring discussions, which is one of the tremendous aspects of being a researcher in Cambridge. 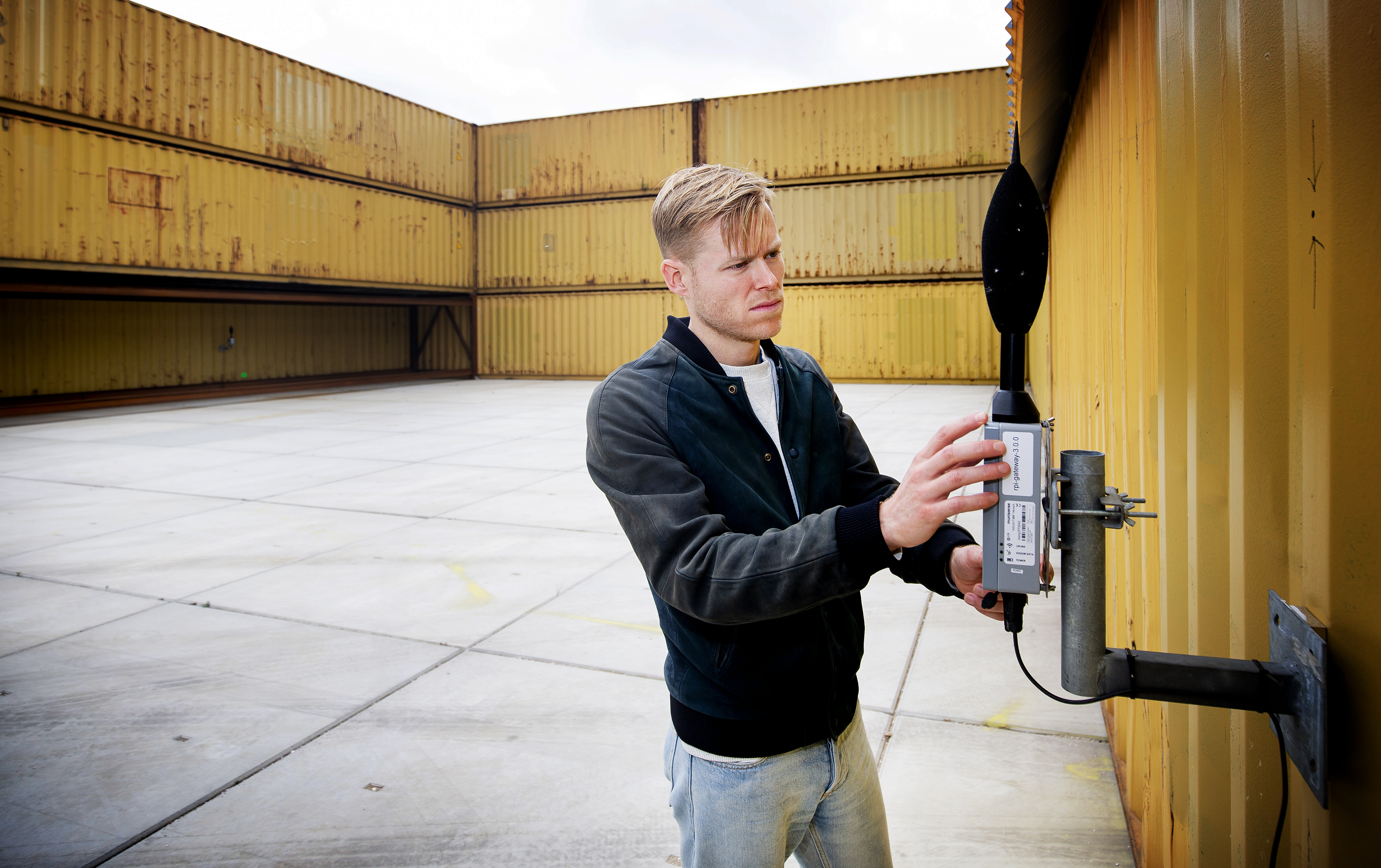 Two birds with one stone

Back from Cambridge, and through to Hoofddorp, which is where Lugten will be spending lots of time in the foreseeable future: ‘The containers have been set up and you can walk amongst them; the sensors have been placed and the first data are being harvested. In the first instance, the containers create a court-like structure with three squares. Three structures alongside each another allow us to see exactly to what extent a different façade structure reduces noise compared with a standard set-up. Naturally, we also look at the additional costs that a different building type possibly involves and relate this to the noise reduction it achieves. Based on the calculation models, we think we can achieve a substantial reduction of noise.’ ‘The Field Lab will run for two years in any case. During the first year, we will do measurements with the ordinary ‘hard’ surfaces, after which we will present the first results. During the second year, we will lay out gardens and green structures and attach porous/green structures to the façades, after which we will carry out new measurements. During this second phase, we will also investigate effects other than noise, since, in addition to noise reduction, greenery and gardens near buildings also have a positive effect on the temperature and, for example, the evaporation of moisture. This means that interventions aimed at reducing noise might also help address problems such as heat stress or flooding in urban areas. In other words: two birds with one stone...’ 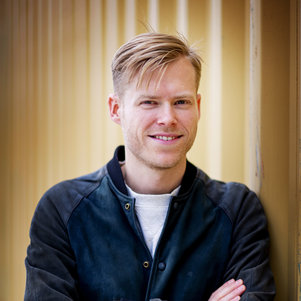 Martijn Lugten is employed by TU Delft as well as AMS Institute. Besides AMS Institute, the Ministries of the Interior and of Infrastructure and Water Management are involved, as is the Haarlemmermeer Municipality and the Foundation for the advancement of the quality of the living environment in the Schiphol region (Stichting Leefomgeving Schiphol).