Seeing tiny particles even better through a microscope – student Teun Huijben managed it for his Master’s thesis. As well as a top mark, the breakthrough has also earned him the title Best Graduate of the Faculty of Applied Sciences.

Teun Huijben’s research is about particles so small they are invisible to the naked eye. In fact, they cannot even be seen through an ordinary microscope. You need a special instrument to observe these tiny particles, such as proteins, in a cell. To study and find cures for many kinds of disease, it is important to be able to scrutinise small, individual parts of cells separately. Huijben has developed a smart algorithm which makes this possible.

Every microscope has a maximum resolution. Beyond that limit, you cannot see your sample any more clearly. But scientists use tricks to try to do just that. “For example,” Huijben explains, “an optical microscope that uses special fluorescence to make certain proteins emit light.” As a result, they flicker constantly, a bit like the indicators on a car or flashing Christmas lights. “Thanks to that illumination, you notice the proteins and can check what shape they are later. If they look abnormal, that could be a sign of disease. So you want to select for that.”

With the old method, this is not easy, since an average is calculated from a very large number of images. Such an approach is certainly smart, because it gives you a sharper image. But the averaging process also means that you overlook abnormal proteins or other deformed cell parts. You can compare it with distinguishing apples from pears, says Bernd Rieger, Huijben’s supervisor and a professor in the research department of Imaging Physics. Those fruits have quite different shapes. “But we look at particles so small that the resolution is not good enough to tell ‘apples’ and ‘pears’ apart. You need several images to be able to discern that.” If you average the images, though, you end up with a picture of something that looks like neither a pear nor an apple.

What you really want, then, is a sharper image with more detail. This is where Huijben’s new research comes in. He has created a calculation program, an algorithm, which can distinguish between the shapes of an “apple” and a “pear”. The algorithm divides images into different categories in such a way that you can now tell them apart. “This increases the resolution,” says Huijben, “so you can look at small particles with even more detail. This happens even without the program knowing exactly what it is looking for. So it doesn’t need any prior knowledge of the shape.”

This research takes science a step forward, says supervisor Rieger. “It is great that he’s found this. When Teun came to me to discuss his master project, this topic immediately appealed to him. But we didn’t know at the time whether he could achieve a result. It really was an exploratory study in which, under our supervision, he had to find his own way because it was unclear if it would work.” Huijben simply calls it “high risk, high gain” research.

According to Rieger, the toughest challenge besides the actual research work was the written reporting. “Compared with other students, he really stood out in that respect. Teun has distilled his findings into an article, which we are now submitting to scientific journals. For that you have to write in a very compact way. Which is very difficult, but he has largely done it himself.”

Huijben has also shown that he can overcome setbacks and is good at making decisions. For example, he started out developing one particular method, which was working well. “But then I had an idea for a different approach,” he declares. “And that worked even better. I had to choose the new method, but that was hard because I’d already put a lot of work into the other one.” Rieger agrees that this was not an easy choice. “When you’ve spent so much time on a certain approach, you start to see it as your baby. It takes guts to then take a different path.” That courage, his perseverance and his contribution to microscopy eventually earned Huijben an exceptionally high final mark for his Master's thesis: 9.5 out of 10.

The project has also given him a taste for research: he is now studying for his PhD in Copenhagen, Denmark. “I’m still working on computer methods to improve microscopy,” he says. “At the moment I’m investigating how to turn poor microscope images of small particles into good ones, using machine-learning algorithms. The work is somewhat similar to my graduation research. Programming appeals to me, but I like it when its application is not too abstract. As in the case of my research to produce sharper images of small particles. You end up seeing things at a level no-one has ever been able to see them before. Helping to make that possible gives me a huge kick.” 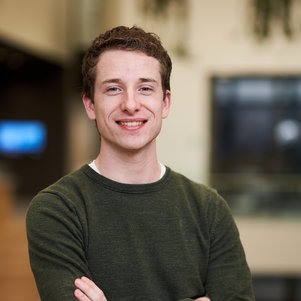