Solving a 25-year-old aviation problem? That is just what Wouter Schaberg, student in Control and Operations in the Faculty of Aerospace Engineering managed to do. He made improvements to part of an algorithm that is used to prevent aircraft coming too close to each other following an averted conflict. He scored full marks for his Master's thesis and was chosen as the Best Graduate of the faculty.

Although air traffic is currently strongly restricted due to the coronavirus pandemic, the skies have grown increasingly busy in recent years. In 2019 the average number of aircraft in flight at any one time was 11,000, twice as many as ten years ago. This volume puts a lot of extra pressure on the central air traffic control, says Wouter Schaberg, who earned his Master's degree in Control and Operations from the Faculty of Aerospace Engineering this summer. “Every flight must be reported to air traffic control, which then guides the aircraft from A to B, often on fixed routes. But the flight routes are becoming increasingly full. It is an enormous puzzle to make sure everything runs smoothly.” 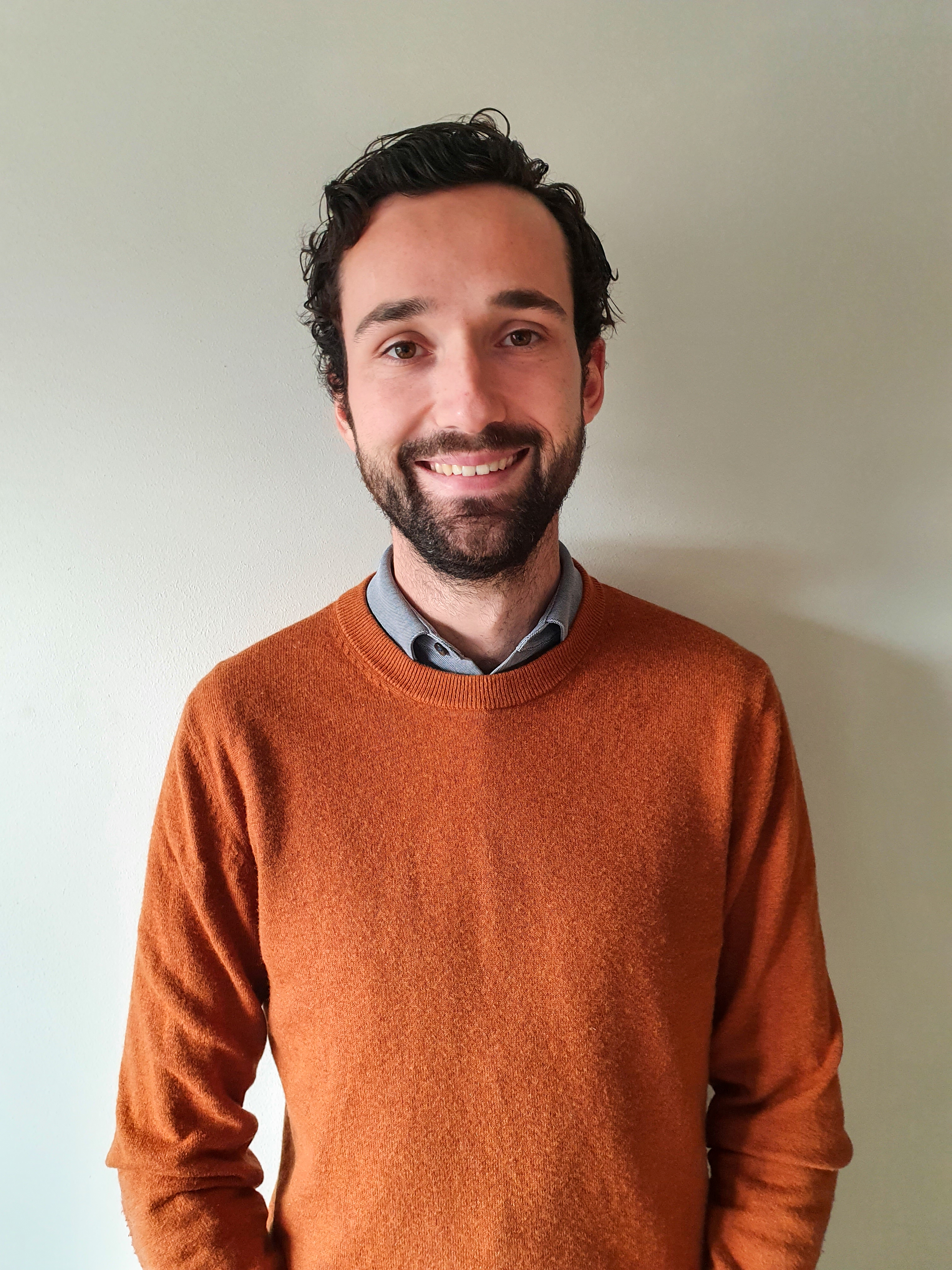 I think I must have drawn more than a thousand triangles.

A possible solution to the pressure on air traffic control is to make flight control more decentralised. Wouter: “This means that rather than being guided by air traffic control, aircraft are free to determine their own flight path and carry out manoeuvres independently. Of course this must be done safely. Back in the early 1990s an American researcher – Martin Eby – conceived an algorithm that gives aircraft a signal when they fly too close to each other and then indicates which manoeuvre the pilots need to carry out to avert danger. As commercial aviation does not yet use this free flight concept, thus far the algorithm is only used in flight simulations. In 2000, Jacco Hoekstra, my thesis supervisor, made improvements to this algorithm.”

Spending days flying around the world

The algorithm that had been developed, called Modified Voltage Potential (MVP), was not entirely watertight, says Wouter. “In flight simulations the algorithm mainly did what it was supposed to do: aircraft that were detected too close together received a signal, after which the aircraft moved apart and the danger was averted. However, aircraft flying on near parallel paths that needed to cross each other somewhere along the route continued to re-conflict after the initial conflict situation was resolved. Sometimes this meant that aircraft in a simulation got so stuck that they spent days flying around the world in parallel, with the same recurring conflict. It was my task to find out the cause of this ‘repetitive conflict’ and maybe find a solution.”

Before Wouter started on his thesis, he knew nothing about the problem with the MVP algorithm and the repetitive conflict. “My supervisor Jacco Hoekstra approached me with this issue, and it really appealed to me. Of course it's very special that he worked on this algorithm himself; that gave extra motivation to find a solution. At the same time, I knew that I was facing a considerable challenge; it was not without reason that this problem was still unresolved after 25 years. I started by reading all I could find on the subject and studied thousands of flight simulations to see the problem with my own eyes. Then I started to unravel the mathematics of the algorithm. I think I must have drawn more than a thousand triangles to see if there weren't any incorrect lines or calculations somewhere in the algorithm. But I was unable to discover any errors on the basis of this.” 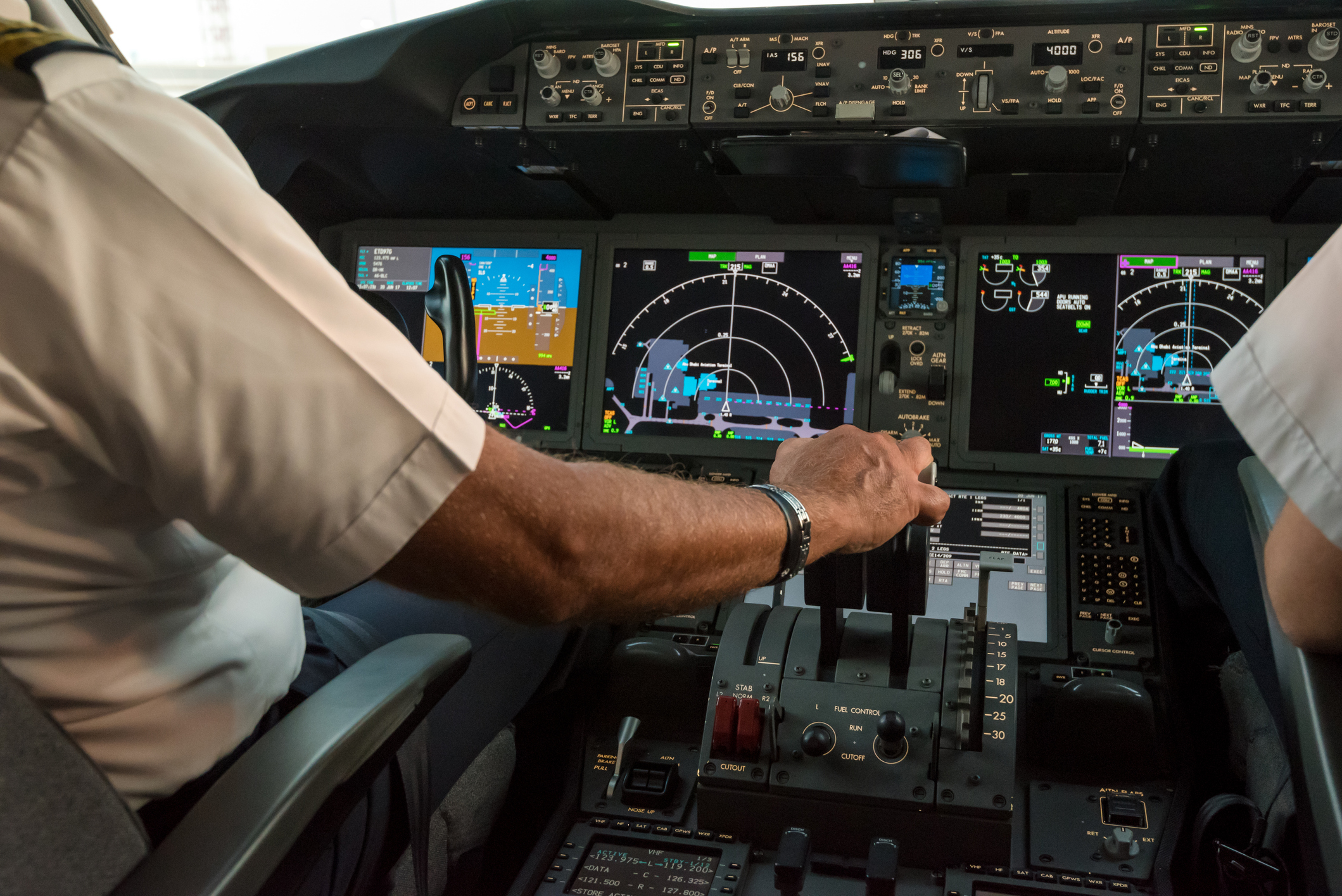 Just when Wouter was convinced he had come to a dead end, he experienced a ‘Eureka’ moment. “I went back to the literature to check whether I might have missed something. I suddenly noticed that the literature was mainly focused on conflict detection and the ways of solving this, but the phase following the conflict resolution, that of recovery, was hardly addressed at all, even though this is a problem that arises after a conflict situation has been resolved. For what should the aircraft do next? How and when can it return to its original route? I picked up the algorithm again, and then I saw where the problem was: in the mathematical elaboration of the recovery component.” 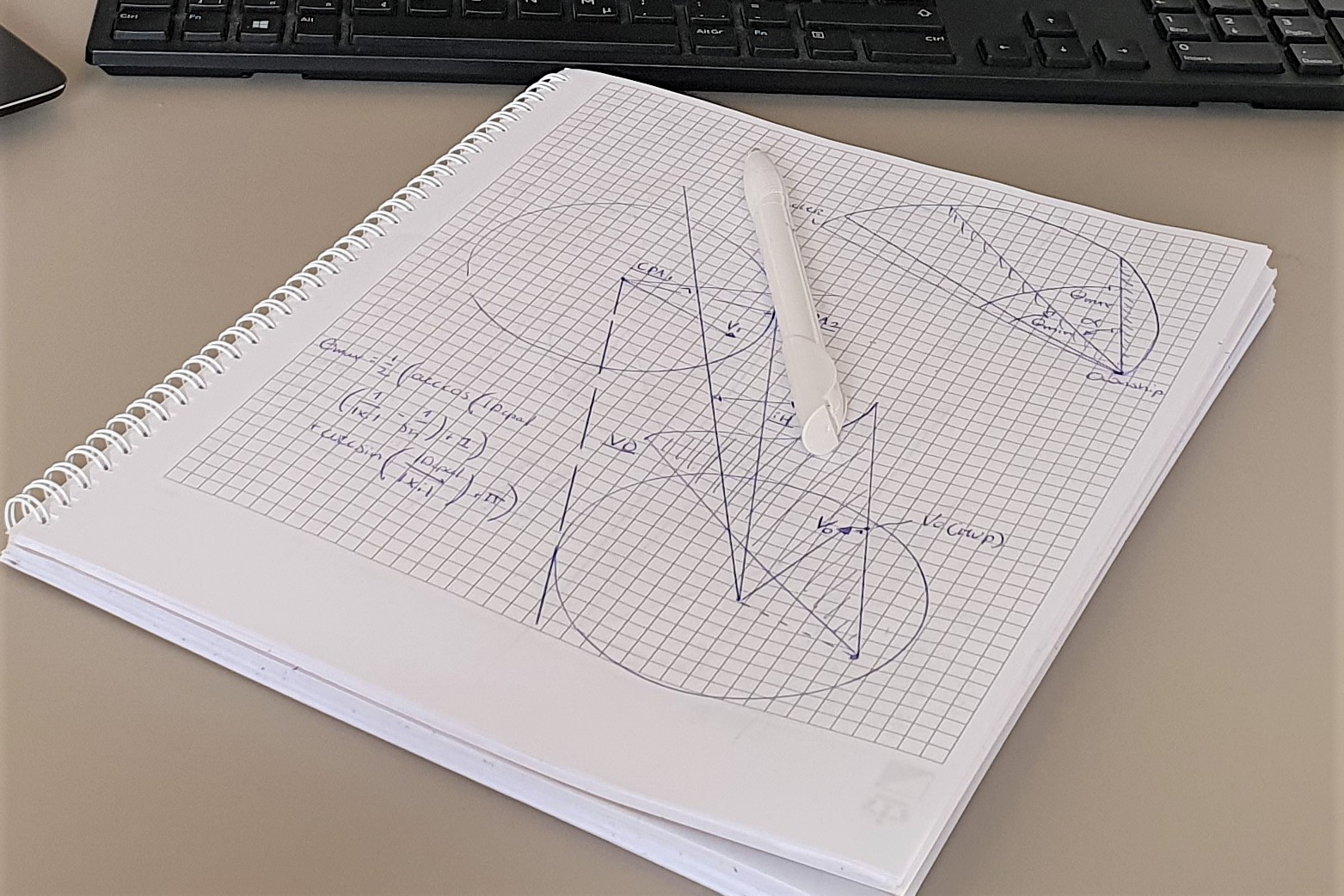 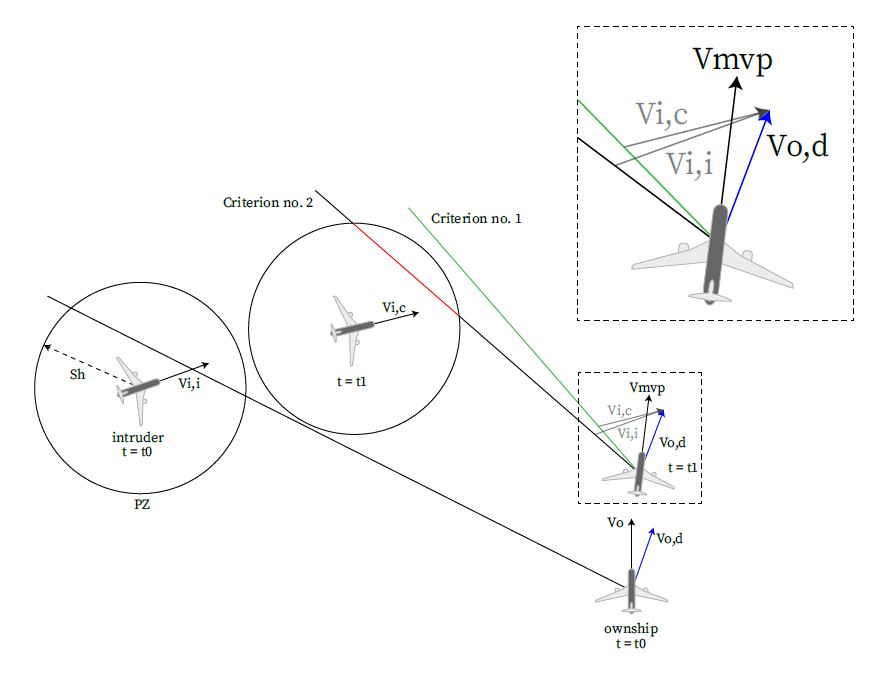 Once the problem had been identified, it was only a matter of time before a solution presented itself. Wouter: “Of course I was really happy to have discovered the problem but I wanted to get on with things right away. So I started tinkering with the algorithm and drawing even more triangles. In the end I removed an incorrect recovery component from the algorithm and added a new two-criteria method. This method starts by making a best guess for each aircraft of the desired route and velocity of the other, conflicting aircraft. Next, the method combines this best guess with the present route and velocity of the other aircraft, to determine whether reverting to the original route is possible without the aircraft getting dangerously close to each other. After this modification, I set the TU Delft computers to work testing the new algorithm on over a million flight simulations. This showed that the repetitive conflict now hardly occurred at all.” 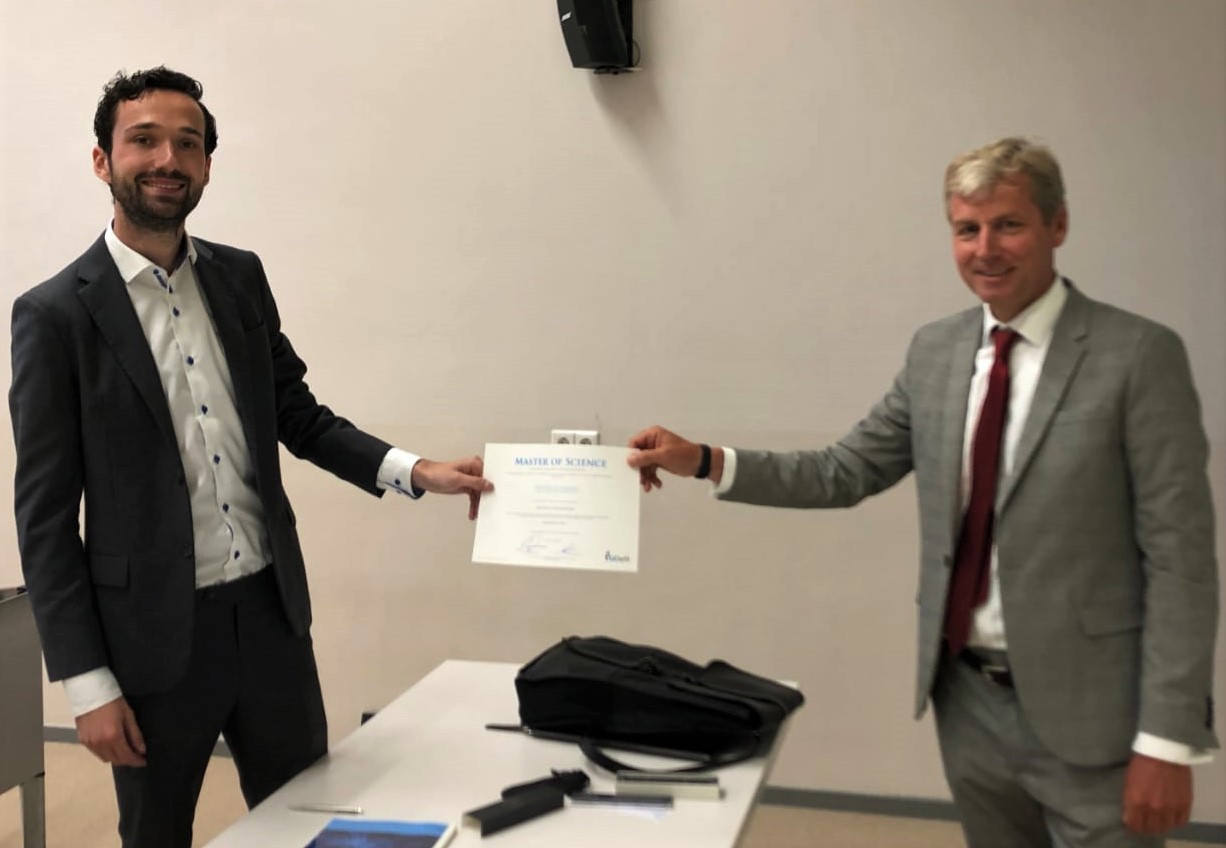 His groundbreaking Master's thesis earned him full marks. He was also voted Best Graduate of the faculty of Aerospace Engineering, which Wouter finds an extraordinary honour. “I am extremely proud of the result and the mark I was given. Beside this, I really enjoyed working on this research project and disentangling this complex puzzle.” Wouter adds that his supervisor Jacco Hoekstra is also euphoric. “He thinks it’s really great that after all these years the problem has been identified and that I was able to improve his algorithm. It was very frustrating for him that he didn't know where the problem was, and he doesn't hold it against me at all that I – a student – managed to solve it, haha. He is just really happy.”

Wouter finds it difficult to say whether the algorithm will actually be used in commercial aviation. “The aviation sector is very conservative because of all the safety risks. It is very much the question whether aircraft will ever use free (decentralised) flight. I see fewer obstacles for other types of flight traffic, such as drones or maybe flying taxis. A self-steering algorithm can reduce the risk of collision or conflict situations, and that would certainly make flying in urban areas a lot safer. The improved MVP algorithm can in any case be used right away for further research into decentralised flight. And who knows, maybe someone will succeed in optimising it yet further; of course that would be brilliant.”

According to supervisor Jacco Hoekstra, nominating Wouter as Best Graduate of the faculty wasn't something he needed to think long or hard about. He feels that detecting and solving the problem of the MVP algorithm is a truly extraordinary achievement, especially given that many an international researcher has racked their brains over this conundrum in recent decades. Hoekstra also praised the way in which Wouter was able to explain his topic in lay terms during his presentation, making it easily understandable to a wide public. Together with the Best Graduates from seven other faculties, Wouter is now in the running for the title of Best Graduate of TU Delft, to be announced on 17 November.