Robots that safely navigate busy corridors to deliver medicines to nurses. And drones that manoeuvre around people, rubbish bins and poles without smashing things up. This is possible thanks to the models developed by researcher Javier Alonso-Mora from the 3mE faculty.

Normally, students and scientists walk here, but today a drone is flying through the corridor here at TU Delft. Seemingly effortlessly, it whizzes past and between a variety of obstacles: rubbish bins, stacked boxes and poles. But then suddenly a person appears, walking straight towards the drone in the same space. This is not a stationery object but an actual moving person. ‘This is much more difficult for the drone to process. Because how fast is someone moving and are they going to make unexpected movements?’ asks Javier Alonso-Mora. This goes well too. As the drone approaches the walker, it moves to the side and flies on. The flying robot completes the obstacle course without a hitch.

This experiment, conducted by Alonso-Mora and his colleagues, is a good reflection of their research field. They investigate mobile robots that move on wheels or fly through the air and take their surroundings into account – which is why they can move safely alongside us in a corridor, room or hallway.

That’s something new. For decades, robots were mainly used in factories, where they were separated from people and could assemble cars in a screened-off area or put something on a conveyor belt, for example. ‘The new generation of robots that we’re now developing work with people and other robots. So they have to take into account how others behave. They deliver packages, for example, or cooperate by assembling or delivering something. Moreover, they’re not fixed but can move freely in space,’ he says.

The new generation of robots that we’re now developing work with people and other robots. 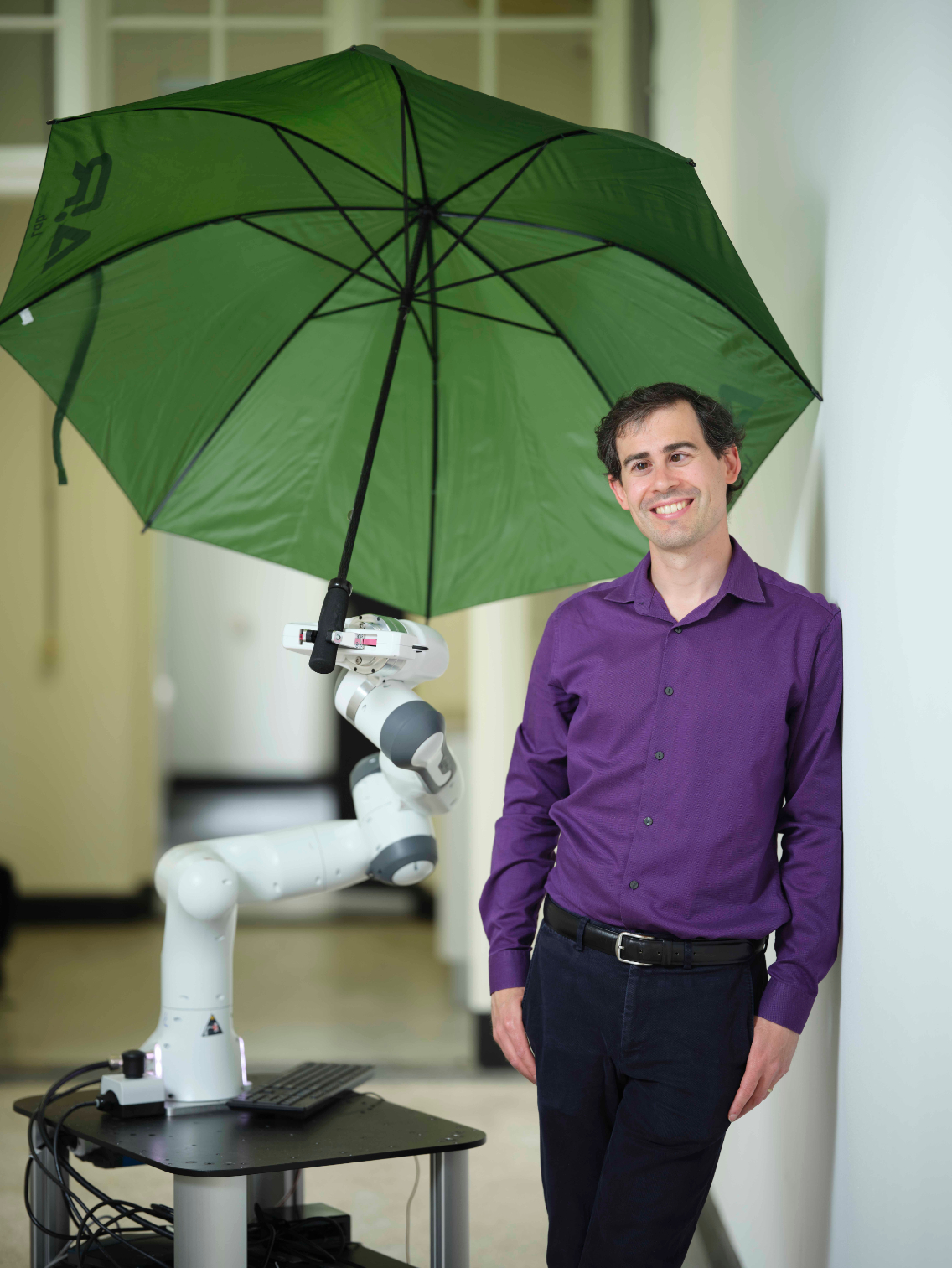 For this to work, it’s important that the robots always make the right decision. This is achieved based on models that the scientists, including Alonso-Mora, are currently developing. ‘They perceive their environment on the basis of these models. It helps them to complete a task safely,’ he says.

Humans are highly skilled at this. We’re masters at correctly predicting what will happen and avoiding other people in time or adjusting our route accordingly to avoid a collision if things don’t happen as predicted after all. Busy intersections in major cities are good examples. Cyclists, cars, pedestrians, scooters, trams and trucks weave in and out of each other. It looks chaotic, but usually goes smoothly. ‘This is more difficult for a robot. It has to constantly predict what action is safe. There are many potential outcomes, and the robot has to calculate the various permutations. That takes time. Humans, on the other hand, have so much experience that we can assess a situation at lightning speed and adapt immediately if necessary. Our models are trying to achieve the same with robots.’

An interesting example of Alonso-Mora’s research is the Harmony project he’s working on. Scientists are developing robots that help nurses, doctors and patients. For example, they bring food to patients in bed or medicine to nurses. ‘They need to calculate the best route and how to behave on the way. How do they safely navigate an area with a moving bed, a patient on crutches or a surgeon who’s in a hurry?’ 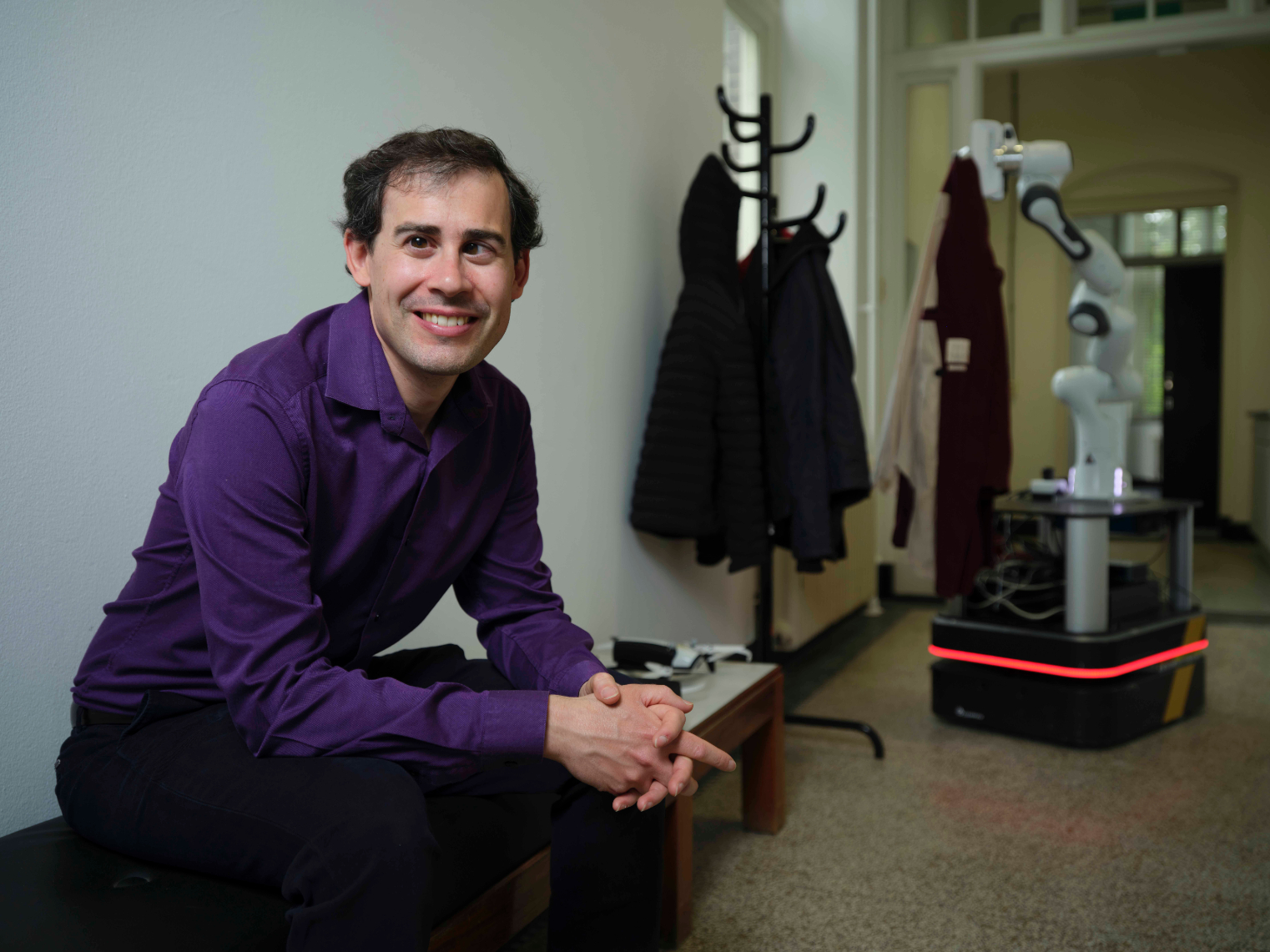 It’s important that the robots that complete difficult tasks work as well and safely as possible.

Not only do the robots have to cover small distances, but they also have to open doors and plan a route. Moreover, it’s important that they understand whether their task needs to be carried out quickly or can wait a while. ‘So the robots have to process a great deal of information, and on top of that, they have to analyse their environment and work with people and other robots. We’ve just launched this international project, and our goal is to start using demonstration robots in hospitals in Switzerland and Sweden in three years’ time. We’re creating and testing the algorithm that will allow the robots to move safely.’

It’s no coincidence that Alonso-Mora is working on this particular project. He was already fascinated by robots as a young boy. ‘I used to love playing with Lego; I could spend hours building things with it. We’re now doing something similar with robots, but in a more complicated way, because they too consist of many different parts. I’m interested in whether we can make the robots of the future intelligent. As a child, I loved reading Isaac Asimov’s science fiction, which often featured robots. The novel I, Robot, which was made into a film starring Will Smith, is a good example. It’s fiction, of course, but increasingly we’re getting closer to robots that are smart and can work with us. Whether they’re autonomous cars, drones or robots moving around in hospitals. It’s important that the robots that complete difficult tasks work as well and safely as possible.’ 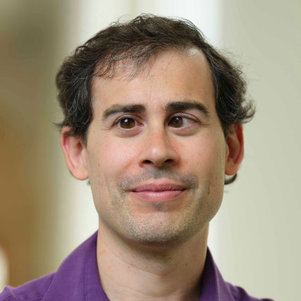