You need a lot of practical training to become a mechanical engineer. So how do you achieve that for 2,500 Bachelor's students in the time of coronavirus? Programme Director René Delfos has quite a job on his hands, but he's keeping on top of it thanks to the help of colleagues like John Lander from Campus Real Estate.

The early warning signs came after the Christmas Vacation. ‘We were told by the faculty to watch out for people returning from Wuhan’, explains René Delfos, Programme Director for the Bachelor's degree programme in Mechanical Engineering and lecturer in transport phenomena. ‘For students in the Dutch Bachelor's degree programme, it didn’t really apply, but it did for Master’s students as well as PhD students and postdocs. And soon after, we were asked what the possibilities were for quickly switching to online teaching.’ For 3mE, that did not initially seem an insurmountable problem: ‘We’ve been recording lectures on video for 15 years and posting them on Collegerama. Almost every lecture is available now. So, we completed the theory courses in Q3 using the videos. But things were more difficult for the project courses, because for those you need workshops and the opportunity to physically build things. In that case, we had no choice but to base the project marks mostly on interim results.’

A solution was also needed for the examinations. ‘Having “proctored” versions of all the different exams, using online invigilation software, just wasn’t feasible, due to form and capacity. For mathematical subjects, that use question databases, it’s possible, but it doesn’t work for our exams. That’s why, at the start of the exam, students now have to declare that they subscribe to the TU Delft Code of Conduct and, as aspiring engineers, will not commit fraud. Of course, that doesn’t prevent them from doing it sometimes. That’s why we telephoned students at random to discuss the exam to find out whether they actually did it themselves. Some potential cases of fraud have emerged; they’re dealt with by the Board of Examiners, who has confirmed quite a few of them.’ 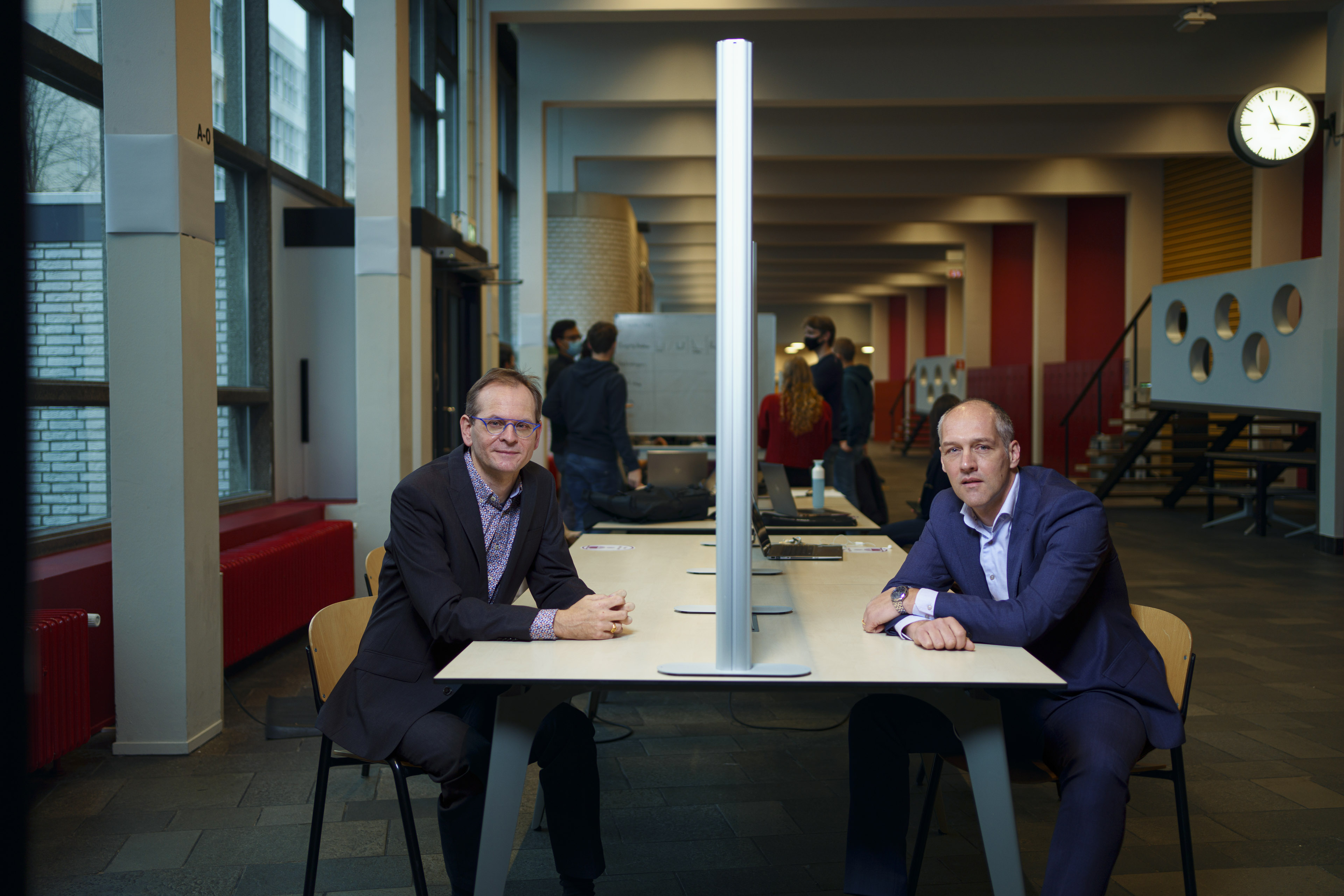 In the meantime, John Lander, manager of Services, Planning and Support at CRE&FM, had also swung into action. ‘As early as February, we were already making preparations as a precaution in case the virus came to the Netherlands, although we weren’t sure it would. And then, suddenly, the seventh person infected in the Netherlands was at TU Delft. From then on, I was having daily meetings in the central crisis team for weeks on end. It was a weird situation when almost everyone had to start working online in March: suddenly there were only around a thousand people on the whole campus each day. Normally, there are 35,000.’
‘That creates problems, because the emptier a building is, the more things can happen under the radar. That’s one of the reasons for the decision at that time to just allow one entrance to be open in each building. After a week or so, we’d organised just about everything that needed organising. That’s when you switch from the crisis phase to the stable phase. From then on, we were looking ahead to what needed to happen when the restrictions started to be lifted.’

Delfos was also anticipating that moment. Graduating students were his first concern. ‘Final projects needed to be resumed as soon as possible. If a team of students has to build a rowing robot or a wind turbine, you just can’t simulate that on a computer. Fortunately, we were able to reopen for graduating students on the Bachelor's degree programme from 5 April – there were 400 of them. They normally work in teams of four, but it was agreed that there should never be more than two students from the same team in a lab at the same time. It was also not possible for two people to use one microscope; they had to view it via a screen instead. They had to adapt their final projects to fit these rules. The lab managers had the final word in this, because they’re responsible for enforcing social distancing in the labs.’

‘In Q4 we continued to stay closed, doing as much as possible online and registering what students had missed. The biggest puzzle for me was how we were supposed to open again on 1 September. We managed it by timetabling from 08:30 in the morning until 19:30 in the evening. We also divided first-year students into large clusters, enabling them all to come to the faculty for two half-days a week, once in the morning and once in the afternoon. That made it possible to provide skills training, but with very different numbers. You’re teaching a group of twenty students in a seminar room that used to accommodate sixty. But this approach ultimately enabled every student to come to the faculty on a weekly basis. In order to achieve it, Facility Management did an awful lot of work.’

Lander knows something about that too: he coordinated the work that had to be taken up by CRE&FM and ICT as a result of decisions from the Central Crisis Team. ‘FM went to all the buildings to adapt them for social distancing purposes. They started by measuring all of the rooms to see how many people would fit in. The ventilation issue was also a factor. Although the actual floor area might make it possible to fit thirty people in, that figure dropped to twenty when you factored in ventilation. That then became the maximum. It was a difficult job, that also involved quite a lot of discussion. We’re currently doing the same for the meeting rooms.’ Delfos: ‘On top of that, the rule allowing a maximum of thirty people per location was then introduced. It means that we have rooms that will accommodate 43 people in terms of space and ventilation, but it’s not currently permitted.’

Perhaps the greatest challenges for Delfos were projects and laboratory courses. ‘Our 700 first year students take part in mechanical design projects. Some 96 project groups of seven or eight students each participate in it. How could I ensure that they were all able to work for two hours at a project table while socially distanced and in a way that's Covid-secure? Together with Education & Student Affairs and the project teachers, we came up with a solution.’

Even though we’re doing so much online, it’s still one huge puzzle. Every room is fully timetabled virtually all the time

‘I myself – together with fifteen student assistants and PhD students – teach a second year thermofluids practical  for 500 students. We spread the test set-ups across three different labs across the building, so that there are always six test set-ups at an appropriate distance from each other. Material science laboratory courses and turning and milling instructions also need to happen physically on campus. So, even though we’re doing so much online, it’s still one huge puzzle. Every room is fully timetabled virtually all the time. Morning and afternoons, there are students in the lab working on robots, heat exchangers, wind tunnels and other machines.’ 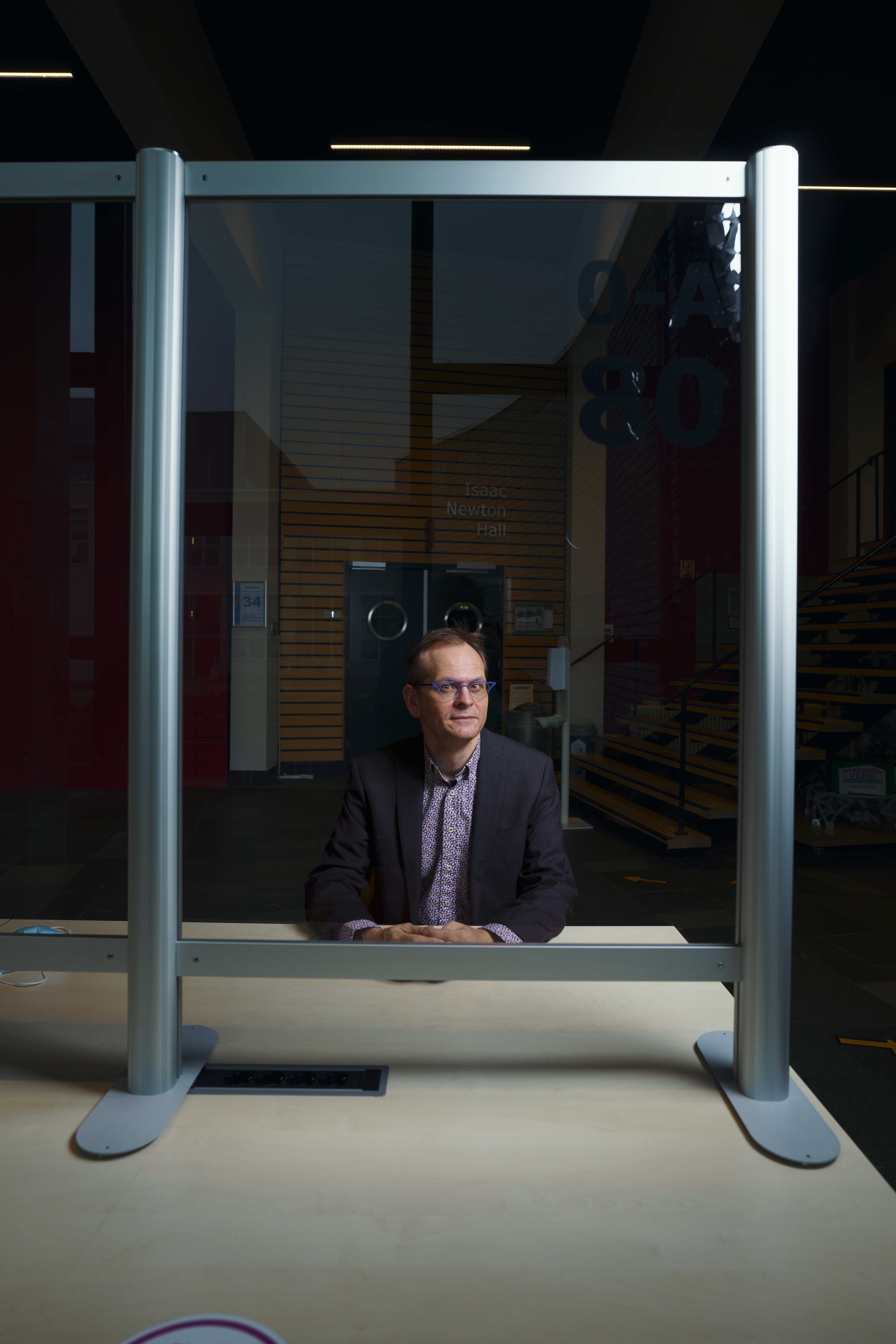 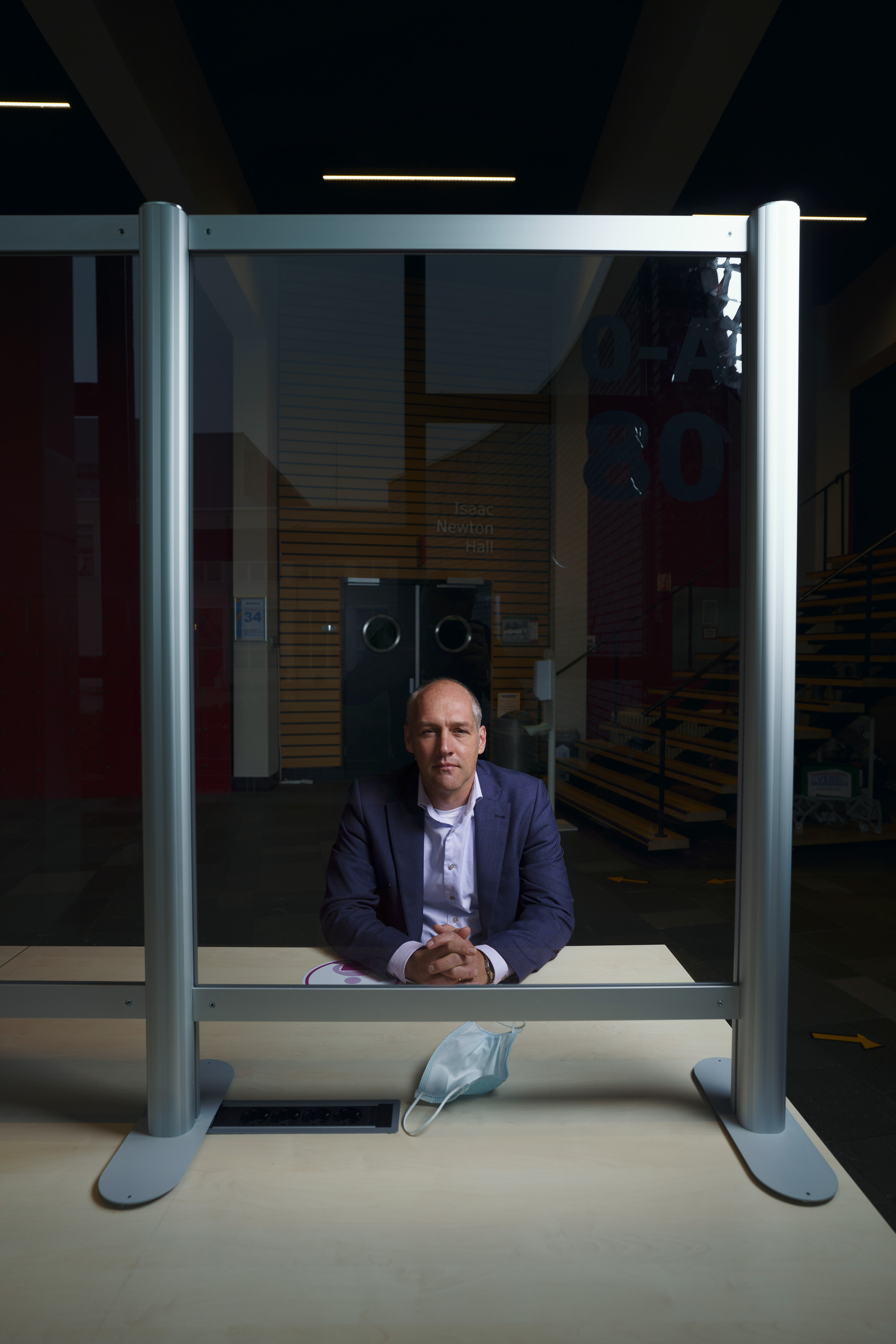 The fact that more students were back on campus meant that logistics began to play a role. ‘A special working group started working on that. What traffic flows are there on-campus and how can we regulate them? One example involved moving the bicycle racks at 3mE to the back of the building in order to prevent everyone using the same entrance. We also spoke to the transport companies about the anticipated peak periods. Because the teaching has been spread out, things have not been bad at all so far’, says Lander.
These kinds of discussions also involve looking ahead. ‘We talked to the municipality about potential bottlenecks. Take a bridge like Abtwoudsebrug, for example. When it opens, there can be a queue of cyclists 100 meter long. What do you do about that kind of bottleneck? It may be necessary for the bridge to stay closed between 08:30 and 09:00. That’s not an issue at the moment, but it’s important to have these discussions now.’

Both men look back on a period of really hard work, always having to deal with new measures. ‘On the day that I wanted to open the scheduling for my thermodynamics laboratory course in Brightspace, there was a government press conference planned, so we decided to wait and see. It turned out that the measures were being tightened for a two-week period. We just postponed the course at that point, and had another close look at security measures’, says Delfos. Lander: ‘At the start, we also kept getting lots of new questions. How much alcohol needs to be in detergents in order to eradicate the virus? Is a member of the in-house emergency response team permitted to resuscitate someone with coronavirus if needed? At the time, no one knew. Whenever new national measures are introduced, it is a tense moment: what will it mean for us? As time moves on, we gain more control of the situation, but we still don’t know how long it will last.’

‘It’s a completely different world. There’s a lot we don’t yet know. That’s why everyone, the government, the Outbreak Management Team, TU Delft, is playing it by ear’, says Delfos. ‘I was lucky in that my courses are in the first two quarters, so I had a lot of time to focus on this in March and April. We were continually trying to work out what was and what wasn’t permitted or possible. Almost all Bachelor's projects could be resumed, albeit with strict logistics. We now have a nice modus operandi, so, overall, things are going well. I also meet students every day who are happy to be back at the Faculty on a regular basis. You did a great job there, John!’

From the beginning of the crisis, I noticed how willing everyone was to make sure that we could continue

Lander: ‘Yes, we’re doing a lot of organising. Dividing up the rooms and putting arrow signs on the floor. But, ultimately, it’s about the people themselves. That’s quite another thing. You can try to manage people’s behaviour using signs and arrows, but if they go wrong, who calls them to account?’ wonders Lander. Delfos has the answer: ‘In the workshop, they made twenty planks each measuring 1.5 m in length and there’s one in lots of the rooms. Occasionally, you take one to a group of students and say: don't forget! That helps.’ And while we are on the subject of behaviour, Lander has a final point he would like to make: 'From the beginning of the crisis, I noticed how willing everyone was to make sure that we could continue. It was nice to see how we were able to find each other in the organisation at such a time.’ 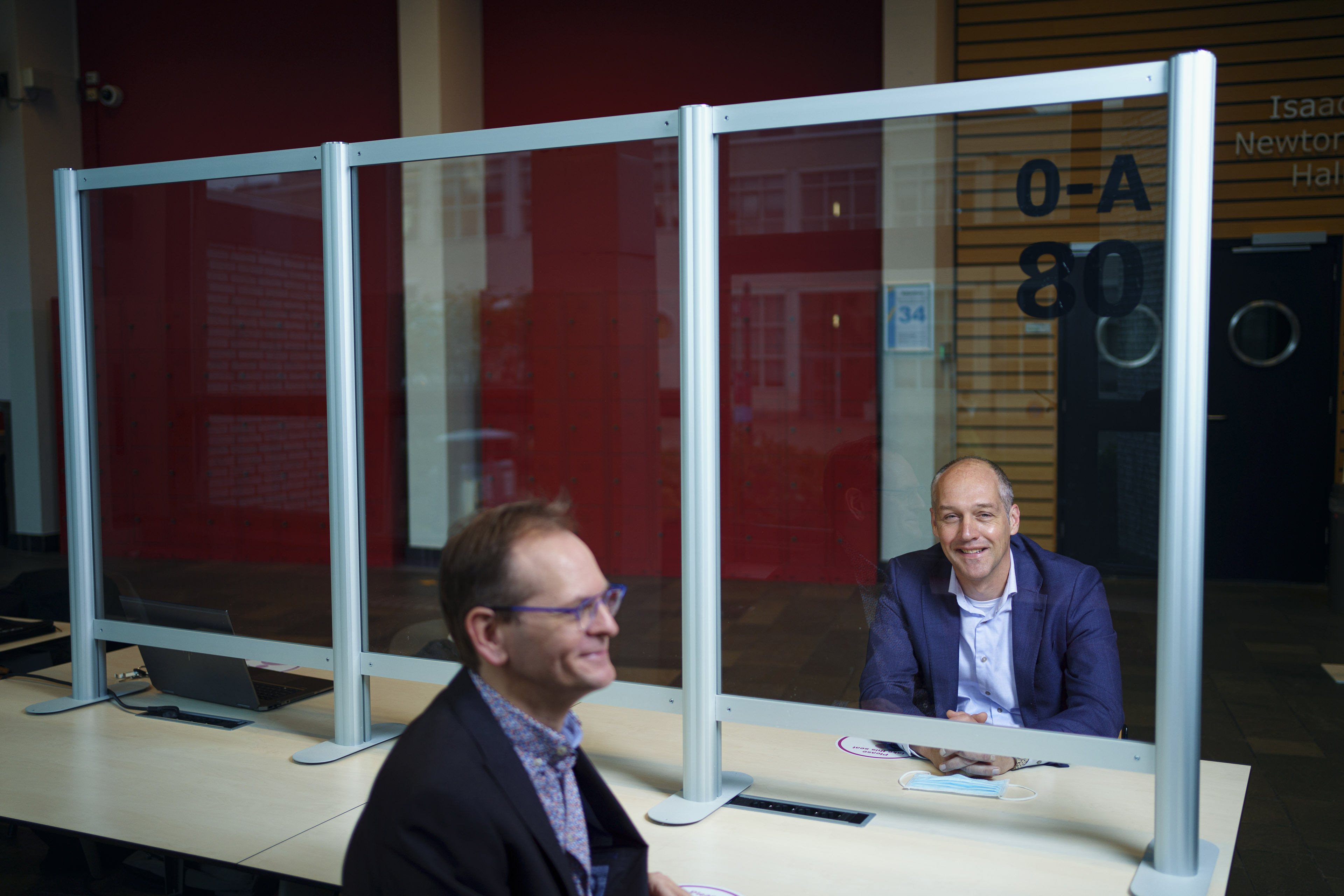