The first test flight of the Flying-V

Since 2017, a team of researchers from TU Delft has been working on a new, more sustainable type of passenger aircraft, the Flying-V. After the research phase, July saw an exciting and significant next step in the programme: the scale model’s first test flight. Would the aircraft remain stable when airborne, even at low speeds?

It was a week that researchers Malcom Brown and Nando van Arnhem had really looked forward to. After a period of designing, calculating, constructing, measuring, adapting and testing, a scale model of the Flying-V was ready for flight in July. Van Arnhem: “The Flying-V is a new aircraft that consists of two wing halves with integrated oval fuselages for passenger seating. A merging of the fuselage and wing reduces the resistance and weight, so the aircraft is expected to have a 20% reduction in fuel consumption compared to an Airbus A350 on a similar mission. The prototype of the concept was created by aircraft manufacturer Airbus. KLM also joined the project at a later stage. Together with TU Delft, we are the main coordinator, working on the design as a team of five.” 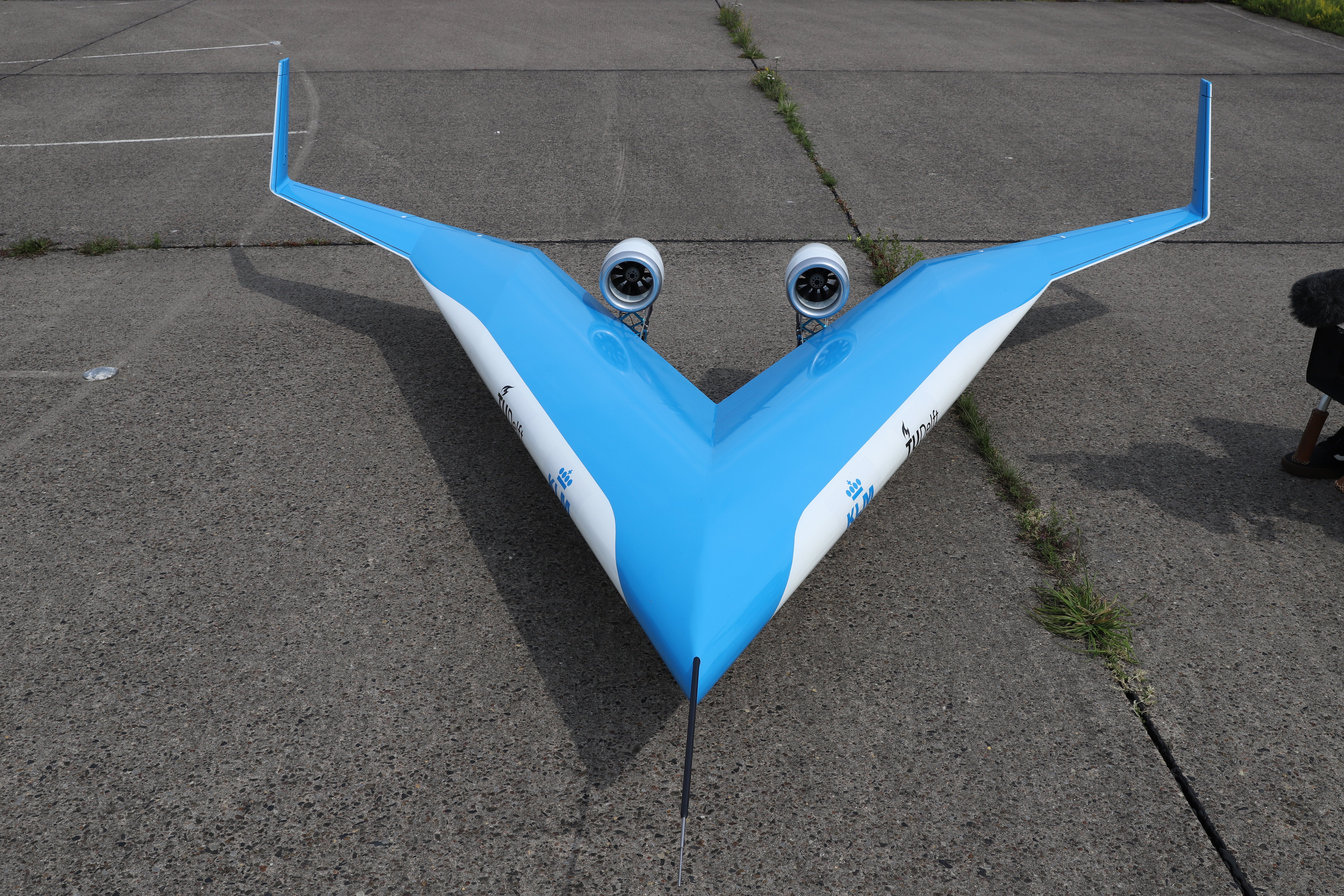 The researchers wanted to use a test flight to identify the flying behaviour of the Flying-V. Van Arnhem: “We were particularly interested in the aerodynamic properties, i.e. how the aircraft reacts to conditions in the air. The Flying-V is equipped with on-board acceleration and flow meters that closely monitor all movements and transmit data to the ground. In conjunction with data from the wind tunnel tests and computer models that calculate the aerodynamics, data from the test flights are essential for predicting the behaviour of a Flying-V at its true size. In addition, the test flights help fundamental research into scaled-flight testing for unconventional aircraft types.”

The demonstration flight in July – the first one in a longer series of test flights – was performed at an airport in Germany. Van Arnhem: “That was at the request of Airbus, because they carry out their own tests there and have permission for experimental flights. We had already been able to carry out some taxiing trials in the Netherlands, including testing the communication systems.” “It was still quite a challenge to get the Flying-V to Germany”, says Brown. “The aircraft has a wingspan of three metres, slightly too wide to transport it horizontally in a truck. Fortunately, a student devised a rather clever construction that could transport the aircraft diagonally.” 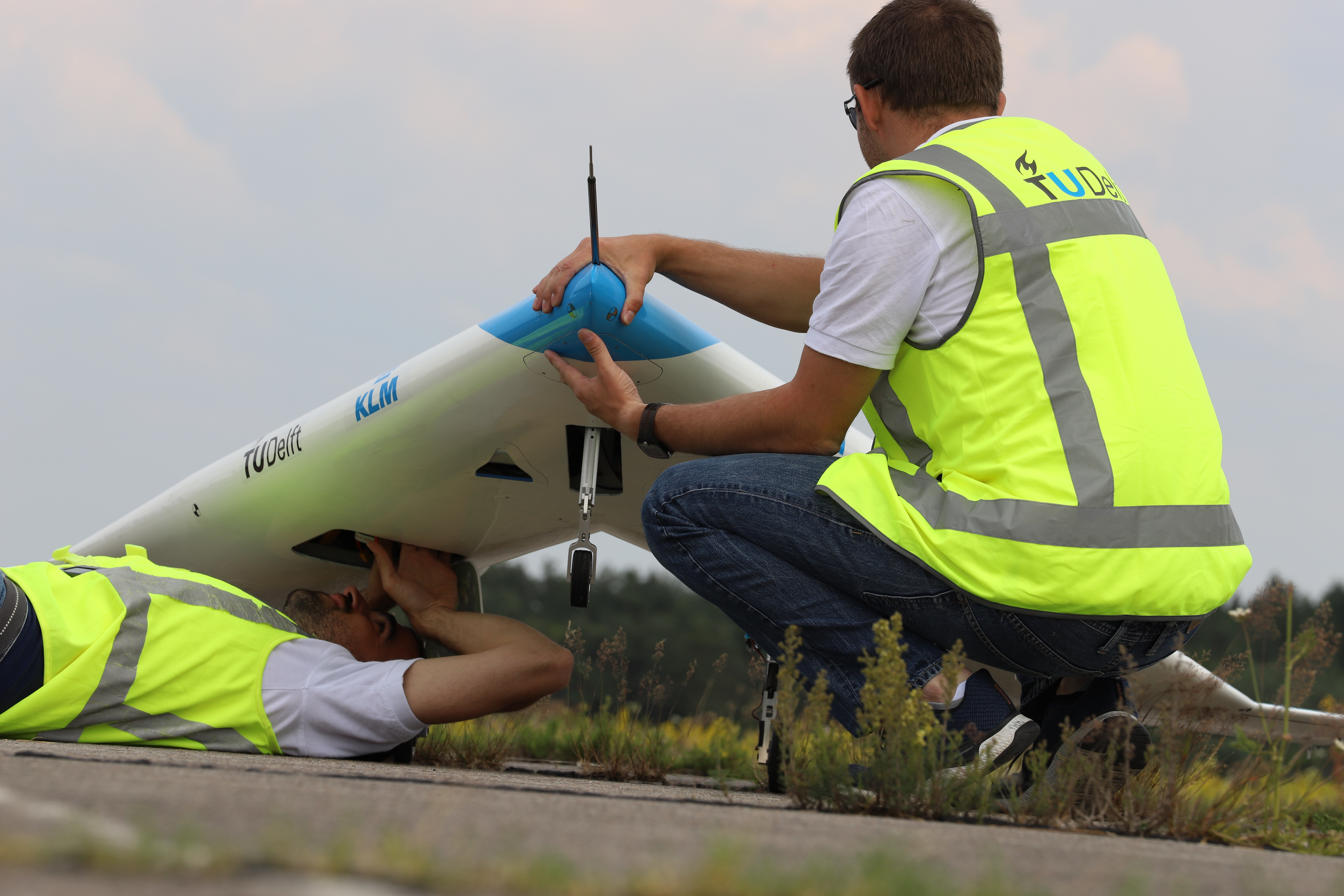 Once in Germany, the aircraft could not get airborne right away. Brown: “There are always things that you can't predict beforehand or can only test on the spot. For instance, while checking the range of the radio signal, we discovered that there was interference on the line. The antenna did not forward critical data regarding for example speed of the drone to the ground station. They solved this issue by installing a better radio module. It also cost a great deal of time moving the centre of gravity. If that were miscalculated, the aircraft would be unstable and might crash. After some balancing tests, the centre of gravity appeared to lie a little further back than we had thought based on previous calculations. As a result, we had to put additional weight in the nose and move the landing gear slightly forward.”

Searching for the right time

As they only had four days to fly, the adjustments caused a loss of precious time. Brown sometimes found it difficult to stay patient. “As Chief Engineer, I had to determine when we could fly. That was quite stressful, because everyone wanted to fly as quickly as possible and make as many flights as possible. But, if the radio’s backup system should malfunction, security could be compromised and we might miss critical data. I had to be sure that we would fly under the best possible conditions. It was important to say ‘everything works, now we're going for it’ at exactly the right time.”

Eventually, the Flying-V was ready on the runway on the last test day. Van Arnhem operated the aircraft manually from the ground using a remote control. He was under a fair deal of pressure. “Everything has to be right on take-off. A tiny deviation in the nose wheel might veer the aircraft off the runway. Then the most crucial second follows: the moment when the Flying-V lifts off the ground, i.e. rotates. If I were to rotate too early and the aircraft’s angle get too steep, it could become uncontrollable. Fortunately, the aircraft responded as expected.”

While Van Arnhem followed the aircraft with the naked eye, Brown and electronics expert Alberto Ruiz Garcia received all the data transmitted by the Flying-V on a screen. Van Arnhem: “Malcom and Alberto provided me with data about the speed, altitude and angles of the aircraft. So, we were actually flying with three pilots. The flight itself only lasted for five minutes. The landing was still a bit nerve-racking. In the air, the Flying-V reaches a speed of 150 kph. At that speed, it is difficult to get such a small aircraft to land on a narrow strip.”

Despite the short duration of the flight, the researchers are more than satisfied with the first test flight. Van Arnhem: “The Flying-V was fairly stable and more controllable than we had thought. As expected, there was a strong yaw-roll coupling, causing the nose and wing tips to go back and forth during certain manoeuvres. We can use such insights to further develop the Flying-V. For instance, by applying a damping system – which normal aircraft often have as well – or by enlarging the winglets (the upright ends of wings – ed.).” 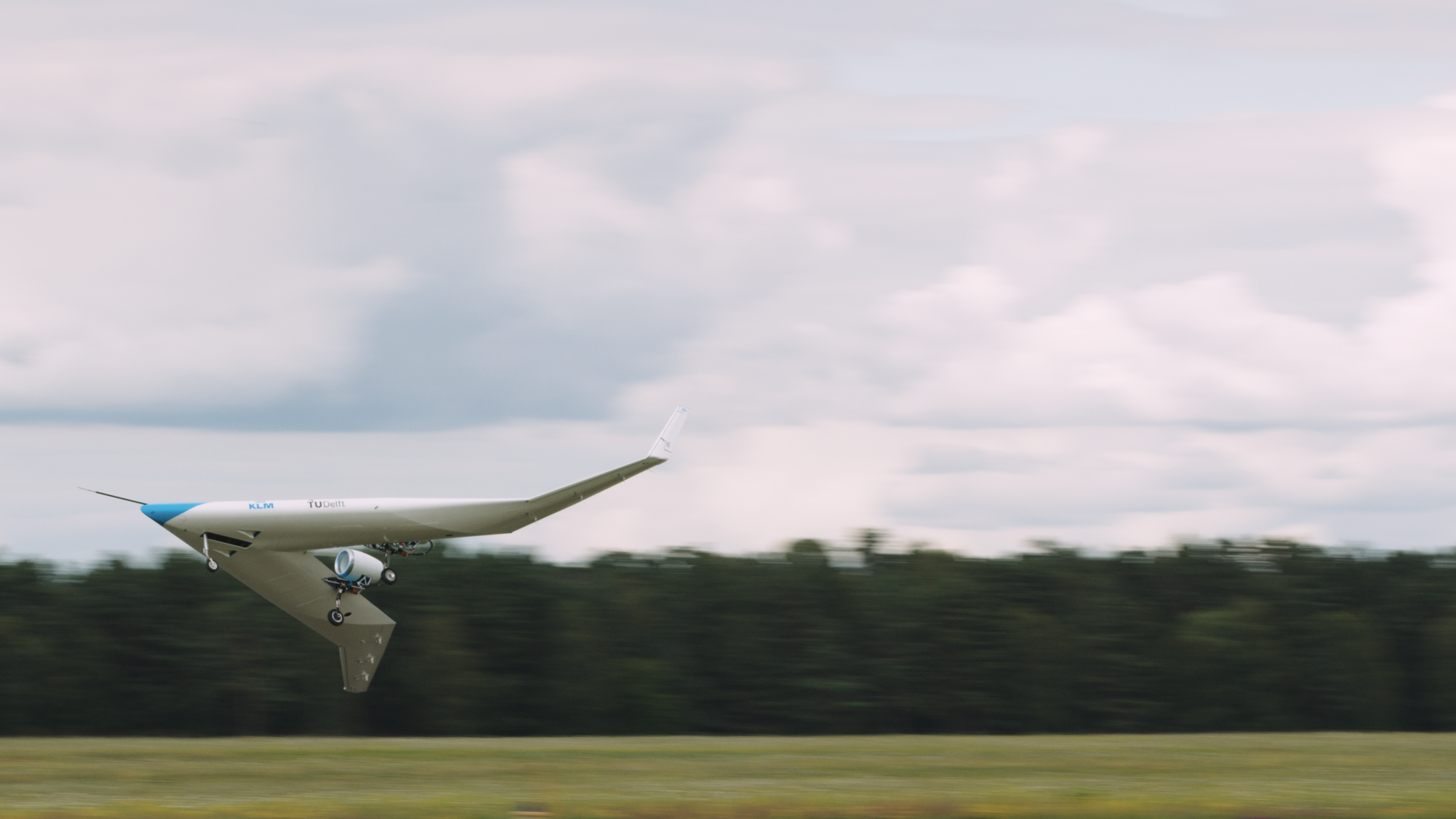 Proud of the team

Brown hopes to be able to run new tests with an improved model soon. “In fact, we’re only at the beginning of the entire research, but we now know in any case that the scale model of the Flying-V can fly, and will continue to fly and land safely again. That feels like a huge step, of which I am very proud. All the more because we worked so hard with a relatively small team. KLM and Airbus were also very happy with the initial airborne trial.”

Van Arnhem thinks it will still take a couple of decades before revolutionary new passenger aircraft models will reach the market. “Aviation is a relatively conservative industry and tends to develop step-by-step. It is for good reason that the ‘tube and wing’ has been the leading model since the start of commercial aviation. Yet, in recent years, I have noticed that the aviation industry is increasingly open to new ideas, particularly due to the realisation that everything really needs to be more sustainable. Collaboration between Airbus and KLM shows that there is also a real willingness to invest in knowledge, innovation and sustainability.” 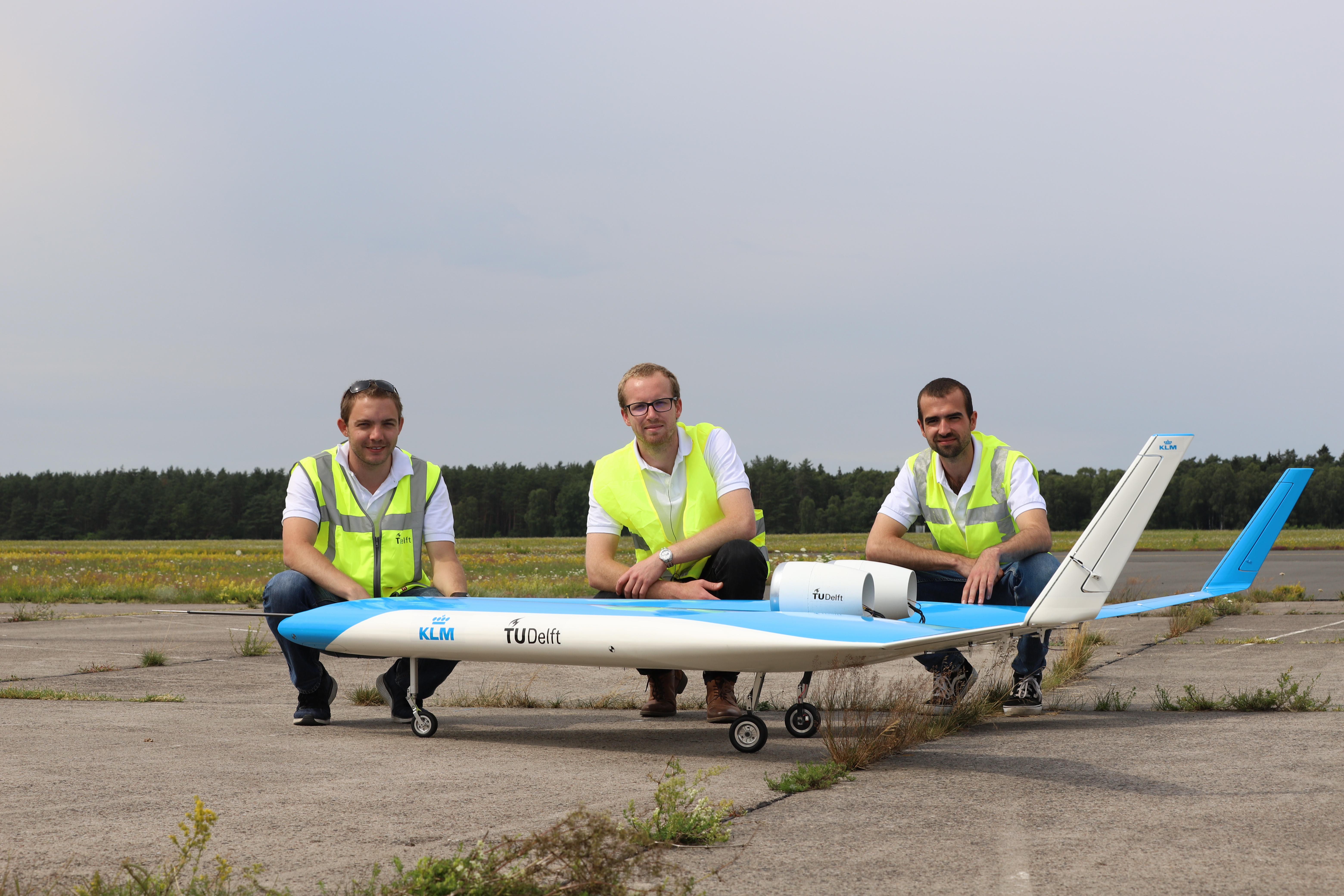 The magic of catalysis for CO2 conversion