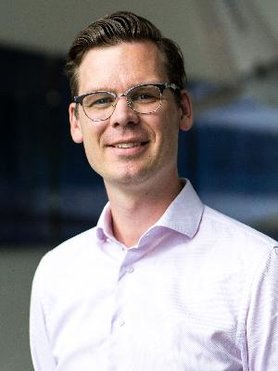 Dr. Roelof Vos is Assistant Professor at the Aerospace Engineering Faculty of Delft University of Technology. His research focuses on the development of aircraft analysis methodologies for the conceptual design phase, the design of new aircraft configurations, and the assessment of emerging aviation technologies.  He teaches courses on aircraft design, aerodynamic design of transport aircraft, and aerodynamic design of combat aircraft. He also teaches a short courses on  Aerodynamic Design and Hybrid-Electric Aircraft Design. He is author of the textbook "Introduction to Transonic Aerodynamics." Furthermore, he has published 15 articles in peer-reviewed journals and over 50 conference papers. He has worked on various projects funded by the European Commission, NWO, and through public-private partnerships. Vos is an Associate Fellow of AIAA and Secretary of the AIAA Aircraft Design Technical committee. He holds a BSc degree in Aerospace Engineering from Delft University of Technology which he received in 2004 and an MSc degree, which he received with honors in 2005. Vos obtained his PhD degree from the University of Kansas in 2009 under sponsorship of the Fulbright Program.

Dr. Vos is an Assistant Professor at the chair of Flight Performance and Propulsion. He specializes in the assessment of new aviation technologies and aircraft configurations that enable more fuel-efficient air transport. To support this, he develops dedicated software that enables the assessment of new technologies with respect to important aircraft characteristics such as fuel consumption, aircraft weight, and aerodynamic efficiency. This has resulted in the Aircraft Design Initiator, an automated aircraft synthesis program that is used throughout numerous externally-funded projects. By continuously adapting this program it can be used to assess the impact of new aviation technologies on. Technologies that have recently been studied with this program include: hybrid-electric propulsion systems, maneuver-load alleviation through wing movables, and  liquefied natural gas as fuel. Furthermore, aircraft configurations with tail-mounted propellers, blended-wing bodies, and a propulsive empennage have been studied. A completely new aircraft configuration for long-haul travel, the so-called Flying V, has recently been studied in terms of aerodynamic performance (CFD an wind tunnel tests), cabin design, and structural weight.