‘It’s been surprising to see what determination, science, and solidarity can really do. In literally four months we were able to go from nothing to a working machine, produced in a country that supposedly cannot feed its own population.’ Diego Quan, founder of non-profit Respira-Guatemala, sometimes cannot fully believe the success his team has had in setting up a local production line and assembling and delivering ventilators to Guatemala this past summer. The non-profit partnership in Guatemala with help from dr. Gerwin Smit and Project Inspiration of the TU Delft aim to produce around 100 ventilators by the end of this year, and another 160 in the first five months of 2021.

Quan, who is from Guatemala, saw how the COVID-19 pandemic was affecting the Central-American region. Not only is the pandemic a major global health crisis, it also exacerbates other domains such as poverty, economic security and inequality, and weak healthcare systems. At time of writing, Guatemala has around 105,000 cases of corona, of which 6926 are active. This is particularly devastating, as Guatemala has the smallest number of hospital bed per capita in the region, and only 56 mechanically invasive ventilators dedicated to COVID-19 patients in the entire country. 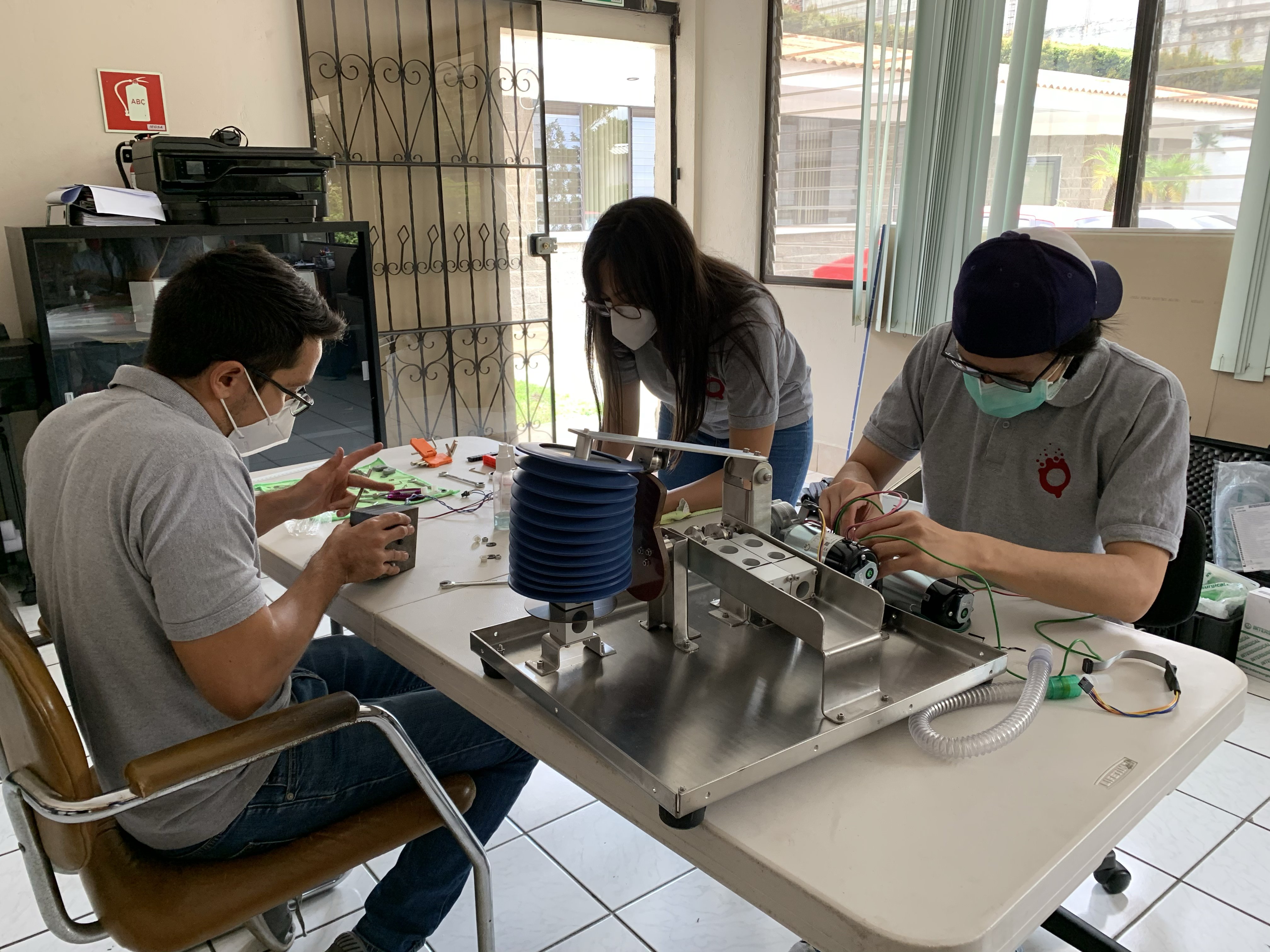 The team assembling a machine in Guatemala

‘[I knew] that developing countries would be hit much harder as their health care systems are much less prepared than those of developed nations,’ Quan explains. ‘Hence, we continued with the same motivation that lead me and my team to create our first start-up (“Quantum Energy & Engineering”) , but this time focusing on developing a ventilator.’ At the TU Delft, Project Inspiration was already working on developing a low-cost, easy to manufacture ventilator that can be rapidly built anywhere in the world. The ventilator model is based on an East Radcliff Ventilator that was borrowed from the Boerhaave museum and which was the standard medical ventilator until the 1980s. Project Inspiration in collaboration with the TU Delft Process & Energy department donated a full mechanical system to Respira-Guatemala. The updated ventilator model design was adjusted with -among other things- newly printed circuit boards and other components which are produced both in the Netherlands and in Guatemala (not everything can be produced on-site yet), and assembled on location in Guatemala.

The biggest positive impact [of this experience] is to have the evidence that determination, science and solidarity can actually transform reality into a more beautiful and just place.

Quan focused on setting up a local network of different actors in Guatemala who could help set up a production and implementation process, which includes health professionals, universities, government officials, and manufacturers. The collective work of all these actors ensure that components can be manufactured or imported into the country, machines can be produced, and put to use in hospitals. With this help the team produced two full mechanical systems, which withstood a stress test to ensure its reliability that lasted over three weeks without any errors. The producer –Talleres Hernandez- is now estimated to have enough capacity to produce up to eight full mechanical systems in a week.

The project was not without hurdles on the road, however. While Quan was able to find a variety of partners willing to assist in helping getting the project up and running, there was a disappointing lack of financial support available from within his network. This led to Quan and his friend Oscar Flores –who leads the project on-site in Guatemala- to fund the development of the first two machines with Quan’s student loan and Flores’s part-time job salary. ‘It seemed like everyone was in a state of shock, resulting in a monetary contraction.’ Quan reflects.

A larger tragedy occurred when Daniel Hernandez -owner of Talleres Hernandez- passed away shortly after completing the first machine. Not only did the team lose a good ally and friend, Talleres Hernandez had agreed to support the initiative by producing the moulds and mechanical elements of the ventilator, and was the only production facility they knew was capable of producing the designs made at the TU Delft to a high enough quality to pass the tests. Quan: ‘We struggled to develop the same relation with his son and daughter who assumed the lead of the workshop, but who we didn’t know very well.’ Quan and Flores continued conversations with Hernandez’s children, ‘until they saw that we were serious about this project and want to continue to work towards honor[ing] the legacy of their father.’ They managed to foster a new relationship with Hernandez’s son and daughter, and the partnership was able to resume.

Together with their partners, Respira-Guatemala aims to produce around 100 ventilators by the end of this year, and another 160 in the first five months of 2021. In the long-term Respira-Guatemala aims to produce 320 improved ventilators, to help better prepare the entire Central-American region for future health crises such as the current pandemic. In order to meet their goal of providing sufficient equipment for local and regional hospitals, the local production capacity needs to be scaled up and consolidated. In addition, the team’s researchers will continue improving the model in order to suit emergencies other than the COVID-19 pandemic. Production is now subject to the decisions of the Ministry of Health and the presidential commission for COVID-19, who are backing the initiative. Respira-Guatemala is also awaiting the decision of the Ministry of Health on human testing, which would be carried out by the faculty of medicine of the Mariano Gálvez University of Guatemala.

The work is far from done, but Quan remains optimistic: ‘This really makes you wonder what are the real causes of poverty, inequality, and climate devastation. If a group of students and professors was able to create a machine like this with very limited resources, then the misery that exists around the world is simply lack of political will.’