The TU Delft Solar Boat Team presents the design of the first Dutch solar boat for the open sea.

For the first time in Dutch history, the TU Delft Solar Boat Team is taking the step to develop a solar boat for the sea. It will be a trimaran, a boat with three hulls, which will completely control the ocean on solar energy. On Tuesday evening, January 15, the team presented the new design of the boat. With this boat, they plan to win the world championship for solar boats in Monaco this summer and attempt to break a world record by crossing the English Channel as the fastest solar boat in the world.

Never before has the TU Delft Solar Boat Team built a solar boat that will defy the open seas. Besides being the first Dutch team, it will also be the first student team to take on this challenge. The design is completely different from previous years, when boats were built for the inland waters. Over the past five months, the 26 students of the TU Delft Solar Boat Team have been working full-time to create the most optimal design. In order to cope with the high waves and heavy gusts of wind on the open sea, this year's boat will take the form of a trimaran. This is a boat with three hulls, so the boat can be built widely to provide the stability that is needed. With a larger solar boat, there will also be a considerably larger solar deck. The solar deck will be no less than 28 square meters, which is the same size as nine double beds together. With such a large surface, the energy that can be obtained from the sunlight is maximized. Due to the use of hydrofoils, the trimaran will not only be able to sail but can also fly above the waves at high speed. These hydrofoils lift the entire hull out of the water, reducing the water resistance drastically. This allows the solar boat to achieve a high speed on the energy that is only obtained from the sunlight.

Now that the design of the trimaran has been completed, the team will start with the production. "After five months, our design is complete: All the sub-systems have been perfected and we have carefully considered every detail. The next challenge is the production phase, the actual realization of this design", says the Team Manager Kristian. In just three months, the solar boat will be fully produced and assembled so that the boat can defy the waters for the first time in the spring. In the next months after, the team will test and optimize the boat, so that at the start of July it will be ready to battle against world-class boats during The Offshore Challenge, the world-championships for solar boats, in Monaco. Not only will they compete for the world title, the students will also go for a world record attempt at the end of July by crossing The Channel as the fastest solar boat ever. The team hopes to show how powerful sustainable energy can be at sea. 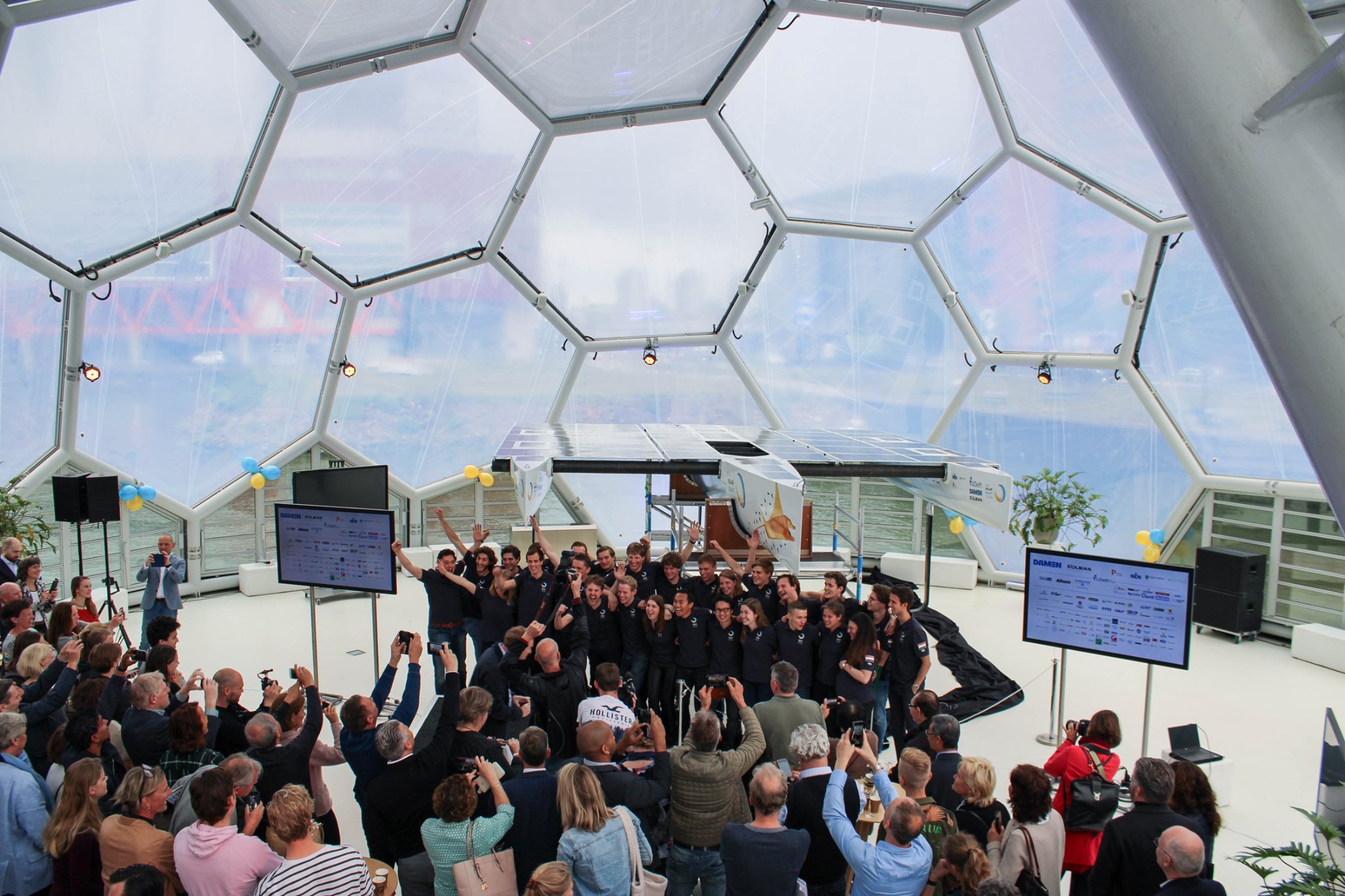 The current team consists of a group of 26 students from ten different faculties at the TU Delft. Since its foundation in 2006, the TU Delft Solar Boat Team has been trying to inspire the maritime sector to become more sustainable. Until this year, the students participated in races for solar boats on inland waters. In this way, they have shown what a student team can achieve through the innovative use of solar energy. This is the first year that they are taking on the offshore challenge. The team wants to show that a lot is possible with sustainable technology, even on the open sea. Furthermore, not one, but three passengers can sail in the boat this year. This is a big step towards passenger shipping, which will show that sailing on solar energy is also a viable option.