Researcher Hayo Hendrikse (CEG) has developed a new model that gives accurate calculations of the effects of sea ice on offshore structures, such as wind turbines and oil and gas platforms. It turns out that ice causes less wear and tear in these structures than was previously assumed. Thanks to a successful partnership with Siemens Gamesa, Hendrikse's model is now being used in the construction of new offshore wind farms.

If the IJsselmeer should ever freeze over again, Hendrikse will skate to one of ‘his’ wind turbines, which will be soon under construction there. “There are already two projects where the ice load is determined with my model”, he explains. “I'm really pleased, particularly as they are Dutch projects. It shows that this research is also relevant here in the Netherlands.”

The original plan had nothing to do with wind turbines. In 2010, the focus was on the construction of oil and gas platforms in the polar regions. "The oil companies were lacking a model that could predict the dynamic interaction between ice and the structure.” There were some existing models, but none of them met the quality standards required for a good design. There was no scientific consensus about ‘what precisely happens in the ice’. 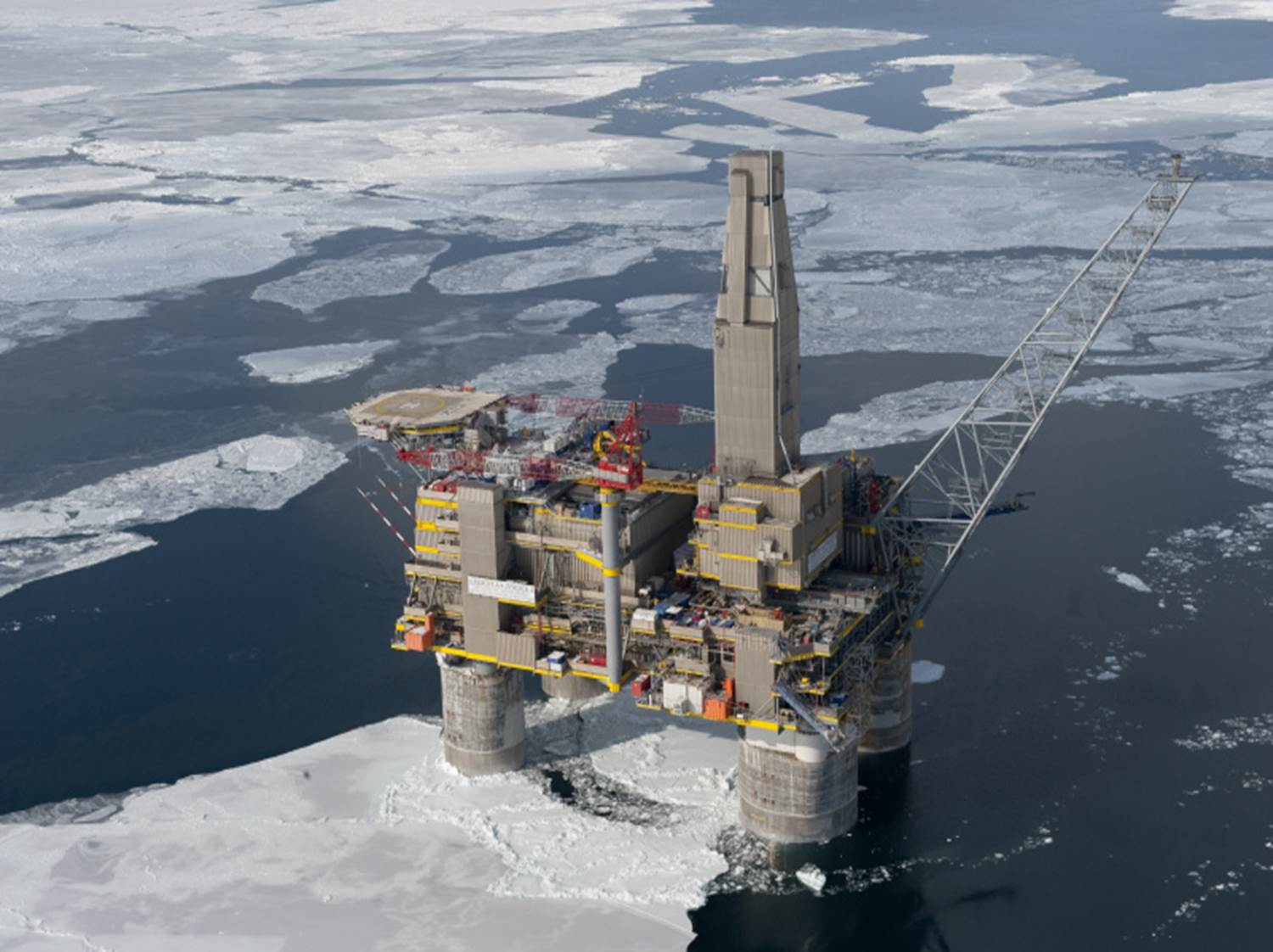 Sea ice (expansive sheets or sections of partly frozen sea or lakes) is driven by wind and currents, and when it comes into contact with a platform it causes the structure to move slightly. Once the ice breaks up, the structure moves back to its original position. The force and moment of the ice breaking depend on the dynamic properties of the structure.

In very flexible structures this may cause an interaction in which the breaking of the ice coincides with the movement of the structure, resulting in strong vibrations. That, in combination with metal fatigue, can weaken the structure with all the risks this entails. 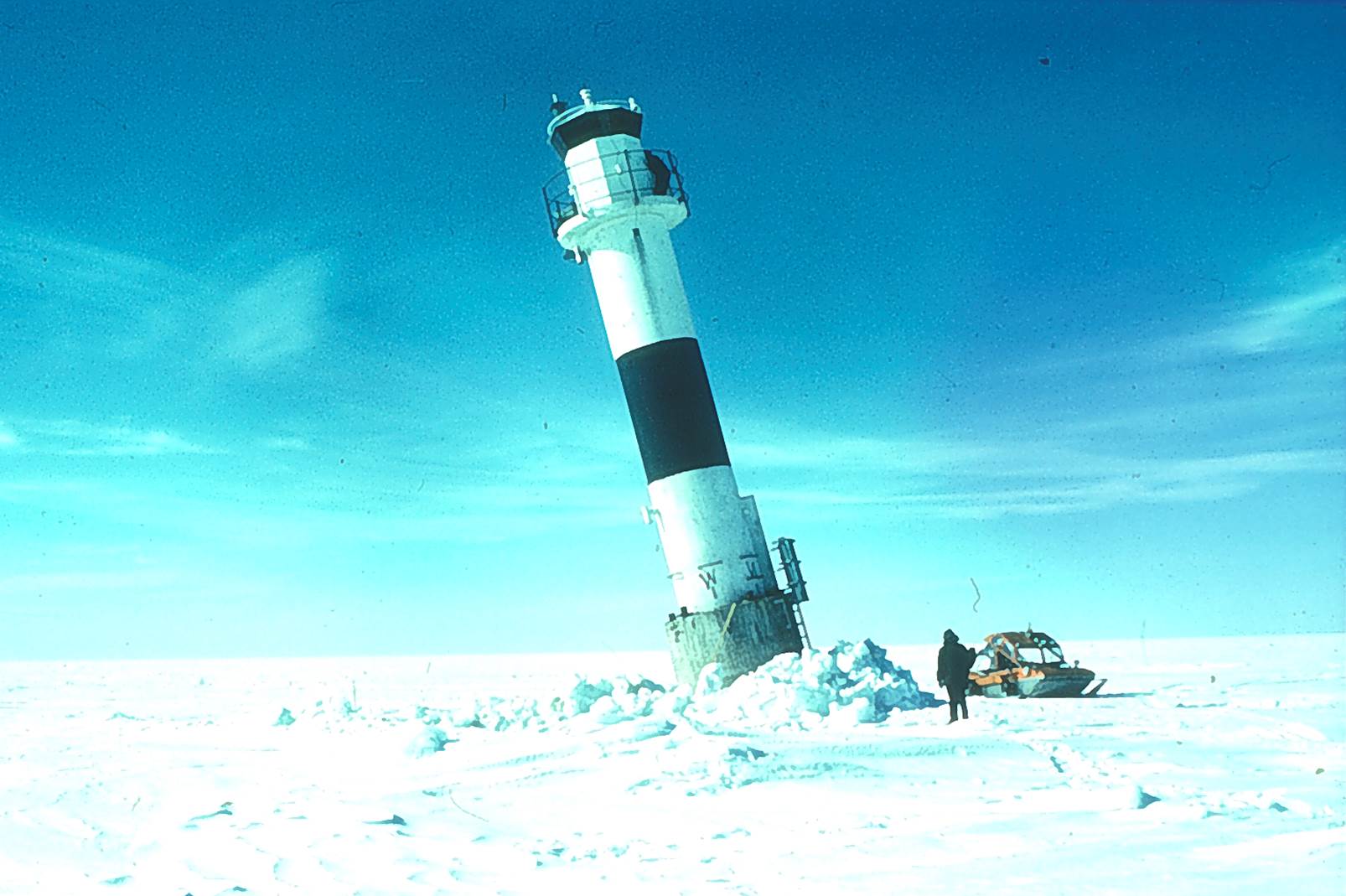 It was to predict this dynamic interaction between the ice and the structure that Hendrikse developed his model. “By the time we had finished, the oil price had dropped so sharply that there was no longer any market for the model”, he explains. On the other hand, offshore wind farms were starting to spring up, including in places that often freeze over during the winter. “As our ice model was suitable for various structures, we simply adapted it for use with offshore wind turbines.”

Ice can have a much more serious impact on offshore wind turbines than on oil platforms. “They're really just like outsized cocktail sticks with a huge mass on top.” The tower reaches some 120-130 metres above the surface and there's quite a lot of movement when the ice pushes up against it, heightening the risk of the dangerous interaction.

“You can get a sort of whiplash effect: the ice pushes the tower out of alignment and it bounces back at the moment that the ice breaks. This means the blades of the turbine at the very top have to accommodate the extra force. If you don't take this into account in your design, something may break off in extreme ice conditions.”

Research has revealed that existing methods of calculating the effects of ice lead to ‘conservative’ designs. “Some of them are so conservative that they jeopardise the economic feasibility of the project.” However, Hendrikse's model showed that in many cases, the force exerted by the ice is actually lower. This makes it possible to build wind turbines without extra reinforcement in areas where this had been considered impossible up until now. 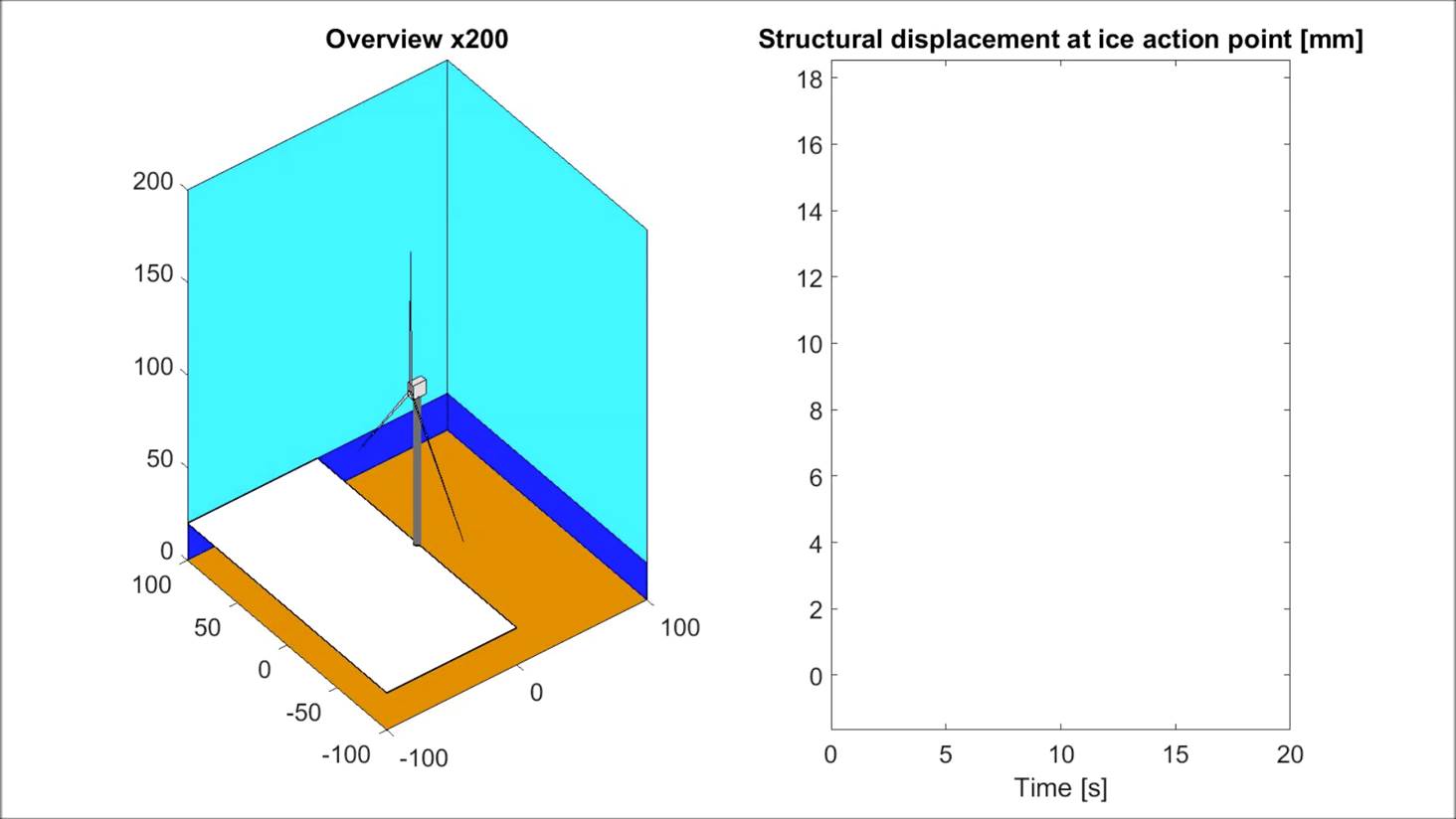 “We can ensure that it is feasible to build wind farms in icy areas, without the need for additional measures”, says Hendrikse. “We make a simulation, and add the local conditions such as the volume of ice per year and the strength of the ice. We then enter the information about the structure to be built. This could be a lighthouse or an offshore platform, or of course a wind turbine. The simulation shows how the shifting ice and the structure interact with each other and which forces are at play. This information is then used in the final design process.”

The software model is now being used by commercial parties, in a total of six projects in the Baltic Sea, off the coasts of Germany and Denmark and on the IJsselmeer. The fact that it has come this far is thanks to the partnership with Siemens Gamesa. “They not only helped with the certification and validation process by an independent third party, but they also funded the follow-up research”, says Hendrikse. A win-win situation. “Siemens Gamesa has the product that it wanted, my model is being used in practice, and last but not least, I can get on with my follow-up research.”

The deal was only reached after lengthy negotiations. The Valorisation Centre (VC) played an invaluable part in the process, says Hendrikse (see interview Maxim Segeren). “My researcher's heart was saying: start using this model ASAP. But it soon became clear that we shouldn't just give everything away.”

Hendrikse is extremely grateful for the help he received during the negotiations, particularly when it came to intellectual property rights. “I hadn't really thought about this aspect, and it was great to work with people who know all about that side of things. It meant that I could really get maximal value out of my research.”

The follow-up study is now underway. Hendrikse and his team want to carry out tests using scale models. They are working with Siemens Gamesa and with Aalto University, which has access to a huge ice tank. The project is being co-funded by TKI Wind op Zee. TU Delft's Faculty of Civil Engineering and Geosciences is building climate chambers: two enormous walk-in freezers in which Hendrikse will also carry out tests. “We want to understand the difference between the effects of freshwater ice and seawater ice on the structures.” All of the research until now has focused on seawater. 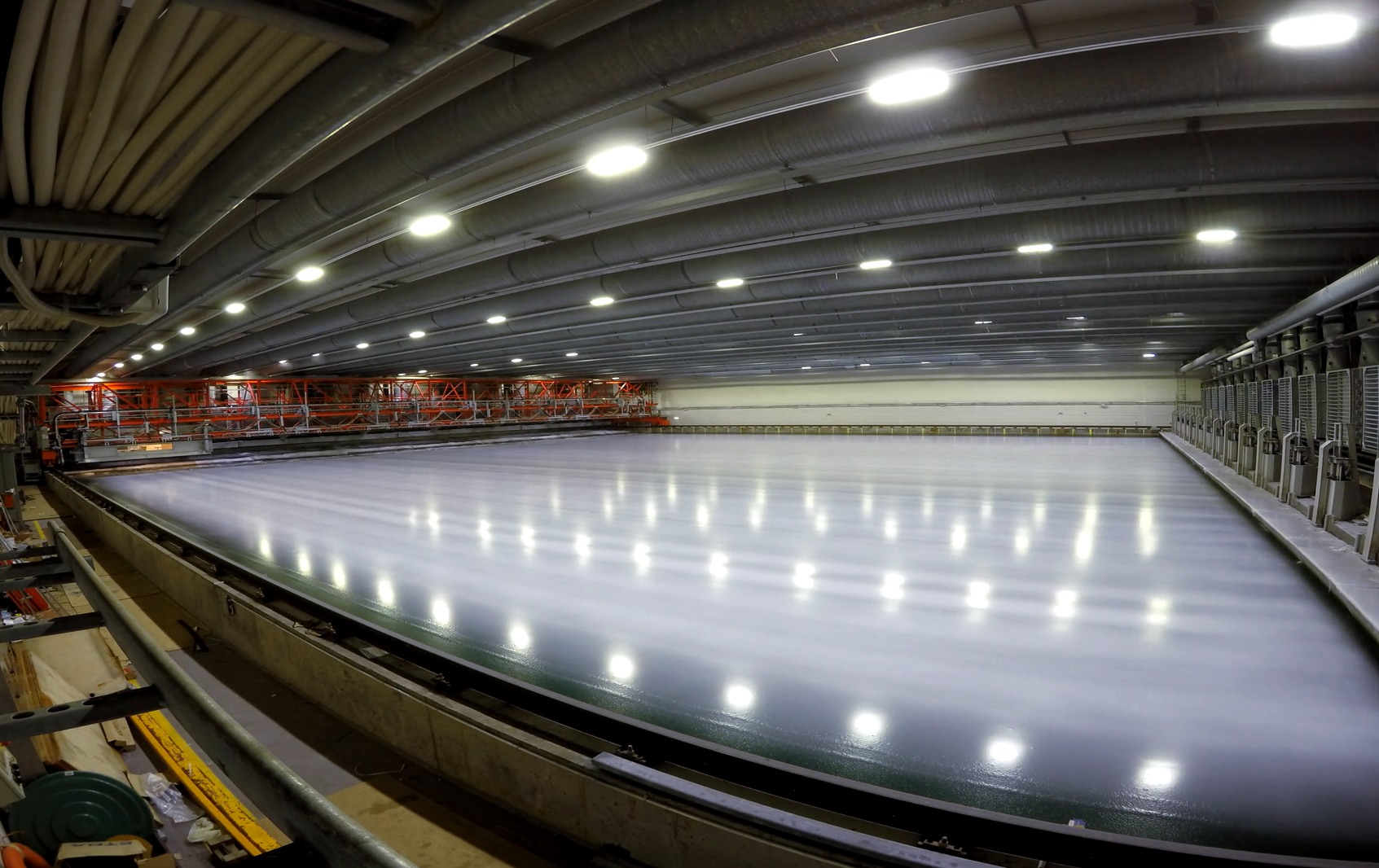 The Aalto Ice Tank where the next phase of experiments will take place, courtesy of Aalto University

It just isn't possible to test this on existing wind turbines, like those in the IJsselmeer, for example. “You can install all the measuring instruments, but it could take years before the lake freezes.” He is also working on ‘mitigating measures’, such as a film covering the turbines, to ensure that the ice breaks in a way that stops the frequency from coinciding with that of the turbine.

The model is fully open access, but the method developed with Siemens Gamesa for designing offshore-wind turbines on the basis of this model is not freely available. Hendrikse owns the copyright and Siemens Gamesa obviously has the right to use it. Other parties may implement the model into their software on the basis of the academic literature, and develop their own method for applying it.

In practice, most of these parties ask TU Delft to do this for them. Holding on to the method for applying the model was a conscious decision. Some people think that this contravenes the concept of ‘open science’, but in this case, it was the only way to create an impact, says Hendrikse.

“This move meant that I could expand my research with a lab, I can experiment, and I can appoint three PhD students to spend the next 4.5 years helping me with the project”, concludes Hendrikse. “It's a fantastic result. We've actively contributed to the design process for some of the offshore wind farms currently being built. How cool is that!”

Maxim Segeren is a business developer in the Valorisation Centre and supervised the deal with Siemens Gamesa.

“It was never our aim to make money with the intellectual property rights, but to implement the innovations and continue the research. I am very pleased that the negotiations resulted in a partnership with Siemens Gamesa: the company is footing the bill for the certification and for Hendrikse's follow-up research, in exchange for a royalty-free licence. In turn, this gave TU Delft the opportunity to link up with public-private funds, which we have done with success.

This has enabled us to make a real impact. We moved directly from a research model to implementation and certification in a commercial project. In addition, the fundamental research is continuing. This is something that the Valorisation Centre and the Faculty of Civil Engineering and Geosciences can be proud of.

It was a complex process, in which we worked closely with Adriaan van Noord and Merlijn Bazuine from the Intellectual Property (IP) team. Merlijn had a highly constructive, adequate approach to dealing with all the agreements relating to IP. I could never have done it on my own.

“Hayo focused on the content, and my role was to keep all the players on board, iron out any obstacles and ensure the smooth running of the partnership. That sounds easier than it is. There are so many different people involved, both from within TU Delft and from outside: grant providers and Siemens Gamesa.

“What Hayo has done is nothing less than a global breakthrough. The models used to measure dynamic ice force up until now dated from the 1970s, and the last major progress was made in the late 1990s. That's over 20 years ago. Hayo's method means that some commercial offshore projects are now financially feasible in areas where the ice conditions previously made them impossible. A fantastic result! Our task as Valorisation Centre is to help researchers to implement the innovations generated by their research in society. This is a prime example.” 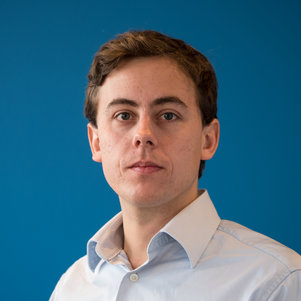 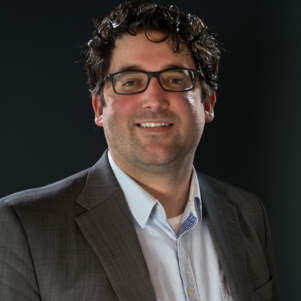