A 7 metre tall pink origami rabbit has hopped its way over to the Grote Markt, making Delft’s living room its temporary hutch from May 30. The animal was designed with the Delft Fringe Festival in mind by two TU Delft computer science students. ‘We were positively shocked when we heard that we, two computer science students, had come up with the winner,’  Bartek Kotlicki from Poland and Irishman Ben Provan-Bessell said.

‘I have always been interested in origami,’ Ben says. ‘When Bartek and I were brainstorming about the design brief I started folding a couple of animals from paper. One of them was a rabbit and as we were looking at it we thought we might turn it into a cash register. That’s how the idea was born.’

The rabbit eventually turned from cash register into the main pavilion at the Delft Fringe Festival, extremely pink and as tall as the statue of Hugo de Groot. 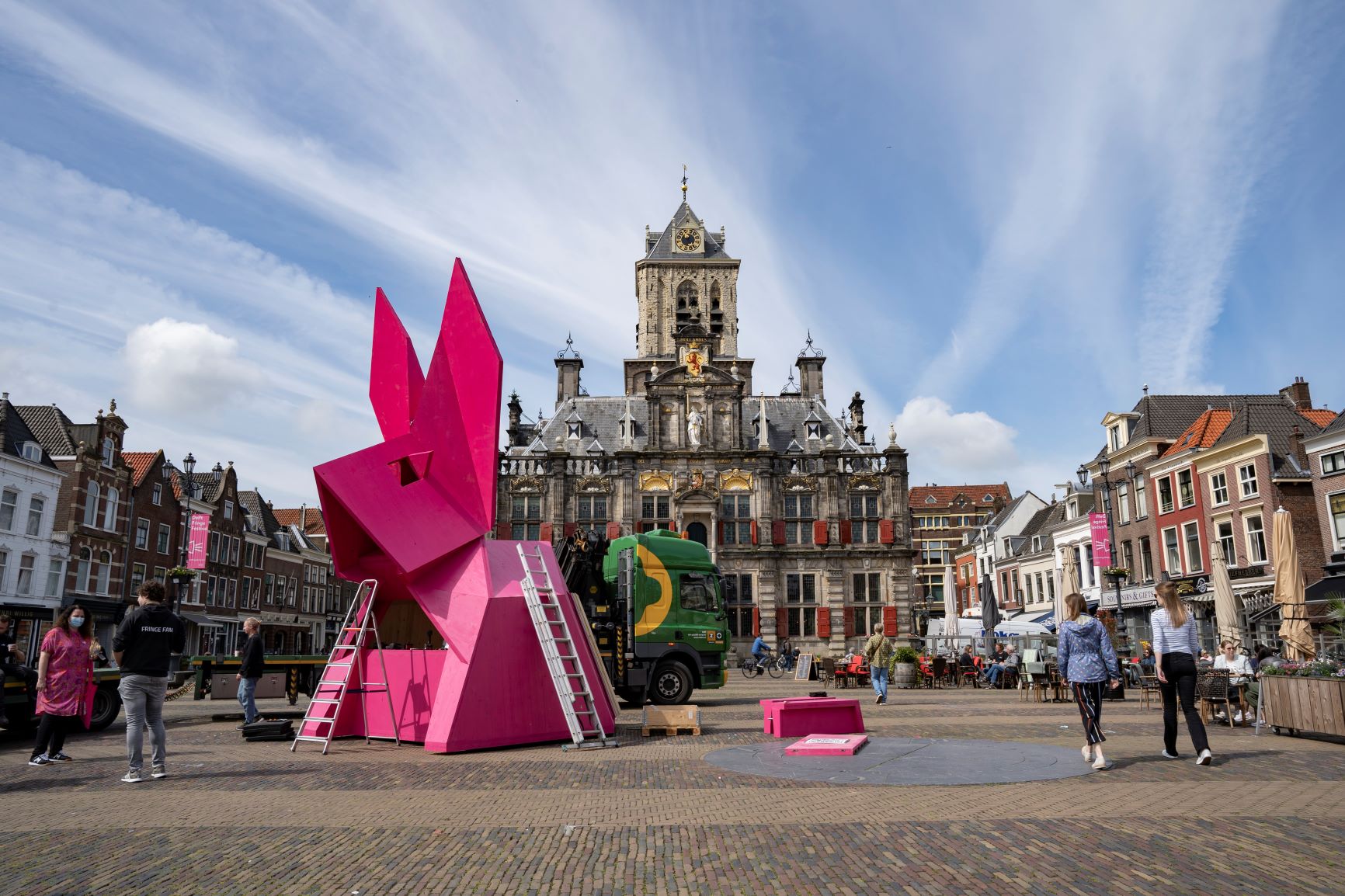 From computers to architecture

Normal procedures having taken a backseat in times of Corona, Bartek and Ben, not feeling it was up to them to be consistent either, decided it would be a good idea to ditch computer science for a while and take up engineering for a couple of months. ‘I was sorting out my minor when I came across a picture of someone making a chair. I immediately thought ‘that looks great, that’s for me’, Ben says.

‘It also gave us an opportunity to be much more creative. That clinched it for me,’ Bartek adds.

It was for the festival

Designing and building, like the chair Ben saw in the photograph, is what the engineering minor is all about. Students are given design briefs which challenge and extend their architectural knowledge and skills. It wasn’t until half way through the minor that they learned that the subject of their final brief was a design for the Delft Fringe Festival.

‘It was a real opportunity to learn something completely different. We can draw a bit but we don’t have any architectural skills. But we were expected to design a house anyway,’ Ben says. ‘The first few weeks were a very steep learning curve but our teachers were a tremendous help.’

‘The big difference with the computer science faculty is that there are over 400 of us in a crowded hall, with one lecturer who is a speck in the distance. Here the group consisted of about 30 people and not one but five lecturers,’ Bartek says. ‘And because the group was so small they not only asked us how our project was doing but how we were doing as well. That was a very positive and personal experience.’ 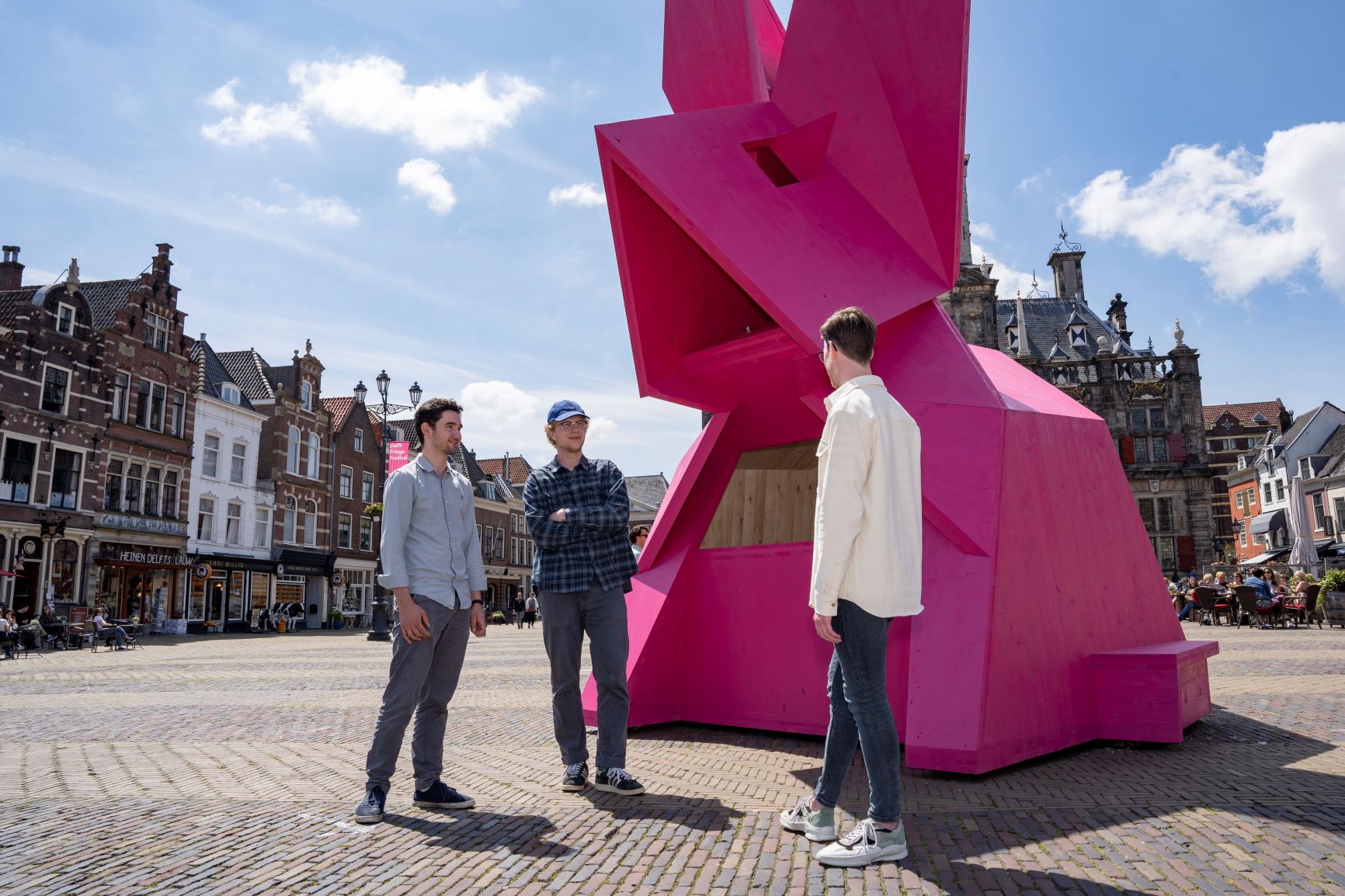 An open mind and, first and foremost, having fun

Half of the students taking up the minor were engineering students. The other half was made up of students from a variety of  different TU Delft faculties. ‘We may have lacked the technical skills of the engineering students but that was precisely what enabled us to look at the brief with an open mind,’ Ben says. ‘And, most of all, we tried to have fun with the idea.’

‘And it was good fun to get into the mindset of architects for six months. Now we have a better idea of how they’re thinking and how they approach problems.’

The organisation of the Delft Fringe Festival certainly thought they had learned what makes architects tick and promptly declared them the winners, praising their design for its playfulness and instant recognisability. The decision to do something different for a bit certainly worked out well for the boys because their design will be a feature at the very heart of Delft for a whole week.

Apart from the rabbit, the original design by Bartek and Ben included other animals well. ‘We went  on to experiment with other animals for the different functions of the pavilion. A duck spreading its wings became the podium, surrounded by crane shaped chairs. Butterfly parasols would mark the meeting places in the city,’ Bartek explains.

But for now the festival, money-strapped because of corona, will have to make do with the giant rabbit. But the boys are still hoping their rabbit will be joined by the other animals one day.

‘They were designed to form a family which can be put in various places so people can see they belong together,’ Bartek says.

Once they have finished their bachelor’s degree the boys will probably be leaving Delft to go back to Poland and Ireland. But should the organisers of the festival decide they want include more members of the animal family they will be back in a hop, a skip and a jump. 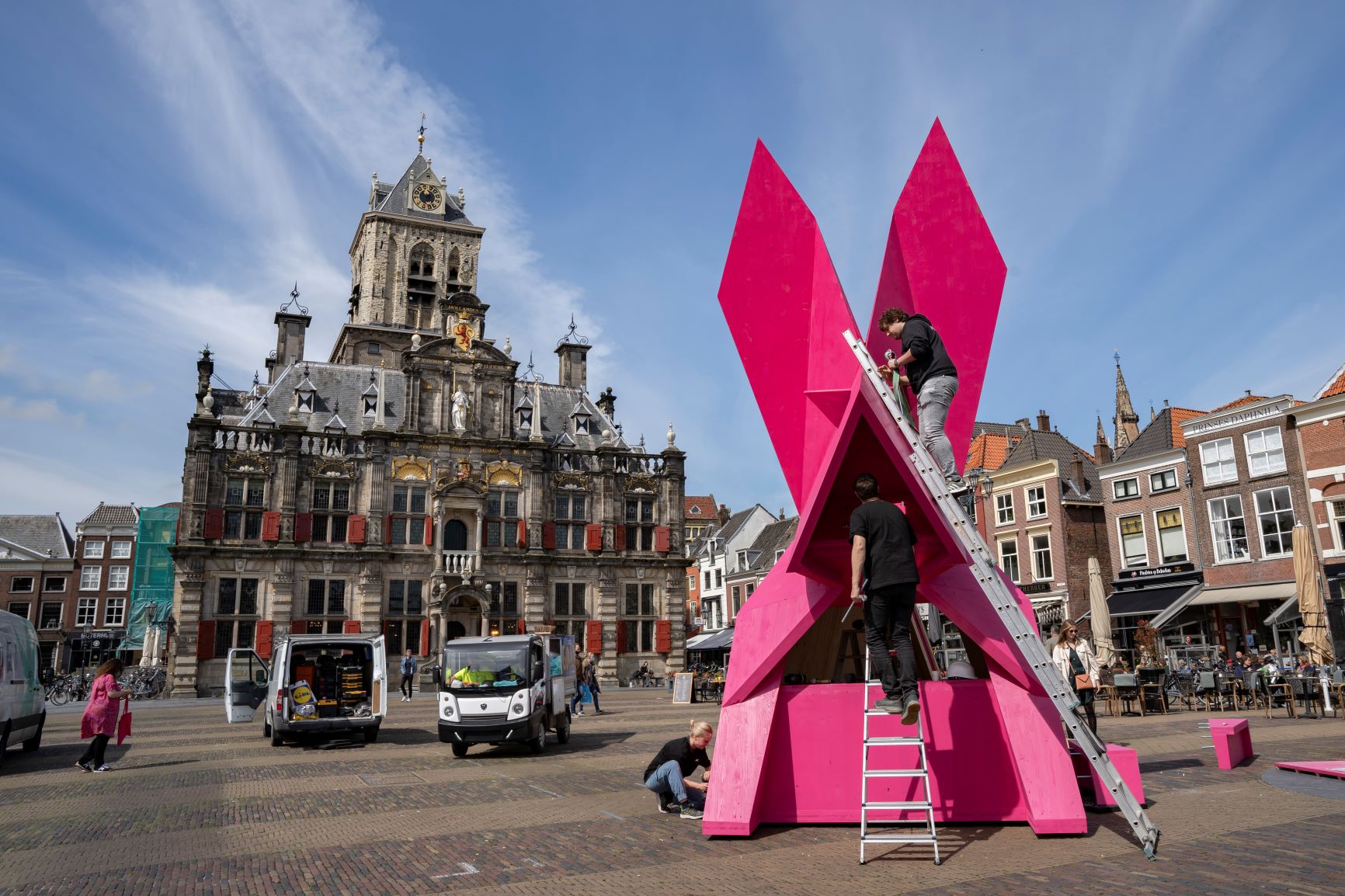