The first scale model test proved last year that the Flying-V is an airworthy, stable and controllable aircraft. In early November, it was time for the next step: the first simulator flight. Test pilot Thibaut Cappuyns had the honour of taking control of the stick of the SIMONA simulator. The pilot's experience of this revolutionary type of aircraft is crucial.

For a year and a half, Cappuyns waited in suspense for an invitation to make a simulator flight with the Flying-V. When he was finally informed that he could start the tests, he was over the moon. “After graduating in late 2019, I maintained regular contact with people from TU Delft. I made it clear that I would jump into my car and drive up from Belgium as soon as they started testing the aircraft. I thought it would be so cool to fly a non-conventional aircraft. I have some experience with piloting helicopters, but a model with flying wings, like the Flying-V, is a new ball game. I was really excited about what I would see and experience from the cockpit.”

Testing with a simulator

Cappuyns built an aerodynamic model of the Flying-V for his thesis – a model that Control & Simulation student Gijs Vugts used to develop the simulator flight. Vugts: “I incorporated the forces, speeds and rotations of the aircraft into the simulation that the pilot experiences under normal conditions. As it was a first test, it was a completely isolated simulation flight. Take-off, landing and situations such as extreme weather conditions or engine failure will be tested at a later point in time. Ultimately, the results of all the simulations together constitute the basis for a control system that we use to create the automatic pilot.” 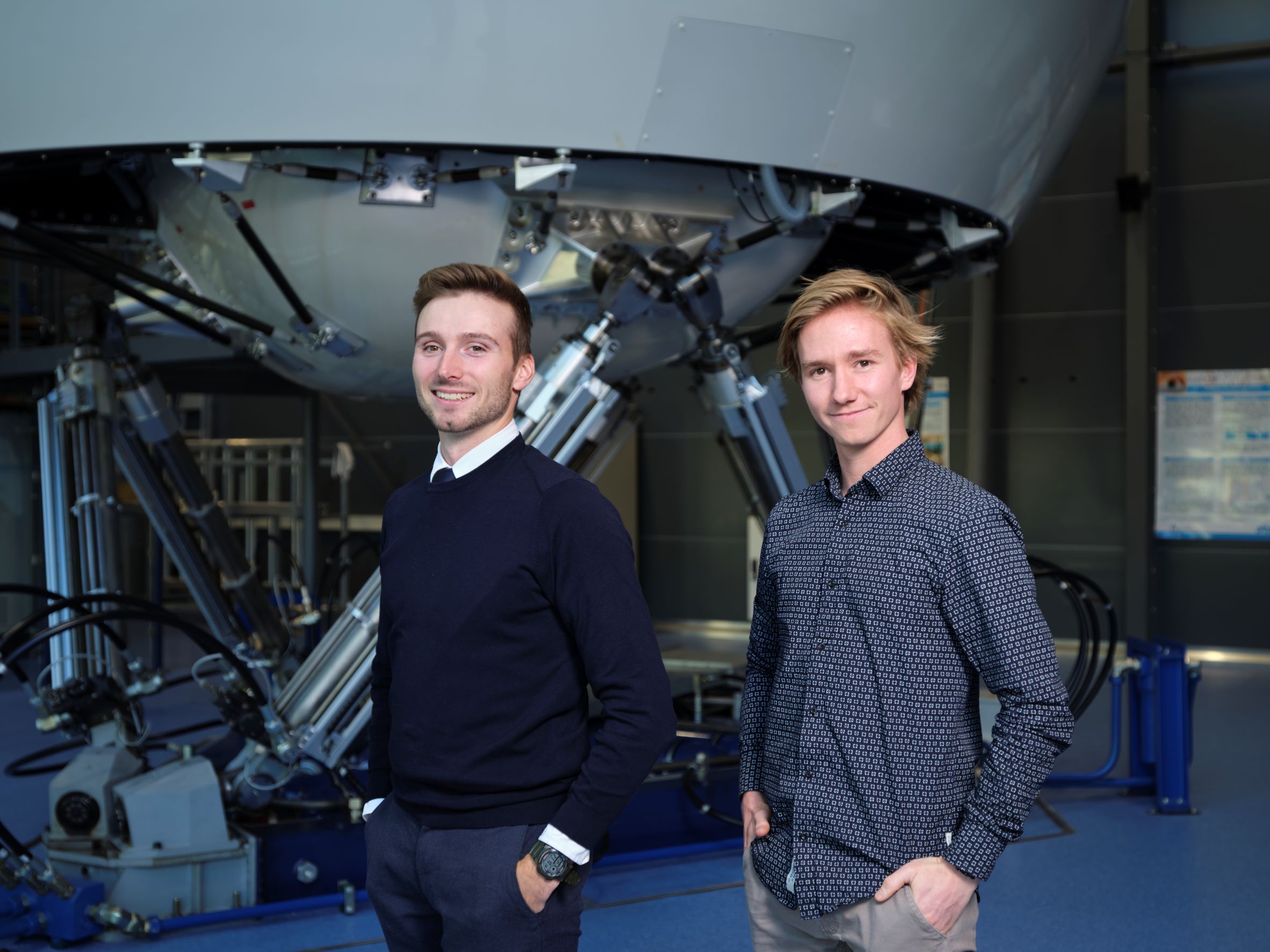 A simulator flight shows how a pilot experiences issues he may encounter during a flight, Vugts explains. He divided the test into two configurations. “In the first configuration, we piloted the Flying-V as a conventional aircraft. We observed a small dip in the aircraft's response. In other words, the aircraft first descends a little before generating sufficient capacity to ascend. This is because the point of rotation of the Flying-V is located further to the back than in the case of a regular aircraft. To make the same rotation, you have to produce twice as much power. That entails several side effects, including the short downward dive when you want to ascend. Such a dip did not occur in the second configuration.”

Vugts did not convey all the information about the tests because he didn't want to give the pilot too much prior knowledge. Cappuyns: “The test would perhaps be compromised somewhat if I handled the controls with any kind of bias. I was therefore given rather vague or incomplete answers to the questions I asked prior to the flight based on the briefing – for example, about the precise object of the configurations. I didn't hear about the intentions and differences between the two runs until after the tests, and I only had a brief look at my thesis in advance. It was important that my theoretical background would not distract me from my experiences during the tests.”

Looking in from the control room

Vugts: “Cameras in the simulator enabled me to see exactly what Thibaut was seeing and doing, and how he reacted. Meanwhile, I was taking notes and asking questions about his experiences, which were expressed in ratings. The scores show whether he finds something pleasant or different or even unpleasant.” 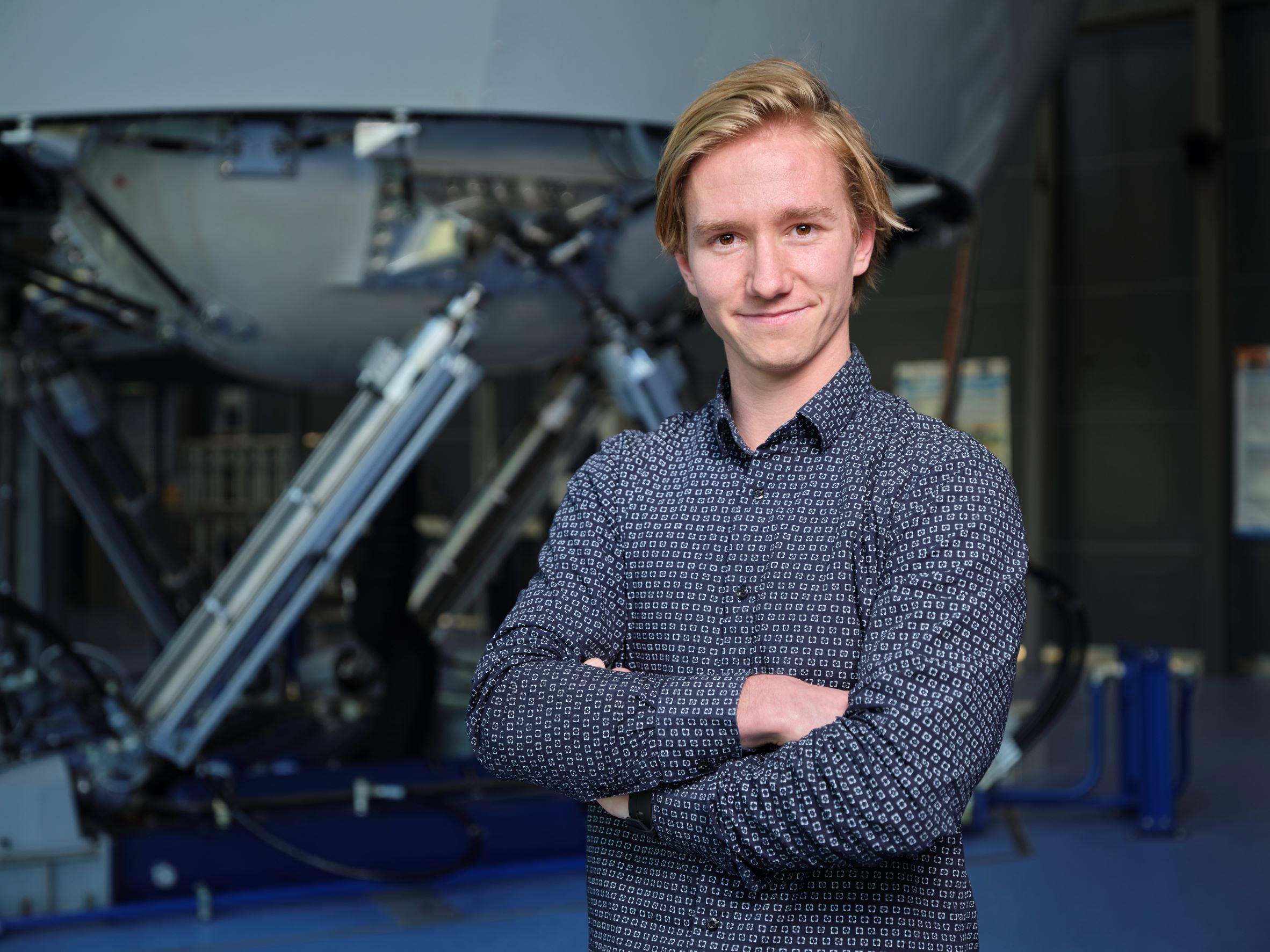 Cappuyns: “Everything went really smoothly at first, and it was as if we were dealing with a regular aircraft. Accordingly, the scores were very high. But differences then started appearing, particularly regarding slowness. And the dip before the ascent was unwelcome, and it meant that I had to make several corrections.”

Differences with a regular aircraft

Cappuyns’ experiences of the tests coincided largely with his prior expectations. “Only I had expected the differences between this and a conventional aircraft to be more distinct. But I may not have experienced those things fully because I was compensating a lot.” Vugts agrees. “When you are concentrating on adjustments, you are not aware of exactly what you are experiencing. But it was clear from the control room when the aircraft was either ascending or descending very noticeably. So to get a complete picture, we need to combine the pilot's experiences with what we see from the control room.”

As a pilot, Cappuyns thinks the new type of aircraft holds great promise for the future. “Today's test showed that any trained pilot can fly the Flying-V under normal conditions. The issues we came up against can easily be solved. So we are now waiting for the first real wall, the point at which a problem occurs that is difficult to solve. The fact that such a problem has not yet been found means that the Flying-V is very promising.” According to Vugts, some challenges can be expected regarding the simulations, particularly due to the limitations of the simulator. “These limitations mainly concern the angles the simulator is capable of. Particularly when landing, you need a larger viewing angle than with a conventional aircraft.”

Cappuyns cannot wait to actually sit in the cockpit of the Flying-V. “I have always been fascinated by new types of aircraft. My father and my uncle built a plane, and I used to be a great fan of Burt Rutan, the founder of Scaled Composites. That was a company that was known for its extreme aircraft models, which would be the first to fly around the world without refuelling, and which established all kinds of altitude records. They inspired me to choose Aerospace Engineering.

During my graduation presentation, I vowed to come back some day as the first pilot of the Flying-V. It feels as if we are almost full circle, at least partly, now that I have been able to complete the first simulation test. 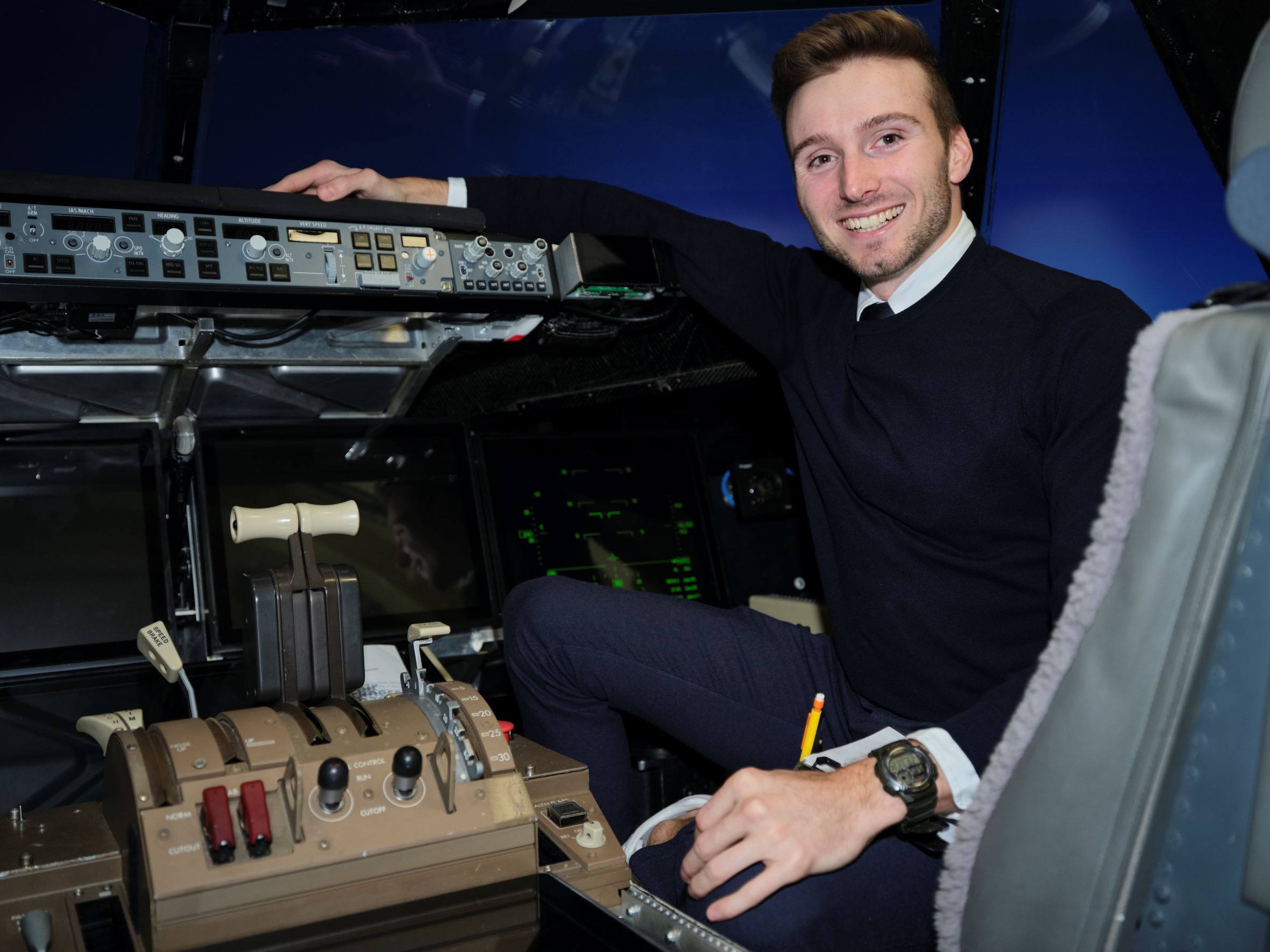 “We have to close the knowledge gap on ventilation now”

Learning to lead as a young woman in aviation