Small respiratory droplets in the air play a role in the spread of the coronavirus, making good ventilation vital. In her SenseLab, Professor Philomena Bluyssen is conducting research into aerosols in the indoor environment and how we can best defend ourselves against them.

One of the test chambers in the SenseLab has been set up as a classroom in the 1.5-metre society, with widely spaced desks. A screen at the front of the classroom shows images of a head surrounded by tiny particles. The head belongs to Professor of the Indoor Environment Philomena Bluyssen, who is leading the research on the coronavirus and ventilation. Sitting at one of the desks, she is her own test subject, not because there is any risk in the experiment itself – which uses harmless soap bubbles – but more because of the social distancing rules that apply even in the lab.

Social distancing, together with handwashing, is one of the pillars in the fight against the spread of the coronavirus. The WHO and the RIVM (the National Institute for Public Health and the Environment) operate from the premise that the virus is spread in two ways: via saliva droplets exhaled by infected persons through coughing and sneezing and via hand contact with infected surfaces. However, Professor Bluyssen, along with many other scientists, is convinced that there is an important third source of infection: via microscopic saliva droplets, aerosols, which can remain airborne for a long time. “We know from previous research into the MERS and SARS viruses that aerosols play a role,” she explains. “And so long as we don’t know for certain that this doesn’t apply to COVID-19, the very least we can do is to keep the risk as low as possible.” 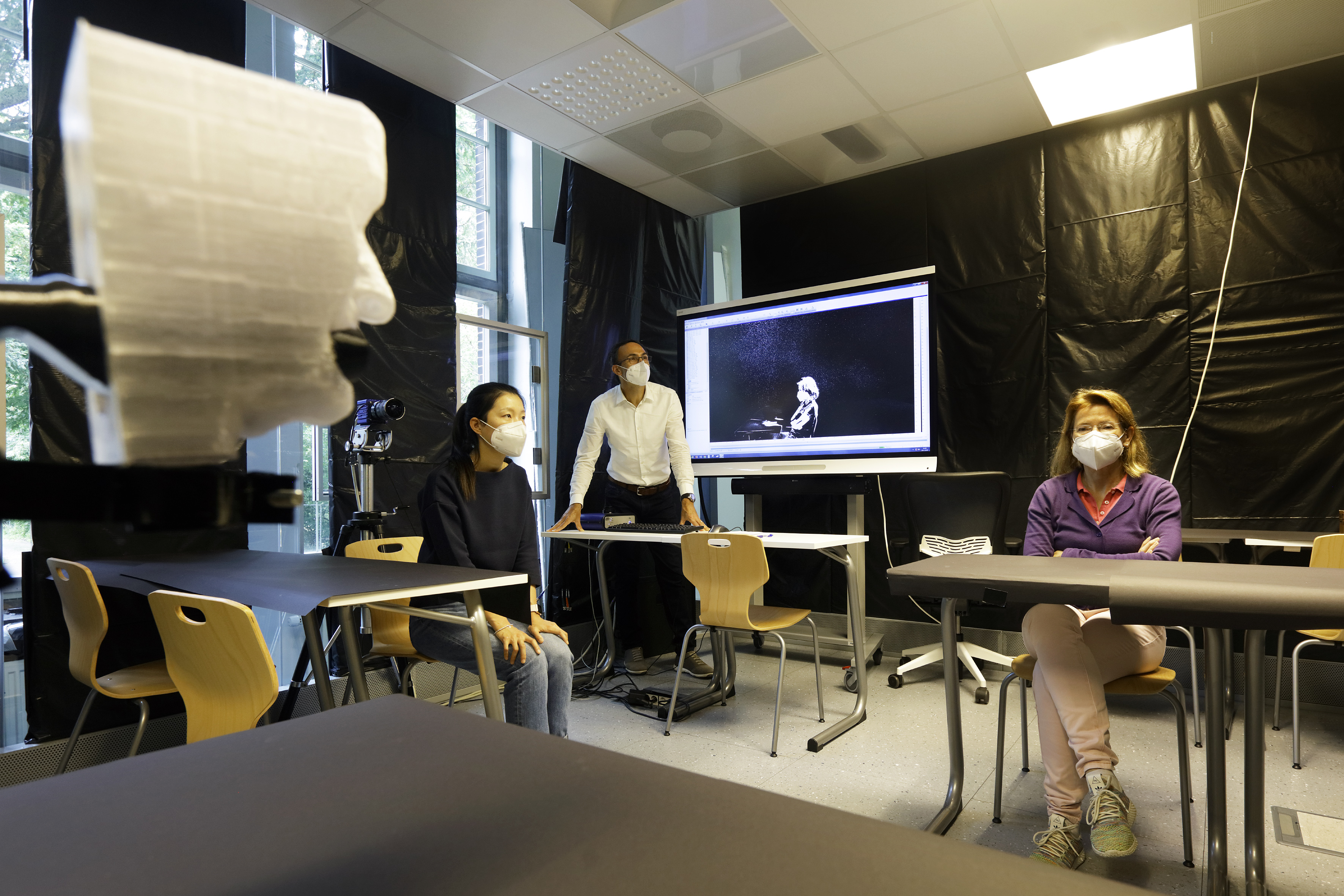 Back in April, Professor Bluyssen was already part of a group of 36 scientists from all over the world who were trying to convince the WHO of the risk of this third path of infection. She is also one of the 239 signatories of a second open letter to the WHO which was published on 4 July. However, the message seems to be taking a long time to sink in. What could be the reason for this blind spot? “On the one hand because the WHO, just like the Dutch Outbreak Management Team (OMT) is mainly composed of medical experts who examine situations such as intubations or operations in which virus particles are released; they understand the risks involved in this. But they are not physicists who understand how particles are transported, or engineers who have an affinity with ventilation systems,” explains Bluyssen. “And on the other hand, if the WHO acknowledges this risk, this has considerable consequences for countries that don’t have the resources to provide good ventilation.”

However, the tide is now turning in Europe. In late June, the European Centre for Disease Prevention and Control (ECDC) published a report recommending good ventilation in the indoor environment. Germany and Belgium are among the countries to act upon this report, but the RIVM and OMT in the Netherlands have proven very reluctant. “They maintain the view that our current ventilation guidelines as laid down in the Building Decree are sufficient. This shows that they have not thoroughly familiarised themselves with the material: the guidelines are minimum values based on CO2 concentrations exhaled by persons present, they have nothing to do with health measures.” And Bluyssen should know, as she has spent years studying the relationship between indoor air quality and health, including the risks of poor ventilation and the presence of toxins such as formaldehyde from paint and furnishings.

Since the outbreak of the coronavirus she has been concentrating on the spread of indoor aerosols and the measures that can be taken to minimise this. Within TU Delft she is collaborating on this with Professor Fulvio Scarano of the Faculty of Aerospace Engineering, and outside the university she is working with the previously mentioned group of 36 scientists and a group that calls itself Beyond 1.5m Science (Christophe Hermans from NLR/DNW, Henk Jan Holterman from Wageningen University & Research, Paul Scheepers from the Radboud UMC and Atze Boerstra from bba binnenmilieu). With her research she wants to demonstrate how this spread takes place and so convince the sceptics to take action. “When we started it was still very controversial to talk about airborne transmission. We were expected to keep quiet about this, because it was not at all supported by the OMT and the RIVM,” she explains. Now a few months later she has already succeeded in part of her mission: the images from her experiment in the SenseLab show clearly how aerosols in the air we breathe out can travel much further than 1.5 metres.

The instruments needed for the experiment were purchased thanks to a donation from the TU Delft COVID-19 Response Fund. To use the equipment Bluyssen sought the aid of Professor of Aerodynamics Fulvio Scarano among others. Scarano developed a technique for visibly demonstrating air movement in wind tunnels using soap bubbles.
Behind the screens of the test classroom, Bluyssen shows the equipment used for her research: in addition to a soap bubble generator from the wind tunnel, she is using one of the ventilators developed in the Faculty of 3mE. Air and bubbles are introduced in the test classroom together and ‘exhaled’ via the head of a test dummy. Special lighting against the black walls of the test classroom shows up the ‘exhaled’ particles. These are then recorded by a camera filming at a speed of 1000 images per minute.

During the experiment the particle flows are shown over time and using different forms of ventilation: high and low-rate ventilation, mixing and displacement ventilation, open windows and no ventilation at all. “We studied the effect of the ventilation on the density of the particles over the course of time. If you use no ventilation whatsoever, we see that the particles continue to accumulate. So if you are sitting with an infected person in a poorly ventilated room, at a certain point you will probably be exposed to a sufficient concentration of virus particles as to form a risk of infection,” says Bluyssen.

The way in which you ventilate a room may also play a role: “We are now studying precisely how these air flows travel, because if the air in an enclosed space travels past other infected people during the ventilation process, you are back to square one. So you need to pay attention to how you extract the air.” This means of infection was in any case shown for the eight people sitting at adjacent tables in a restaurant in Guangzhou in January. So the use of fans in a room occupied by several people can in fact spread contaminated air, which is something the RIVM did warn against during the hot weather at the end of June.

In mixing ventilation, fresh air is delivered via the ceiling and extracted elsewhere in the room. In displacement ventilation, the fresh air is delivered near floor level, warmed by the body heat of the people present in the room and then extracted near ceiling level. As yet Bluyssen cannot say which is the best form of ventilation. “In principle displacement ventilation is better, but if water molecules from the heavier droplets evaporate, they may remain suspended in the air and thus be inhaled by a following person. Then mixing ventilation using the correct air flows would work well. This is something we want to investigate further.”

Bluyssen and her colleagues have already made a number of recommendations, such as those in this study. Ideally they would like their recommendations to take into account how much living virus an aerosol can contain. A grant application has been submitted for such a study in collaboration with an epidemiologist and a virologist, among others. “Up to know it has been difficult to prove the presence of coronavirus in aerosols because by the time you are called in as a researcher, you can no longer take air measurements,” explains Bluyssen. “But particles that have not been extracted will eventually settle somewhere. So we would like to take measurements in schools at places that have remained untouched, for example on the top of cabinets.”

In anticipation of this, she will first be studying in the SenseLab where exactly aerosols settle under different circumstances. “We will colour water vapour with fluorescent dye so that we can render the particles visible with UV light. Then we will experiment making different sized droplets and adding a kind of slime to replicate saliva, in order to see how droplets move and where they eventually settle.” This same method was recently used to carry out tests on the leakage of face masks.

Even though her regular research has been put on hold for the moment, this period has had positive aspects. “Fortunately I was able to do more than just sit at home keeping the running experiments going,” says Bluyssen. “The media attention also made my research more widely known and the new collaborations that ensued have proved very inspiring.” Soon she will be able to get back down to developing a new research model for understanding the indoor environment in various settings, such as schools, offices and dwellings, and the effects on their occupants. Even in the post-corona era there are plenty of challenges remaining. 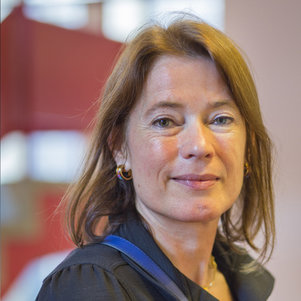 The effect of a mobile HEPA filter system on ‘infectious’ aerosols, sound and air velocity in the SenseLab