Concrete has been one of the most widely used construction materials in the world for decades. Despite this, concrete rubble is recycled in only very small amounts worldwide even though sand and gravel are becoming increasingly scarce and their exploitation is damaging to nature. As part of a European research project, students and staff from the Faculty of Architecture and the Built Environment have come up with a range of ideas on what you can make using recycled concrete. From permeable paving to street furniture that can generate energy: concrete rubble has real potential.

Henri van Bennekom is a lecturer and researcher in the Faculty’s Architecture department. On behalf of TU Delft, he has been running the European research project Secondary Raw Materials for Concrete Precast Products (SeRaMCo) with several colleagues since 2017. As he explains, the project is largely motivated by increasing shortages. After all, even the ingredients of an everyday construction material like concrete will run out eventually. “Take sand, for example, it’s in demand worldwide. In India, demand for sand currently exceeds supply by a factor of three. A veritable sand mafia has developed that is exploiting the sand, even in vulnerable nature reserves, and shipping it to countries like India and Indonesia.” In the Netherlands, the ongoing ‘hunger for sand’ means that it is continually being removed from the sea and rivers. “This is disrupting the natural sand balance.” As well as a construction material, sand is also used to raise the level of roads and for drainage. For coastal maintenance, increasingly large amounts of sand from the seabed are needed. “The gravel and crushed stone that is processed into aggregate in concrete originally comes from the natural environment. However, for aggregate from concrete rubble, there is no need to destroy rocks. That makes it a sustainable alternative.”

In other words, there are plenty of good reasons for recovering the raw materials from concrete and reusing them. But how does it work? What is the quality like? Who will buy the secondary materials? And what potential applications are there? As part of the SeRaMCo project, a consortium of knowledge institutions and companies from the Benelux countries, France and Germany looked for potential answers to these questions. Researchers from various universities developed different formulas, which were tested by specialists in prefab products. TU Delft was asked to come up with ten innovative products. “We managed it,” reports Van Bennekom, now that the project is almost complete. “It appears that materials made from recycled concrete are of the same quality as the original materials. Of course, that’s good news, but reusing it in standard elements and structures is not innovative in itself. That’s why we tried to find alternative ways of enabling concrete applications to make a contribution to a sustainable built environment worldwide.”

In the Faculty of Architecture and the Built Environment, Van Bennekom is responsible for the ‘Making’ course, in which Master’s students learn to work with concrete. “They experiment with different concrete mixes and make formwork.” For SeRaMCo, Henri worked with students and colleagues in the faculty on the development of a concrete element made with salt water for use in coastal defences and dyke reinforcements. “We need to be sparing in our use of fresh water, the source for drinking and irrigation water. Despite that, global production of concrete consumes huge quantities of fresh water.” He calculates that everyday consumption is equal to two litres per day for all seven billion world citizens. “That means that concrete made using salt water places much less strain on global water supplies.” Since salt water cannot be combined with metal reinforcement, this form of recycling can only be used on unreinforced concrete. The ten products also include various designs for permeable paving. Streets and squares with water-permeable paving can make an important contribution to a more climate-proof built environment because acute flooding is prevented and rainwater – sorely needed in times of drought – does not drain away but is stored in the ground.

Another of his team’s discoveries that appeals to the imagination is a noise barrier made from recycled concrete that generates thermal energy. “Water flows through kilometre-long hoses built into the concrete and is heated up via the concrete in the summer. In the winter, it provides heating for the village behind the noise barrier by means of underground thermal storage.” The idea for street furniture that generates energy is equally ambitious. Henri’s team designed and built a concrete bench that generates power. “We’re actually taking advantage of the thermal properties of the different materials. Heavy, stone-like materials, for example, heat up much less quickly than metals, but once heated, they retain that heat for longer. For the concrete noise barrier, we really took advantage of that property. For the bench, it’s the difference in temperature between the materials that we’re using.” 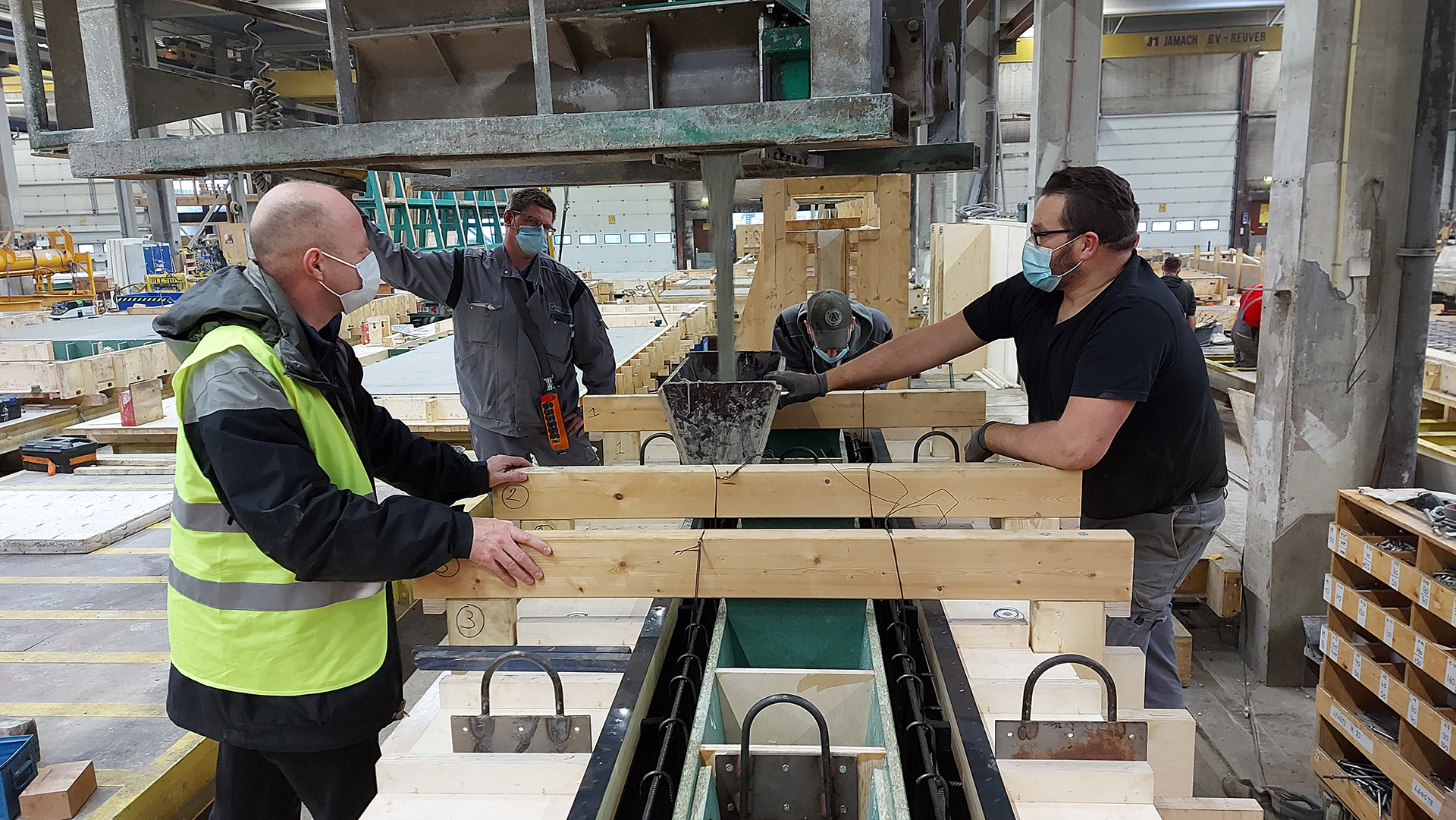 The bench is equipped with metal plates that heat up incredibly fast in the morning sunshine compared to the concrete that has cooled overnight. The stronger the sunshine, the hotter the metal becomes. “So-called Peltier modules convert the difference between the heat of the metal and cold of the concrete into electricity. We tested this effect and incorporated it into a beautifully designed piece of street furniture, four metres in length.” Thanks to LED lights, the bench actually illuminates itself, using its own power, explains Van Bennekom. “Any surplus power generated in the summer is sent to a battery. We hope that it will produce enough power to charge a mobile phone.” Two benches will be ready for use in the spring of 2021. Van Bennekom hopes to see one of them in a prominent position in Delft. “On the university campus. Or, even better, in a central location like the market or in front of the central station entrance, as a visible and usable symbol of Delft, city of knowledge. That would be amazing.” 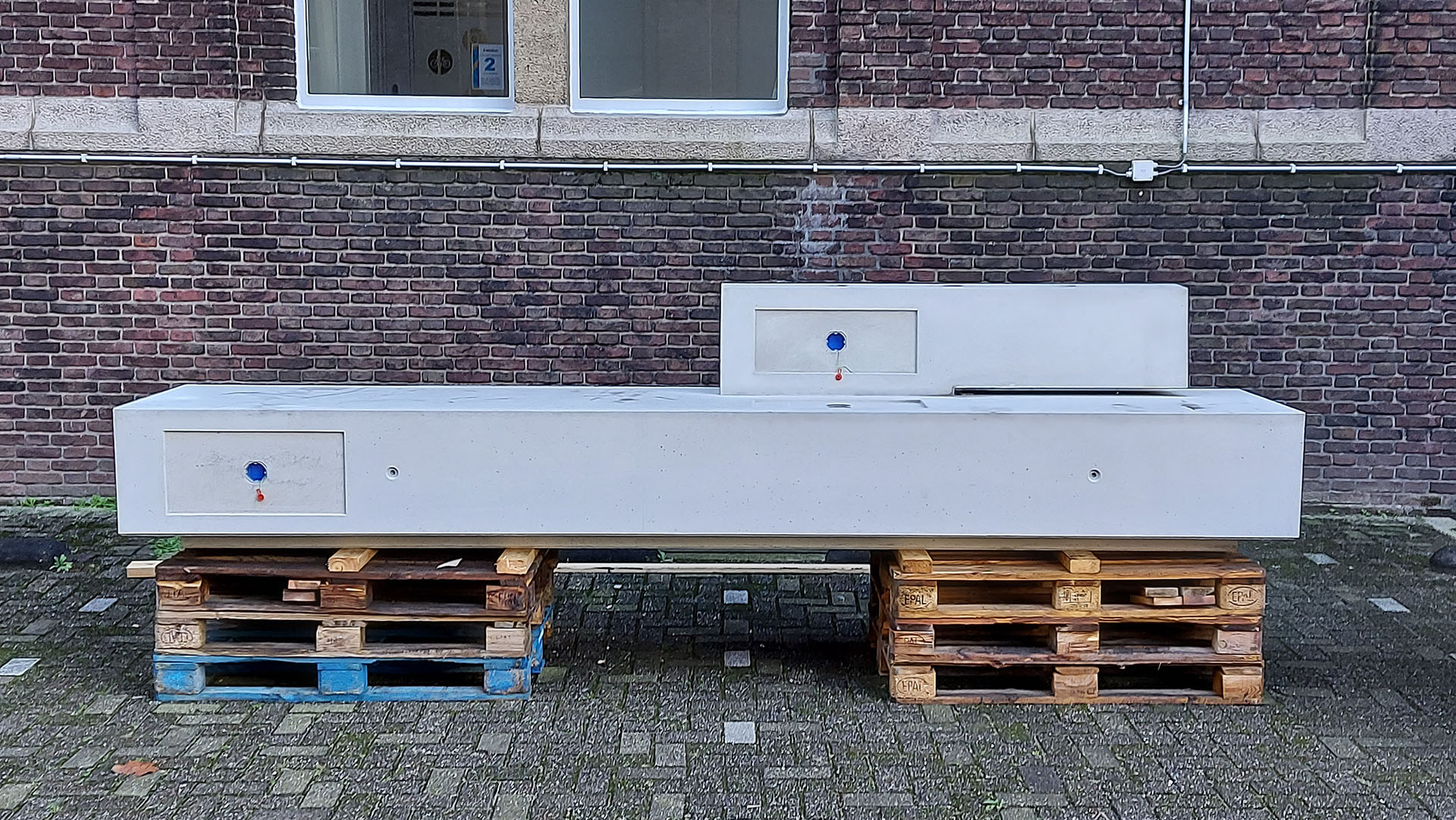 In order to enable everyone to experience for themselves how useful the recycled material is and what great properties it has, the project partners have put three other Delft designs into practice in pilot projects. Close to the French town of Thionville, just across the border with Luxembourg, there is now an attractive concrete retaining wall that reads ‘Thionville- Porte de France’. “The object demonstrates the material’s expressive potential and what an attractive finish it can have.” Near Kaiserslautern, in the city of Pirmasens, at the university campus of ‘The Hochschule Kaiserslautern’, there is now a pavilion with a floor, panels, roof and seating made from recycled materials. “It’s a sheltered place in a park-like setting where students and staff can reflect.” Seraing, close to Liège, will be welcoming a special new course for street runners sometime this year. “We devised a whole series of concrete elements that together form twenty objects. They invite people to engage in all kinds of exercise. It’s really quite a challenging course and I think that street gymnasts will just love it.”

As Van Bennekom stresses, one of the benefits of this project that should not be underestimated is the fact that it has provided scientific proof that reluctance to use materials made from recycled concrete is misplaced. “Durability tests etc. have made it clear that this material meets the normal standards and requirements. The recycling of concrete, stone and ceramic construction materials is gradually becoming standard practice in the Netherlands and Germany, but there is still a lot of progress to be made in other European countries. The same applies elsewhere in the world. But there’s actually more construction going on than demolition. Recycled materials will only meet some of that demand.”

In the meantime, there is now serious interest in the bench. “Geelen Beton, the company that is sponsoring the prototype, is interested in manufacturing some of them. Orders have already been placed.” According to Van Bennekom, the additional costs involved in transporting, sorting, cleaning and grinding demolition waste compared to traditional concrete production will be reduced as industry gradually finds smarter ways of working. One example of that is to organise activities locally, even on site. “The question is whether the extra two or three euros that a cubic metre of recycled material costs is not actually worth twice or three times as much in view of the preservation of the natural environment achieved and the value that this represents. This was already answered, back in 1972, in the Club of Rome report The Limits to Growth. Our linear economy and underlying growth models are actually long past their sell-by date.” 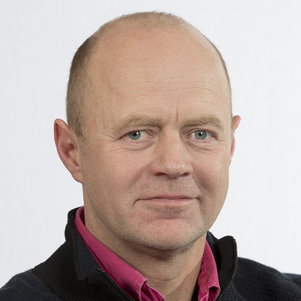