Dr. Roelof Vos, researcher Flight Performance and Propulsion and project leader of the Flying-V, explains the technology behind the innovative aeroplane:

Vos: "The Flying-V is a long-haul aircraft where the passenger cabin, the cargo hold and the fuel are all located in the wing. We've designed an oval pressurized cabin that allows for an efficient structural design, with sufficient design freedom to allow for proper aerodynamic shaping. Our preliminary calculations have shown that the aircraft has significantly less drag than a modern widebody aircraft, such as the Airbus A350 or the Boeing 787. Structural calculations have shown that also the structural weight is significantly lower. Based on those studies we've estimated that the Flying-V consumes 20% less fuel than an Airbus A350 for the same flight."

"The Flying-V does not have a separate horizontal tail plane. It is therefore stabilized by the location of the wing’s aerodynamic center, which is behind the most aft center-of-gravity. Pitch and roll control is provided by the segmented elevons at the trailing edge of the outboard wing. Yaw control is provided by the rudders, which are integrated in the winglets. The large sweep angle and low aspect ratio of the aircraft imply that a relatively large inclination angle is required to attain enough lift during low-speed conditions. In other words, the aircraft comes in for landing with its nose raised fairly high, just like the Concorde did. Therefore, the undercarriage consists of relatively long landing gear legs, that require an additional hinge point to be stowed efficiently. This is similar to other tailless aircraft such as the Concorde or Convair’s B-58."

"The engines of the Flying-V are positioned above and behind the wing such that the engine intake is still above the trailing-edge of the wing. The location results from considerations on inter-engine clearance, center-of-gravity, one-engine-out yawing moment, and aerodynamic interaction with the wing. The engine is located behind the passenger cabin, reducing the cabin noise. Furthermore, community noise is reduced due to two factors: the fan noise is partially shielded by the wing and the exhaust noise no longer reflects from the lower surface of the wing. Engines can be serviced by positioning scaffolding in between the two engines. The engines are positioned within nacelles, which are mounted on pylons. The pylon connects to the same structure as the landing gear to ensure structural synergy and lower weight."

"The aircraft does not feature any high-lift devices, which means less moving parts, less part count and a reduction in maintenance cost. The wing area is roughly two times larger than the wing area of an Airbus A350, which allows the aircraft to meet the approach-speed requirement of a 140kts. The high lift-to-drag ratio of the aircraft requires large speed brakes to slow down the aircraft during descent. Therefore split speed brakes are incorporated at the rear part of the undercarriage fairing. These are similar to the ones commonly used at the rear part of fuselages such as on the Fokker 100, the Bae 146, or the Blackburn Buccaneer. Due to their location, the application of speed brakes is not coupled to the lift on the wing, which is improves the flying characteristics of the aircraft.

Due to the fact the aircraft has no flaps, wing-mounted spoilers cannot be applied to quickly dump lift and transfer all the weight to the landing gear upon touch down. Therefore, during touch down, the aircraft rotates to an angle of attack of -3 degrees to ensure that the wing no longer provides any net lift. When the nose wheel touches the runway, the aircraft can start braking without the risk of skidding. Due to the fact that the passenger cabin is at an angle of 27-degrees with respect to the flight direction, the passengers experience roughly a 2-degree forward tilt as a result of this 3-degree nose-down deck angle. A positive implication of this requirement is that the nose landing gear strut is shorter than the mail landing gear struts, which saves weight." 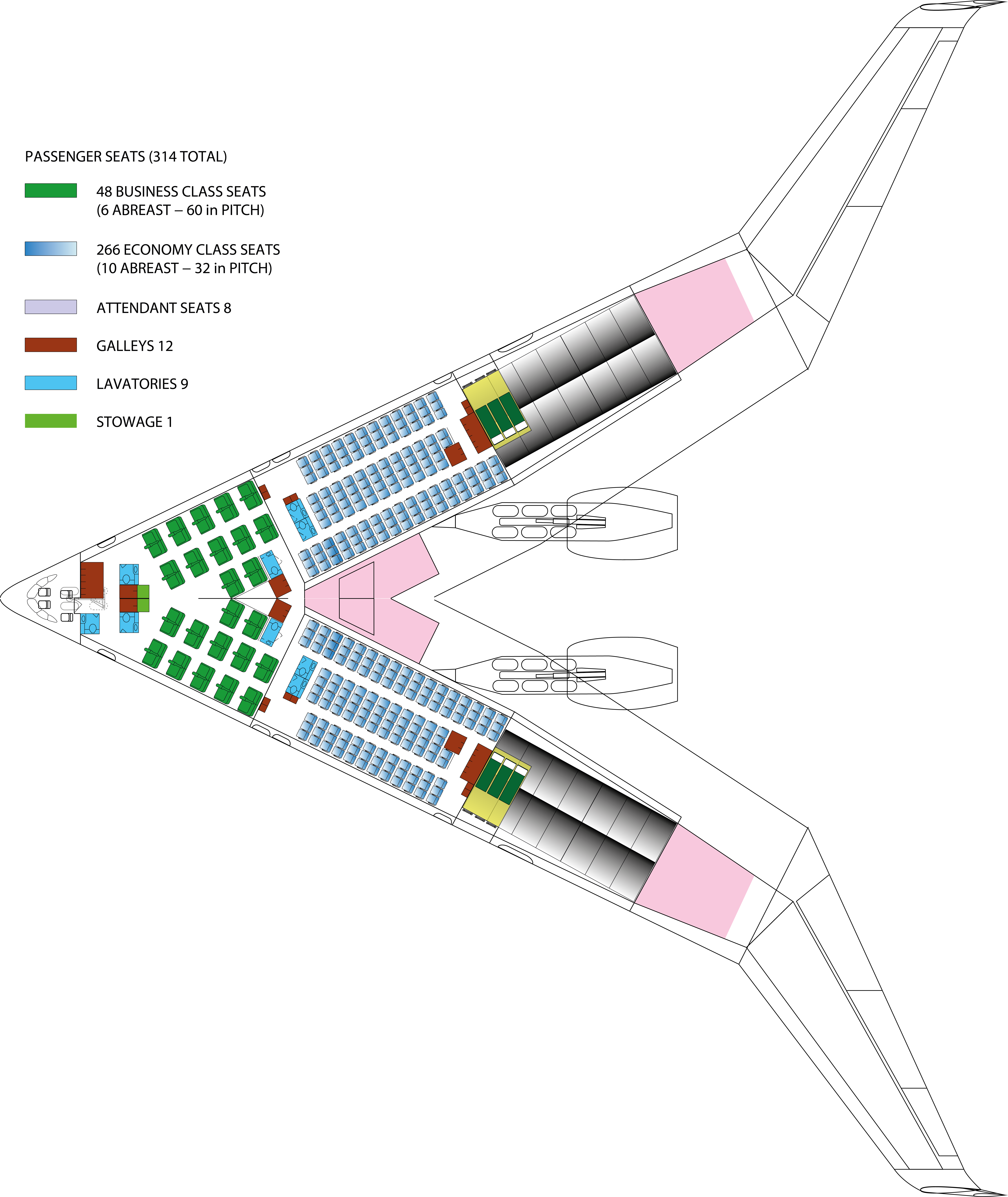 "The interior volume of the aircraft is used primarily by the passenger cabin, the cargo hold and the fuel tanks. Based on the ACAPs of the A350-900, the cabin was configured to hold 314 passenger seats in a two-class configuration. Passengers are seated in both legs of the V as well as in the connecting center body. Galleys and lavatories are positioned to ensure sufficient floor space is available. Structural analysis indicated the need for structural reinforcements in the fuselage in the form of three distinct walls: one at the beginning of each leg of the V as well as one on the symmetry plane of the aircraft. Large cut-outs in these walls at the location of the (cross) aisles allows for a seamless integration of these structural components within the furnishing of the cabin.

The main cabin is configured in a 10-abreast configuration with a total width of 6.1 meters, which is wider than the Boeing 777X, which is also configured with 10-abreast cabins. The height between the floor and the ceiling is 2.15m, comparable to the height of the lower deck of the Airbus A380. Due to the ovality of the wing structure surrounding the cabin, there are two vertical posts at either side of the cabin at every frame location. This separates the window seat from the window by roughly 40 centimeters. Windows are only located on one side of the cabin, reducing the amount of natural light that is entering in the cabin compared to current widebody aircraft. However, due to the low radius of curvature of the side arc, relatively large windows can be placed with only a limited structural weight penalty. To allow for that, a relatively high frame pitch of 70 centimeters is proposed.

There are four type A doors on either side of the cabin, technically allowing 440 passengers to be seated in a high-density configuration. Two type A doors are located side-by-side on either side of airplane and are connected by a cross aisle. This allows passengers to quickly egress through these doors in case of emergency. These two doors also allow a quicker boarding and deboarding. This is further enhanced by the fact that the main cabin has four aisles allowing the passengers to distribute themselves quicker throughout the cabin compared to a current widebody aircraft, possibly reducing the turnaround time of the aircraft."

"The cockpit of the aircraft is modeled after the flight deck of the Airbus A220, which is a regional airplane. The flight deck is designed for two pilots and with space for two jump seats. The flight-deck floor is 40 cm higher than the main-cabin floor to allow for stowage of the nose-wheel below the pilot’s seat. The high approach inclination requires large window panes to allow the pilot to properly see the runway during approach. The cockpit of the aircraft has been designed with four window panes to give the pilot excellent visibility to the front and to the side. There is still sufficient space to have a weather radar included in the nose cone."

Frequently asked questions about the Flying-V