Aerosol particles cool the climate less than we thought

The impact of atmospheric aerosols on clouds and climate may be different than previously thought. That is the conclusion of cloud researcher Franziska Glassmeier from TU Delft. The results of her study will be published in Science on Friday, January 29th.

Cloud decks cover vast stretches of the subtropical oceans. They cool our planet because they reflect incoming sunlight back to space. Air pollution in the form of aerosols -- particles suspended in the atmosphere -- can increase this cooling effect because it makes clouds brighter. The cooling effect of pollution offsets part of the warming effect of greenhouse gases. How much exactly, is one of the largest uncertainties faced by climate scientists.

A striking illustration of clouds becoming brighter as a result of aerosols, is provided by shipping emissions in the form of ‘ship tracks’. These are visible as bright lines within a cloud deck that reveal the paths of polluting ships that travel beneath the clouds. ‘Such ship tracks are a good example of how aerosol effects on clouds are traditionally thought of, and of how they are still represented in most climate models’, says Glassmeier. But according to the cloud researcher, ship tracks do not tell the whole story.
‘The problem is that the clouds get brighter at first but after a while they start to get thinner and thus less bright again. And ship tracks disappear before we can observe this dimming effect.’ To figure out the climate effect of air pollution in general, which is much more persistent than fleeting ship tracks, Glassmeier and her colleagues do not rely on ship track observations. Instead, they created an extensive data set of detailed cloud simulations. At the heart of their study, the researchers designed a clever new way to compare their simulated cloud decks to satellite snapshots. Such snapshots contain information about aerosol effects on clouds all over the globe, but have so far been hard to interpret. 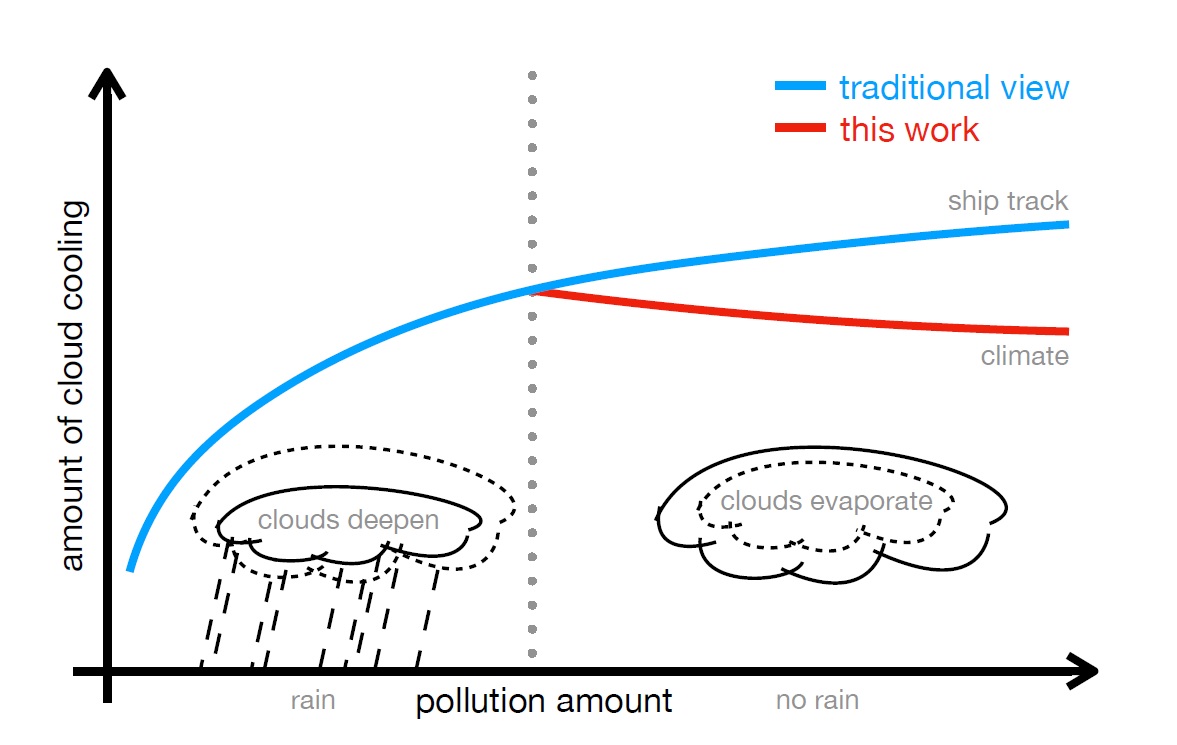 ‘Our conclusion is that the cooling effect of aerosols on clouds is overestimated when we rely on ship-track data’, says Glassmeier. ‘Ship tracks are simply too short-lived to provide the correct estimate of cloud brightening.’ The reason for this is that ship-track data don’t account for the reduced cloud thickness that occurs in widespread pollution. ‘To properly quantify these effects and get better climate projections, we need to improve the way clouds are represented in climate models’, Glassmeier explains further.

The study also has implications in the context of climate engineering. Climate engineering denotes targeted, so far mostly hypothetical, interventions into the climate system with the goal of alleviating the consequences of climate change. One example of a climate engineering method is the deliberate brightening of clouds through targeted emissions of sea salt aerosols, known as marine cloud brightening. ‘Our results show that even in terms of cloud physics, marine cloud brightening may not be as straight-forward as it may seem. A naïve implementation could even result in cloud darkening and the opposite of what was intended’, says Glassmeier. ‘We certainly have to do a lot more research on the feasibility and risks of such methods. There is still a lot to learn about how these tiny aerosol particles influence clouds and eventually climate.’