Heavy showers sweep over cities, flooding streets and houses when urban drainage systems get overwhelmed. Ever-increasing pressures from climate change, population growth and changes in land use augment the risks of urban floods. We’re currently unable to predict accurately where and when flooding will occur. Forecasting is particularly tricky in densely populated cities, where rainfall observations are scarce, spatial variability in land-cover is high and flood response to rainfall is very fast. Researchers want to use radar and innovative ground sensors to observe rainfall and water levels more accurately and at higher density to improve the reliability of hydrological predictions . Marie-Claire ten Veldhuis is trying to gather this information in various projects. Her objective is to unravel the complexity of urban hydrological response, to be able to predict with greater accuracy when and where streets will flood.

It’s becoming increasingly clear to governmental organisations and businesses that action needs to be taken to limit the damage caused by water. In the RainGain project, in partnership with regional water boards and the City of Rotterdam, a rain radar has been installed in Rotterdam that will allow rainfall in the city to be monitored more effectively. Marie-Claire: “The use of this radar is unique in an urban setting. We all know about the Royal Dutch Meteorological Institute’s national radar network, which consists of two radars with a radius of 100-150 kilometres. These radars measure rainfall at 1x1 km2 resolution, at an altitude of about 1500 meters. It’s difficult to translate these observations to rainfall intensities at street level, especially for high rainfall intensities, while these are the most critical for cities. With the radar in Rotterdam, we can measure rainfall more accurately, closer to the ground and with a much higher resolution That makes a difference in such a large, densely-populated city.”

In order to forecast rain more accurately, the radar still needs further development: “This type of radar has shown great potential in the open field, but has not yet been tested in an urban environment. We work in close collaboration with the Remote Sensing group chaired by professor Herman Russchenberg. By bringing together experts in radar technology, atmospheric scientists and hydrologists, we aim to tackle the challenges in obtaining accurate, high resolution rainfall observations and forecasts for cities. “

Before models can predict accurately whether streets will flood, more research is needed into hydrological processes in the city. “The complexity of urban hydrological systems stems from their high variability in land-use, uncertainty regarding the composition and properties of urban soils and the role of stormwater infrastructures that are thoroughly altering the ways urban systems respond to rainfall.

There are models that chart these hydrological processes in great detail, but their accuracy is entirely dependent on the quality of the input data. “At present, there’s a huge mismatch between the level of detail of the models and the resolution and accuracy of observations that are available to develop and validate the models.” In particular, we don’t know enough about the dynamic factors that have an impact on flooding, which leads to great uncertainties in the model outcomes. This includes factors such as rainfall, the absorption and infiltration capacity of streets, squares and water storage facilities in the city, the state of the sewage system and control rules of pumps and dams.

In her search for data, Marie-Claire also worked on the RainSense Amsterdam project. In this project, a range of partners, including the City of Amsterdam, TU Delft and software developer IBM, searched for new sources of information to collect data on rainfall and flooding. The researchers are investigating the potential of new sources of information, such as rainfall and flood reports collected by citizens through call centres and smartphone apps and low-cost sensors for application on lampposts and umbrellas.

Insurance firms also have an interest in developing expertise on localised urban flooding. “A lot of research is being done on climate change and the impacts it may have on extreme weather phenomena, but we haven’t yet worked out how much damage this will produce. We’re still making a lot of guesstimates. In the OASIS KIC Climate project, we worked with insurance firms to examine what were the dominant failure mechanisms and what actual damage was incurred. By combining rainfall and damage information, we develop damage functions and risk models that help governments to take targeted measures and make sure that massive investments in sewage systems, water-storage squares and radars are made effectively.”

Along with doctoral students and other colleagues, Marie-Claire is working hard to find the last pieces of the puzzle to develop a good model for predicting flooding in cities. “I’m fascinated by how water systems work. It’s great to work on this in an urban context, because it’s extremely relevant to society. And it’s very complex, because you’re dealing with diverse kinds of information. I’m able to include a great deal of information in a model, but there are still many limits. My motivation for continuing is to close that information gap.” 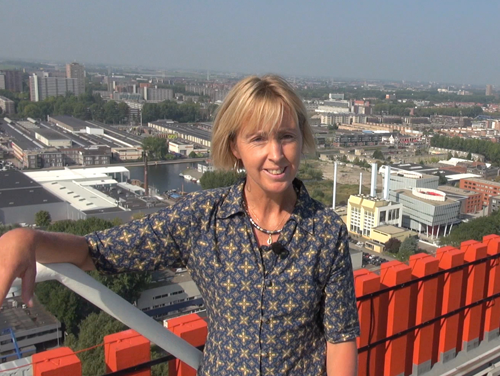