Black holes are one of the most remarkable phenomena in the universe. But what do they look like? And how can you depict something like this? Researcher Annemieke Verbraeck is developing a new simulation based on the Hollywood film Interstellar.

They swallow up everything around them and inside there is only the deepest darkness. But they are surrounded by a spectacular light show. Black holes are a fascinating phenomenon in the universe. The mass inside a black hole is so compact that it swallows everything up and nothing can escape from it. Not even light can escape. It therefore does not travel in straight lines and is strongly distorted.

We know what a black hole looks like thanks to an image from April 2019: a dark eye surrounded by a ring of light. The Oscar-winning Hollywood movie Interstellar depicted a black hole in spectacular fashion. The dark eye plays a key role in this sci-fi blockbuster. The black hole provides the main character’s spaceship with enough speed to keep flying, so that he can ultimately save humanity. The way this was depicted received tremendous praise both within and outside the academic world. Many scientists worked on the film. One of them was American Nobel Prize winner and astrophysicist Kip Thorne. The depiction of the black hole even resulted in scientific publications.

Researchers at Delft University of Technology were able to make the visualisation faster.

At TU Delft, researchers have now continued to build on how this area was depicted. Researchers Annemieke Verbraeck and Elmar Eisemann of TU Delft’s Computer Graphics and Visualization Group have made several improvements. ‘We were able to make the visualisation faster so that the calculations can be performed using an ordinary computer,’ says Verbraeck. These are important innovations, which pave the way for displaying a black hole in a museum, for example. 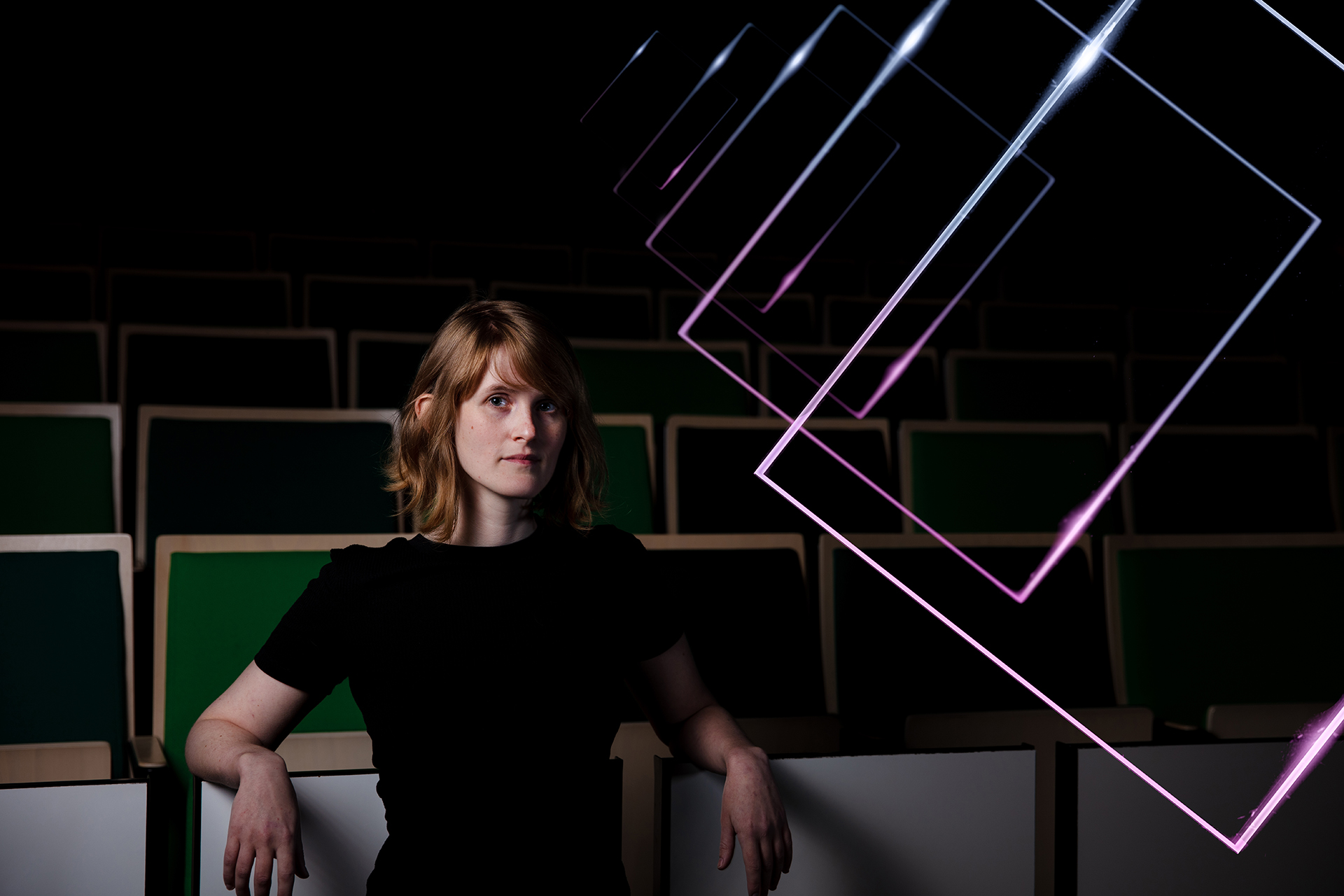 For the film Interstellar, it was important that the effect of the black hole on its surroundings was depicted as realistically and as sharply as possible. After all, the blockbuster was shown on IMAX screens in cinemas. ‘Therefore, they wanted to very accurately reproduce the distortion of the image for all the stars, and their approach was quite slow. A lot of computing power was needed and it therefore took a long time to create the images,’ says Verbraeck.

One of the reasons for this is the way in which the images are processed. The light you see as a circle around a black hole comes from the visible stars in the universe. Because the black hole swallows everything up, the light does not travel in straight lines and is distorted. Interstellar’s researchers calculated this deflection for each pixel. Pixels are the small dots that make up an image.

As a result, they depicted the effect of the black hole in great detail. They also took into account how the light changes with the viewer’s perspective. So the deflecting light looks different as you approach the black hole. This requires a huge amount of calculation. ‘When you look at the calculations in their paper, you see pages full of complex formulas, which are difficult for many scientists to follow. This is because everything is represented in great detail. We wanted to take a simpler approach.’

The standard method of constructing an image in computer graphics is to determine where a pixel’s light rays come from. This way they get the right colour and intensity. In this case, that light comes from galaxies and individual stars in the vicinity. You want to show this for each pixel, because the black hole deflects this light.

How do you know exactly how much light to display for each pixel? To be able to answer this question, things gets complicated. Simply put, for Interstellar, the researchers used an elliptical shape to create a beam of light for each pixel in order to depict all the starlight in the vicinity. Verbraeck also applies this method, but in a slightly different way. She took the vertices of a pixel, creating a polygon. This shape is easier to calculate than an ellipse. ‘By making a beam of light in this way, you lose a little image quality, but you gain speed,’ says Verbraeck.

This makes the simulation of the black hole simpler. A film consists of a series of separate images, shown in rapid succession. Each image is called a frame. And for Interstellar, a large group of computers had to spend a lot of time performing numerous calculations for each frame. ‘We’re trying to calculate as little as possible and won’t check the path of a pixel on a frame-by-frame basis. With the adjustments we've made, the calculations can be performed by an ordinary computer. And so you can show the simulation of a black hole on it.’

A simulation like this one brings astronomy much closer to the viewer.

You are sitting in a spaceship and rotating in a stable orbit around a black hole. If you look through the window, this (see the video above) is the view you get. Among other things, you can see how the stars and nebulae (clouds of gas) are distorted by the presence of the black hole.

Both Verbraeck and the Interstellar researchers include each star in their calculations. But Verbraeck also uses something called an adaptive grid. It’s a type of grid, divided into sections. This ensures that you don’t have to perform a very complex calculation for each point on your screen, but that you calculate the situation between different points. ‘As a result, although we depict the distortion of the light from the surrounding stars less precisely, the end result looks virtually the same,’ she says.

Most of these calculations are performed on the GPU. This is the part of the computer that simultaneously performs the same calculations and is used for many applications. A computer can process images quickly as a result. ‘In my case, the GPU performs the calculations, including the colouring of the pixels, for all pixels at the same time,’ says Verbraeck.

She has not yet been in contact with the people who made Interstellar. ‘I did attend a lecture by one of the researchers, which was interesting. Perhaps we'll get in touch one day, but it’s not so important. Really, we do different things. Their depiction is for a movie and my approach is simpler and has a different purpose, so that you can also run it on an ordinary computer.’

Because Verbraeck’s method requires less computing power, it opens the way to new applications. For example, by travelling to a black hole on a screen in a museum or by showing this trip in the astronomy degree programme. This will make knowledge about this phenomenon accessible to a large audience.

A simulation like this one brings astronomy much closer to the viewer. Instead of just talking about a black hole or showing a picture of one, you can get close to this phenomenon and see for yourself how the light deflects and how the darkness swallows up everything around it. This way, you travel to a black hole yourself on a screen. You can’t do it in real life, but such a simulation makes it possible. ‘This is definitely something that can be made in the future, although we need to take some extra steps. It needs to be made more user-friendly, for example. Once we achieve that, an application for the general public is certainly possible.’

Showing a simulation in the astronomy degree programme would be very special for Verbraeck, because she has a Bachelor's degree in astronomy herself. ‘I decided to study it because I thought it would be fun and I enjoyed mathematics. You always see nice pictures in astronomy, but I noticed that in practice what you’re actually calculating is pretty vague. You have broad margins and indications of how far away galaxies and individual stars are from each other. I had a hard time picturing stuff. That’s why I switched to computer science at TU Delft for my Master's degree. In particular, I wanted to do something with graphics, because then instead of just making calculations, you also get to see the results on your screen. That appeals to me, as does developing this simulation.’

Her background in both fields made Verbraeck the ideal person for this research into black holes. Her supervisor Elmar Eisemann thought so too. He is the professor heading the Computer Graphics and Visualization Group. Eisemann asked Verbraeck to improve on the work of Interstellar, because the depiction was very good but also very slow. ‘I understand the papers on astronomy, because I studied it. That certainly helped in this case. But I wasn’t so enthusiastic at first, because I’d had enough of astronomy. That turned out to be a mistake. This research has brought back my love of astronomy, because now I can use computer science to show what a black hole looks like. For me, the power of astronomy is showing mysterious and fascinating phenomena. And I was able to do this by combining the two disciplines.’

Verbraeck’s rediscovered enthusiasm has proven to be contagious. Her supervisor Eisemann liked the new simulation of the black hole so much that he had an image of it printed. It’s about two meters wide and hangs in the professor’s living room. 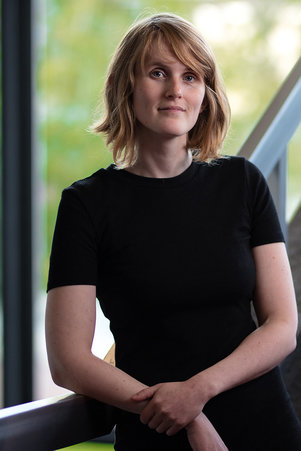