Designing together in a digital polder model

The topic of discussion was the redevelopment of the Kabelfabriek area in Delft. The electric cable factory was built in 1914, and the industrial buildings are the last remnants of Delft’s 20th century industrial glory. Next to the current pressing need for housing, there is also the need to make the redevelopment commercially feasible and viable while respecting the district’s tangible and intangible heritage.

The game consisted of three rounds. At the end of each round, the participants assigned certain areas (size and location) to six different functions such as: residential, commercial, cultural, public, and empty. A computer processed the inputs and generated a 3D map of the mass of the building containing the inputs of the participants. The engine of the game ensured that key performance indicators generate fair and explainable trade-offs of the participants’ choices. The visual created after each round was the starting point for the next round, which could change the functions of the interior for example, or the skin of the building with aspects such as daylight and height.
During each round, one of the participants took the lead in negotiations. The future inhabitant may ask the developer and the architect to locate the apartments along the Schie River. In another round, the real estate developer may ask the mayor to allow more cafés and restaurants and increase the area for commercial rent. All participants have an equal opportunity to bring forward their preferences.
After all the players have led a round of the serious game, their preferences were mathematically equalised to form a consensus simulating many rounds of virtual negotiations. A point of equilibrium was found which acted as the basis for a generative design process that mapped the requirements and the weighted performance indicators and created an objective justifiable envelope shape for the building. 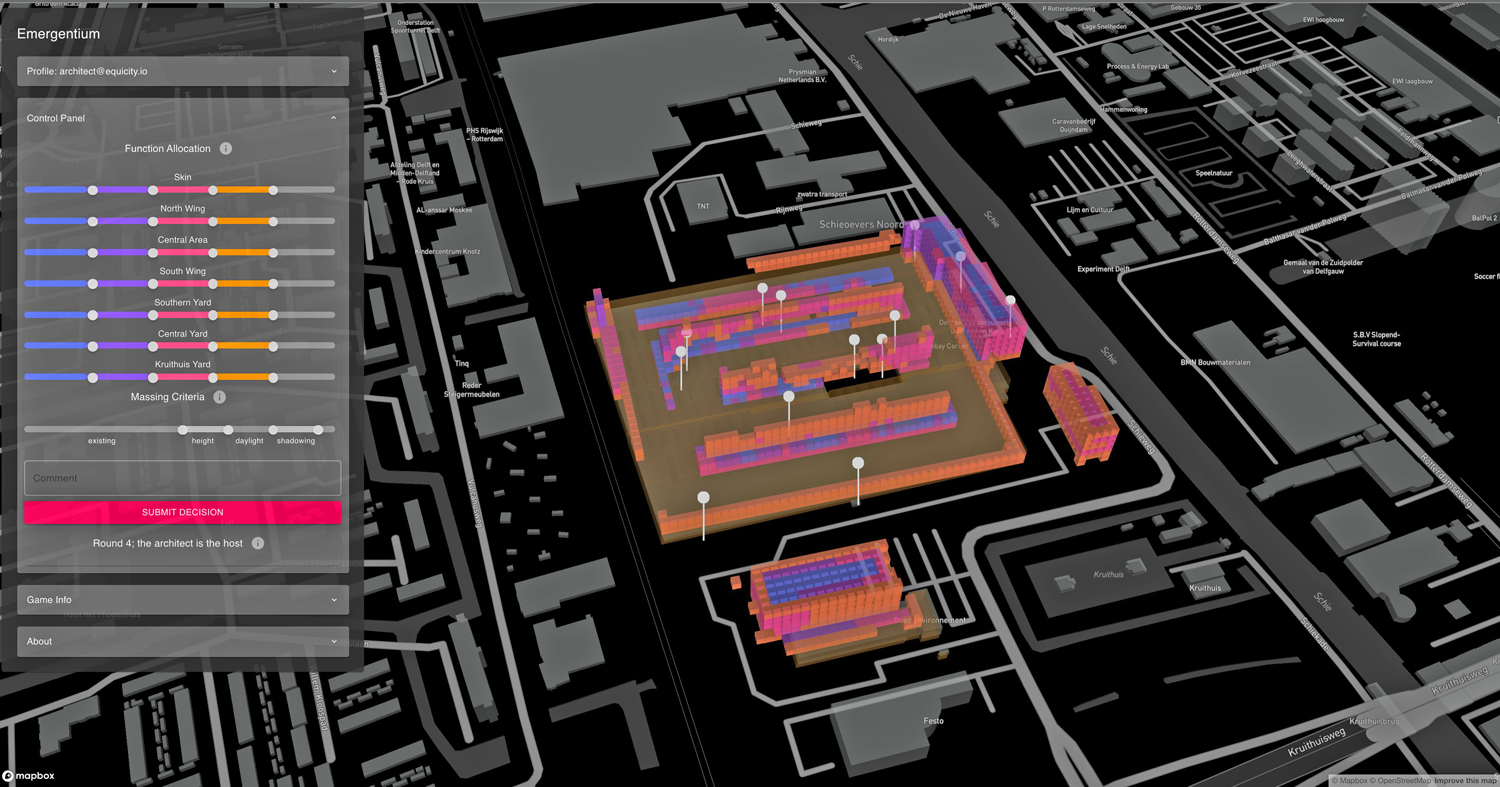 The distribution of functions across the area in accordance with the participants' choices. Blue is for housing, purple are shops and restaurants, pink is for cultural destination and orange is public space. (Image: Shervin Azadi)

Bruno de Andrade was the game master during the Zoom sessions. Did the serious game EquiCity perform as expected?
“It surpassed our expectations in terms of players’ interaction because, though they would use the same online platform, we designed it to be played in person accompanied by a map and Lego bricks to foster discussion. We needed to halve both the duration of the workshop and the rounds to make it feasible for online use and avoid digital fatigue.”

Did participants grasp how it worked?
“Yes, they did, though the first round took a bit longer to allow them to become familiar with the simulation gaming platform and the social negotiations’ dynamics. After the first round, the heated discussions on the decisions around the Kabelfabriek brought the natural gameplay flow.”

The purpose of this NWO project was to develop an ‘interactive approach to collaboratively finding solutions for complex challenges in historic cities’. On the basis of this experiment, do you think this is possible?
“Yes, this was a pilot project to experiment with the potential of serious games for architectural and urban design and planning, mostly to propose an alternative for consultation processes led, for instance, by the municipality when facing urban redevelopment issues and conflicting stakeholder positions.”

What more needs to be done?
“This project has laid the foundation for many interesting pathways such as: more integrated simulations for better projections; more playful environments for greater interactive participation; and, more direct assessment of decisions for greater insight. This is also reflected in the feedback of our participants.”

In real life, the redevelopment of the industrial area along the Schie was contracted (in Dutch) to real estate developers in 2019. For the EquiCity team it’s the experiment that counts. To them, the Kabelfabriek area is just a canvas for the exercise.
The EquiCity team consists of Dr Pirouz Nourian, Shervin Azadi, Dr Bruno de Andrade and Professor Ana Pereira Roders - all from the Faculty of Architecture and Built Environment. For the experiment, they were joined on Zoom by six volunteers playing the roles of a future resident, the mayor, a real estate developer, an architect and two neighbours.

More information about the EquiCity project or the video registration of the online game.

This article was previously published at TU Delta and was written by editor Jos Wassink.
Images by Shervin Azadi and Google Earth.

Headerbeeld: The Cable factory was built in 1914, and the industrial buildings are the last remnants of Delft’s 20th century industrial glory. (Image: Google Earth)