Delft University Fund will celebrate its 95th anniversary in 2020. A lot has happened in those years, and alumnus Anton van den Berg would certainly agree. This year he too turned 95, and recently  he started donating to science via Delft University Fund.

According to Anton van den Berg, his studies were the perfect start to his career and everything that followed. As a chemical student, he was a member of the Delftsche Studentenbond (DSB) student association. In 1952, he graduated from what was then the Delft Institute of Technology. “After my studies I went straight to Phillips in Eindhoven. There was a shortage of university graduates in those days. Chemical engineers were immediately approached by Philips as soon as they graduated. I didn’t have to take any action myself. I simply got recruited; that’s how things were back then,” says Van den Berg.

In his house in Hummelo he shows prints on the wall of Pico da Neblina, the highest mountain in Brasil, where he moved for work in 1954 and of which he has fond memories. “Philips had only been operating there for a few years, so there were plenty of teething problems. For example, I remember the Bakelite paint issue,” he says. This early plastic had a disadvantage: its ugly brown colour. So Philips painted a series of its radio cabinets in a different colour.

“However, those radios contained heavy transformers that became terribly hot. These transformers were all in the same place in the device. The Bakelite above it got so hot that it scorched and turned brown again. That was a huge disaster as it affected the entire series.” As a chemical engineer, Van den Berg always enjoyed solving teething problems like this.

He stayed in Brasil for nine years; three of his four children were born there and they are proud of their Brasilian nationality. His fondest memories of his career are also from his time there. “I often think back to the time when I travelled from Sao Paulo to Rio de Janeiro every week to a factory where vinyl gramophone records were made. That factory was at an altitude of 700 metres, near a waterfall. This turned out to be very useful for the vinyl pressing process, because the ice-cold water from the waterfall could be used to cool the records. At the time, the factory was quite primitive by European standards, but we produced very good gramophone records.” 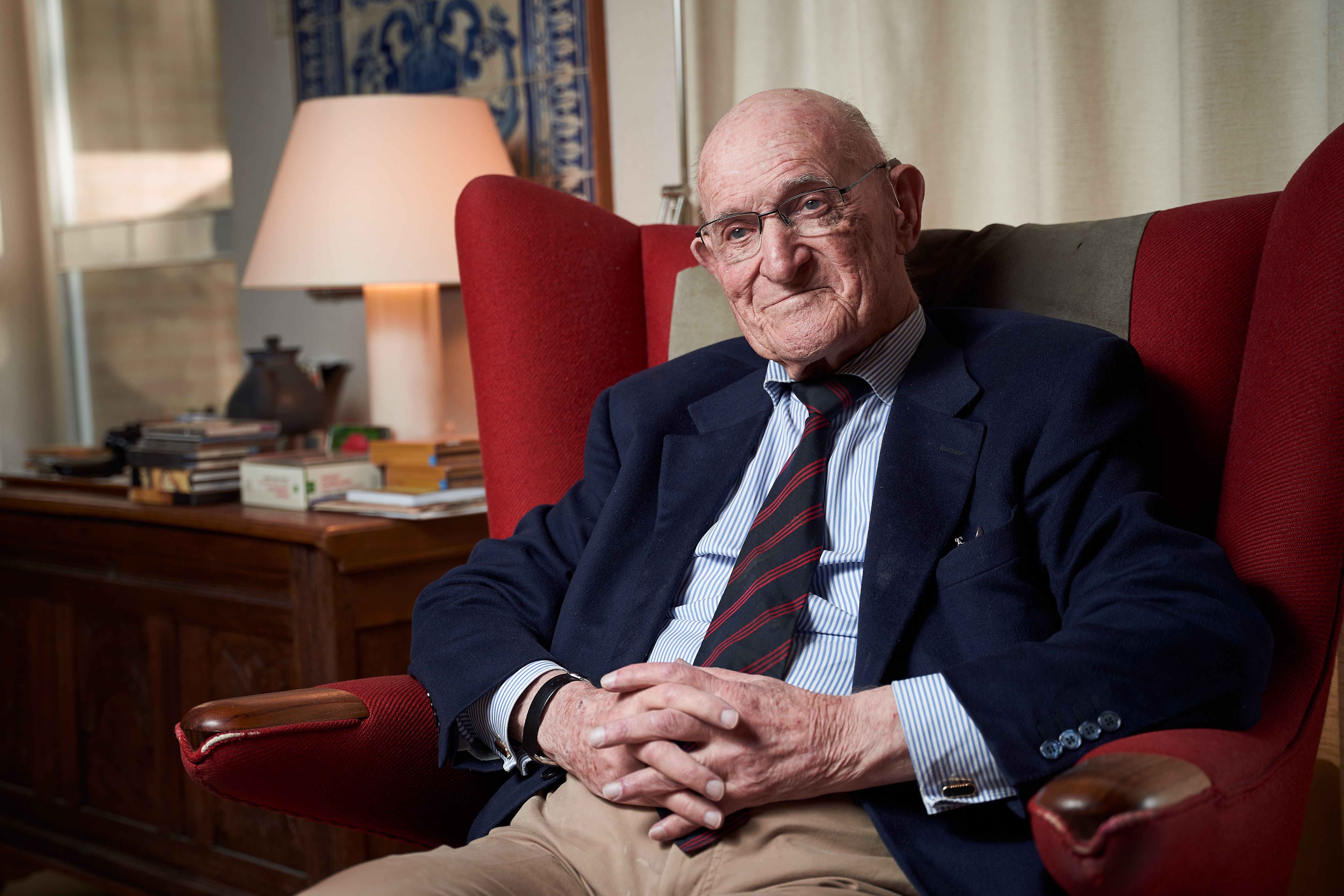 Ir. Anton van den Berg: “I’m a bit old-fashioned in that I've only had one employer."

People who retire take a lot of knowledge with them

He returned to Eindhoven in 1962. “I’m a bit old-fashioned in that I've only had one employer, and Philips was an excellent place to work. They already had a good pension scheme in those days and it’s still pretty good today.” He was plant manager at the Philips factory in Doetinchem from 1966 to 1970, after which he was asked to move to Portugal. He had already mastered the Portuguese language during his time in Brasil. “I had a Brasilian accent of course, which my colleagues in Portugal found very amusing.”

He was technical director for Philips in Portugal until 1982. He then retired, but continued to live in Portugal for another twelve years. During those twelve years, he worked as country director for the American organisation IESC, the International Executive Service Corps, founded by banker and philanthropist David Rockefeller. “People who retire take a lot of knowledge with them,” says Van den Berg. “Rockefeller didn’t want that knowledge to go to waste – he wanted to use it to set up relief agencies in other countries that could help local businesses.” The IESC operates in 137 countries and aims to reduce world poverty by supporting the private sector.

Van den Berg doesn’t really have any advice for the newest generation of engineers: “Life just happens. Before you know it, you’ll be 95,” he says, laughing. His age played a role in his decision to donate to medical themes, such as Stan Brouns’ bacteriophage research, Marcel Reinders’ Alzheimer’s research and Mark Bisschops’ dementia research. Van den Berg had to say goodbye to a lot of people, including his wife with whom he was together for 70 years. “I’ve also lost almost all of my friends, many of whom suffered from a form of dementia. It would have been great if there had already been a cure for.”

Are you inspired by this story? And do you also want to explore the possibilities for permanent involvement at TU Delft? Then we would like to get in touch with you. Send an email to alumnirelations@tudelft.nl.

Would you also like to contribute financially to research with impact? For more information please contact Jacqueline Kalkman, via ufonds@tudelft.nl, +31(0)15 278 6409 or have a look at <link en delft-university-fund research>www.tudelft.nl/en/delft-university-fund/research.