‘The largest ships at the Rotterdam cruise terminal produce an amount of harmful emissions equivalent to that of tens of thousands of cars and trucks,’ Lindert van Biert says – thereby indicating that sustainability is not just about greenhouse gases. ‘We can switch to liquified natural gas (LNG), to green and carbon-neutral synthetic bio-fuels, or even to carbon-free hydrogen or ammonia. But using these fuels in combination with an internal combustion engine means that we will continue to produce nitrogen-oxides and particulate matter. I want to reduce all emissions.’

The fuel cell is the ideal solution

Although capturing harmful emissions is an option, it requires additional components and will raise costs. Van Biert: ‘This will negatively affect engine performance as well as maintenance. Fuel cells are a clean alternative.’ In these electrochemical systems, hydrogen and the oxygen in the air are directly converted into electricity. They have a very high efficiency, and, at a low operating temperature, water is the only reaction product. Moreover, fuel cells are a quiet source of power, increasing the comfort of crew, surroundings, and sea life. A single fuel cell produces about 1 volt, but large ‘stacks’ of fuel cells can produce sufficient electrical energy to power ships. 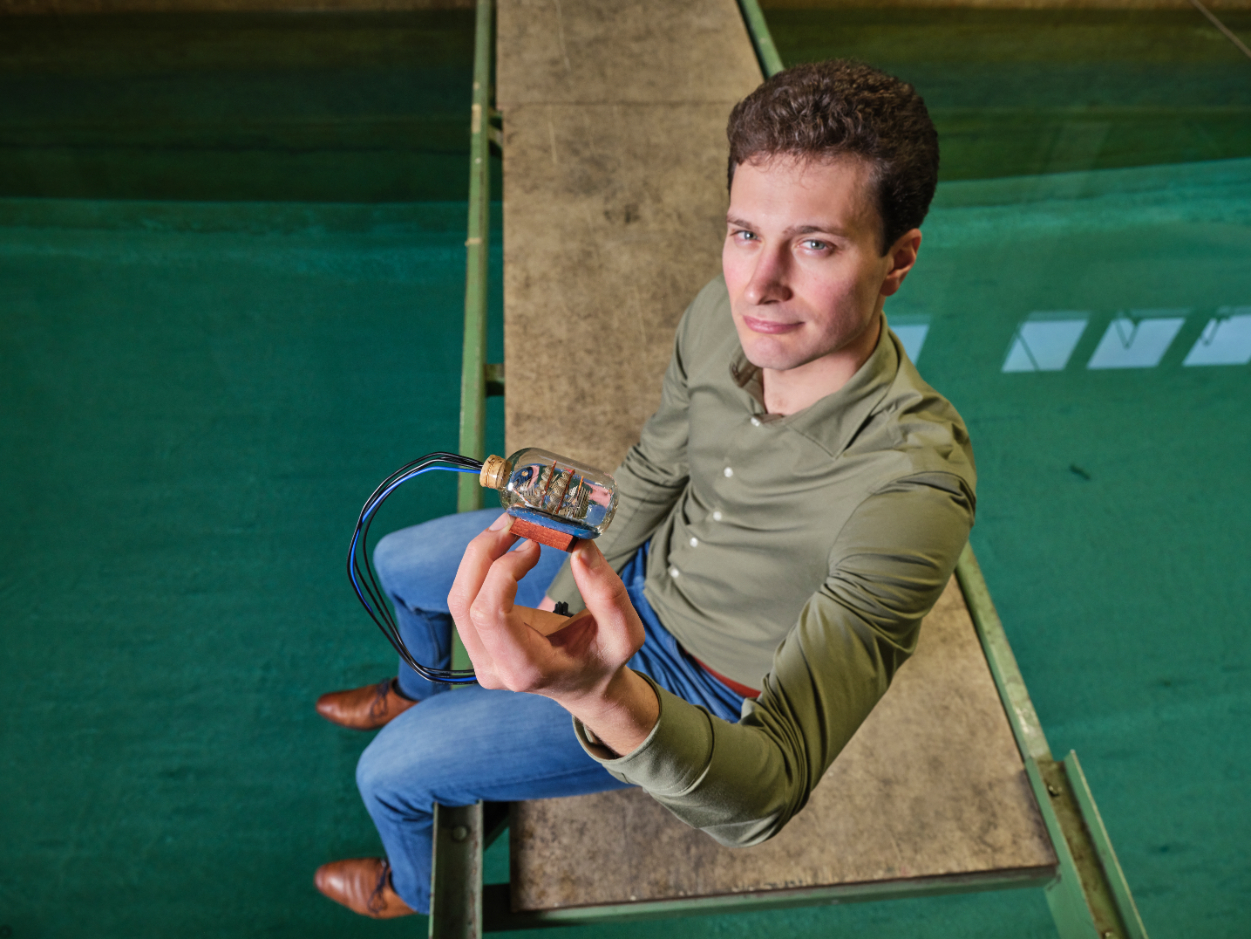 No matter the fuel, combustion engines will emit nitrogen oxides and particulate matter.

Van Biert takes the fuel cells “as is” for his research within the Ship Design, Production & Operations group. ‘Given realistic operating conditions, I look at how to best integrate fuel stacks into the power system. What is their optimal operating temperature, what are the optimal supply pressures of hydrogen and oxygen? And how can we ensure that these will perfectly match any operating condition? We build models to optimise power density, efficiency, and durability.’ The latter is a typical maritime challenge. State-of-the-art fuel cell technology for cars has a service life of five thousand hours, which means they last for about ten years and 250 thousand kilometres. In shipping, where the intensity of use is much higher, these will last only a single year. Size-wise, an engine based on fuel cell stacks is comparable to a combustion engine. On-board fuel storage, however, is quite a different story. Diesel fuel can be stored in the ship’s double hull. But hydrogen requires five times as much space and will have to be stored cryogenically on deck. And whereas cars have plenty of refuelling options, ships do not. Additional auxiliary systems and safety requirements only increase the challenge.

We build models to optimise the power density and durability of fuel cell systems. 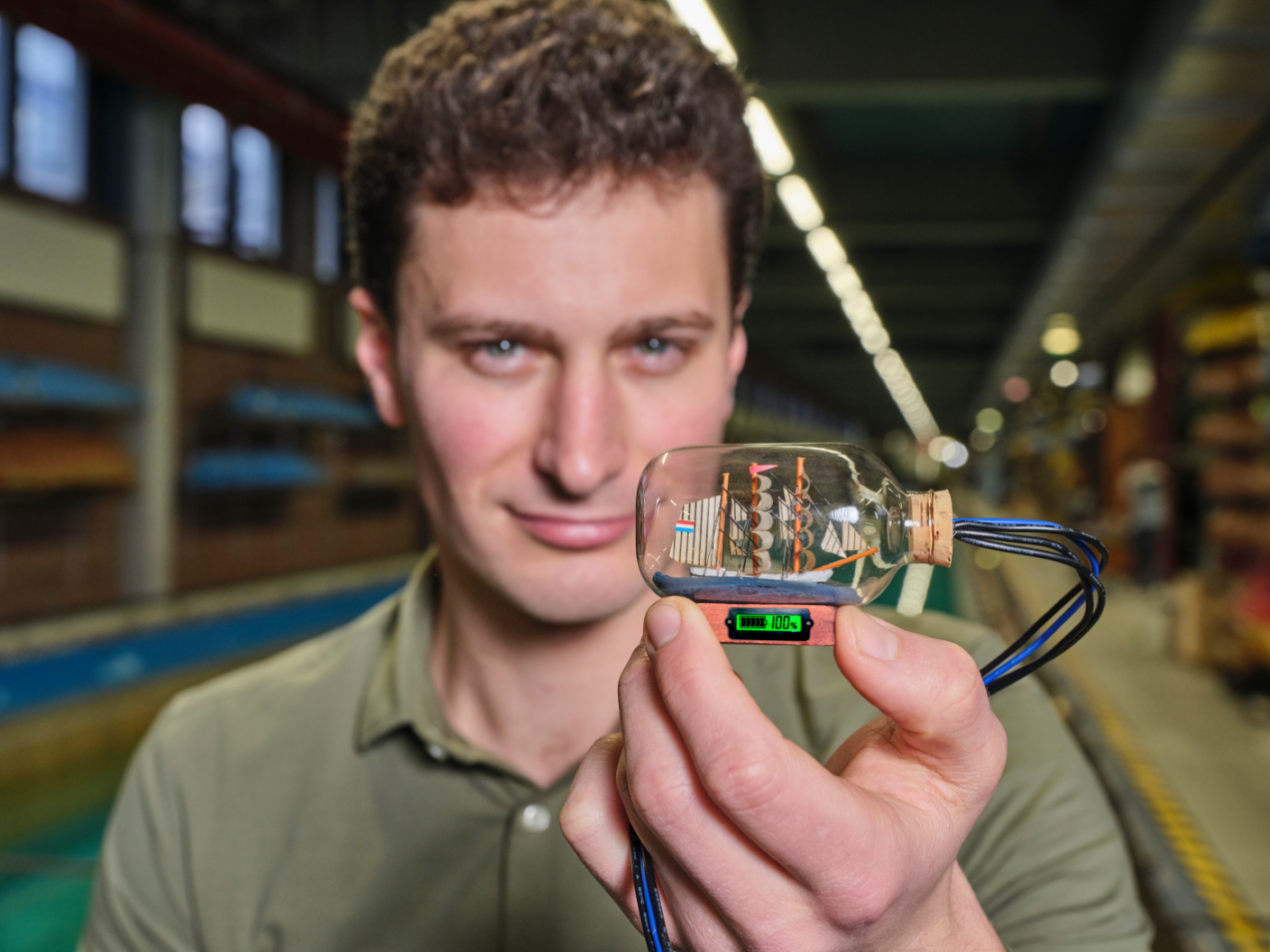 Pure hydrogen isn’t the only alternative fuel available. Van Biert: ‘A lot of my research is about using fuel cells in combination with hydrogen carriers such as LNG or ammonia. Though not an ideal solution, it will reduce emissions substantially. Fuel consumption will be reduced as well because of the increased efficiency.’ The hydrogen needs to be released from these fuels, on board the ship, in a process called reforming. ‘A stand-alone reform facility can be used, but it is more efficient to integrate it into the fuel cell as it already produces the heat needed for reforming.’ This requires the fuel cells to operate at a higher temperature, allowing any impurities created in the reforming process to bind to the catalyser, thereby potentially reducing fuel cell lifetime.

Optimal integration of fuel cells also depends on the type of ship. A container ship will spend most of its time at full speed, stopping only for loading and unloading. A hoisting ship for installing wind turbines at sea, however, will only need maximum power very infrequently. ‘Cruise ships are cities at sea,’ Van Biert says. ‘Next to ship propulsion, power is needed for hotel activities, air conditioning, for making drinking water and for various other auxiliary systems. If we can solve the energy issue for such a city at sea, we can solve it for many other situations as well.’ Some of his research is guided by market interest. At the moment, inland navigation is very interested in sustainable solutions because of their high regulatory burden. ‘Developments in hydrogen-powered energy sources have already reached that market. Within the universities, we focus on alternative solutions that are still in a very early stage of development. For testing these alternatives, we use data and practical knowledge acquired using these more mature systems.’ 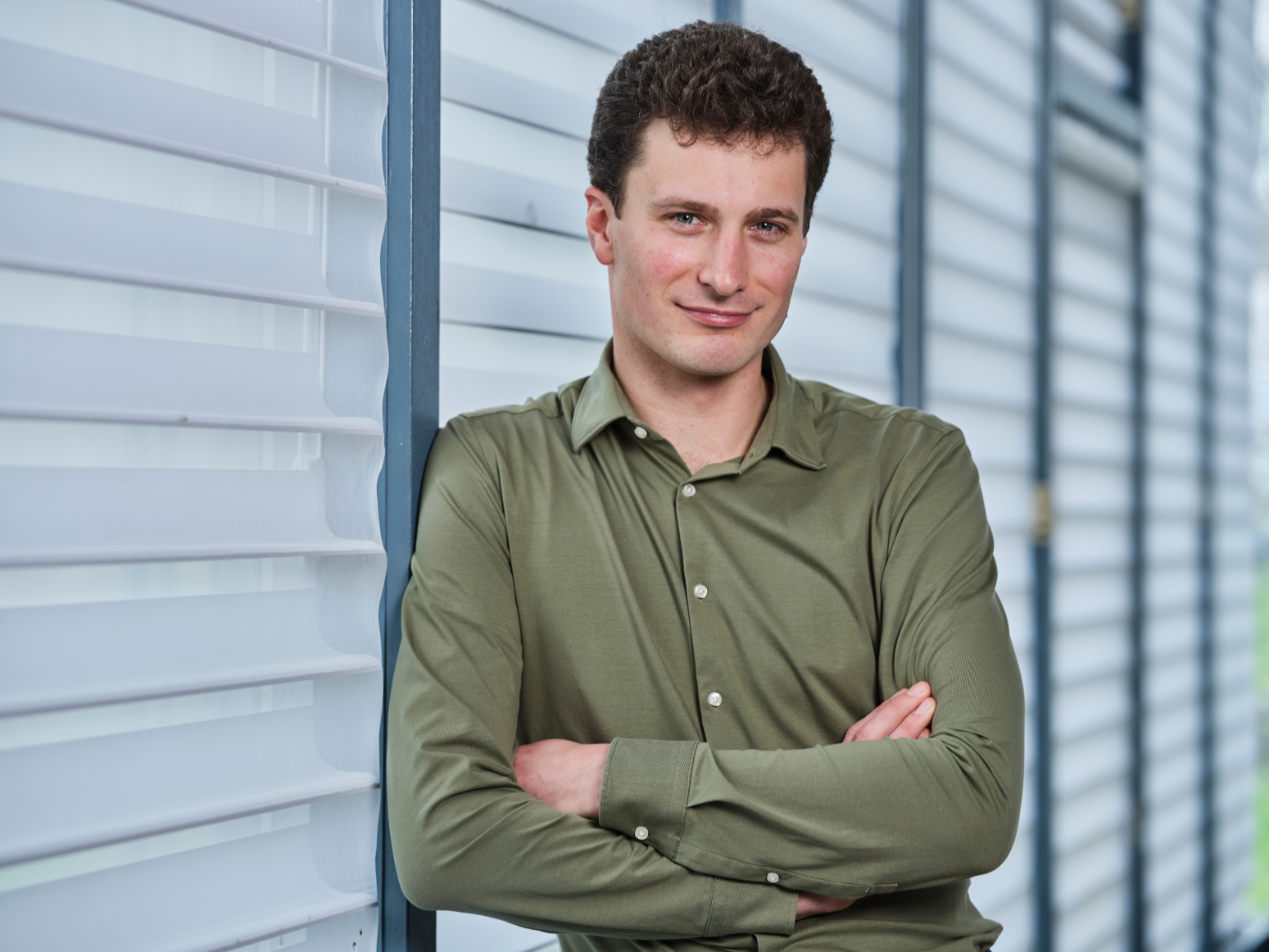 If we can solve the energy issue for a cruise ship at sea, we can solve it for many other situations as well.

Compared to other sectors, shipping is more sensitive to changing regulations because of the thirty to fourty year economic lifetime of ships. As the limited space of existing engine rooms typically does not allow particulate filters or catalysers to be installed, such regulatory changes necessitate major, and expensive, changes in both design and propulsion. Van Biert: ‘As TU Delft, we are therefore involved in various projects aimed at increasing the modularity of ship energy systems. Our aim is to make replacing the power source or fuel storage as simple as loading and unloading containers.’

Achieving sustainable shipping requires the whole chain to be updated. Hydrogen isn’t very expensive, but it must be green hydrogen. There is also very limited existing infrastructure for bunkering alternative fuels – at a specific location and pressure in the Rotterdam Harbour, for example. ‘Diesel prices are easily six times lower,’ Van Biert says. ‘More and more shipowners and shipping carriers indicate that some form of (fair) taxation is needed to put things in motion towards sustainability. It’s not just a matter of new technology, politics must play its part as well.’

If it is up to Van Biert, the Dutch maritime sector will take the global lead in making shipping more sustainable. Recently, the Netherlands Enterprise Agency has invested fifty million euros into three projects aimed at developing sustainable shipping solutions. ‘TU Delft is involved in all three projects. These are very broad partnerships, involving direct competitors and sharing an acute sense of urgency.’ For Van Biert, it is not about the year 2050. ‘I look forward to the moment that sustainable solutions will be commonplace in shipping, simply because they have become affordable and dependable. And then look back and be able to say: “That is what we worked on in 2021, and we did it!”’

This is a story of Faculty of Mechanical, Maritime and Materials Engineering (3mE)