Position assisted services have experienced tremendous popularity and growth over the last decade, fueled by the advent of location aware devices. Radio positioning systems can be divided into satellite based and terrestrial based positioning systems.

Global Navigation Satellite Systems (GNSS), such as GPS and Galileo, can be considered as a space network of synchronized ‘flying atomic clocks’. This, in turn, can provide up to several meter accurate positioning, by broadcasting radio ranging signals from satellite to a mobile user, with line-of-sight signal propagation. However, in built areas and urban scenarios, such systems are not very suitable due to signal blocking and attenuation, and non-line-of-sight propagation causing multipath effects.

Terrestrial radio positioning systems have been developed. They are diverse and customized for particular applications. Consequently, these systems may fail to provide sufficiently accurate positioning and ubiquitous localization, needed for instance for Intelligent Transportation Systems (ITS). To meet the requirements posed by future applications of wireless terrestrial positioning systems, appropriate signal processing and positioning techniques need to be designed and implemented, based on an accurately synchronized infrastructure. 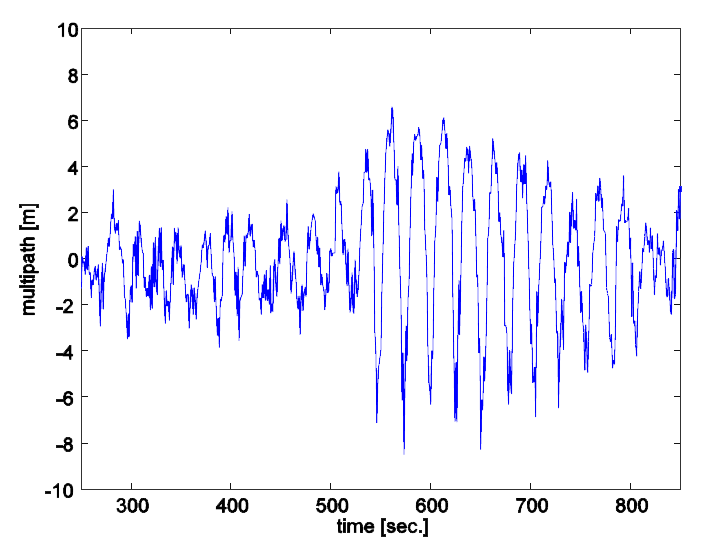 Example of GPS pseudo-range measurements affected by multipath. The multipath error effect (in the measured range) is shown along the vertical axis in meters. The accuracy due to measurement noise lies typically in the few-decimeter range. As shown here, multipath can have a significant impact of several meters in the measured range (and resulting position solution). A professional high-end receiver was used here with a roof-top installation. With mass-market consumer GPS equipment the effect can be even much worse. Ranging and positioning with SuperGPS radio signals will be largely insensitive to multipath.