Flow around the Eastern Scheldt barrier

In 1953 a large part of the South-West of the Netherlands was flooded in a severe storm, resulting in the deaths of over 1850 people and a significant damage to the properties inside the polders. To prevent future disasters like these a special committee was appointed, The Deltacommittee, to come up with a plan. Amongst other things, the committee advised the closure of several tidal basins, one of them being the Eastern Scheldt. This eventually led to the building of one of the most iconic constructions of the Dutch ongoing battle against the water: the Eastern Scheldt storm surge barrier.

Recent investigations show that strong scouring takes place at both sides of the Eastern Scheldt storm surge barrier, and equilibrium has not yet been reached. Although at this moment the stability of the barrier itself is not compromised, it is envisioned that if no action is undertaken the risk of damage may only increase in time. The scour holes seem to become deeper than foreseen and this is not completely understood. Uncertainties in the exact cause of the erosion complicates taking control measures to stop the ongoing erosion. Besides, the lack of knowledge on the situation makes it very hard to predict the behaviour and future development of the scour holes.

For an efficient, cost-effective approach that will also mitigate or counter the problems on the long term it is necessary to determine the cause of the scouring at the Eastern Scheldt at a fundamental level.To summarize: more insight is needed in the local flow characteristics.

The PhD-project will be focused to understanding the complex flow in the area near the barrier, with special attention to near-bed processes and relating this to the extensive scour.

We will use several different strategies during this research. Large-scale flow characteristics and general behaviour of the flow are uncovered by analysing an extensive set of data that was collected in the field by Rijkswaterstaat. We will use this knowledge to set up a detailed experimental program, so we can investigate the most relevant aspects of the flow in a controlled environment. Furthermore, in the laboratory we can perform measurements with much more detail than in the field, making it possible to really focus on the fundamental processes. The knowledge obtained from the experiments will be made operational in a state-of-the-art numerical model. After sufficient validation, we will upscale the numerical model to represent the prototype scale: the Eastern Scheldt estuary. The large-scale model will then in turn be validated using the field data.

So, in this research we will complement field data with experimental data and numerical modelling, to get a complete idea of the flow characteristics in this highly complex area. This will lead to an engineering tool (= validated model) which in turn can be used to investigate flow-field manipulations to mitigate, or even stop, the scour problems.

The team working in this project consists of: 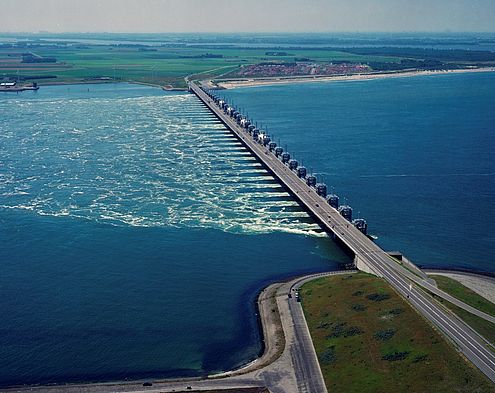 Aerial picture of the Roompot Inlet of the barrier, taken from Neeltje Jans, looking towards Noord-Beveland. This is one of three inlets that span the Eastern Scheldt. 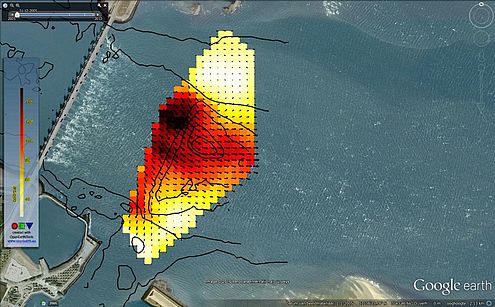 Measured 2D depth averaged flow field near one of the inlets. Black contour lines indicate the bathymetry, showing a clear scour hole in the middle of the channel.