Multifunctional flood defences are structures that are intended to protect land against being covered by water and that are meanwhile used for other purposes, such as transport, housing, shipping, agriculture, nature and recreation. A dike with a road on top, for instance, is a multifunctional flood defence. Houses with water-retaining walls, or parking garages in dunes are other examples. To be able to function as a flood defence, these structures have to be part of an entire flood defence system, like the 'dike rings' in the Netherlands. This means that the maintenance, inspection, control and the formalisation of acceptable safety levels have to be organised.

The combination of flood protection with other functions becomes an interesting option, if necessary improvement of existing flood defences conflicts with other functions, like housing. In addition, multifunctional flood defences can become a relevant option for ongoing urbanisation in built-on areas, requiring more space. Next to spatial optimisation, dividing the costs between several parties could be an attractive advantage of these combined structures. Governance issues related to multifunctional flood defences, however, are very delicate because of possible conflicts in responsibilities.

Their PhD-theses can be found at the repository.

More information about the research program can be found at www.flooddefences.org. 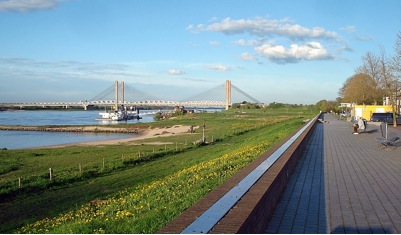 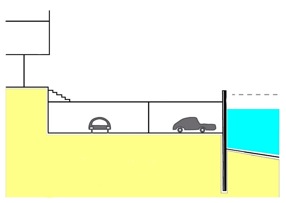 Cross section of a combined quay and parking garage in Zwijndrecht 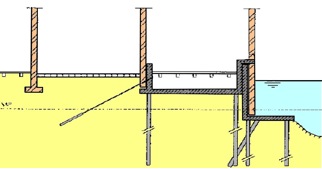 Cross section of a house in Dordrecht, combined with a flood protection function