Daniel Rosbottom (1969) has excelled for many years in combining academia and practice at an international level. He is an advocate of teaching through projects that look beyond the academy and, which “create a symbiotic relationship between practice and teaching”. As Head of the School of Architecture and Landscape at Kingston University in London, he worked with his students on design research projects that had a direct impact on the wider city, through collaborations with the office of London’s Mayor. At DRDH Architects, the firm he co-founded in 2000 with David Howarth, he has gained international recognition through competition winning projects, notably a concert hall and public library for the Norwegian city of Bodø, which has won multiple awards. His appointment at the TU Delft underlines the on-going international focus of the chair, which was previously held by his countryman Professor Emeritus Tony Fretton. It gives the Chair of Architecture of the Interior a distinctive British signature. “I have considerable empathy with Fretton’s position on architecture and his understanding of architecture as a social discourse as well as a material one,” says Rosbottom. “That is one of the reasons why I applied for the post. It is a huge advantage to have the opportunity to build from a common ground.”

In what sense is architecture a social discourse?

Architecture is a collective art; it is made for the citizen. Architects have responsibilities beyond themselves, to people, the urban realm, history and the future. Buildings should be good neighbours and good hosts. My interest is in thinking about the collective interior within the context of the wider city, reclaiming the idea that the interior as perhaps the most elaborated moment of architecture. It is the place in which we inhabit the city in the most intimate way, through which we understand it and from which the experience of it unfolds.

What do you want to build as a professor?

I have been initially appointed for five years and in that time I will be actively engaged in teaching and I will be leading the graduation studio of the Chair. However the post also gives me the opportunity to lead a discourse that considers the way in which contemporary cities are inhabited. Although the focus of the chair is on the interior, we will understand it as part of the wider context, taking on the mantle of Interiors, Buildings, Cities inherited from Professor Fretton. Paradoxically, that idea receded through the course of modernity, into an obsession with the gaze, the visual overcame more bodily understandings. I would hope to re-establish the broader relationship between different scales of experiences within the contemporary environment and a key goal for me is to engage those as part of a holistic experience. That seems particularly interesting in the Dutch context. In the spatial memory of the Netherlands as understood through its own visual culture, in particular painting, there is very much an idea of the city as an enfolding experience, understood from the scale of the citizen. Yet contemporary Dutch urban planners and architects often seem to consider the city only on the scale of infrastructure. Of course that is important too, but it ignores the habitat. The idea of the interior, and especially the public, collective interior has a very particular role to play.

The profession of architecture has lost touch with the habitat?

We have seen big changes in the past years: globalising processes, the economic crash, the need to think environmentally. It is time to reflect on what we have achieved, what we have made and what we have forgotten. What models can we use to evaluate the contemporary environments we have made and how can we take advantage of, or offer resistance to those globalising tendencies? Going back to the basic idea that the city is both within the realm of architecture and is a place where people live seems a good place to begin. As I have already said, the interior in particular needs to be understood as part of this experience, rather than something separate, fitted out after the fact.

Where can we see global influences threaten our public space?

You can see it in the loss of a sense of particularity. The interior as a continuous, non-place, as experienced in shopping malls, airports and other manifestations of it as universal condition. One of the challenges of my chair is to explore what the alternatives to these prevailing models might be. To think of it as a catalyst, a place to start.

How can we see these ideas about architecture and public space back in the work of DRDH Architects?

We are interested in working from the idea of the city and understand the buildings we make as part of the public realm. We have worked on a large range of building types, but we always try to think across scales and we have a consistent concern for issues of place and context. Before we start designing we ask ourselves: what makes a place particular?

Is that also true for the iconic concert hall you designed in the Norwegian city of Bodø?

Yes. The common thread in every project is the idea that buildings are part of the city and the interior is an integral part of the architecture. It’s quite a traditional perspective but we are quite sceptical of the newness and invention that drives much contemporary architecture, leading to buildings that are understood as objects and which are alien to their environment and the city that they are in. For us the interior is often the starting point. As for Bodø: in an environment that is inhospitable during the long winter months, our public interiors have become the de facto public spaces of the city for much of the year.

Education, publications and secondary employment
Chair of Architecture of the Interior

"The interior is a catalyst, a place to start" 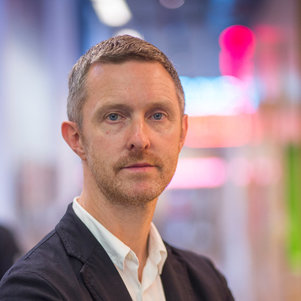