Nathalie de Vries is Professor of Architectural Design. She proposes to look upon the theme of public buildings as a collective knowledge source, and to produce output for the architectural community and beyond by furthering knowledge on how architectural design can contribute to pressing societal issues.

“Practice and theory should be considered inseparable,” says De Vries. “The design projects should form a solid educational core, but they should be self-evidently surrounded by a ‘body of knowledge and experience’ of the various teachers, offering elements, aspects and overviews. This helps to ensure that students are given foundations by providing access to recent developments in theory, practice, and history.”

During the first three months of her professorship, De Vries will focus on further defining her teaching assignment as a Professor of Architectural Design. She will explore a set of themes that are strongly related to the challenges that she encounters as a globally-operating practitioner. These themes are especially relevant for exploration in research and education. One theme, Multiplicity in Architecture, will investigate how buildings and building elements can get properties, that make them less singular in function, and more productive, transformative and resilient. Another, The Multiple as a building type, will study the mass production of buildings. It is important to investigate whether a majority of these buildings could be designed in such a way that they are more adaptable to change overtime. Within the theme of public buildings, De Vries will also work on examining how meaningful civic spaces and degrees of publicness in architecture can be realised in an era in which the mono-functional public building is disappearing.

Nathalie de Vries is an architect and urbanist. She graduated from Delft University of Technology in 1990. De Vries is director and co-founder of globally operating architecture and urban planning firm MVRDV, which she initiated together with Winy Maas and Jacob van Rijs in 1993. From 1 January 2021 she will head the Atelier Stadsbouwmeester of the municipality of Groningen. Nathalie de Vries has taught at several schools and institutions, including Harvard GSD, IIT Chicago, the Berlage Institute, TU Delft, and the Architecture Academy Arnhem and has been Professor of Architecture at TU Berlin (2002-2004). From 2013 until the summer of 2018 she was Professor at the Baukunstklasse of the Kunstakademie Düsseldorf. From 2005-2008, she was Chief Railroad Architect of NS/ProRail. Until 2019, De Vries was the president of The Royal Institute of Dutch Architects (BNA). 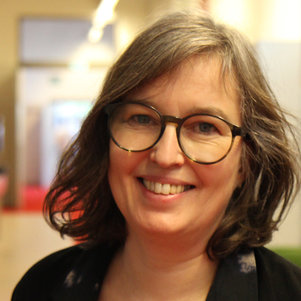