The planet is heating up. The oceans are filling with plastic. These are problems that will require huge, cooperative efforts to fix. Francesco De Fazio wanted to do his part. He discovered that just moving four screws on a vacuum cleaner could make a big difference.

Originally from Italy, Francesco came to Delft to study Integrated Product Design. “Everyone at The Polytechnic University of Milan knows about TU Delft,” he says, which is where he earned his bachelor’s degree. He wanted to improve his English and focus on sustainability issues, and he felt he could do both things in the Netherlands.

During his second semester Francesco set to work on the design of the Excelscope - a medical device which can detect malaria with the aid of a smartphone. He readily admits that he spent a lot of that period thinking that the challenge was too great: “It was a lot of pressure for someone who had designed toasters.”  The project went on to win the Dutch national James Dyson Award in 2018.

Being successful under that amount of pressure came in handy when he went on to his internship. Francesco knew that he wanted to work with a large company, where he felt he could have a bigger impact. And he knew he wanted to work with a Dutch company, which cared about sustainability. He landed a project with the largest and the most quintessentially Dutch company possible for an industrial design engineer: Philips.

While Francesco was worried about his workload in Delft, in Brussels the European Commission  was worrying about product repairability.

In autumn 2019, the European Commission, as part of its push to make Europe greener, implemented regulations that would require companies to make appliances longer lasting, both by extending lifespans but also by making them easier to repair. 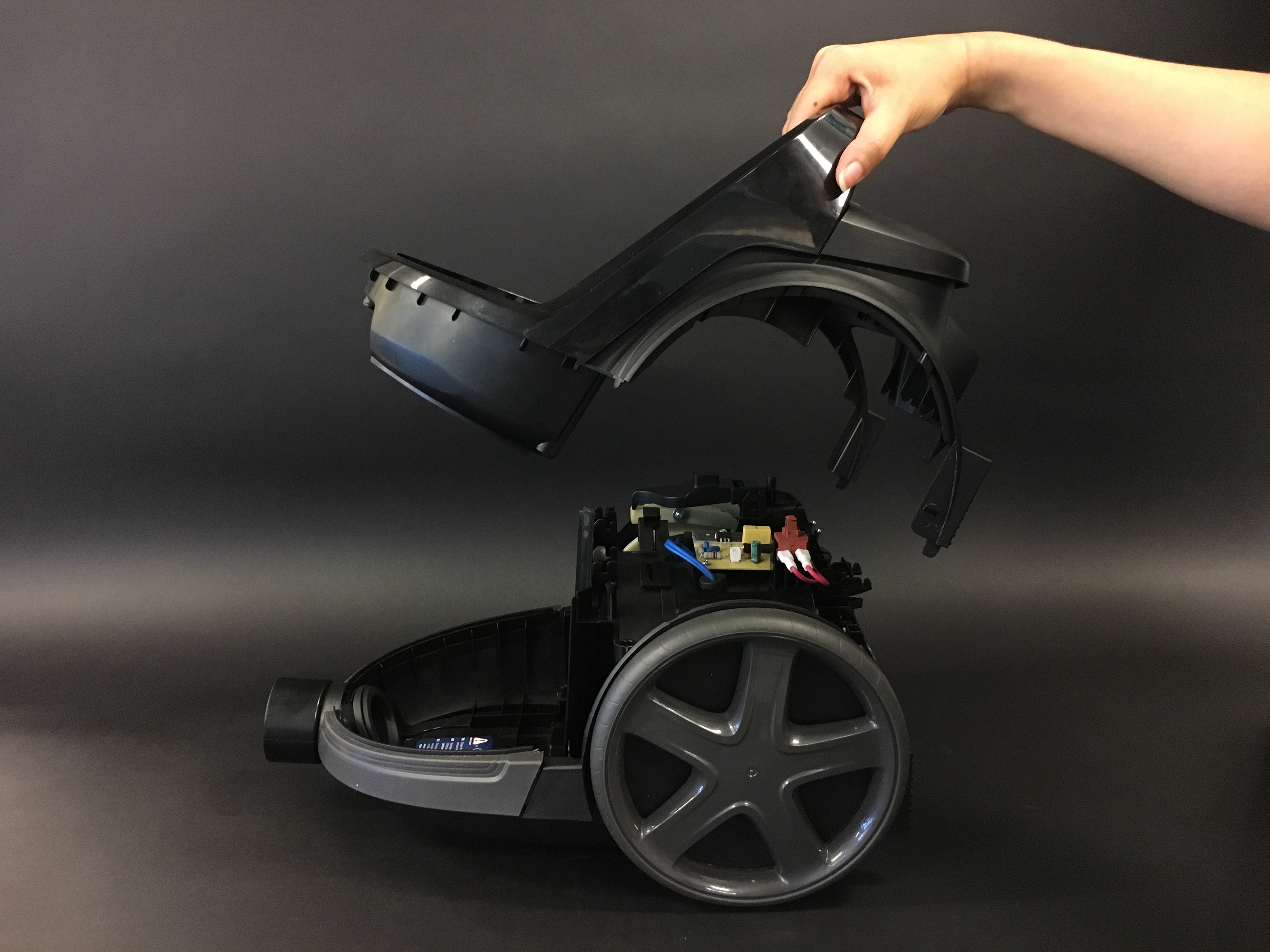 These so-called Right to Repair regulations will go into effect in 2021. They are accompanied by a scoring system for companies to determine how easy their products are to repair. The idea is that consumer products should be easier to fix.

“Together with smarter energy labels, our eco-design measures can save European consumers a lot of money, as well as help the EU reduce its greenhouse gas emissions,” says European Commissioner for Climate Action and Energy, Miguel Arias Cañete.

The problem goes beyond climate change. According to the Global E-Waste Monitor, in 2016, the world created 44.7 million metric tons of e-waste, which includes items like computers, smart phones and washing machines. Only about 20% of that is recycled, with the rest going to landfills or being incinerated.

As Francesco would discover, repairing something can be difficult to learn. In current product models, repair work is often time consuming and requires special tools. But surveys show that 77% of consumers in the European Union would like to repair rather than replace. Initiatives such Delft’s Repair Cafe reflect public enthusiasm for more of a make do and mend attitude.

Philips wanted Francesco to look at several products and assess them for their repairability, underneath the new European Commission framework. “I thought ‘This is exciting’ but I wanted to be able to propose a tangible redesign as well,” he says. He also had another request: that he be allowed to score non-Philips products so the company would also have a sense of how they stacked up against the competition.

Philips was receptive to the idea but wanted him to focus on the assessment. So, he found a highly ambitious compromise of sorts. He would get the assessment done in three months and then have three months to work on a redesign. “It cost me a lot of nights and weekends,” he admits.

In the end, he selected seven vacuum cleaners - four from Philips and three from competitors - for the first part of his project. There were no guidelines for the process of testing repairability, only a scoring system from the European Commission. In the process of his thesis, he documented his procedure. 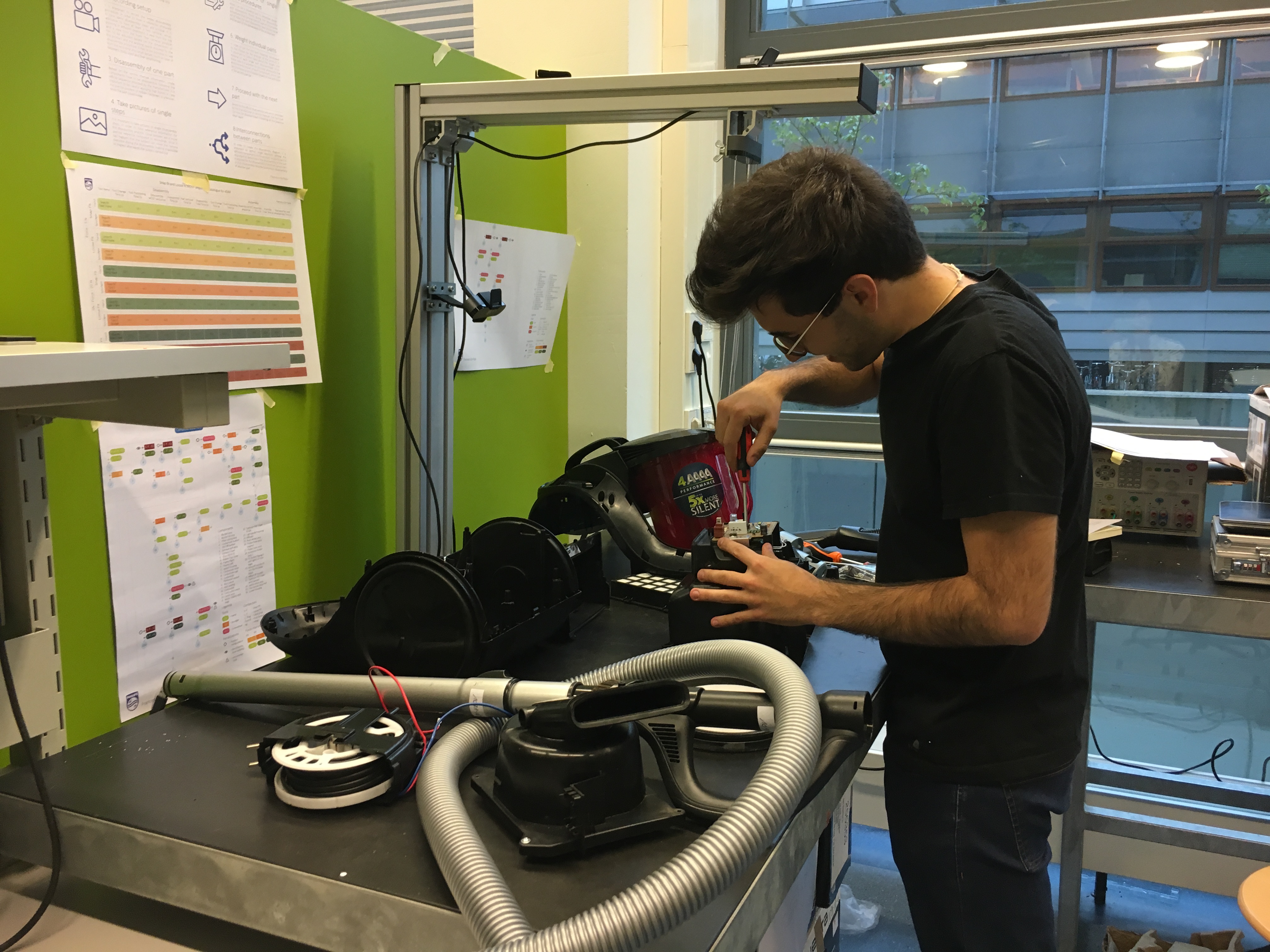 More than a sum of the parts

One of the most important takeaways from his research was his Disassembly Map. This allows someone to map the entire assembly and disassembly of the most important components. Francesco is currently working on an academic paper to document this process together with Professor Ruud Balkenende, which will show other companies and designers how they can do the same thing.

Some of the vacuums were extremely complicated to take apart, requiring multiple tools and an extensive series of steps. Others, Francesco describes as “beautiful.” One vacuum he looked at only required the removal of three screws to access the main components.

The analysis required him to disassemble and reassemble the same vacuum multiple times. He watched a lot of YouTube videos of people online disassembling vacuums to get a feel for how it was done. “There are a lot of Russian-speaking men who do this for some reason,” he says. Francesco figured out what parts were most critical and which were the most likely to break and how many steps it took to access them.

Even though Philips only requested the assessment, he wanted his thesis to be about something more. The existing product design approach at Philips only partially considered repairability as part of the process. Francesco thought that if he could demonstrate the impact of a simple solution, he could convince them to put repairability as a central consideration in the design process.

“Every change came with a problem,” he says. He would come up with what he thought was a simple solution, only to be told by someone else in the manufacturing chain that making that adjustment would unleash tremendous issues. As Francesco found out, vacuums must do more than being effective at removing dirt from your floor. They must, like most consumer appliances, meet safety standards. They must be able to be manoeuvred in certain ways. They can’t weigh too much. And, of course, production costs must be kept low.

Using his Disassembly Map, he eventually figured out several solutions. One, however, was remarkable in its simplicity. By merely adjusting the position of four screws in the casing of one vacuum model, the entire external case of the Philip’s vacuum could be removed in a single step. In the current design, it took seven steps. 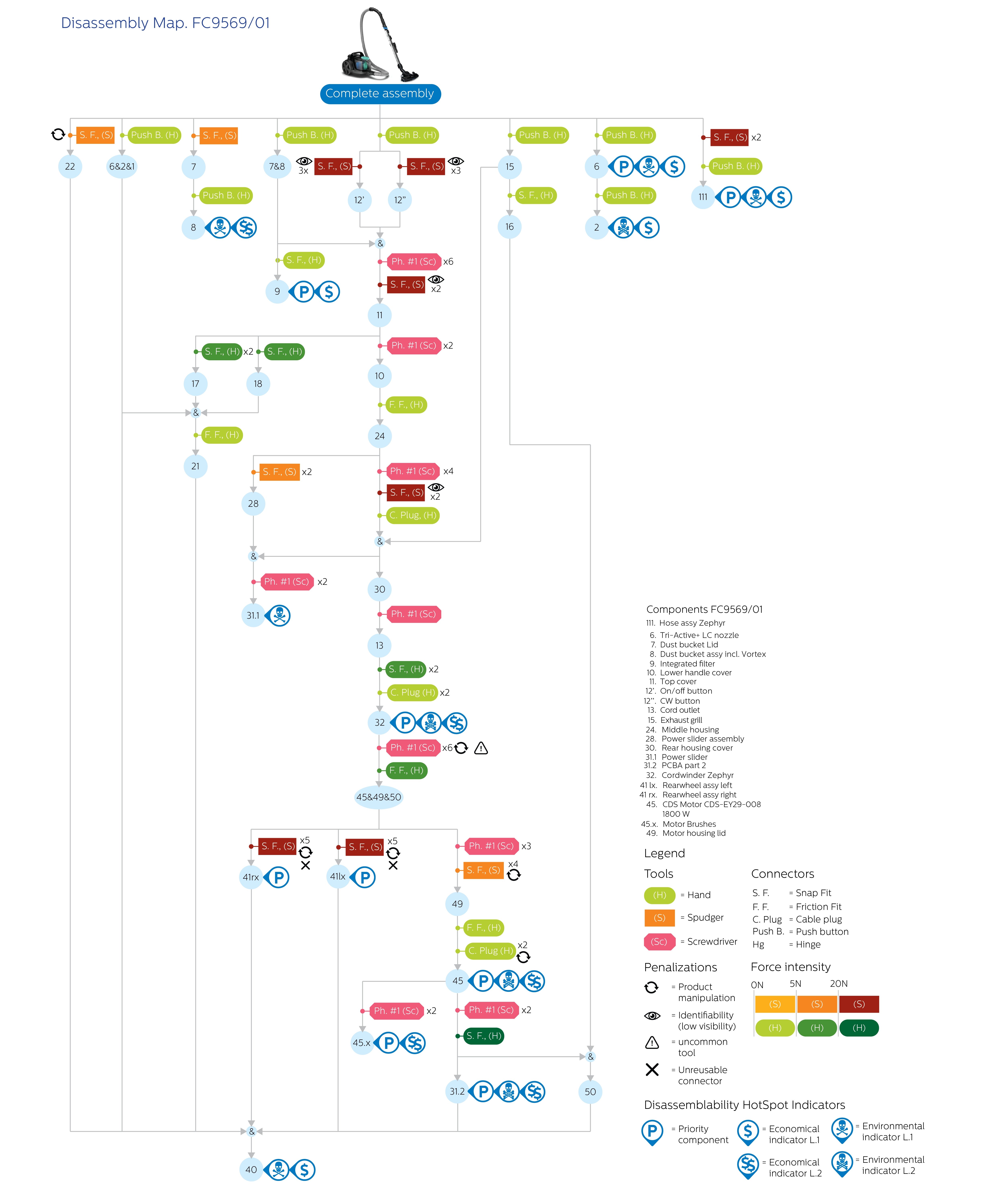 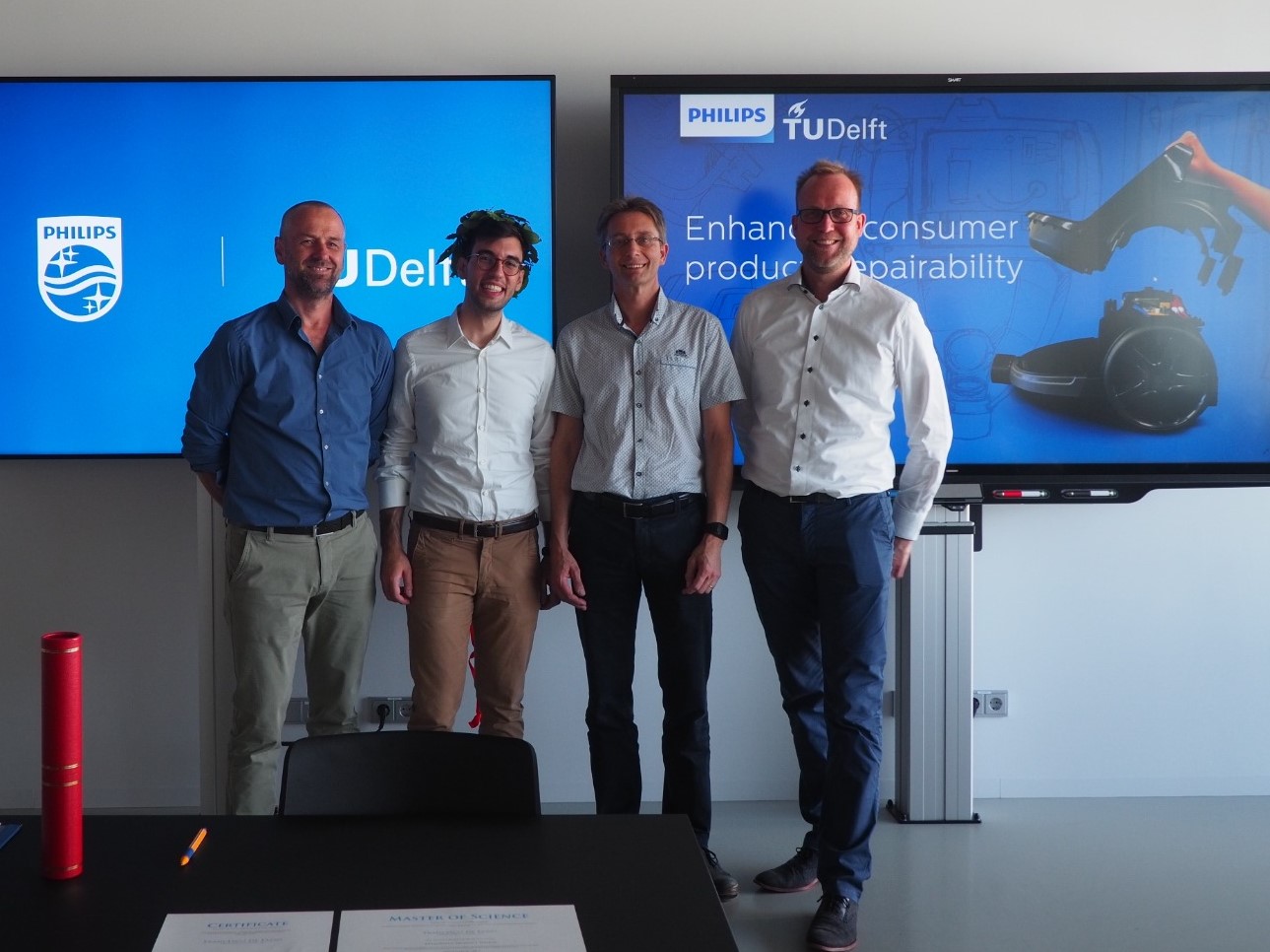 “Francesco's work is outstanding because it combines a thorough research approach with real-world impact. Not only did he make an extensive analysis of the repairability of 7 vacuum cleaners, leading to a new design tool; he also convinced Philips of the need to take repairabiltiy into account in their vacuum cleaners.”
- Professor Conny Bakker

The easier it is to get to the main components; the faster and easier products can be serviced. Francesco prefers to use the term “serviceability” rather than “repairability,” since the goal is for companies, or certified repair persons, to fix them, not the consumers.

After taking all those vacuums apart over and over, repairability is now something that de Fazio considers when buying new products. “But it’s really difficult for the consumer to know, how easy or hard it is to repair something. Unless you can find someone on YouTube who has already done it.” He would love to see mandatory labeling on products to show the level of difficulty in disassembly.

Perhaps that’s a problem Francesco can work on his new role. Philips was so happy with de Fazio that they created a new position for him, as a Circular Product Designer, which he started in January 2020.