Research in underground construction has focussed on the process of constructing diaphragm walls, following incidents with leaking diaphragm walls during the construction of the North-South metro line in Amsterdam. The research includes detailed numerical and experimental modelling of the flow of bentonite in the slurry-filled trench and its subsequent replacement by concrete. This has been supplemented by field observations during the construction of diaphragm walls at the site of the new railway station in Delft. Additionally, several geophysical measurement techniques (including tomography and electrokinetic measurements) have been adapted to find bentonite inclusions and locations at risk of promoting leaks in the diaphragm walls at Delft station. Both research projects are incorporated in the national Geo-Impuls research programme and updated design guidelines and cross-hole sonic defect detection techniques have already been implemented in recent construction projects, such as at Delft station and the A2 highway in Maastricht.

Current research in tunnelling deals with the interaction between the Tunnel Boring Machine (TBM) and the surrounding soil, and indirectly with surface constructions. It uses actual monitoring data, from the Hubertus tunnel in The Hague and the North-South metro line in Amsterdam, to describe the kinematic behaviour as the TBM moves through the soil. The research forms the starting point for a new project aimed at reducing the required cover for TBM driven tunnels in very soft soils.

In 2011, the unit Geo-Engineering led a successful top-ranked proposal (with partners TNO and NRG) for researching the feasibility of the Dutch Radioactive Waste Repository Concept. The project developed a reliability-based approach combining analytical techniques, finite elements and probabilistic methods such as Monte Carlo simulation and the First Order Reliability Method (FORM). By analysing the excavation and construction of tunnels and galleries, as well as pre- and post-closure scenarios, within a probabilistic framework, the research highlighted influential design parameters requiring further in-depth investigation. In 2014, agreement was reached on further research, in particular relating to the design and construction of tunnel crossings, and utilising new laboratory data obtained by the British Geological Survey (who have joined the consortium team). There are plans for further laboratory-based research funded by COVRA.

The section Geo-Engineering is one of the knowledge partners within the Centrum Ondergronds Bouwen.

The design of piled embankments and, in particular, the load transfer in geosynthetic reinforced embankments was researched using experiments and monitoring data from field projects. Simulations with analytical as well as numerical models were performed. The work of Van Eekelen got significant recognition in the scientific community, including several prizes. Her paper (Van Eekelen et al., 2011) can be found in the international journal Geotextiles and Geomembranes. 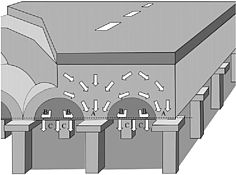 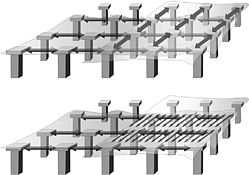