Linda Plaude is lecturer at at the Faculty of Industrial Design Engineering. Her main interests are textiles and Smart Textiles.

Linda Plaude was born in Riga, Latvia. In her home country, she was always involved with creative expressions and went to an arts-oriented secondary school, where she was introduced to different types or arts disciplines. Since a young age she also was actively practicing Ballroom dancing and participated in dance competitions.

She moved to the Netherlands at the age of fourteen. Linda finished highschool (VWO) in Den Burg, Texel and moved to Amsterdam to study Fashion Design at the Amsterdam Fashion Institute (AMFI).

During her studies, Linda followed the minor iNDiViDUALS - AMFI's own fashion label providing a 'reality school' experience for the students. Together with a team consisting of Fashion & Management, Fashion & Branding and Fashion & Design students, she developed the s/s 2015 womenswear collection, containing a number of unisex-pieces as well. The collection was produced in an atelier in China and the clothing was sold in the Amfi flagship store at Spuistraat in the center of Amsterdam.

In the 4th year of her studies, Linda did her 6 month internship at "Iris van Herpen Couture" where she spent 5 months working on the re-make of the most complex and time consuming couture piece, called the "Mirror Dress" from the s/s 2013 Voltage collection. It is a fully hand-crafted 3D mosaic made from triangle-shaped mirror plastic. This dress was part of the selection of highlights of her haute-couture pieces from her entire career and needed to be re-made for her solo exhibit, since the first version was sold. IvH exhibit: “Iris van Herpen: Transforming Fashion”, travelled through different museums in North-America, premiering in Atlanta’s High Museum of Art.

Next to that, Linda worked on a laser-cut dress for IvH s/s 2016 collection "Quaquaversal". Linda joined te IvH team during the Paris Fashion Week backstage where the dress was shown and she also actively participated in the fitting-sessions in the showroom where buyers were selecting ready-to-wear pieces of the collection to sell in their shops allover the world.

When Linda needed to start on her graduation collection, she was very inspired by Iris van Herpen's courage to 'do it differently'. This was something that Linda always wanted to do, but it did not quite seem fit in the curriculum of her studies and remained only a desire until the final year. Linda always wanted clothing do be something more than just clothing. Linda was wondering: "How could clothing serve us in the future? Could it possibly feel what we need and could be able to give it to us? ".

Linda took this idea and dived into a, to her so far unknown, field: interactive technology incorporated in clothing. Her teachers were open-minded and allowed her to take this unconventional path in her final phase of her studies. With the support from "Fashion Technology Lab"" and "Makers Lab" of Amsterdam University of Applied Sciences (HvA), she did research in light conductive materials and incorporation of electronics in textiles, in a way that the technology was invisible from the outside. By this experimental research project, Linda wished to portray the human body as an energy system that can be re-charged and brought back to balance through entrainment, rather than something made from flesh and bones only. In her concept she addressed the co-relation of colour- and sound frequencies and the body energy centers, the so called chakra's. During the graduation showcase, she developed a real-time, interactive performance whereby sound frequencies were activating the co-responding coloured lights in the garments.

To make this project possible she had to self-learn basics of electronics and apply that directly in her graduation prototypes. She collaborated with sound designer Alberto Caruso from Studio for Electro-Instrumental Music (STEIM) and computer programmer Jānis Lācis, living in Riga, Latvia. This graduation project was a start of her passion for clothing and technology and her adventure of designing in a cross-disciplinary setting, something she believes is the future of creation.

Lectures and/or coaches students on:

Involved in the research project(s):

A project focusing on cooling strategies for the Dutch Olympic team.

New and innovative solutions for clothing which can actively control our body temperature.

A program focusing on injury prevention in sports. 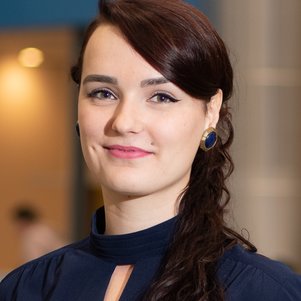