Games that are always a success

After a long day at work, you somehow force yourself to go to the gym for some valuable exercise. Our sense of ‘get-up-and-go’ (thankfully) often has the upper-hand over our passive inclinations. But this does not hold true for elderly people suffering from dementia: their ability to take the initiative disappears in the early stages of the illness. Simple activities like getting up to make a cup of coffee, opening a newspaper or starting a conversation become an enormous struggle. And this results in a dreadful vicious cycle: unused muscles and joints become stiff, and a brain that does not do anything deteriorates even more rapidly. With her innovative design, Hester Anderiesen Le Riche – PhD candidate at the faculty of Industrial Design Engineering (IDE) – helps elderly people to break out of this cycle.

Hester Anderiesen Le Riche had always been passionate about health and exercise. During her graduation project at the faculty of IDE, she met neuropsychologist Erik Scherder. He told her how important it is for people with dementia to exercise, and why those with dementia become passive so rapidly. The question soon followed of whether Hester could put her designer’s brain towards developing a solution. Something to help people with dementia to escape this passivity. ‘That matched perfectly with my personal field of interest: that of offering people for whom physical activity is no longer a matter of course the opportunity to reap the benefits of exercise’, Hester explains enthusiastically via Skype from her home in Cape Town. ‘And within an hour, we had decided to take the issue and build it into a doctoral research project’. On 24 April, Hester will defend her dissertation entitled Playful design for Activation at TU Delft. 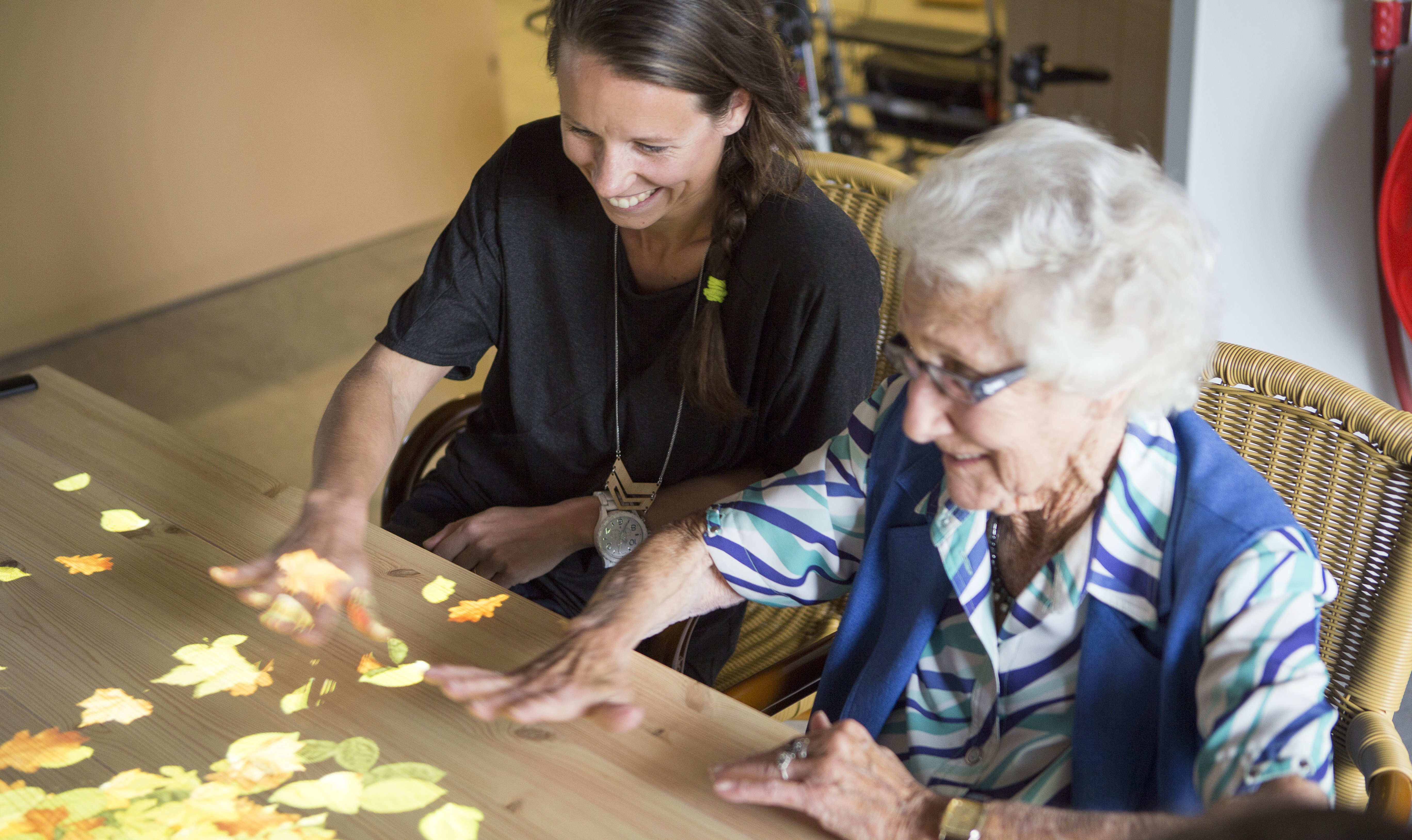 This research resulted in the Tovertafel (Magic Table); a projector positioned above a table that projects interactive light patterns and images onto the surface of the table. Infrared sensors detect the hand movements made by users seated at the table, allowing them to ‘play’ with light. It has been a roaring success. With her company Active Cues, Hester is now supplying the Tovertafel to nursing homes throughout the world.

But it all started with science. ‘I soon realised that the lack of physical activity is only one element of what is known as “apathy” in medical literature’, says Hester. ‘Alongside physical inactivity, apathy also encompasses social inactivity and emotional ‘emptiness’ – the lack of emotions. What we aim to do is break through this apathy, and there are various ways of doing so. My research is focused on people in the final stages of dementia, but even here, there is a great deal of variation regarding what people are still capable of. Perhaps someone can hardly move, but if they noticeably take pleasure – however brief – from interaction with others, or if a memory from earlier in life can evoke an emotion, you also break through the apathy. And even that is a triumph’.

Hester completed three academic studies to gather sufficient information in order to begin the design process. ‘I approached these studies directly from a designer’s perspective, focusing on the user’, explains Hester. ‘It involved a systematic literature study into which physical elements in nursing homes contribute – or are detrimental – to the physical activity of elderly people with dementia. I also conducted a lot of questionnaires, interviews and observations in nursing homes in order to ascertain how social interaction in health care institutions contributes to, or is detrimental to, physical activity’.

After 18 months, Hester began collaborating with CRISP (the Creative Industry Scientific Programme, a major partnership involving the scientific field and the creative industry, supported by the Dutch government, ed.). Through CRISP, Hester joined a group that researched how game elements can contribute to behavioural change. ‘Together with the group, we explored which aspects of a game – elements such as competition, imagination or exploration – can still be experienced by people suffering from various stages of Alzheimer’s. I decided to concentrate on people in the final stages of the disease. I established that with this group, you only have three game elements at your disposal: sensory stimulation (light and sound), relaxation, and reminiscence (memories from earlier in life). Other game elements are no longer applicable for this group. That sounds restrictive, but it actually helped to focus the design process’. 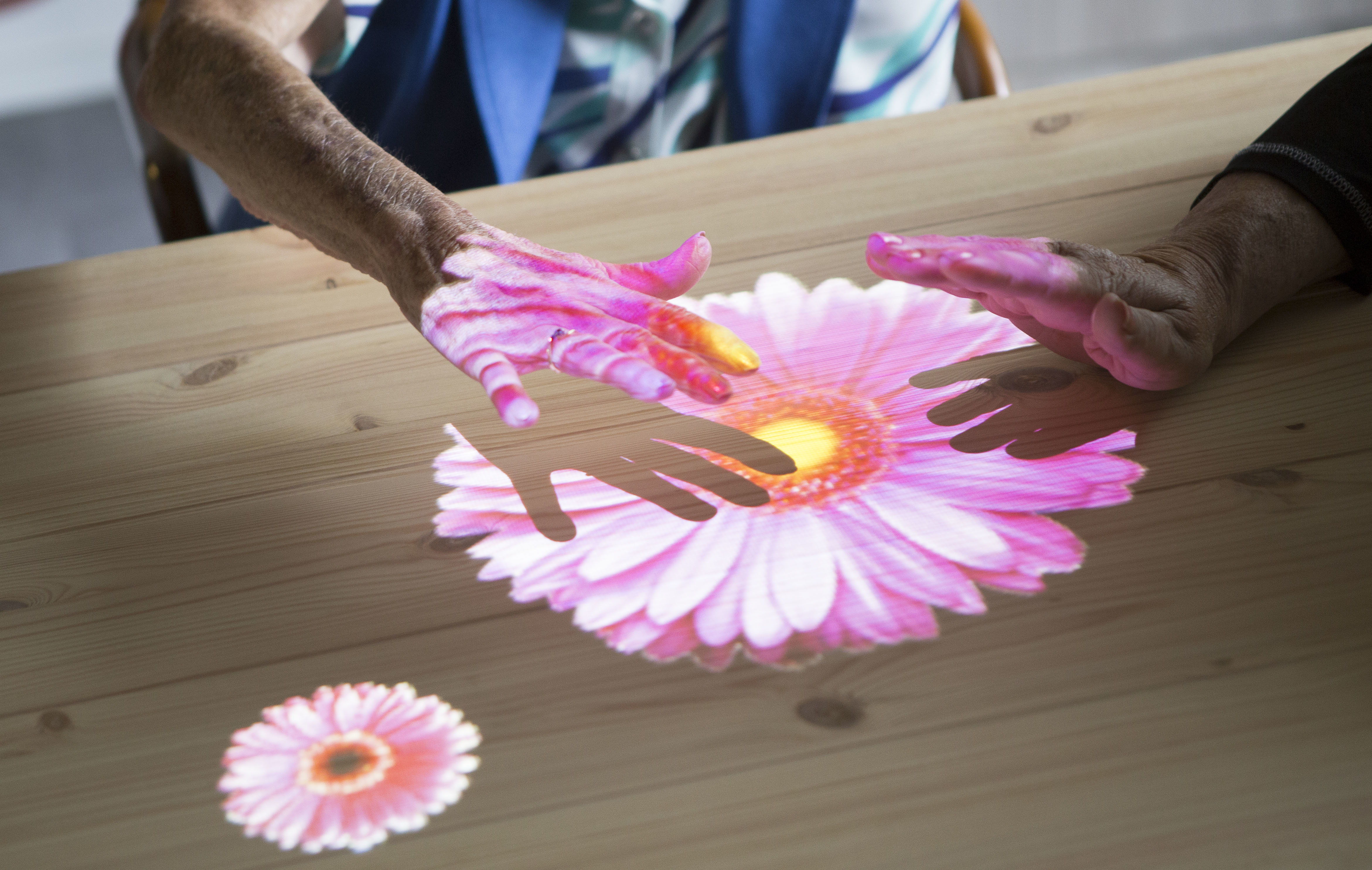 Armed with this knowledge, Hester finally got down to designing. She started a co-design process – a unique concept considering the user group consisting of people in the final stage of dementia. Hester initially tried to use light effects to remind residents that they were engaged in a certain activity: drinking coffee, for example. However, she soon noticed that people reached for the light itself, rather than their coffee cup. ‘Once we realised this, we got rid of the coffee cups and started spontaneously playing with light, together with the residents. We were able to respond directly to the residents’ actions. Certain elements of a standard co-design process obviously do not work with this type of user. Paper-prototyping, for example, as these people simply do not recognise images on paper. The co-design process resulted in a range of new insights. But naturally only in relation to the group with which I worked – the group in the final stage of dementia’.

Collaboration between the creative industry, academic institutions and the professional world helps to create great things

Hester explains that purely focusing on these three game elements ensures that the Tovertafel really can't go wrong. ‘The games always produce a response of some sort, it works every time. The response could be an intuitive tap on a projected beach ball or completing a saying. It all gives them an enormous sense of achievement. After all, on a daily basis, they encounter things that they can no longer do. That is frustrating and distressing. So if they are suddenly able to actually achieve something, everyone becomes happy and enthusiastic. And that also contributes considerably to social interaction in a nursing home’.

Hester has now progressed to applying the expertise gained during her doctoral research to other target groups – for example, a Tovertafel designed for children affected by grave forms of autism. This version has a completely different purpose to the Tovertafel for people in the latter stages of dementia. In contrast to elderly people, children can enjoy game elements such as competition. ‘Now that we are also developing games for other target groups, it is becoming even clearer to me what precisely works for elderly people with dementia, where there is overlap, and what does not work at all. I think that this is an exciting area in which to conduct a lot more additional research – research that will of course see us continue to collaborate with health care professionals and the target groups themselves. Working together to explore what works, and trying new things together. That is the CRISP concept of collaboration between the creative industry, academic institutions and the professional world – an approach that we are aiming to stick to. I think that it certainly helps us to create great things’.

On Monday 24 April, Hester Anderiesen Le Riche will <link evenementen io promotie-hester-anderiesen-le-riche _blank>defend her thesis ‘Playful design for Activation - Co-designing serious games for people with moderate to severe dementia to reduce apathy’. The defence will take place at 15:00 in the Aula of the TU Delft. The Laymen’s talk starts at 14:30.