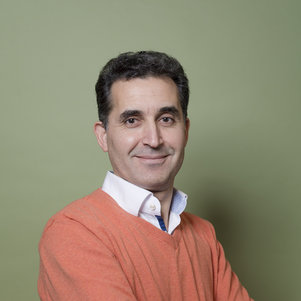 Is it memory? Is it a processor? No, it’s both and super-efficient!

Emerging applications for Internet of Things devices – such as personalised healthcare, augmented reality and artificial intelligence – require vast computational power to be integrated into the device itself, but at only a fraction of the energy consumption attainable with current computer architectures. Researchers of the MNEMOSENE project# provided a proof-of-concept of an ultra-low power Computation-in-Memory architecture – a feat for which overall project leader Professor Said Hamdioui was recently presented the prestigious European Union ECS Innovation Award 2020.

The cost of not-computing
Your laptop, cell phone, smart watch and even your pacemaker (if you have one) all have a central processing unit and separate memory. This computer architecture is so ubiquitous that you may easily assume it to be optimal and therefore future proof. Not so.

Leakage currents within its processor and memory continuously lead to a waste of energy, even when the device is turned on but inactive. Above all, moving data from and to off-chip memory costs about a thousand times more energy compared to actually performing a computation within the central processing unit. ‘It is like flying first class to New York City only to buy a one-dollar piece of candy,’ Hamdioui says. All these energy losses put a limit on how smart IoT devices can become and on how long they can perform their tasks on a single battery charge.

A new computing paradigm
To drastically increase computational efficiency, in number of calculations per total energy used, a new computing paradigm is needed. This is a core research topic within the group of Hamdioui at TU Delft. He already holds a patent on the basic principles of combining novel memristor technology with the concept of Computation-in-Memory, which has the potential to increase this efficiency up to a hundred-fold compared to conventional architectures. The aim of the three-year MNEMOSENE project, funded within the Horizon2020 program of the European Union, was to provide an experimental proof-of-concept of this architecture as well as validation of its potential.

Memristors are the enabling technology
Memristors – a contraction of the words memory and resistor – are nano-scale electronic components that retain their stored data even when not powered. Having no leakage currents, power loss in an inactive device is reduced to almost zero. More importantly, memristors allow a novel computer architecture, called Computation-in-Memory, in which computational tasks are performed within the memory itself. For instance, rather than fetching A and B from memory to perform an addition in the central processing unit, you simply instruct the memory to provide A + B. Other computational operations can be integrated into memory as well. They can even be applied to whole arrays of data at once, enabling massive parallelism and saving a lot of energy otherwise spent on moving data back and forth.

ECS Innovation Award
The MNEMOSENE project team built small prototypes of Computation-in-Memory based on memristors. As the architecture is fundamentally different than traditional ones, the researchers had to develop new methods for circuit design and, subsequently, new programming models and new compilers for the novel chip architecture. Proving their breakthrough technology to not only be feasible, but also able to deliver on its promises, rightfully earned them the ECS Innovation Award – a prize awarded to the most innovative idea developed under a Horizon 2020 project in the field of Electronic Components and Systems.

Leading in unconventional computer architectures
Hamdioui expects that it will take another ten years to develop a fully operational Computation-in-Memory computer. ‘It is definitely worth the effort,’ he says, ‘as it will fuel important societal changes such as personalised healthcare. It will also be a major step towards computers that emulate the neural structure of the brain as memristors are very good devices for modelling synapses. We believe we can put Europe in a leading position when it comes to unconventional computer architectures.’