QuTech has resolved a major issue on the road towards a working large-scale quantum computer. QuTech (a collaboration of TU Delft and TNO), together with Intel, has designed and fabricated an integrated circuit that can operate at extremely low temperatures when controlling qubits, the essential building blocks of a quantum computer. This paves the way for the crucial integration of qubits and their controlling electronics in the same chip. The scientists have presented their research during the ISSCC Conference in San Francisco.

“This result brings us closer to a large-scale quantum computer which can solve problems that are intractable by even the most powerful supercomputers. Solutions to those problems can make a strong impact on everyday life, for instance in the fields of medicine and energy,” said team lead Fabio Sebastiano from QuTech and the Faculty of Electrical Engineering, Mathematics and Computer Science. 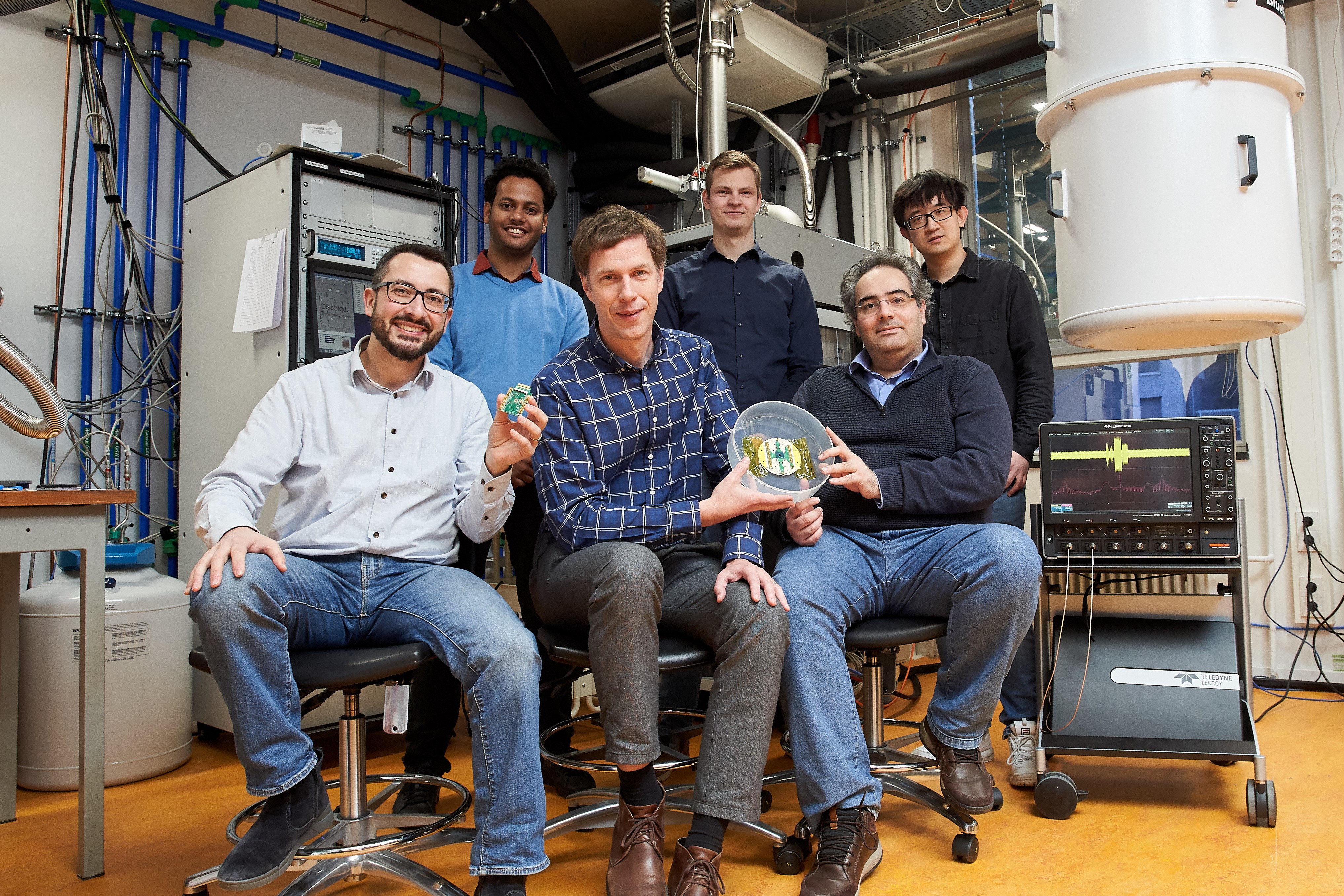 The team in the lab next to the cryogenic refrigerator hosting the qubit and Horse Ridge. The Horse Ridge output is visible on the screen on the bottom right. From top to bottom, from left to right: Bishnu Patra, Jeroen van Dijk, Xiao Xue, Fabio Sebastiano (holding the qubits), Lieven Vandersypen, Masoud Babaie (holding Horse Ridge). (photo: Ernst de Groot voor QuTech.)

“There are many issues to be resolved before we have a working large-scale quantum computer,” said Sebastiano. “The quantum information stored in qubits can rapidly degrade and become unusable unless qubits are cooled down to temperatures very close to absolute zero (-273 degrees Celsius, or 0 Kelvin). For this reason, qubits typically operate inside special refrigerators at temperatures as low as 0.01 K, controlled by conventional electronics working at room temperature.”

One wire is required to connect each qubit to the control electronics. While this is feasible for the small number of qubits now in operation, the approach will become impractical for the millions of qubits required in useful quantum computers. “It would be equivalent to taking the 12-megapixel camera on your mobile phone and trying to individually wire each of the million pixels to a separate electronic circuit,” said Sebastiano. “A more viable solution is to operate the electronics controlling the qubits at extremely low (cryogenic) temperatures, so they can be placed as close as possible to the qubits.” 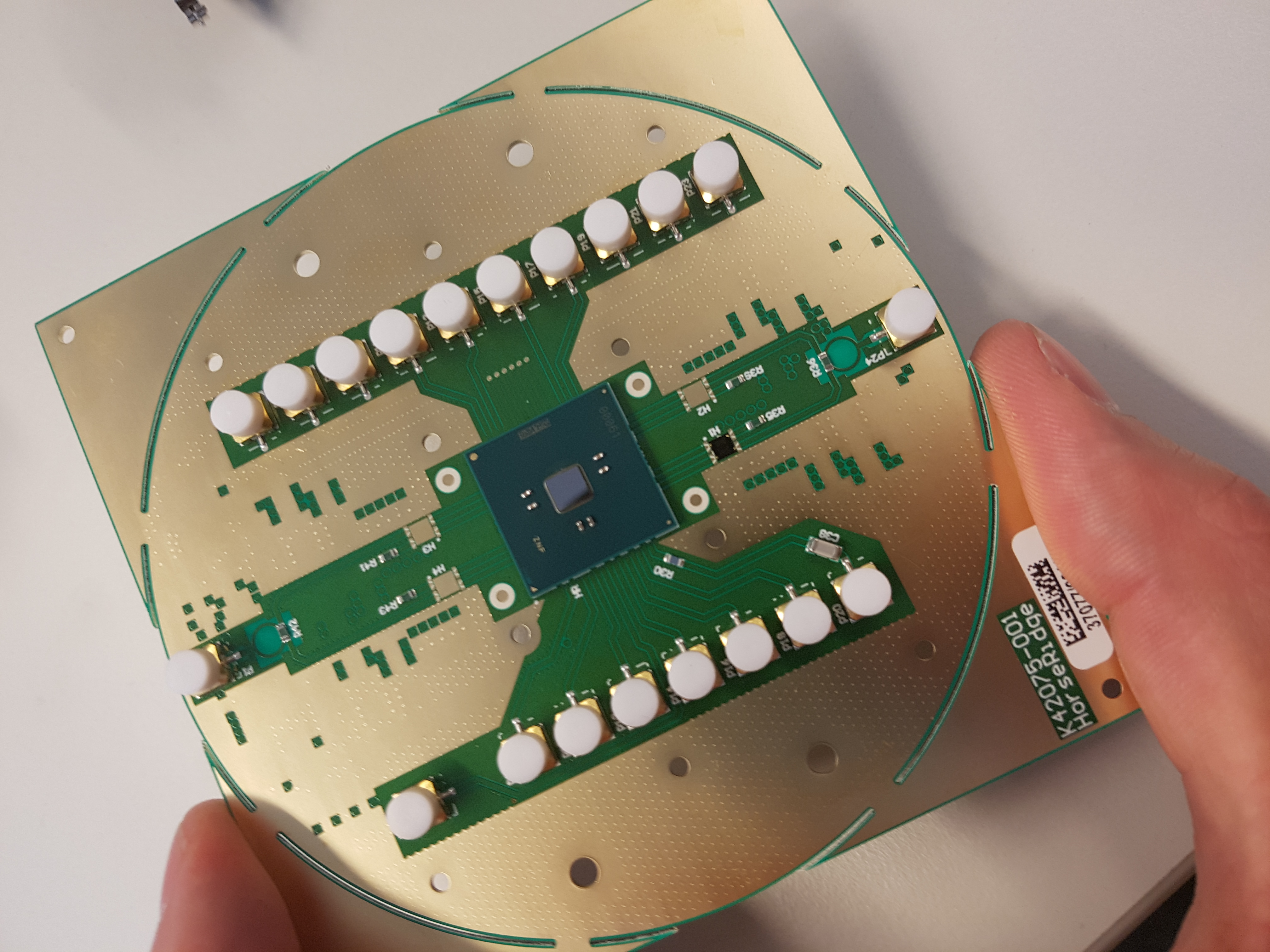 Horse Ridge mounted on the board ready to be installed in the cryogenic refrigerator. Photo: QuTech

QuTech teamed up with Intel to address this precise challenge. The result is called Horse Ridge – an integrated circuit named after one of the coldest spots in Oregon. Sebastiano: “We have designed and fabricated a CMOS integrated circuit able to control up to 128 qubits, which can operate at 3 K (-270 °C) and can therefore be described as a cryo-CMOS circuit.”

The researchers demonstrated experimentally both proper operation of the integrated circuit and an ability to drive a real spin qubit. Spin qubits are among the promising qubit candidates for a large-scale quantum computer. Sebastiano: “This is the most complex cryo-CMOS circuit ever demonstrated, and the first capable of driving a spin qubit.”

The next challenge is to close the remaining temperature gap. “Spin qubits are expected to function at slightly higher temperatures than is achieved now, say above 1,5 K,” said Sebastiano. “Our cryo-CMOS circuit now works at 3 K. If we can bridge this temperature gap, we could integrate both qubits and their controlling electronics into the same package or chip, thus achieving an extremely compact system.”

The International Solid-State Circuits Conference is the premier forum for presenting advances in solid-state circuits. The paper and the presentation at ISSCC specifically describe the Intel 22-nm FFL FinFET cryo-CMOS controller that operates at 3 K over the wide band from 2 to 20 GHz and is able to drive up to 128 frequency-multiplexed spin qubits or transmons in a 1-GHz band. Qubit fidelity and performance are maximized by optimizing the generated output waveforms. Such extreme flexibility is enabled by the digitally-intensive architecture comprising a 180-kB SRAM for envelope storage, a digital polar modulator, a 1-GSa/s 10-bit I/Q DAC and a wideband RF front-end. For more information about the technical specifications of the cryo-CMOS controller, please refer to this fact sheet by Intel.

The researchers are also already working on expanding the functionalities of their cryo-CMOS electronics. In pursuit of this goal, they will also present at ISSCC the world’s best-performing cryo-CMOS frequency generator, which will be integrated into future versions of Horse Ridge to achieve an even more compact electronic controller.